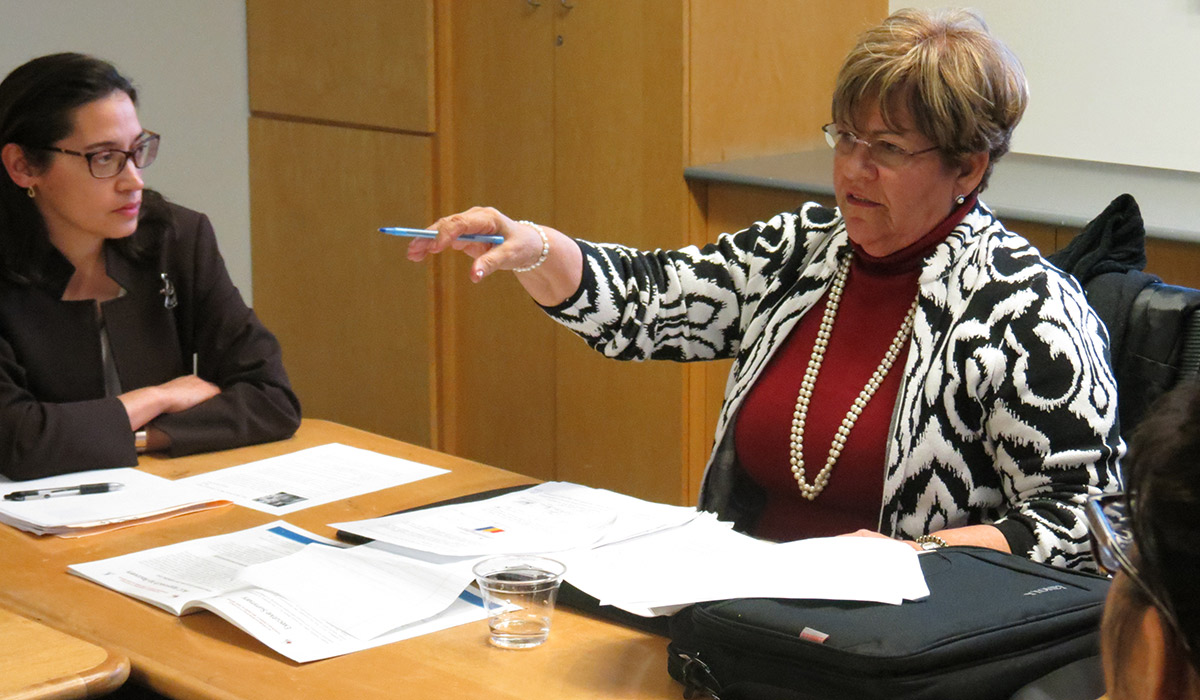 Sixteen months after Hurricane Maria became the deadliest storm to make landfall in Puerto Rico in 85 years, the island territory still finds itself in the midst of a long and painful recovery process, according to Puerto Rican Mayor Maria Meléndez Altieri.

Meléndez Altieri is in her third term as mayor of Ponce, which is Puerto Rico’s second largest city. She talked about her experiences following the storm during a roundtable discussion entitled, “A Year after the Hurricane: The Trials and Triumphs of Post-Maria in Puerto Rico.” The Jan. 23 talk was sponsored by the University’s Latin American and Latino Studies (LALS) program.

Meléndez Altieri began her talk by discussing the early days following Hurricane Maria, when her staff would meet each morning at 7 a.m. before dispersing around the city to assess the community’s most striking needs. Among the most urgent early tasks, she said, were opening roads, hospitals, and the airport.

Even though the island territory has previously experienced many hurricanes without great issue, the pre-existing hurricane plans proved to be no match for Maria, a category 4 storm with winds that reached 155 miles per hour.

“The first 115 days were awful for us,” Meléndez Altieri said. “Houses were completely destroyed, but we couldn’t stop serving the people. We had to give the people water and food, and electricity.”

Though the territory did receive supplies and support from outside benefactors, many of the shipments remained stuck in the Port of San Juan, with no means for distribution throughout the island.

“We had satellite phones, but they didn’t work,” she said. “The telecommunications systems were gone, and after 10-15 days with no electricity, most generators broke down. Everything collapsed, there was no money in the banks, gas lines were 10 to 12 hours long, and there were a lot of complex issues.”

In the months since the storm, Meléndez Altieri said she has been pleased to see businesses recover and tourism pick up. She is grateful for the help Puerto Ricans received from people and organizations outside of the island, but she also knows that much damage remains.

One major problem is the many blue-tarped houses which sit vacant and unlivable. Another challenge lies in the vast numbers of Puerto Ricans who have moved away, leaving the country in dire economic shape. Some of these departures pre-date the hurricane, resulting from the territory’s decade-long financial crisis. Others are the direct result of lost job opportunities following the storm’s devastation.

Meléndez Altieri estimated that around 350,000 people have left Puerto Rico. “We hope they are coming back,” she said.

A major issue that hampered recovery efforts, she believes, is Puerto Rico’s status as a United States territory, rather than a state. Compared to the recovery efforts seen in Houston, Texas, after Hurricane Harvey one month earlier, Puerto Rico received significantly less relief funding and government support, she said.

Speaking with Meléndez Altieri during the discussion was attorney Gregorio J. Igartua, a lawyer who is passionate about fighting for Puerto Rican statehood. He stated how Puerto Rico’s 3.4 million citizens benefit less from government programs and aren’t allowed to vote for president, despite paying payroll taxes to fund Social Security and Medicare.

“I would like a fair and equitable and dignified treatment, and we don’t have that kind of treatment in Puerto Rico,” he said. “All American citizens have an obligation to incorporate Puerto Rico and help us fight this fight. We are an island, far away, and we don’t have proper representation, so sometimes people forget about us. But when Congress passes a law, we are affected just the same even though we don’t have the ability to speak up.”

Sandra Barrueco, director of the LALS program and a faculty member in the Department of Psychology, said the event was a great opportunity for students of all majors to speak directly with a mayor in open dialogue. Speaking after the lecture, Barrueco encouraged students to consider how their precise areas of study and their skills could be used to support Puerto Rico’s relief efforts. These endeavors will build on a long history of research, teaching, service, and training collaborations with Puerto Rico by the faculty, students, and staff at The Catholic University of America.