What Should the U.S. Do About Iraq?

V. Bradley Lewis , associate professor, philosophy, was quoted in a June 25 National Catholic Register article about U.S. involvement in Iraq as fighters from the Islamic State in Iraq and Syria advance across the country.

Asked to provide a moral framework to address the question of U.S. intervention in Iraq, V. Bradley Lewis, an associate professor of philosophy at The Catholic University of America's School of Philosophy, noted that traditional just-war teaching offers a useful approach for assessing the morality of U.S. military intervention in Iraq.

Just-war teaching provides an ethical framework for considering a range of questions that must be addressed before a nation responds to unlawful aggression by a foreign power. Such deliberations include scrutiny of the justification for war as well as the means used to achieve military objections. Just-war principles call on political leaders to exhaust all non-military options before considering military solutions, for example.

Pope John Paul II and many other Church leaders opposed the 2003 U.S. military intervention in Iraq, on the grounds that it did not meet the criteria for a just war.

Lewis cautioned, however, that 21st-century conflicts often pose special challenges to the application of just-war criteria.

"As a practical matter, we now face questions not so much about war vs. peace ... but of the use of force in circumstances of neither war nor peace in any strict sense," he said, in a reference to lengthy civil wars, open-ended conflicts fueled by terrorist groups and the advent of cyberwarfare. 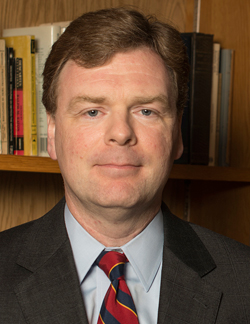 Associate Professor
School: School of Philosophy
END_OF_DOCUMENT_TOKEN_TO_BE_REPLACED
Back to Top