Very Rev. Mark Morozowich , interim provost, was quoted in a USA Today story on why the Pope will not meet with the Russian Orthodox patriarch. See below.

When the pope speaks of resolving theological differences, he is also lending support to Ukrainian Catholics, who follow Byzantine theological, liturgical and spiritual traditions but rejoined the Rome-based church in 1596, said Mark Morozowich, a priest and interim provost of The Catholic University of America, in Washington, D.C.

The Ukrainian Catholic Church is considered a renegade religion by the Russian Orthodox. It was declared not valid by a Russian Orthodox synod in 1946. Its bishops were imprisoned, many were martyred, and thousands of believers were forced underground. And it's still banned in Russia.

"There are thousands of Ukrainian Catholics in Russia and Siberia who are not allowed the freedom of religion in Russia today. That's part of it," Morozowich said. "Why would Russia be blocking the human rights of these people in Russia to witness and to pray according to their conscience?" 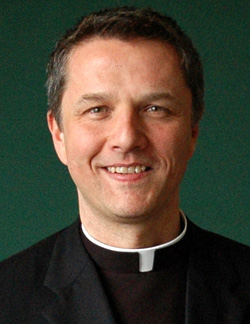 Dean of Theology and Associate Professor of Liturgical Studies and Sacramental Theology
School: School of Theology and Religious Studies
END_OF_DOCUMENT_TOKEN_TO_BE_REPLACED
Share this:

Dean of Theology and Associate Professor of Liturgical Studies and Sacramental Theology
School: School of Theology and Religious Studies
END_OF_DOCUMENT_TOKEN_TO_BE_REPLACED
Back to Top