The many meanings of Rio’s massive Christ statue

Nora Heimann, chair of the Art Department at Catholic University, said Cristo stands out because it is a bridge between the classic European images of Christ on the cross, and more modern, less representational styles. Cristo is the world's largest Art Deco-style sculpture, according to the Encyclopedia Britannica online.

"This is a triumphant image. Most people describe it as sort of globalization of Christ crucified," she said, noting that many modern images of Christ don't even include a cross, whereas in traditional iconography, He was always shown crucified.

Cristo "is striving to be modern in its details," she said.

Duilia De Mello, a Rio native who now teaches at Catholic University, said Cristo is really important for the people of Rio and of Brazil. It sits atop "one of these urban jungles," she said. To get there one passes through a forest (either by hike, by car or by train).

"That statue is really important for us in Rio and for the people in Brazil. It has a lot of things behind it - not just the religious symbol but this welcoming symbol of open arms. It's also supposed to mean we are good hosts," she said. 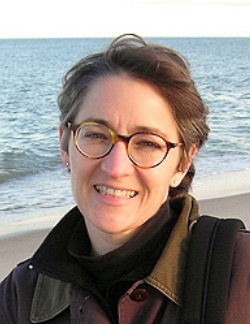 Associate Professor and Chair of Art
School: Rome School of Music, Drama, and Art
END_OF_DOCUMENT_TOKEN_TO_BE_REPLACED
Back to Top