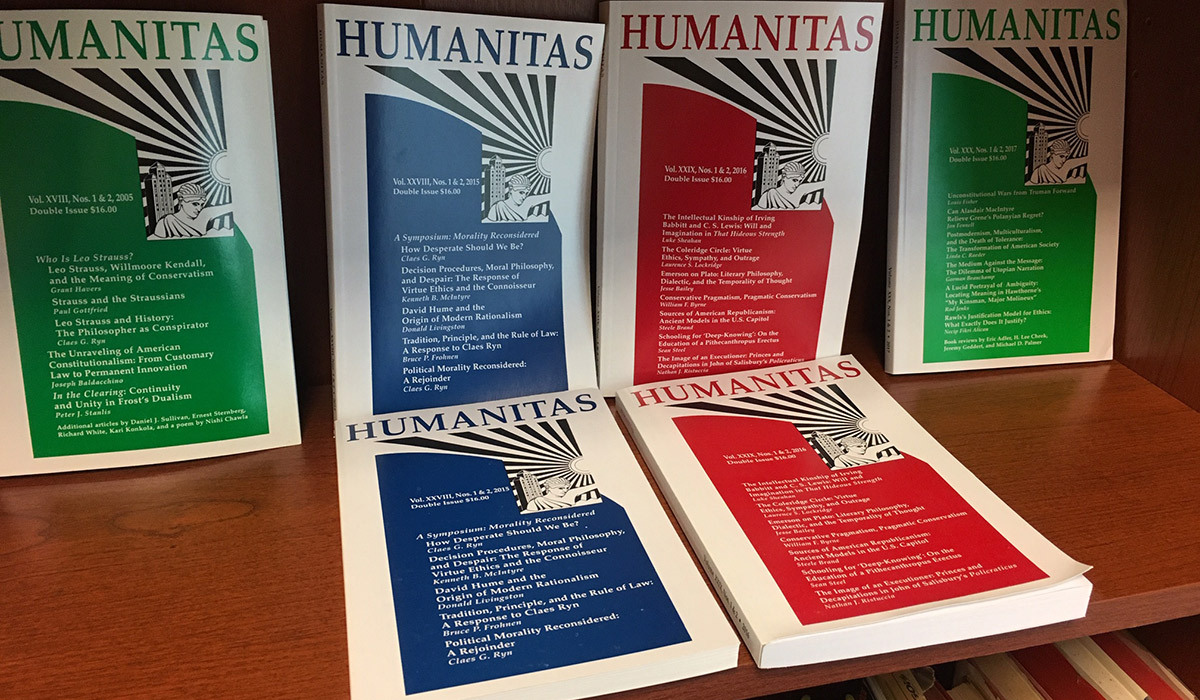 As of this year, The Catholic University of America is the publisher of one of the leading academic journals in the humanities, including the social sciences understood as humane disciplines. Humanitas was for many years published by the National Humanities Institute, but it became a publication of Catholic University’s Center for the Study of Statesmanship in 2018. The most recent edition of the journal was published earlier this semester.

Humanitas, which first began appearing in its current format in 1993, is intended to provide a scholarly outlet for articles on literary, philosophical, cultural, and historical topics, and issues of political theory. According to the journal’s editorial statement (written in 1993), Humanitas “exists to help invigorate the humanities, including the social sciences properly understood” while also providing “more space for scholarship that challenges uncritical assumptions and can set the humanities on a more promising course.”

Politics Professor Claes Ryn, who serves as director for the Center for Statesmanship, has been coediting Humanitas for several decades with his former student Joseph Baldacchino, who earned his M.A. in political philosophy in 1983.

“I think the journal’s interdisciplinary orientation and emphasis on moral and cultural issues is very much in tune with the intellectual traditions of Catholic University,” Ryn said. “The prominence at the University of the study of man and society as a moral, spiritual, and cultural being makes the editorial mission of Humanitas a good fit.”

While the journal accepts articles from scholars around the country, Ryn said there has always been a strong Catholic University connection, in that numerous doctoral students and alumni have been involved in editing the journal or contributing articles. The journal’s current managing editor is Emily Finley, a 2018 Ph.D. graduate who is a post-doctoral fellow at Stanford University.

“Although the journal has been a Catholic University venture from the beginning, we’ve always thrown a wide net, and we have over the years featured articles by many very distinguished writers from around the world,” Ryn said. In 2002 the American Political Science association conducted a large study of political theorists to ascertain which journals they considered most influential and widely read. The study named Humanitas among the top journals in the field.

Finley said she became involved with Humanitas about a year and a half ago and that she’s happy to help sustain the mission of the long-standing journal, which makes room for a wide variety of academic approaches.

“Academic journals in political science generally tend to create and sustain an orthodoxy of thought and approach. Scholarship that does not fit into the dominant view has a very hard time finding an outlet,” Finley said. “Humanitas strives to publish work that is original and also challenges this orthodoxy. Much of its work is at once traditional, in that it maintains a classical view of human nature and society, and also countercultural in that it defies many of the normative assumptions about politics that are currently mainstream. Without a journal like Humanitas, many great pieces of scholarship might never see the light of day.”

To read the current edition of Humanitas or to see the journal’s archive, visit https://css.cua.edu/humanitas-journal/.