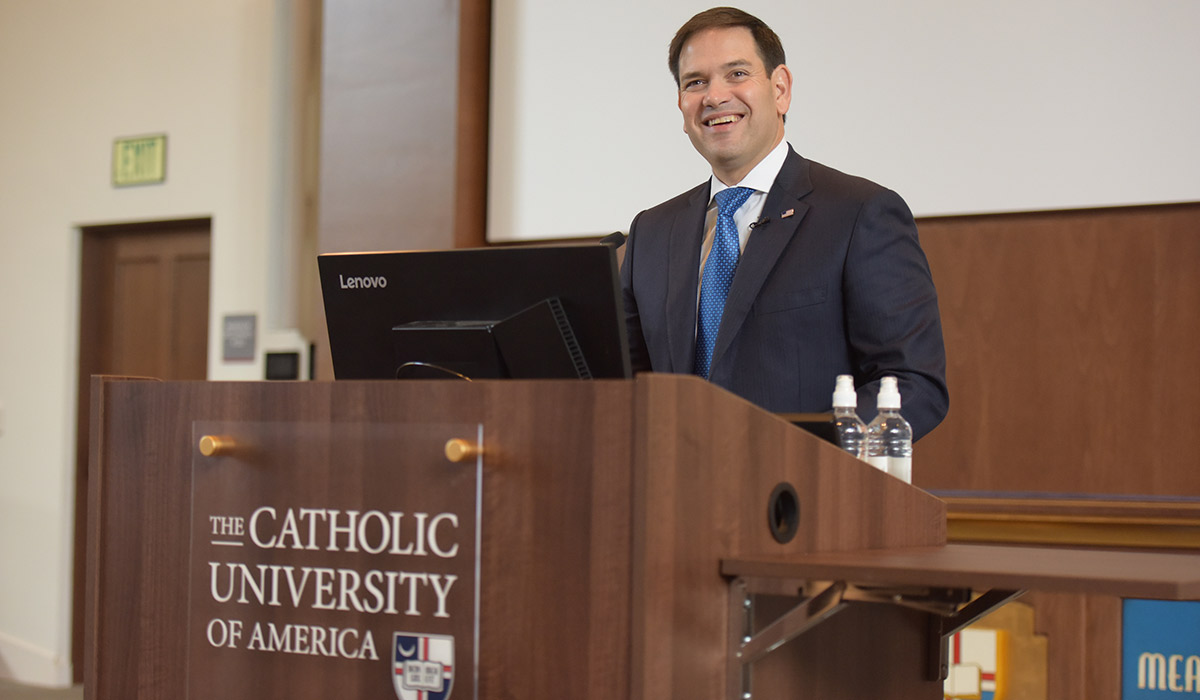 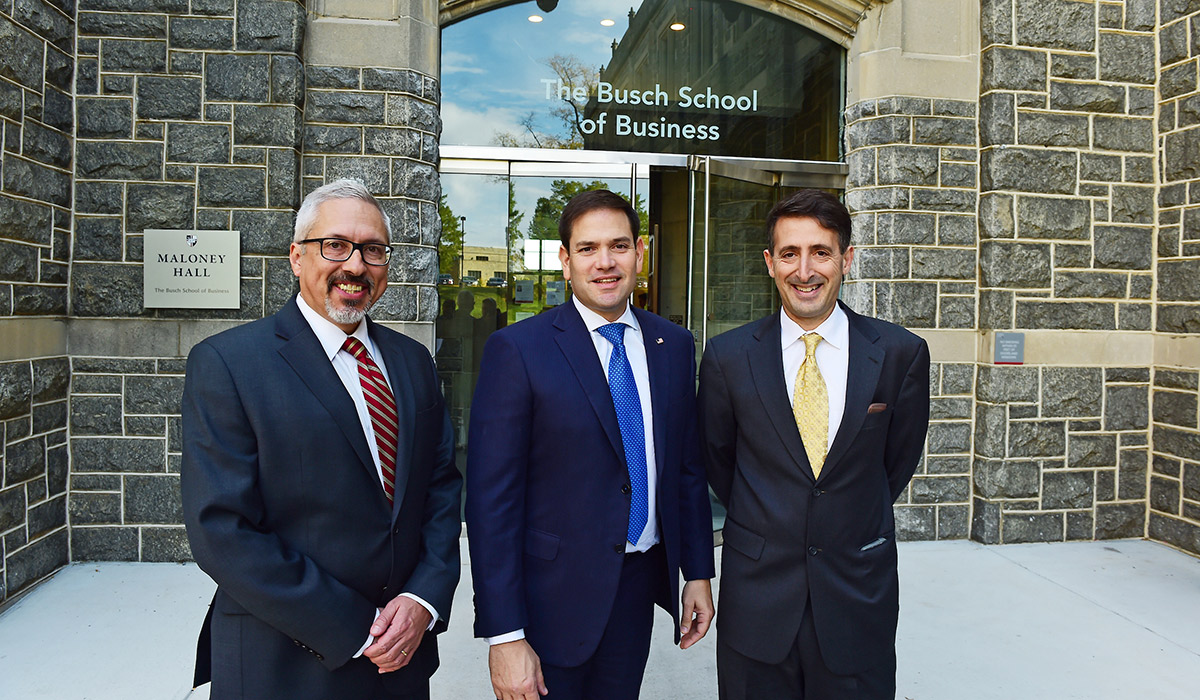 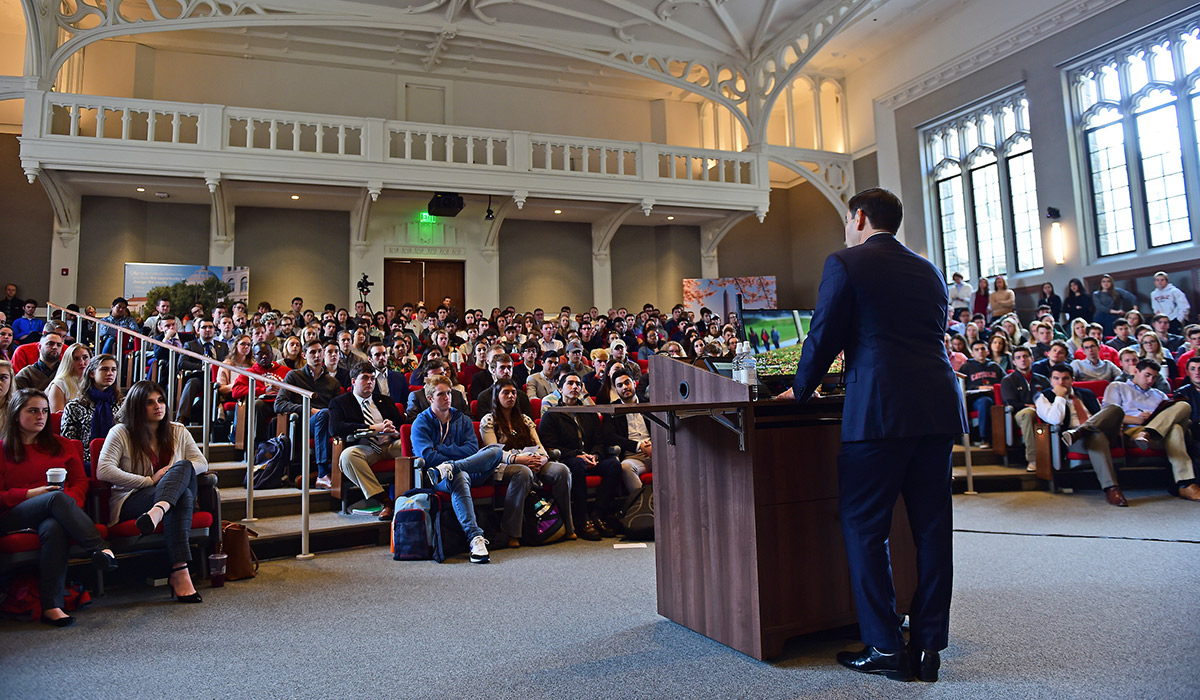 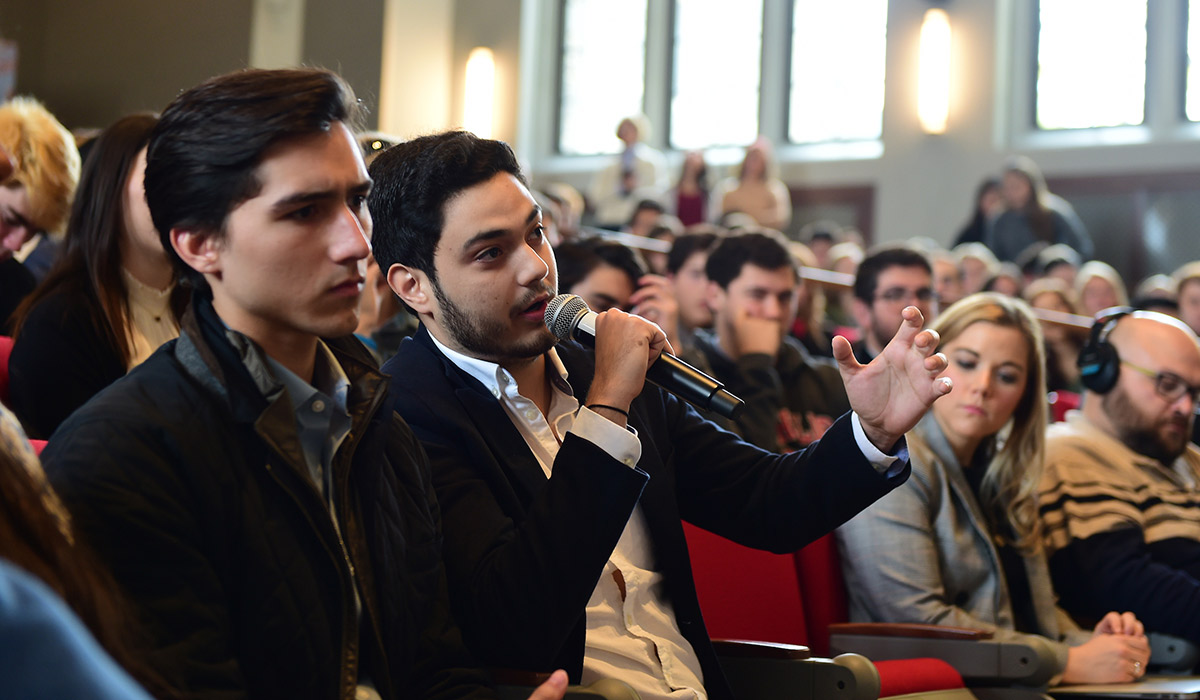 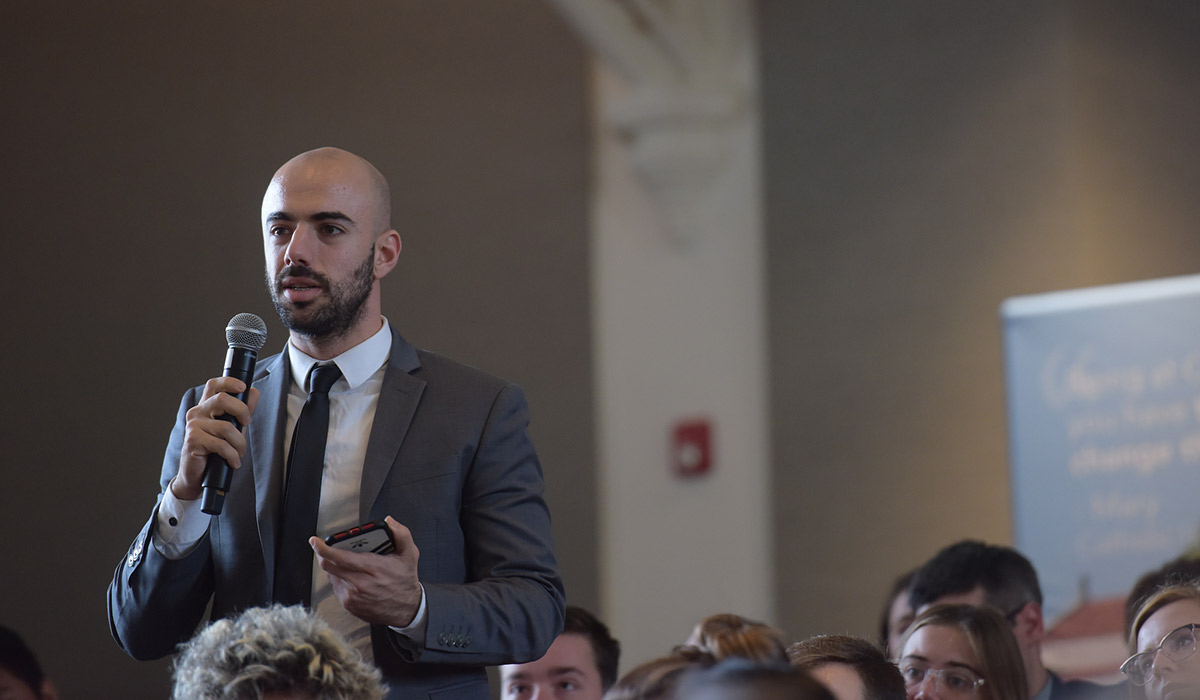 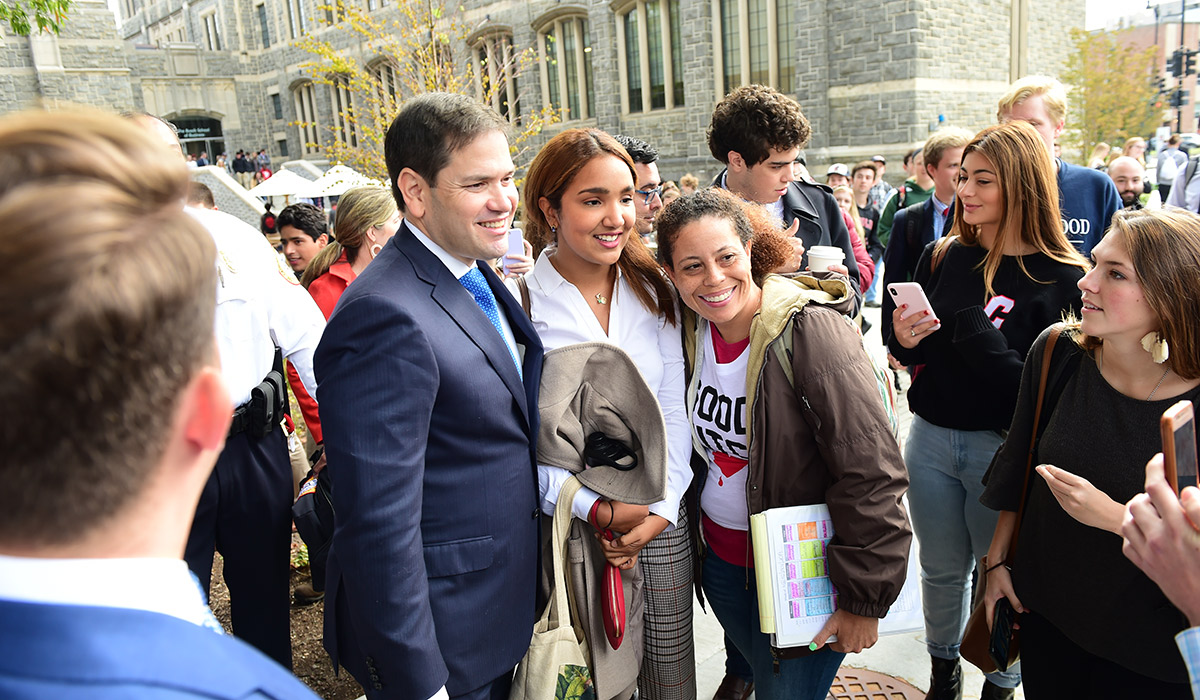 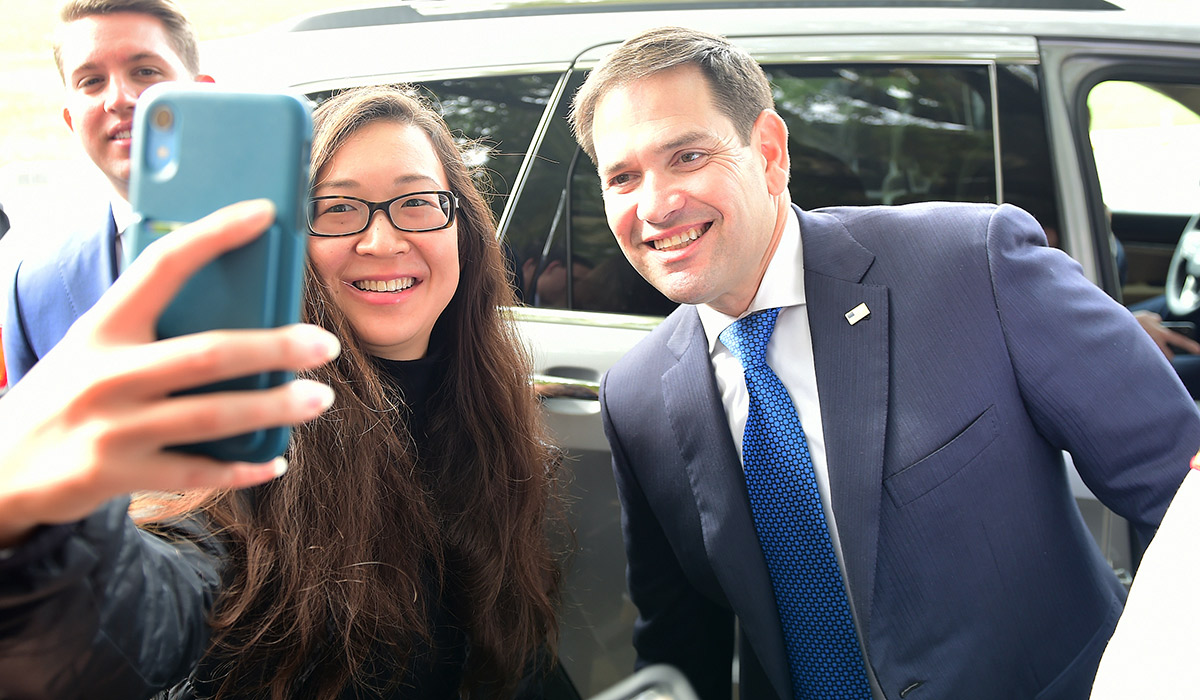 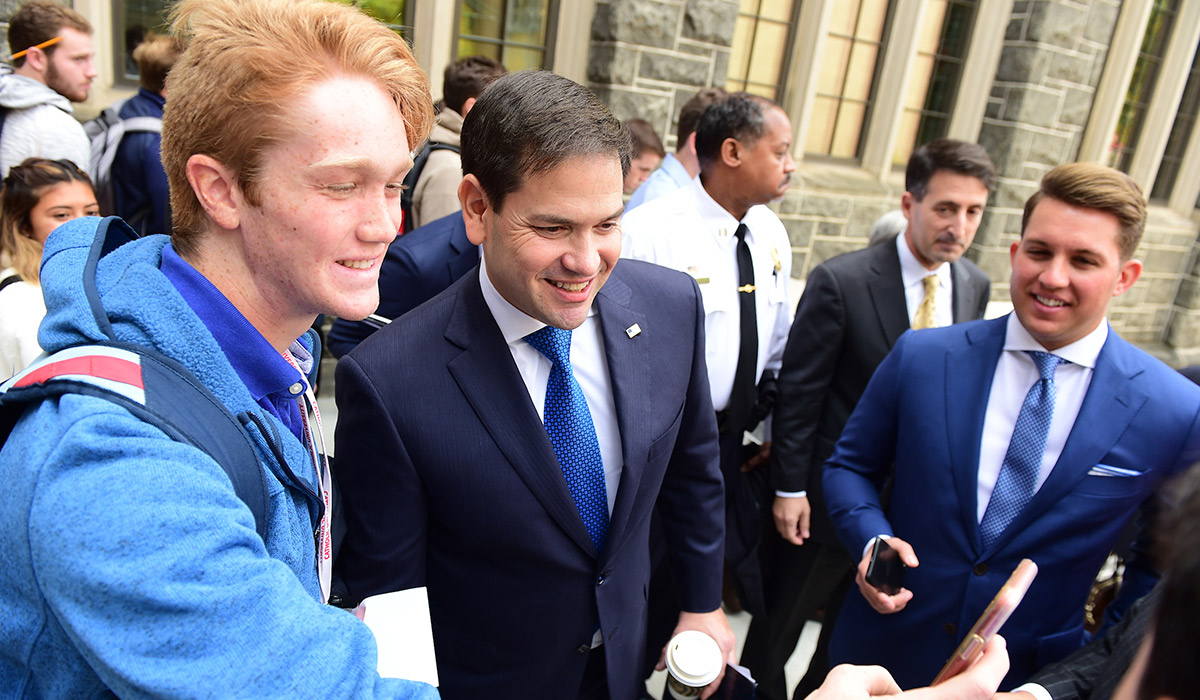 Senator Marco Rubio (R-Fla.) addressed students at Catholic University’s Busch School of Business during a Vocation of Business class on Tuesday, Nov. 5. He spoke about “Human Dignity and the Purpose of Capitalism,” which was an elaboration of an article he published in August in First Things, on Catholic teaching on the economy and work.

Andrew Abela, dean of the Busch School of Business, introduced Rubio and welcomed him, thanking him for his time and willingness to speak with CatholicU students.

“We are honored to have a guest who speaks courageously from a religious perspective,” Abela said.

The opening of Rubio’s remarks received laughs from students in the audience, as he referenced wanting to avoid getting cancelled by an online mob for using a religious figure as a source of wisdom in his speech.

“My first choice was Kanye West … but then he came out with an album called ‘Jesus is King’,” Rubio said. “I settled on focusing on the writings of a 19th century Italian named Vincenzo Pecci.” He then revealed that this was Pope Leo XIII, founder of Catholic University and author of Rerum Novarum, the Church’s landmark encyclical on labor and laborers' rights.

In Rerum Novarum, the rights of both workers and businesses were highlighted, but most importantly in Rubio’s opinion, is that their obligations to one another were also emphasized.

“We are quite familiar and enthusiastic about rights. But not nearly as familiar or excited about our obligations,” Rubio said, and particularly the obligation to offer dignified work.

He defined the concept as: “a system of free enterprise in which workers fulfill their obligation to work and enjoy the benefits of their work; and where businesses enjoy their right to make a profit and reinvest enough of those profits to make dignified work for Americans,” Rubio said.

In order to get to this ideal, he believes the biggest step is for everyone to recognize and agree on the problem. To Rubio, this is not a partisan issue but rather a “human one.”

Rubio said he believes issues like America’s dependence on China and current tax codes hold back American workers from fully giving their time, talent, and treasure; which is a Catholic social teaching on stewardship.

Rubio also discussed socialism, commenting that it “has never worked and never will.”

In conclusion, he spoke about the importance of family and stated that dignified work can help restore the American family and traditional values. Dignified work in the economic equation will allow families time to reinvigorate institutions that bind people together, he said. Institutions like churches, charities, and community groups will only help the American economy. The issue, to Rubio, is that without dignified work, stable community is hard to create.

“We have the opportunity to create an America greater than it has ever been,” Rubio said. “And if we succeed, America will once again transform the world.”