Encountering the ‘Other’ with ‘The Sultan and the Saint’ 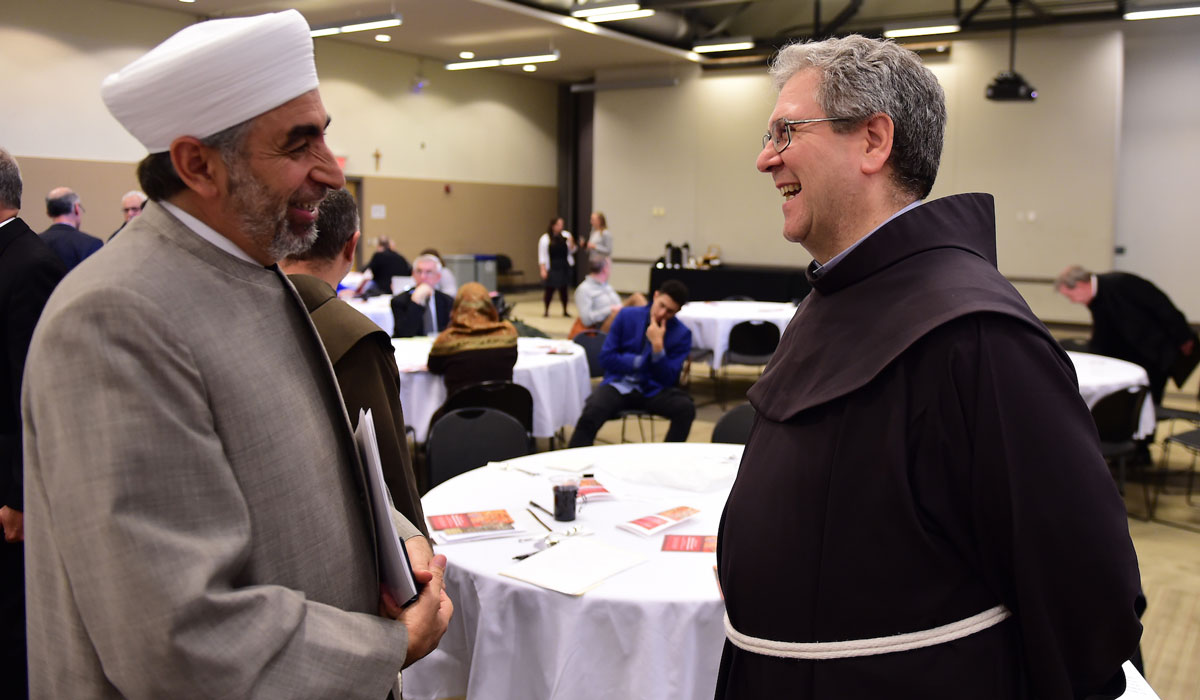 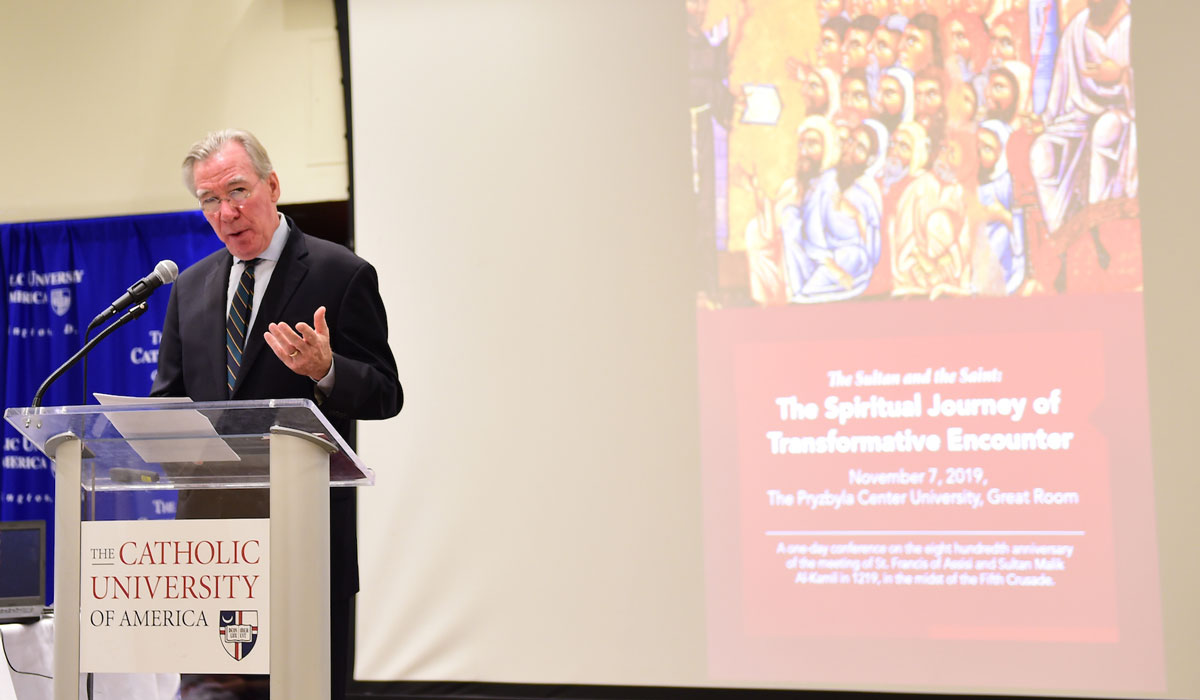 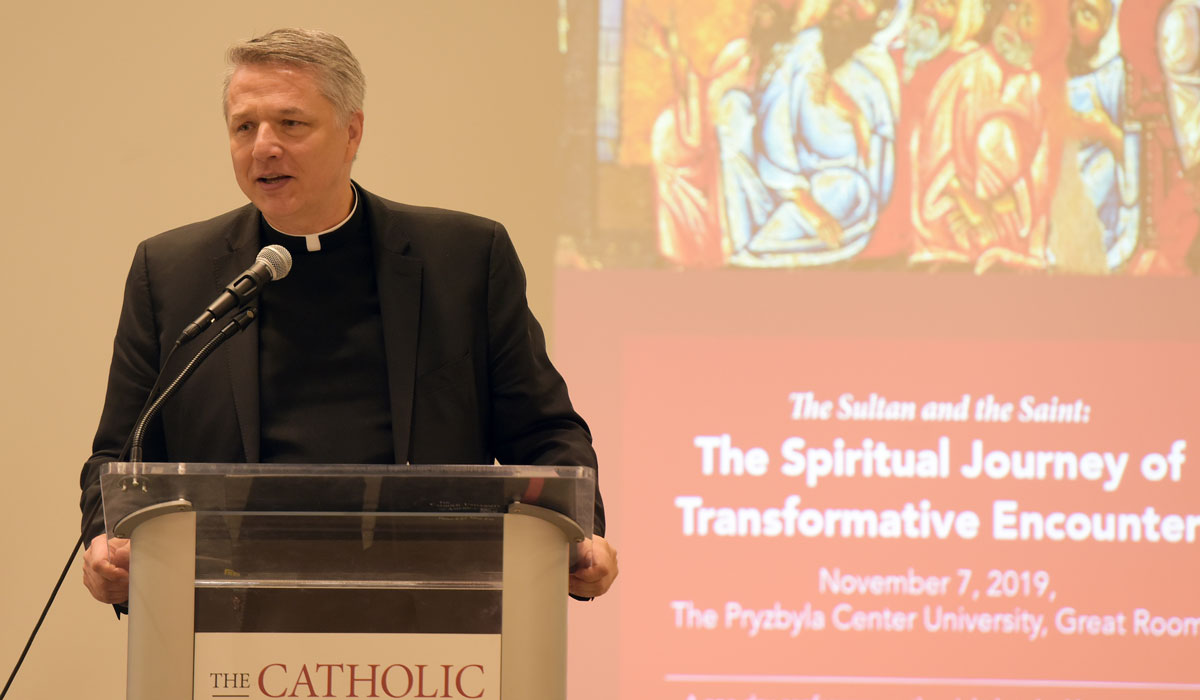 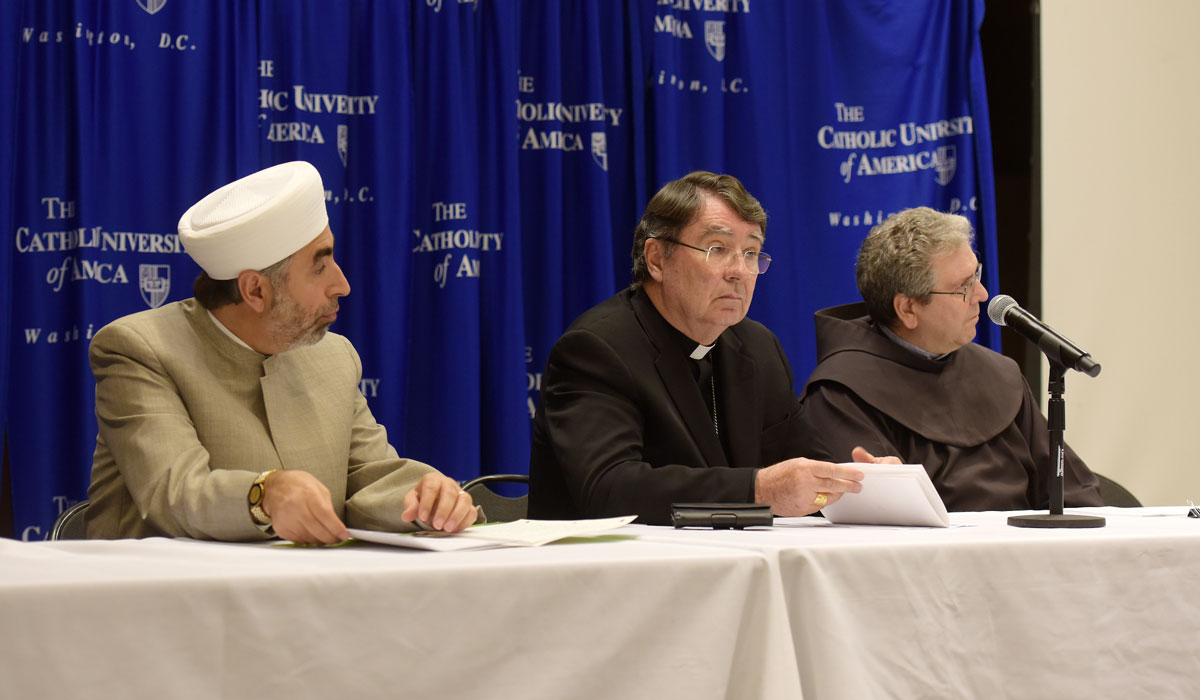 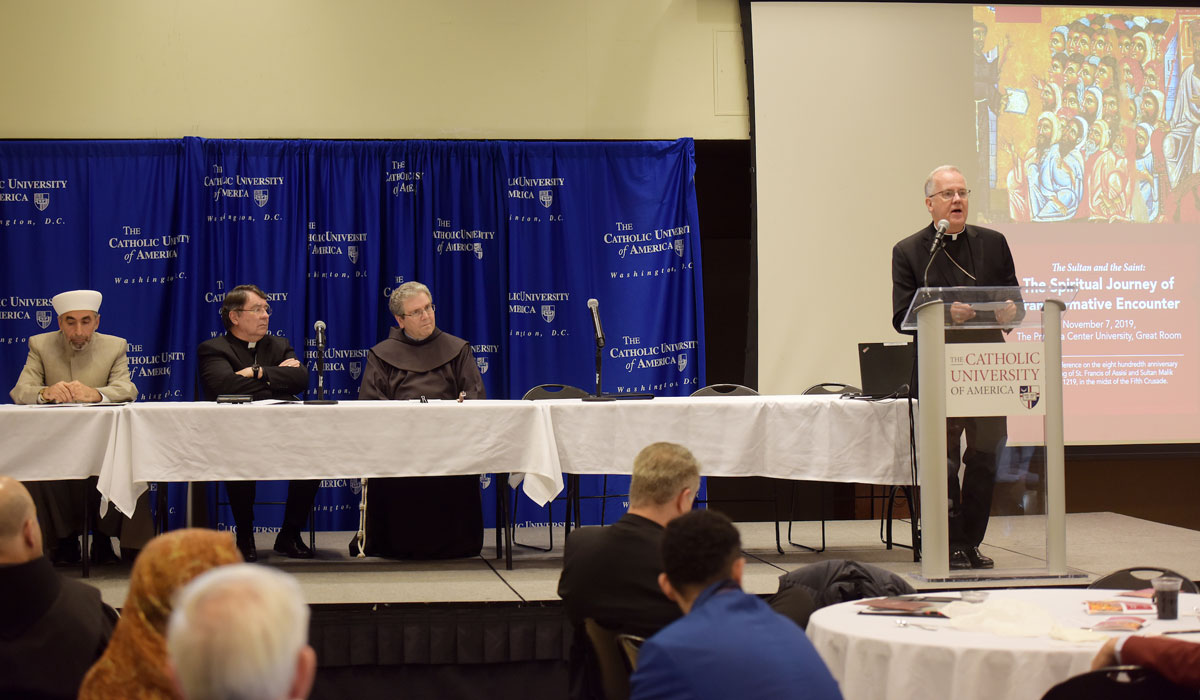 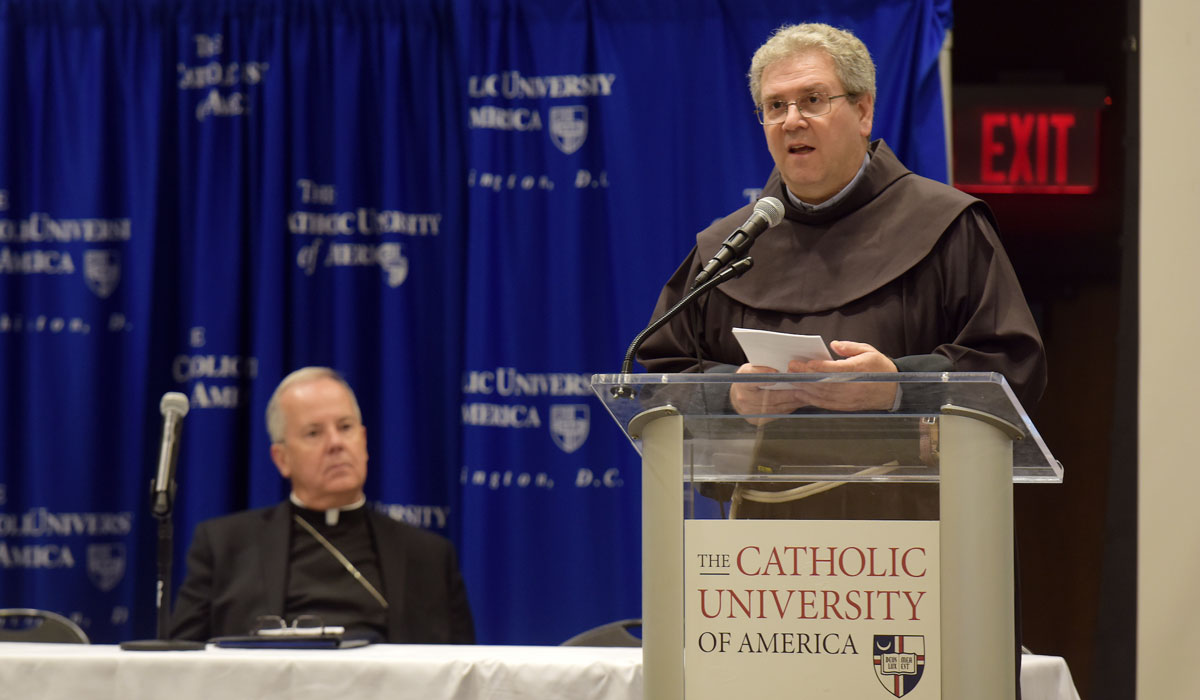 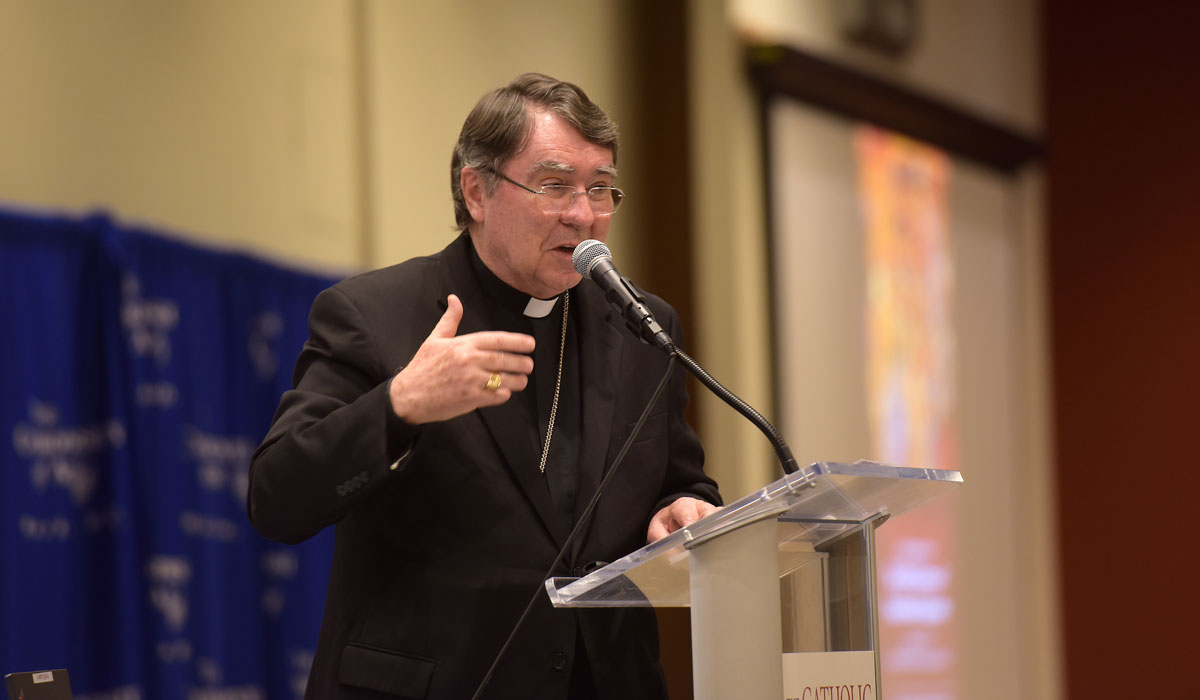 Sometimes it is through examining history that we can gain a new understanding of our modern world. Such was the case during “The Sultan and the Saint: The Spiritual Journey of Transformative Encounter,” a conference that discussed the 800th anniversary of a famous meeting between St. Francis of Assisi and Sultan Malik Al-Kamil. Catholic and Muslim scholars and religious leaders gathered at The Catholic University of America on Nov. 7 to examine the historical context for the meeting, its legacy, and what it can teach Christians and Muslims seeking similar encounters in interreligious dialogue today.

The day of discussion began with remarks from University President John Garvey, who called St. Francis’s encounter with Sultan Al-Kamil “an extraordinary peaceful encounter set against a backdrop of violence” during the Fifth Crusade in 1219. Though stories of the meeting suggest that the sultan was counseled to execute the friars, he instead chose to meet with Francis “over the course of several days, courteously listening as Francis preached the gospel,” Garvey said.

Reflecting on the meeting, Garvey called Francis’s actions “an act of ardent love of God” and a reflection of his ability to see the image of God in others. “Francis shows us how to encounter the other, I suggest, by showing us how to love the other,” he said.

Assistant Professor of History Lev Weitz explained the many ways in which the lives of Christians and Muslims intersected in the centuries leading up to Francis’s meeting with Sultan Al-Kamil. During those years of expansion of the Islamic Empire, many Muslims lived among Christians and Jews, conducting business and cultural exchanges together on a near-daily basis.

“Interreligious contact was really there and a part of life,” said Weitz. “This context of both conflict and exchange both informed St. Francis and the sultan and informs why they met in the first place.”

Rev. Michael Calabria, O.F.M., director of the Center for Arab and Islamic Studies at St. Bonaventure University, spoke about the importance of differentiating hagiographical accounts of the meeting from actual historical evidence of what it entailed. “If one reads hagiography as history, it is possible to actually exacerbate discords rather than heal them,” he said.

Early Franciscan biographical accounts of Francis’s encounter with the sultan are not purely reliable, Father Calabria said, because Francis’s motivations and actions vary greatly, in reflection of the changing political climates in which authors were living. In addition, he said, the stories often treat the sultan as “more of a prop for the lead actor.” In reality, Sultan Al-Kamil was known to be a spiritual and educated man who would have already been exposed to Christian teachings.

Speakers during a keynote session discussed present challenges Christians and Muslims face while encountering the “other.” Custos of the Holy Land Brother Francesco Patton, O.F.M., shared his personal experiences of living in the Holy Land with Christians and Muslims in close proximity everyday. He said it is important not to view people who are different as enemies, but as brothers and sisters.

“For Francis, ‘the other’ is a gift from God and the way to relate to him is to welcome him in kindness,” Father Patton said.

“How fragile is any peace obtained through the defeat of the enemy, when we see an emphasis on difference and incompatibility complicated by a lack of communication between different religions,” he said. “Only genuine encounters and dialogue can be of benefit in the long term.”

Archbishop Christopohe Pierre, Apostolic Nuncio, reflected on encounters between Pope Francis and Muslim leaders today, particularly his visit with the Grand Imam of Al-Azhar Ahamad al-Tayyib in Morocco earlier this year. During that visit, both faith leaders signed a document on “Human Fraternity for World Peace and Living Together.”

“[Pope Francis] sees human fraternity as a path for peace and mutual understanding in this world and a force for good,” Archbishop Pierre said. “The protocol for which we will be judged is based on fraternity. Christians are called to be neighbors and brothers to others and to treat them with respect and compassion like St. Francis of Assisi, and to remember that ‘Whatever you did to the least of my brothers and sisters, you did to me.’”

The session concluded with a reflection from Imam Mohamad Bashar Arafat, president of the Civilizations Exchange and Cooperation Foundation, who said the historic encounter provides “a mission for us to follow, a story of reaching out to ‘the other’ for the sake of peace, reconciliation, and harmony.”

“This will not happen unless we have deep faith in the Almighty and are willing to leave and forsake your comfort zone to accept the challenges that are presented to us in life,” he said.

In the modern world, where some spread hatred and suspicion that is “divisive and threatening,” Iman Arafat challenged people of faith to “stand and fight against discrimination” and remember St. Francis’s call of peace.

The conference concluded with a roundtable discussion featuring Christians and Muslims from the D.C. area with interests in interfaith dialogue. After a dialogue in small groups about the relevance of Christian - Muslim relations on the campus of the Catholic University, Fr. Jude DeAngelo O.F.M.Conv. and Imam Bashar Arafat chanted the beautiful names of God, and sang the Praises of God by St. Francis. The event was sponsored by the School of Theology and Religious Studies, the Institute for Interreligious Study and Dialogue at Catholic University, the United States Conference of Catholic Bishops, the Franciscan Monastery of the Holy Land in America, and the Civilizations Exchange and Cooperation Foundation.