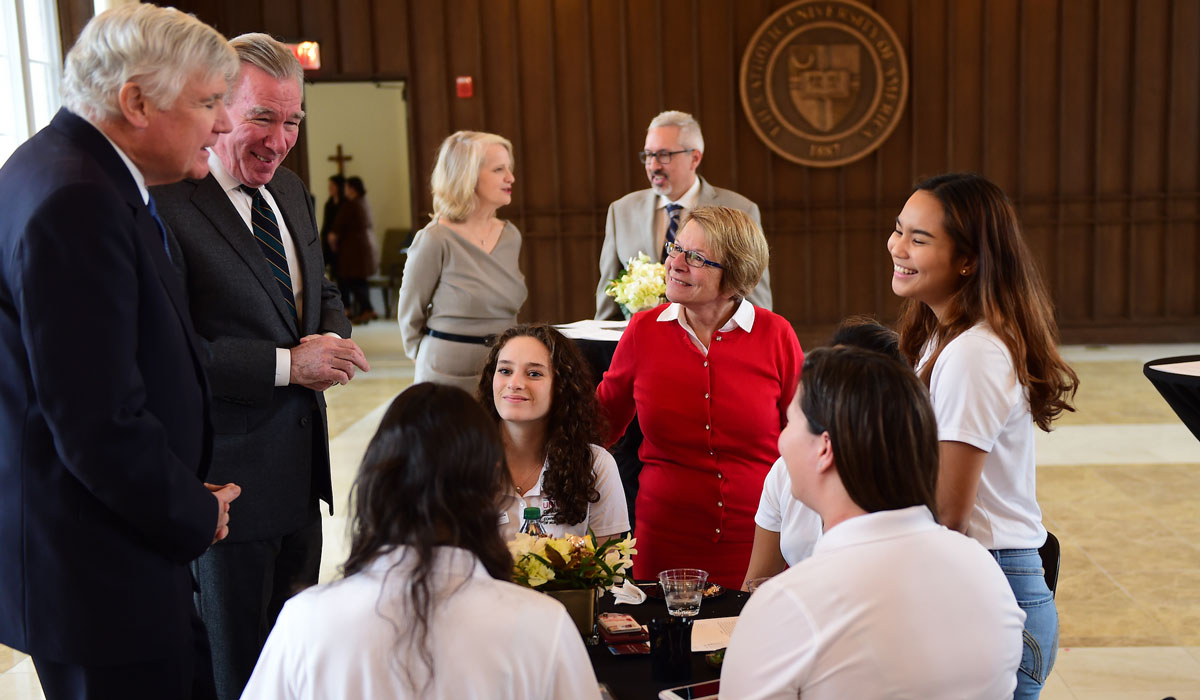 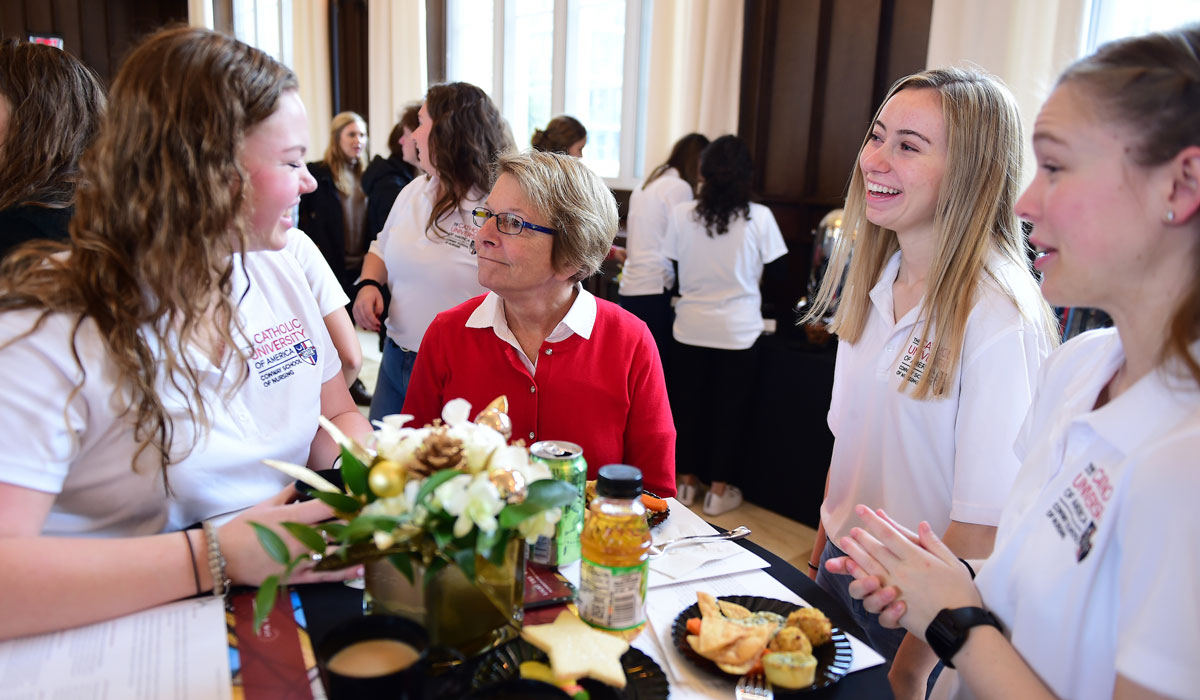 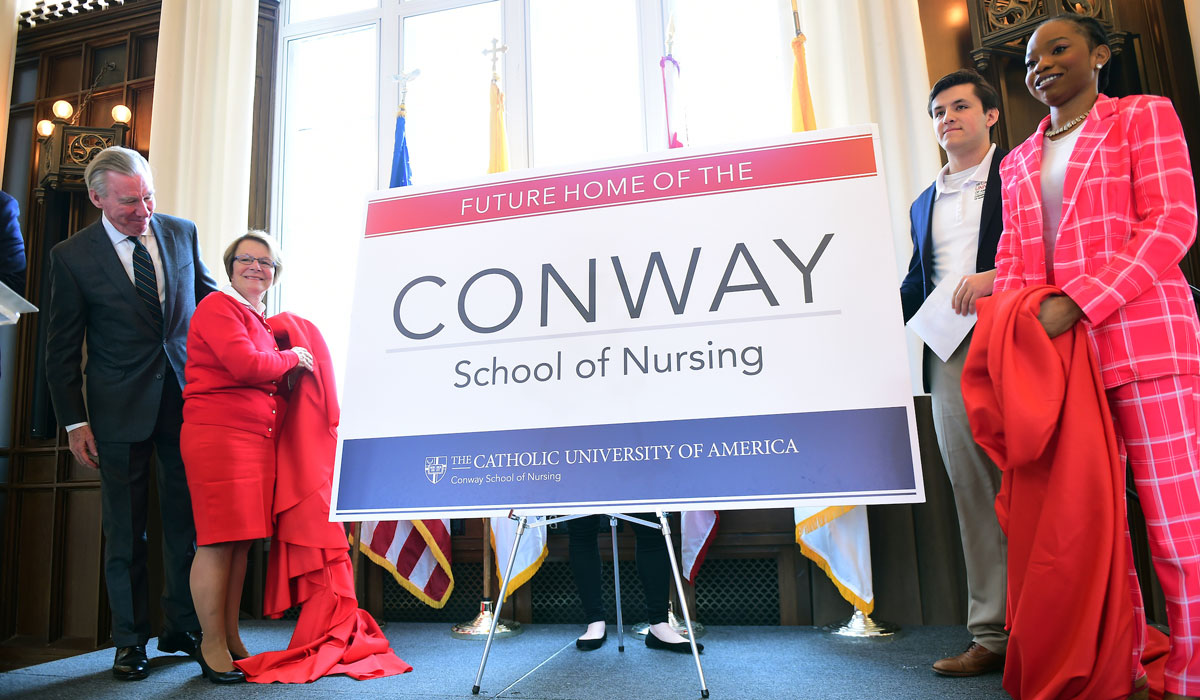 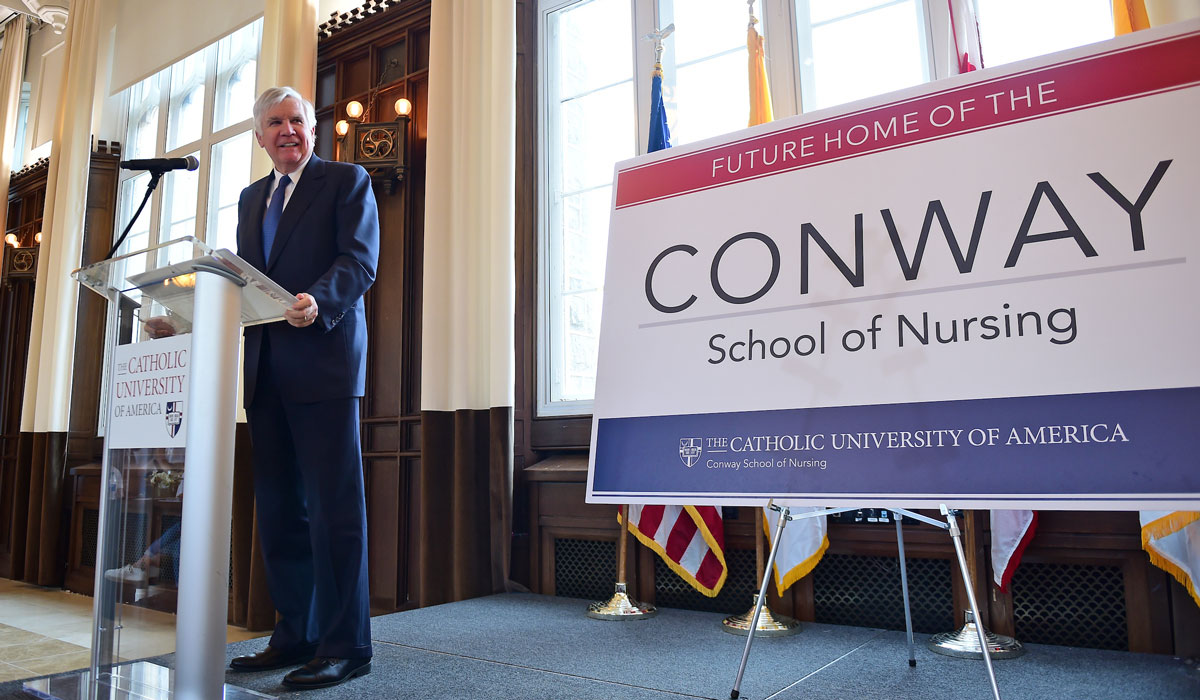 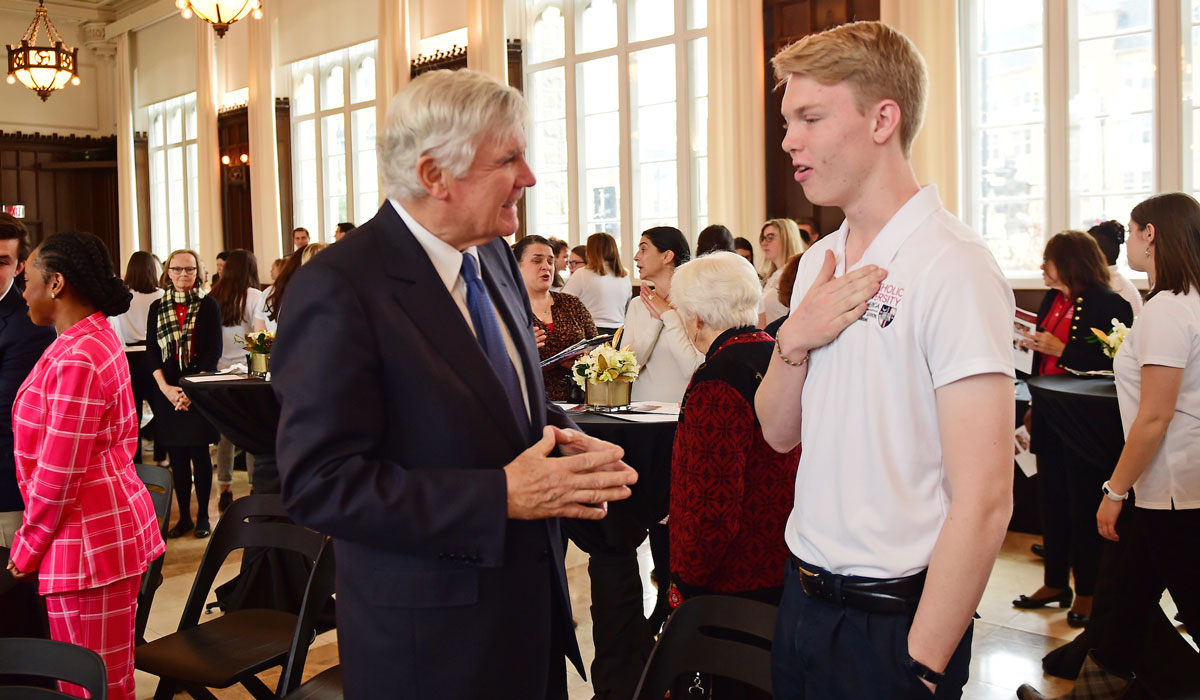 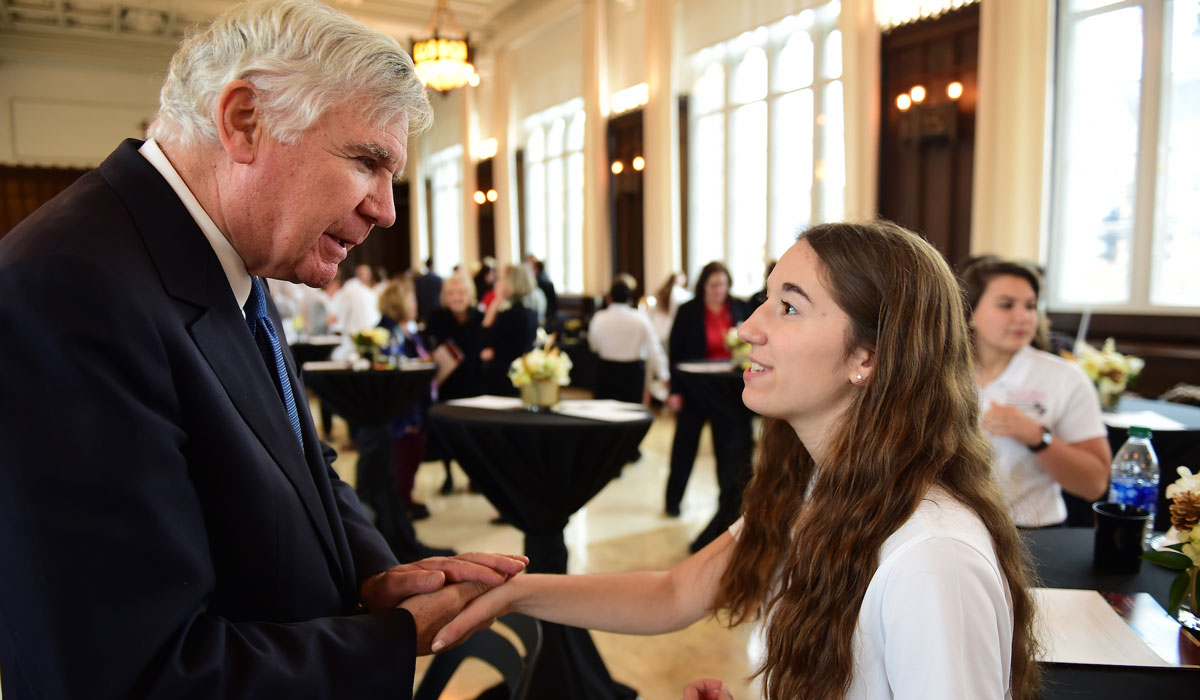 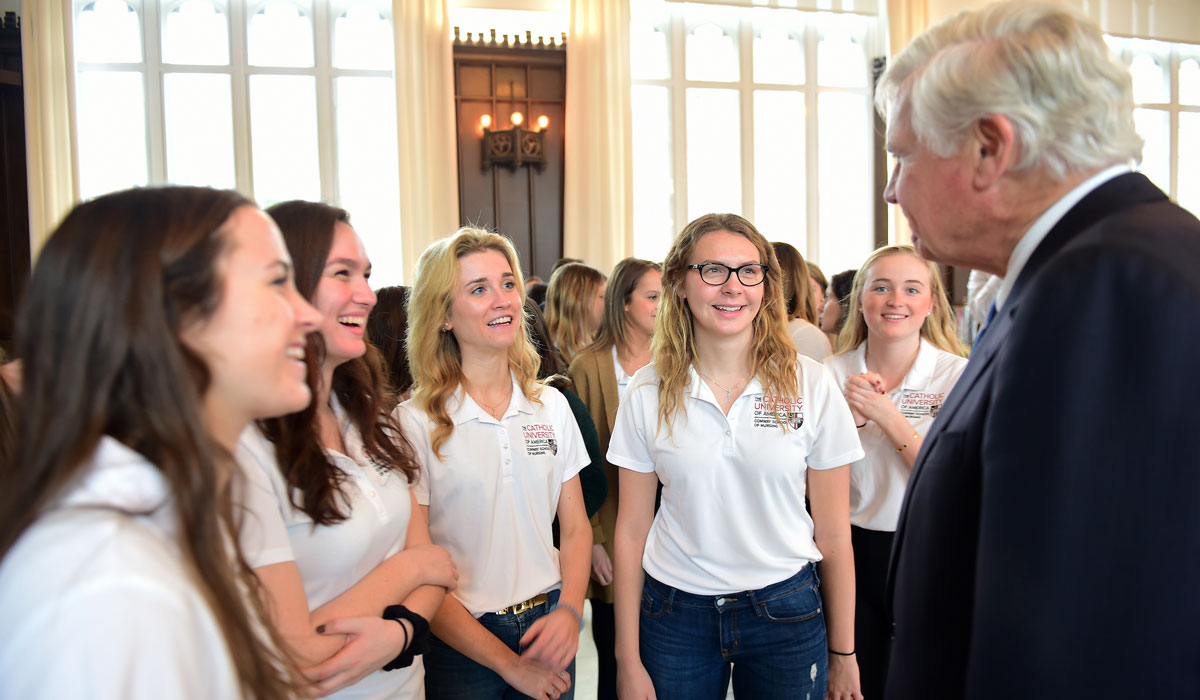 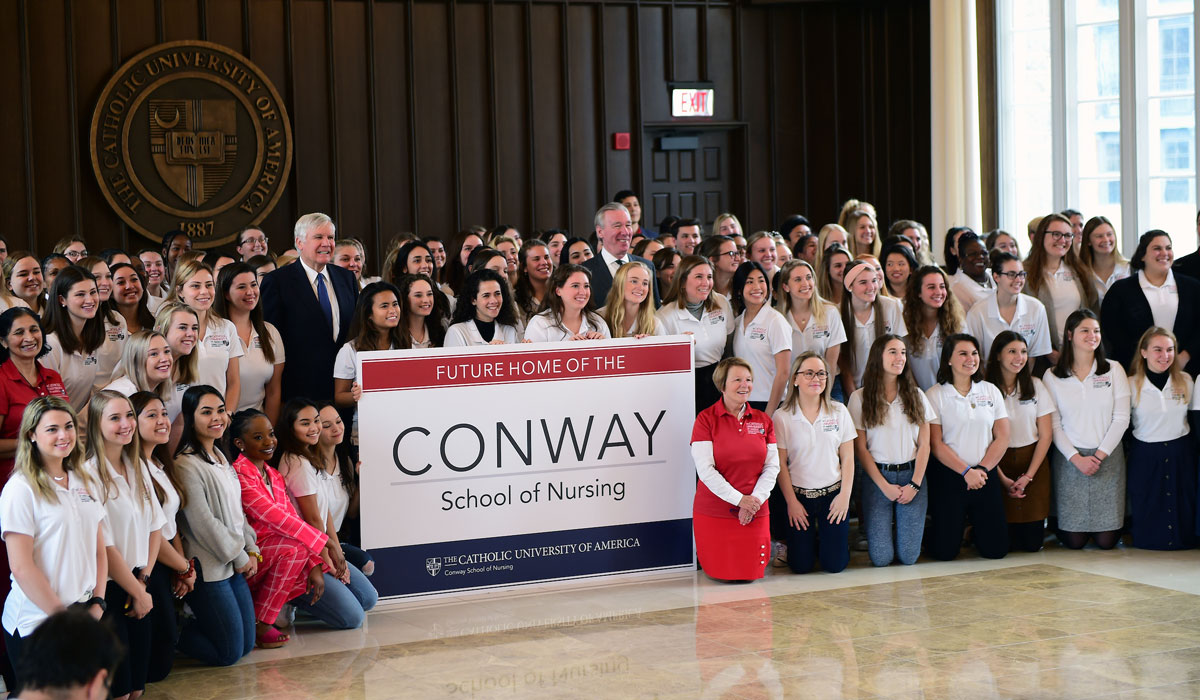 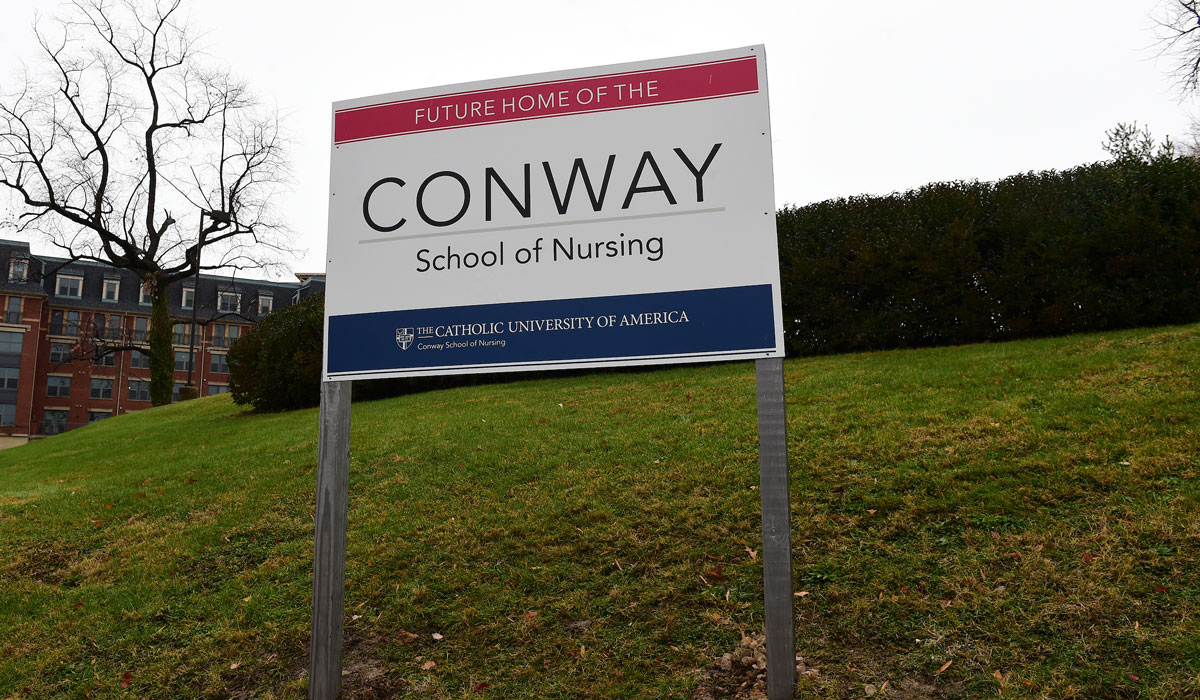 A Dec. 2 celebration of the inaugural year of the Conway School of Nursing was all about gratitude, said Dean Patricia McMullen. She and her nursing students, proudly wearing white polos featuring the new name of their school, turned out in force to celebrate and thank donors Bill and Joanne Conway.

The Conways commitment to and strong relationship with the nursing school began in 2014, when they funded the first cohort of 17 Conway Scholars through their Bedford Falls Foundation. Since then their scholarship support has totaled $20 million and is now funding a third cohort of Conway scholars.

In June, the Conways gave a $20 million gift to the school, which will partially fund a new nursing and sciences building. In recognition of their philanthropy and support the University renamed its nursing school to honor them.

During his remarks, President John Garvey talked about the school’s rising enrollment and said the school’s biggest obstacle to growth is now its physical space. “Today, there are 44 nursing scholars in our program,” he said. “We knew the effect these gifts would have on our individual students, but what we didn’t anticipate is the way Conway Scholarships would lift the entire school. … With a new nursing and sciences building, we hope to expand the size of our nursing school to 700 students.”

“Through Joanne and Bill’s philanthropy we’ll be able to address so many of the challenges and opportunities facing the nursing profession,” said McMullen, pointing to an estimated shortfall of 1.1 million nurses by 2022. “We’re particularly grateful that the Conway School of Nursing provides students at all levels not only with outstanding course work in the arts, sciences, and humanities, but that Conway nurses also complete studies in theology, philosophy and biomedical ethics. We unashamedly care for the body, mind, and spirit of patients, communities, and international groups.”

Also speaking at the event was Scholastica Ibezimako, B.S.N. 2017, a member of the first cohort of Conway Scholars and a nurse at Children’s National Health System in Washington, D.C., and current nursing student Matt Zeigler (Class of 2022). “I am thrilled to be part of the new Conway School of Nursing and I pray that I am inspired by the gift to do well for my patients and their families,” said Zeigler.

When Bill Conway, who is a member of the University Board of Trustees and co-founder and co-executive chairman of The Carlyle Group, took to the podium, he returned the spirit of gratitude to the students and nurses in the room. “I have great respect for what you do. Nurses need to be competent and compassionate,” he said, noting that nursing students at Catholic University are both.

The Conway’s recent $20 million gift — the largest single gift in University history — was made as part of Light the Way: The Campaign for Catholic University. Through this Campaign, the University has set a goal to secure more than $100 million for premier academic spaces.

The Conway’s recent $20 million gift — the largest single gift in University history — was made as part of Light the Way: The Campaign for Catholic University. Through this Campaign, the University has set a goal to secure more than $100 million for premier academic spaces.