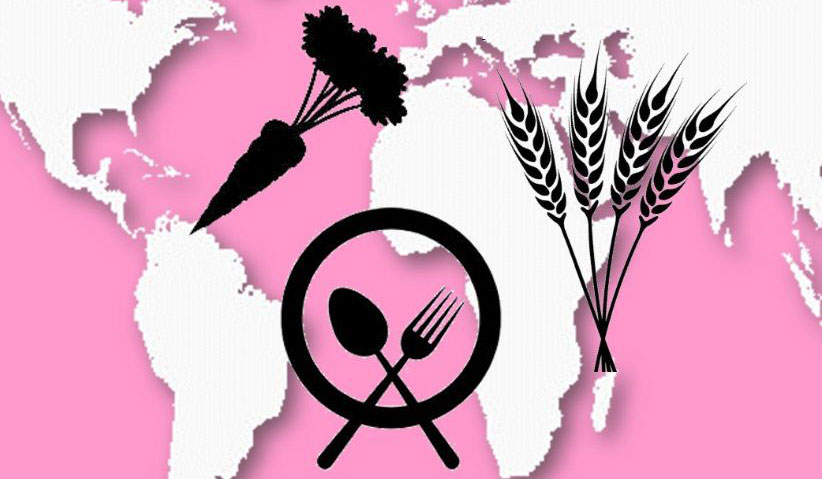 For the past two years, History Professor Lawrence Poos has tried to engage his students’ senses while teaching a course on Global Food History. Joining the fields of anthropology, sociology, history, art, religion, and literature, Poos designed the course to look at the role of food across all levels of humanity.

“The possibilities are endless for the subject and the trick was narrowing the course down and keeping it manageable,” Poos says. “This is really more fun that I should be allowed to have in a classroom.”

A passionate home chef, Poos has used the course as an opportunity to share with students his appreciation for food. During a lesson on food in literature earlier this spring, students sampled homemade French madeleines while reading a Marcel Proust excerpt about being transported in memory through eating the French pastry. For another class, Poos brought in chicken tikka masala to illustrate how immigrant foodways brought new varieties of cuisine into British culture.

As in past offerings of the course, Poos also planned field trips to the Smithsonian Museum of American History, the Department of Agriculture, and the National Gallery of Art to show the role food can play in history, economics, and art.

Unfortunately, many of those plans changed in mid-March, when the COVID-19 pandemic brought tourism and most business in the Washington, D.C., area to a sudden halt. After the University moved classes online, Poos found himself thinking “quickly and creatively” about how he could still provide a valuable educational experience for his students, using only the power of technology.

“In normal times, my life during the semester revolves around one class at a time and thinking about what will happen in the next one,” Poos says. “This has really forced me to go back to the beginning and rethink everything.”

Poos says he is trying his best to maintain a sense of continuity and normalcy for his students. One of the first decisions he made was to keep the course synchronous, meaning students still meet at the same times each week via videoconferencing.

Poos has also tried to find a way to replicate visits to area D.C. landmarks. Instead of the curator-led tour through the Museum of American History’s food history collection, Poos and his students have listened to podcasts, watched videos, and looked at exhibition photos online.

“The plan was not just to go to the museum and look at the exhibit, but also to have a session with these curators and talk about the choices they made about which objects to include,” Poos says. “With the students, I tried to pretend we were looking at the exhibit and getting a virtual tour. The object was not just, ‘Let’s look at stuff,’ but also, ‘Let’s look at how they organized these items together to tell this story.’”

Instead of a trip to the Department of Agriculture, Poos talked with students about the economics of food in America, how much money families typically spend on food inside and outside of their homes each year, and the challenges faced by families living in “food deserts,” where the nearest grocery store might be more than a mile away. And rather than taking students to the National Gallery of Art to learn how food has been depicted throughout art history, Poos worked with a museum curator to choose high-resolution images of paintings to share with his students.

With 36 students in a virtual classroom, Poos said it can be hard to know how they are engaging with the day’s topics. But he still leaves time for group discussions each session.

“I’m surprised and pleased by how well it seems to be going so far,” says Poos. While he regrets that he can no longer share baked goods and other foods with his students, Poos is still hoping to show students how the history of food can be a history of humanity as a whole.

“The best endorsement I can get is when a student says, ‘This class makes me see food history all around,’” he says.

The adjustments made by Poos have been appreciated by senior history major Joslyn Felicijan, who says the course has allowed her to reflect on “the quiet yet vital role food plays in all areas of our lives.”

“We recently spent an entire unit investigating how menus in modern American history can reveal the progression of immigration, socioeconomic classes, and the Women’s and Civil Rights movements,” Felicijan says. “It was shocking to realize that something as simple and straightforward as a menu can track entire social, political, and economic movements.”

Felicijan has appreciated Poos’ efforts to “maintain the positive and comforting normalcy” of his course despite the sudden shift to online learning.

“Not only has he kept the same exact classroom routine … but he has even found fun ways to continue engaging us in food history,” she says.

As for Poos, he is happy that he can still have memorable guest speakers come and share their experiences. In a few weeks, the class will be joined by Brother Andrew Corriente, the Franciscan friar and third year Catholic University graduate student who won The Great American Baking Show last December.

“He’s going to talk about how he sees the relationship between food and faith,” Poos says. “Sadly the app has not yet been invented that will allow students to taste online the cupcakes he bakes.”