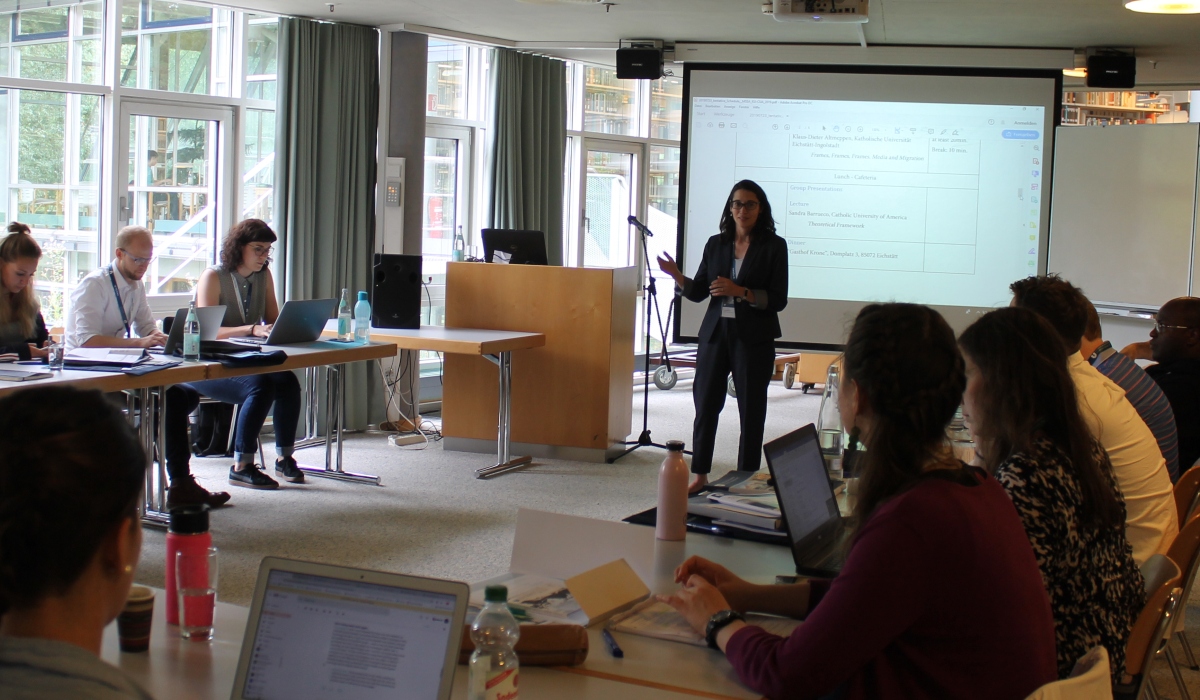 Photo is from the 2019 Migration Studies Summer Academy.

MSSA was originally planned to occur at Catholic University this year. However, due to the COVID-19 pandemic the organizers decided to connect virtually.

The webinar began with a welcome from Sandra Barrueco, professor of psychology and director of Latino American and Latino Studies, and Karin Scherschel, professor and head of the Center for Flight and Migration at Eichstätt-Ingolstadt.

“I invite everyone to reflect on the work you’re doing on migration but particularly thinking about how it’s been impacted this past year and in the future related to COVID-19 and other developments across the world,” said Barrueco.

A presentation titled, U.S.- Based Pro Se Clinics in Mexico - Filling the Due Process Void or Fighting a Losing Battle? by Stacy Brustin, professor of law, touched on the rights of asylum seekers. Brustin shared the research she is conducting on legal services in border towns in northern Mexico to assist asylum seekers.

Currently, many asylum seekers are required to remain in Mexico and await their U.S. immigration court proceedings with the implementation of the Migrant Protection Protocols. “This is a process that could take months, but now with COVID and immigration courts being delayed and closed, this could take years, especially if it includes appeals,” said Brustin.

Brustin is looking at community- and faith-based legal service efforts that were initiated by U.S. NGOs in response to the Migrant Protection Protocols. While noting these organizations are undertaking incredible efforts to help unrepresented asylum-seekers improve their odds in immigration court, Brustin acknowledged. “The application assistance and hearing preparation is insufficient to protect the due process rights these individuals have under our Constitution,” says Brustin.

However, she explained, organizations are building the groundwork for stronger cases for appeals by asylum seekers. “They are documenting human right abuses and violations of due process in a way that is informing public policy, litigation, and public opinion. Most importantly, these organizations have a focus on accompaniment and preserving the dignity of the human person,” she said.

Julia Young, associate professor of history, presented, The Migration-Deportation Cycle: A Century of Mexican Migration to the United States.

She described the factors that have been pushing people out of Mexico and pulling them to the U.S. over the past century, including transportation networks, growing industries like agriculture, the Mexican Revolution, the Cristero War, WWII, political instability, and poverty. After the 1960s, Young explained the rise of unauthorized workers from Mexico in agriculture, construction, hospitality, and manufacturing industries.

Young described the different ways the U.S. has responded to migration. Border patrol was established in 1924; deportation drives/round-ups started in 1929 and continued throughout the 20th and 21st centuries; and after the 1980s, the U.S. began establishing detention facilities, all of which continue today.

“This has led to the political situation we see today, deaths along the border, children and families in detention centers, policies that don’t get to the root of the problem,” said Young. “The idea that our border policy is simultaneously ‘stop and stay out’ and at the same time ‘come in, we need you’ summarizes our century of policies towards Mexican migrants. It's a policy that doesn’t work because it doesn’t deal with the ‘push/pull’ factors - in other words, the root causes of migration.”

Other sessions described how COVID-19 is linked to shifting borders and discussed refugees in Germany. The webinar concluded with remarks by Aaron Dominguez, University provost and professor of physics.

“The goal is to continue these international partnerships, not just to study and describe problems, but to find solutions,” Dominguez said.