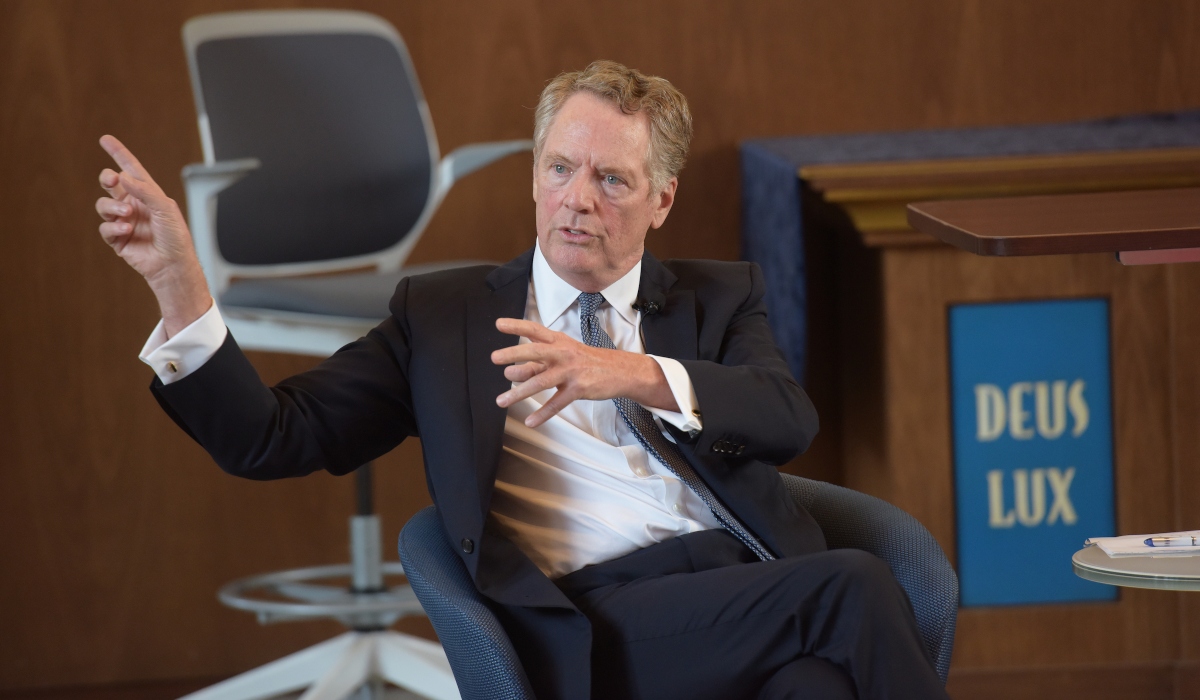 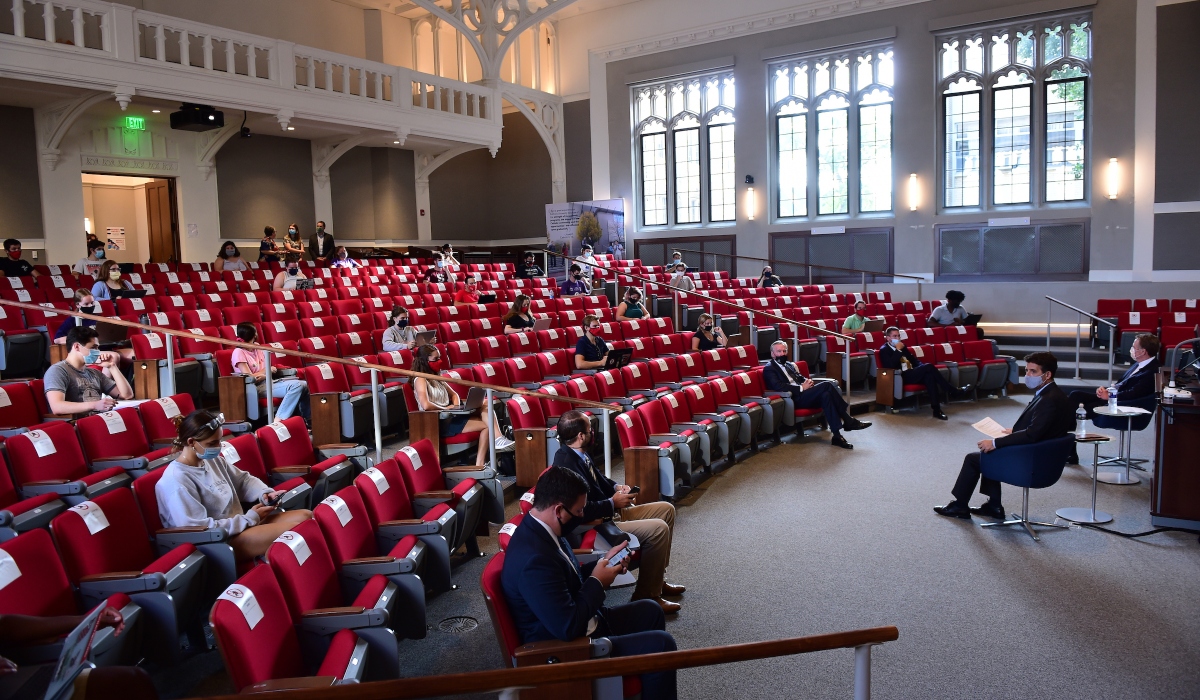 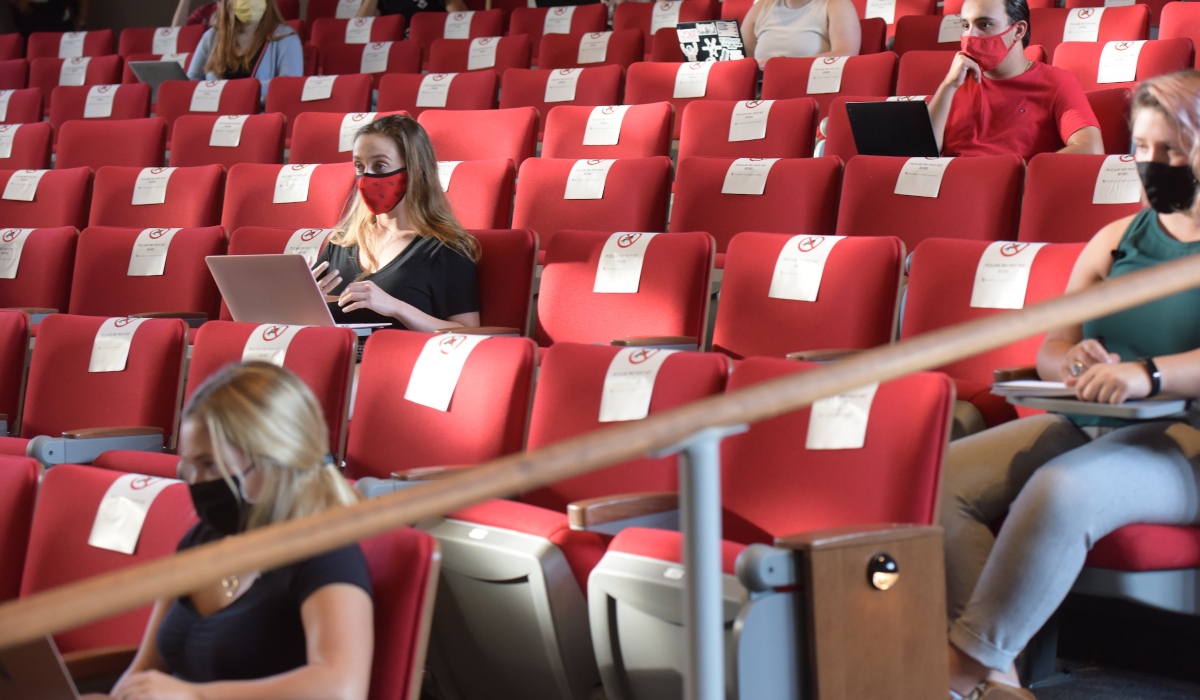 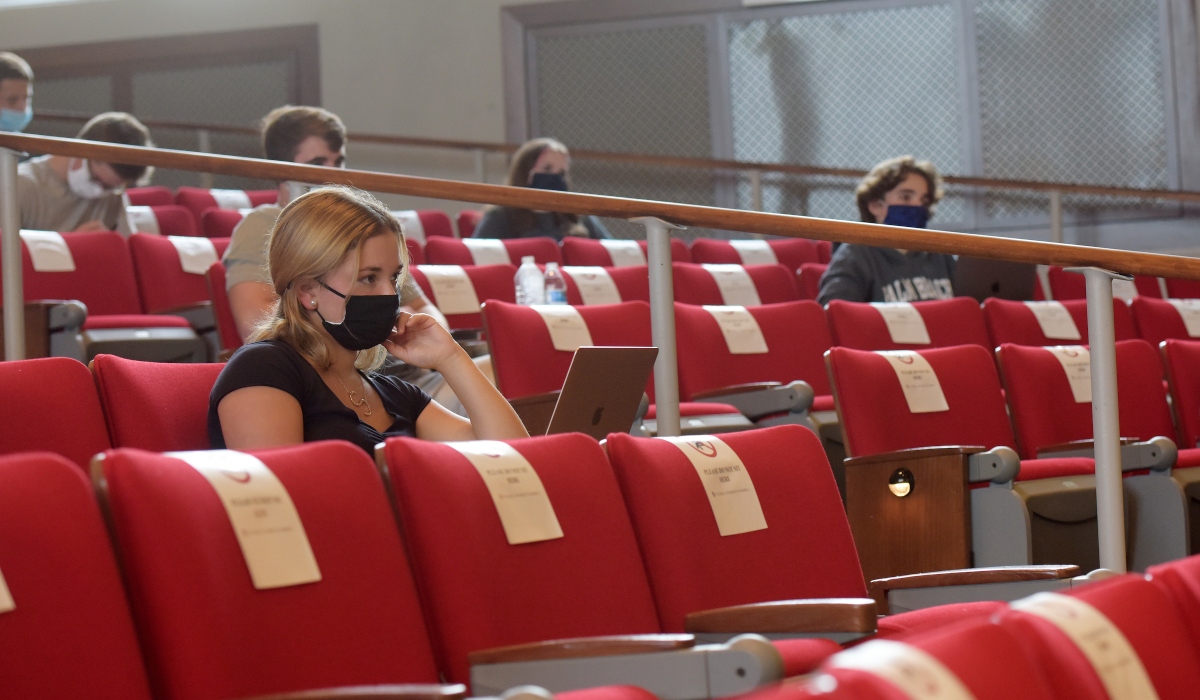 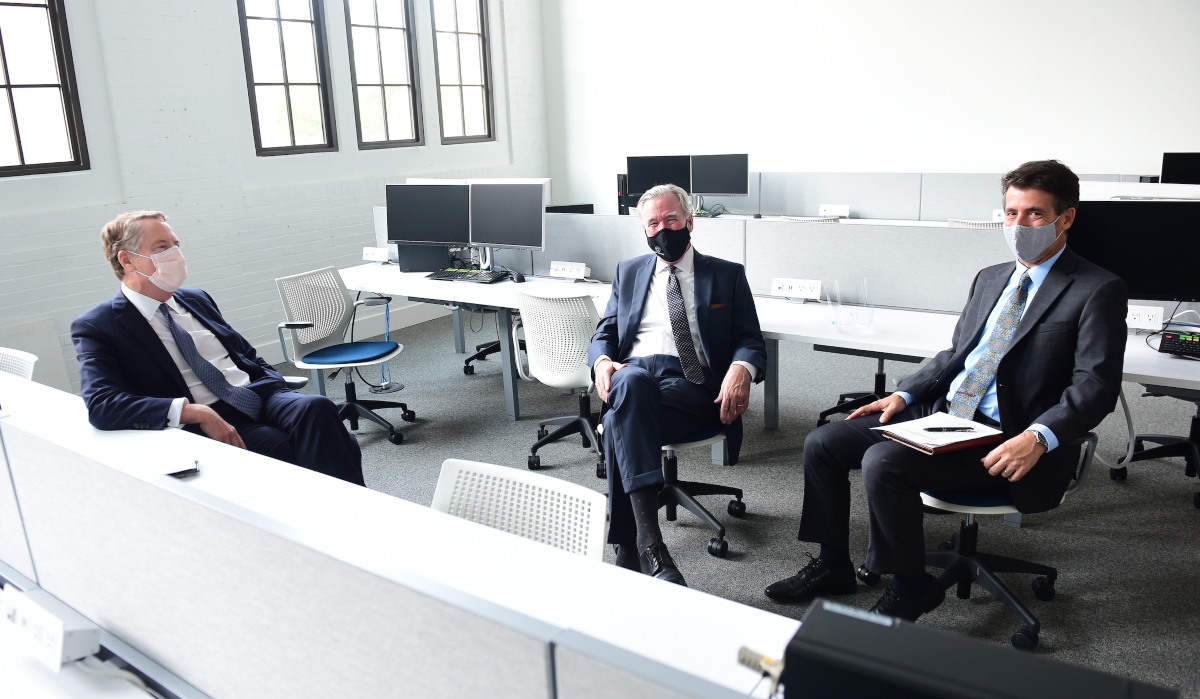 To kick off the first day of in-person classes for freshmen, the Busch School of Business hosted their first CEO lecture of the semester. U.S. Trade Representative (USTR) Robert E. Lighthizer spoke to a limited audience of students on Sept. 8 in the Della Ratta Auditorium of Maloney Hall. The lecture was also livestreamed for upperclassmen who are not currently on campus.

Prior to his appointment he was a partner at law firm Skadden, Arps, Slate, Meagher & Flom LLP (Skadden), where he practiced international trade law for more than 30 years. His work there on behalf of American workers and businesses in the heavy manufacturing, agricultural, high-tech, and financial services industries opened markets to U.S. exports and defended U.S. industries against unfair trade practices. Before joining Skadden, Lighthizer served as deputy trade representative under President Ronald Reagan and as vice chairman of the board of the Overseas Private Investment Corporation.

Lighthizer’s lecture examined the outlook of the Trump Administration’s trade policies in light of the broader history of U.S. trade policy. Detailing how the administration’s approach differs from those of the recent past, Lighthizer explained, “Our view is one that puts workers and farmers first. The primary objective should be the kind of community that you want, and then you decide what kind of people live in that kind of a community, and then you try to create jobs and an environment where that kind of a community is constructed,” said Lighthizer.

He then gave a brief history of U.S. trade policy, explaining that there was not a lot of trade in the colonial years other than with Britain. However, when the U.S. became an independent nation, it was primarily funded with tariffs and excise taxes.

“Over a period of time, people would use tariffs not just to fund the government, but also to protect some industries, or to help promote industries … and something called ‘The American System’ developed,” said Lighthizer. “[B]asically, we developed manufacturing in the United States largely assisted by tariffs.”

In World War I, he continued, “There was a lot of trade around the world that didn’t stop people from going to war. The United States came in late but got kind of a boost from that in terms of its own economy.

Lighthizer explained that after World War II, a public policy consensus developed in favor of the United States lowering tariffs and encouraging allied countries to grow. “To some extent we benefited [from that set of policies], but to a lot, we lost economically,” Lighthizer said. “At the end of the war [countries] negotiated something called the International Trade Organization, or the ITO, but it was [controversial] and it was never really approved by the United States. And then you had … the General Agreement on Tariffs and Trade, which is basically just a structure that we would all have tariffs and that we would keep them all the same, and that really became the architecture for the whole economics of the world, but in particular, trade.”

“So this went on for a long time. The United States was doing the right thing, it was helping the world get richer,” Lighthizer said. “Eventually, we believe, it got to the point where it was too expensive for us, we had no particular reason to keep doing it, and so you needed some kind of change. And in our opinion, we needed a restructuring, kind of a reset on what our trade objectives should be.

“So we have challenged some of the orthodoxy in favor of putting America first.”

He concluded his opening remarks, “My hope is that you start thinking about [some of these ideas] and that [they become] part of how you analyze public policy and ultimately, for some of you, what you want to do.”