Rome School Presents The War of the Worlds

Members of The War of the Worlds cast rehearsed for weeks via Zoom. When it came time to record their parts of the radio play, they took to makeshift sound studios using their closets in their homes off campus and across the country. Above: Julie Cray Leong (ensemble).

A Legendary Tale of UFOs is Back in Time for Halloween

“There won’t be any more concerts for a million years or so, and no nice little dinners at restaurants. If it’s amusement you’re after, I guess the game is up.”

As those lines were read by the “stranger” during the first Zoom rehearsal for The War of the Worlds, director Matt Ripa, M.F.A. 2008, looked into his computer screen at his student actors. “You could see the hint of familiarity come across their faces,” he recalls. “It hit home.”

The radio play, set in 1939, is an adaptation of the H.G. Wells science fiction novel first published in 1898. Ripa chose the same script used in 1938, when the play was broadcast live across America at 8 p.m. on Halloween eve. It was presented as an episode of the radio drama anthology series “The Mercury Theatre on the Air,” was directed and narrated by a young Orson Welles.

The play would become infamous for allegedly causing widespread panic across the country. Newspapers reported that listeners believed the scripted news bulletin “interruptions” that reported aliens landing in New Jersey and wreaking death and destruction all the way to New York City, as well as invasions across the country.

With a novel coronavirus leaving its own path of death and destruction in the United States and across the world this year, the parallels to an alien invasion might just make this a play for our time in more ways than one. This new production is set for public online release Oct. 29 - Nov. 1.

The ”best-laid plans” might well be the theme for 2020. The Benjamin T. Rome School of Music, Drama, and Art’s well-planned fall season that would have kicked off with the hit rock musical Next to Normal had to be put aside in favor of virtual opportunities for the safety of both students and audiences.

“This is a tough time for artists,” says Ripa. “It’s not easy to see your industry closed, to see your work opportunities put on hold. Students are feeling that too, even though they are still in school. Artists are resilient. The Rome School is modeling that resiliency for our students. We’ve found creative ways to keep them engaged and involved in their craft.”

Ripa, who is operations coordinator for the Rome School, also runs the box office and teaches in the drama department’s undergraduate and graduate programs. As faculty and staff began to develop alternate plans for the school’s fall season in light of the pandemic, he says a radio play seemed like a perfect solution.

“There was such an excitement the night of the first read-through. It had been a while for many of us, but here we were back in that familiar place of doing what we love to do.”

Elena Anderson, a third year M.F.A. acting student, is an optimist. When the pandemic left theaters dark, she thought to herself, “I got in a good year-and-a-half of the up-close, in-your-personal-space, intimate acting training before our program went virtual.” As she began to think of contingency plans on her path to becoming a professional actor, voice-over work came to mind. Then she heard about auditions for The War of the Worlds.

“I’m a bit of a sci-fi nerd so I was familiar with the book and the movie and I would have been onboard for that reason alone,” she says. “On top of that, I was excited to try an all-voice-acting play. It was a great opportunity to dip my toes into this genre.”

Anderson was cast as one of the “announcers.” She comes on the air throughout the play’s planned evening of musical radio programming to deliver terrifying news bulletins — first of explosions sighted around Mars, then of a cylinder-shaped UFO landing in a field in Grover’s Mill, N.J., and soon after, of alien creatures attacking with a heat ray.

To help his cast of 13 actors prepare, Ripa had them listen to the original broadcast, along with other radio broadcasts of the era. “He wanted the announcers to work on a Transatlantic accent — an acquired accent with hints of an upper class British English. It is prevalent in movies from the 1930s and ’40s,” says Anderson. “I listened to a lot of broadcasts from that time period, and worked not just on the accent but on the pattern of speech. The cadence is very different from what you would hear when you tune into CNN today.”

Kyle Wyborski, a senior studio art major, was drawn to the play in part because he loves classical literature. He also loves exploring complex characters. Wyborski takes on the lead role of Professor Pierson, originally played by the then 23-year-old Orson Welles 82 years ago.

“My character is a man of science, a well-respected Princeton University professor,” says Wyborski. “He starts out self assured as he offers explanations for the flares spotted on Mars. But as the story unfolds, and there is no denying the alien invasion, he tries to come up with scientific explanations. His journey eventually takes him to the acceptance that what he knows only covers a small part of the world”

Wyborski calls radio acting “both easier and harder compared to other forms of acting. When on stage or on film, you have your body and your face to help tell your story. So you do have to be aware of where you are standing, how you are using your body to react, and what your facial expressions are saying. In radio acting, you only have to be concerned with your voice. But you also have nothing else to rely on to push you that extra mile.”

In considering his character’s journey, Wyborski pondered the similarities to 2020. “Right now we are in a state of limbo. We are defined by uncertainty. This play is very much about uncertainty, especially for my character. And to some degree, it is about embracing uncertainty.”

Considering the historical context of the play and its current relevance were parts of the rehearsal process and led to interesting Zoom discussions.

“There has been a lot of research that points to the fact that there was no mass panic resulting from the 1938 radio broadcast,” says Ripa. “It was the newspapers who embellished the story, some believe in an effort to discredit radio, or more simply to sell newspapers. The term ‘fake news’ was not in the lexicon back then. But that parallel came up.”

“What saves everyone is the planet they live on,” says Anderson. “The Martians are ultimately defeated by the earth’s microbes. They make up the smallest part of our ecosystem, but can have such great impact. The pandemic has brought home that we need to respect that.”

Anderson says another theme that rings especially true today is simple. “The play explores what unites and divides us as a society. As humans our job is to come together. If we can’t do that, we are all lost.”

While the play offers parallels to 2020, Ripa hopes it also offers something new amid all the loss resulting from the pandemic. “There is so much we can’t do right now. This play offers people something they can do. I hope they gather safely in small groups with family and with friends to listen to a great story that’s just as compelling, and perhaps as terrifying, as it was 80 years ago.”

— Ellen N. Woods is director of Creative Services. She can be reached at woodse@cua.edu. 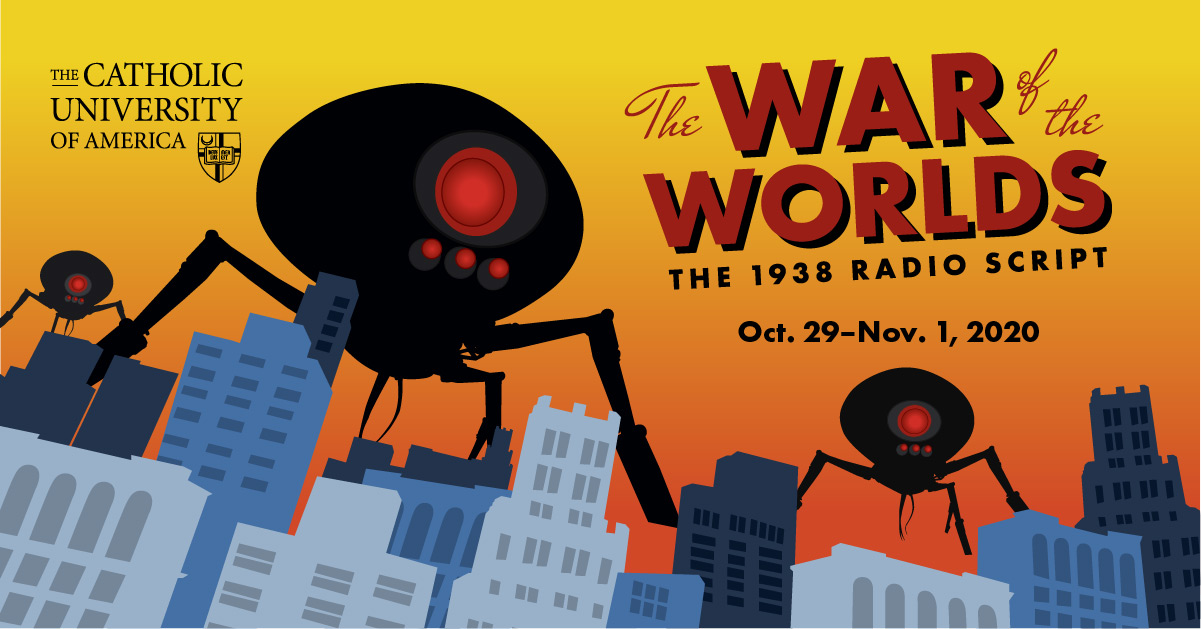 The Rome School production of The War of the Worlds is available online Oct. 29 – Nov. 1. For more information on this play and the Rome School’s entire fall season, check out the Fall Arts Preview.

The Rome School production of The War of the Worlds is available online Oct. 29 – Nov. 1. For more information on this play and the Rome School’s entire fall season, check out the Fall Arts Preview.