Provost Named American Association for the Advancement of Science Fellow 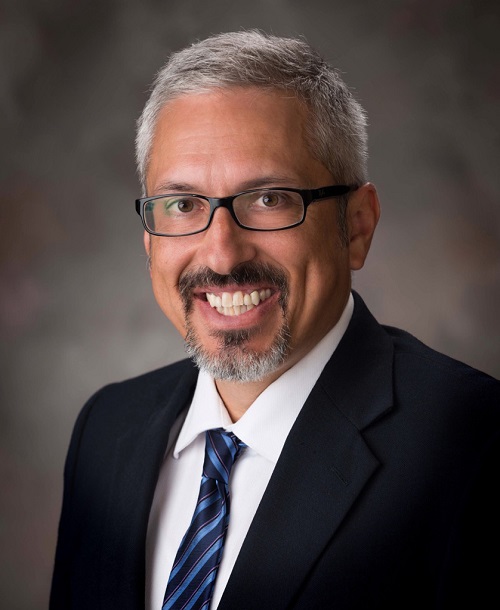 Aaron Dominguez, provost and professor of physics, has been named a Fellow of the American Association for the Advancement of Science (AAAS).

AAAS is the world’s largest general scientific society and publisher of the journal Science. This year, 489 members have been awarded this honor by AAAS because of their scientifically or socially distinguished efforts to advance science or its applications.

As part of the Industrial Science and Technology section, Dominguez was elected as an AAAS Fellow for distinguished contributions to experimental high-energy physics.

Dominguez’s main area of research is using particle colliders to search for new particles, including the recently discovered Higgs boson. His area of expertise is in instrumentation — designing, building, and using silicon charged particle trackers as precision tools to reconstruct the complicated interactions taking place in these collisions.

“The kind of scientific work I do is very collaborative and practically none of what I have accomplished has been done alone,” Dominguez says. “This is a recognition of the great teams I have been fortunate to work with over the years. It is also emblematic of the kind of excellent work and recognition that has happened here at The Catholic University of America over the decades. This has truly always been a great global Catholic research university in the United States.”

The naming of AAAS Fellows began in 1874, and CatholicU researchers have been a part of this tradition since 1891. That year, George Searle was named an AAAS fellow. He founded the University’s observatory and was awarded the University's first doctorate in 1896. Searle made many contributions in astronomy; he discovered the asteroid Pandora in 1858, and his computation of the orbit and reappearance of Halley's comet in 1910 was considered definitive by American astronomers.

“Catholic University has a long history as a research University, with many leading scientists who have come to the University over the years and have made important contributions to the nation,” Dominguez said.

“This is a great honor and I am humbled by it. It brings to the forefront of my mind all of those who sacrificed and supported me in my life and career so that I would have these kinds of opportunities. For this I am grateful and wish to pay it forward.”

Fellows must have been continuous members of AAAS for four years by the end of the calendar year in which they are elected. In order to be considered for the rank of Fellow, an AAAS member must be nominated by three previously elected Fellows, the steering group of an AAAS section, or the organization’s CEO. The AAAS Fellow honor comes with an expectation that recipients maintain the highest standards of professional ethics and scientific integrity.

This year’s AAAS Fellows will be formally announced in the AAAS News & Notes section of the journal Science. A virtual Fellows Forum — an induction ceremony for the new Fellows — will be held on Feb. 13, 2021.