Ten Years Ago: Looking Back at the Garvey Inauguration 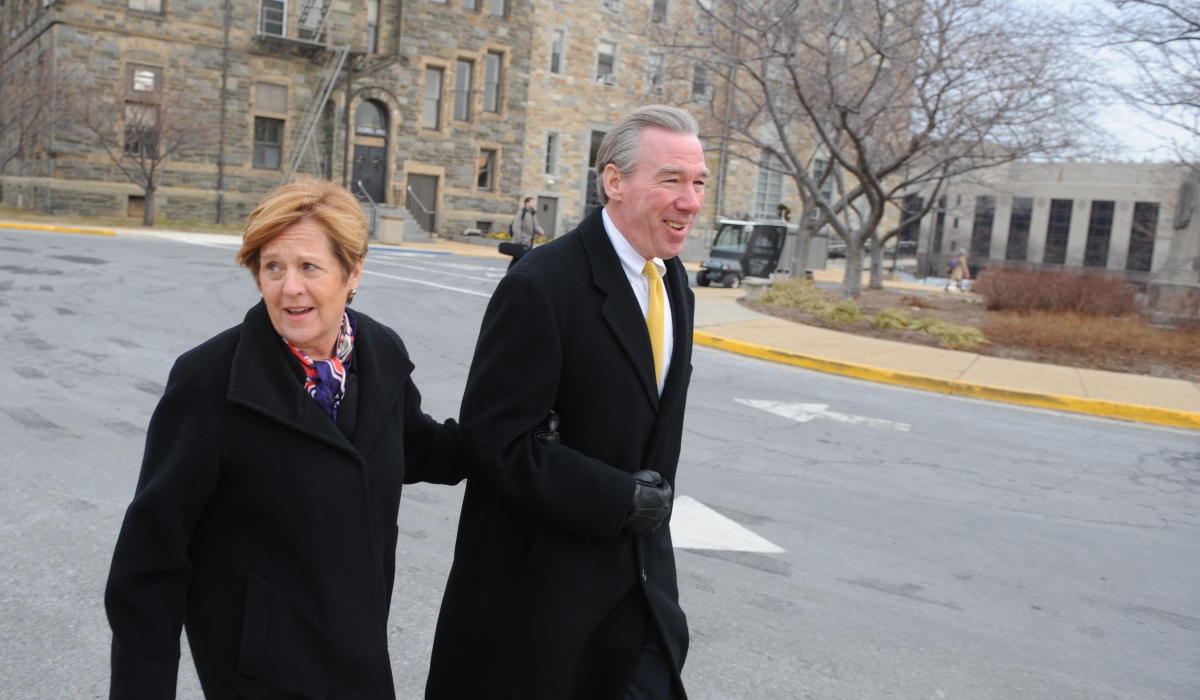 John and Jeanne Garvey walk to the Basilica to celebrate his inauguration as the 15th president of Catholic University on Jan. 25, 2011. 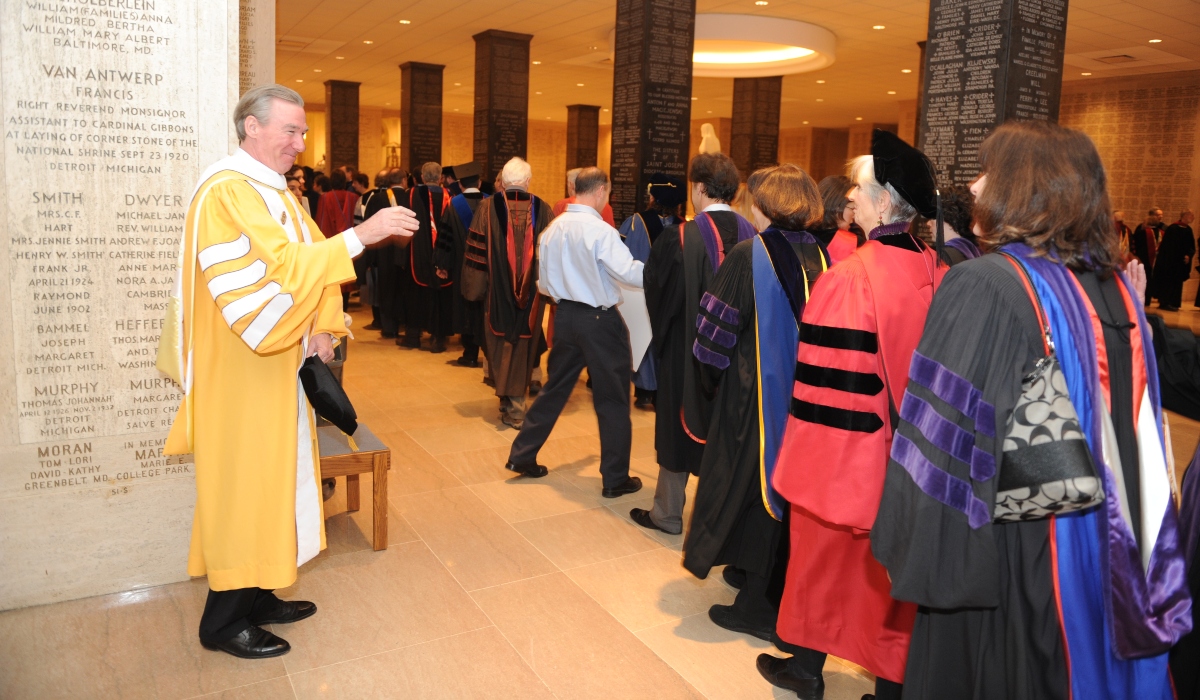 President Garvey greets faculty in the Crypt Church as they prepare to make their way to the Great Upper Church for the inauguration Mass and ceremony. 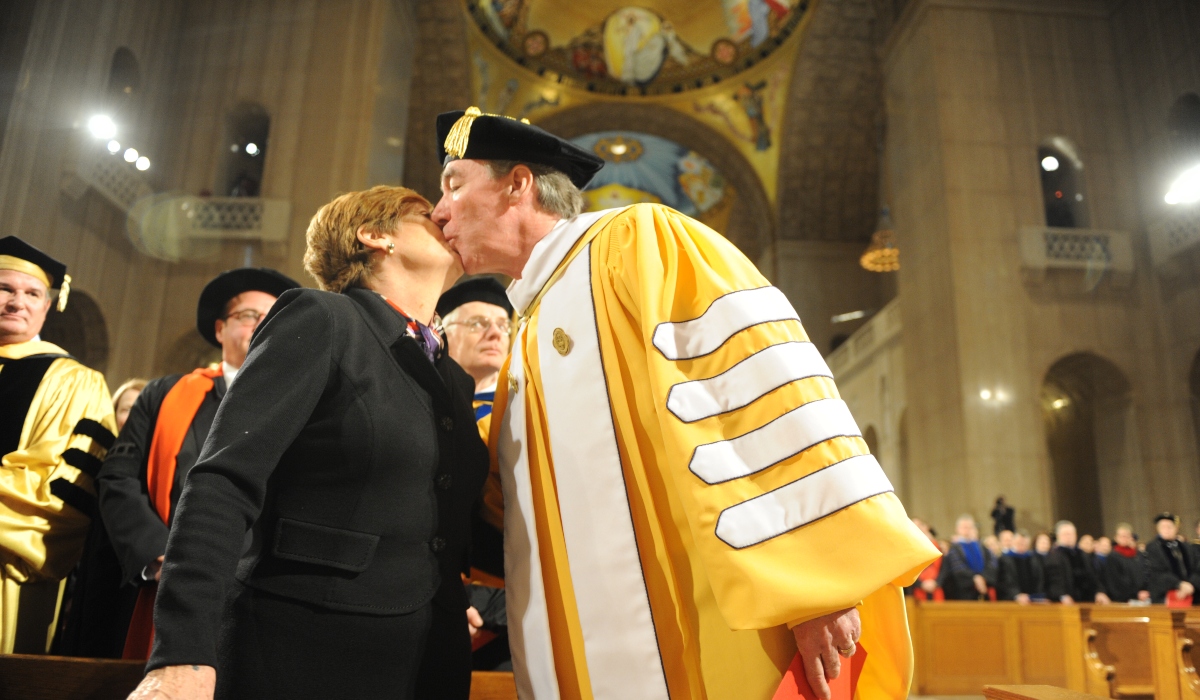 Jeanne Garvey congratulates her husband after he delivered his inaugural address on "Intellect and Virtue." 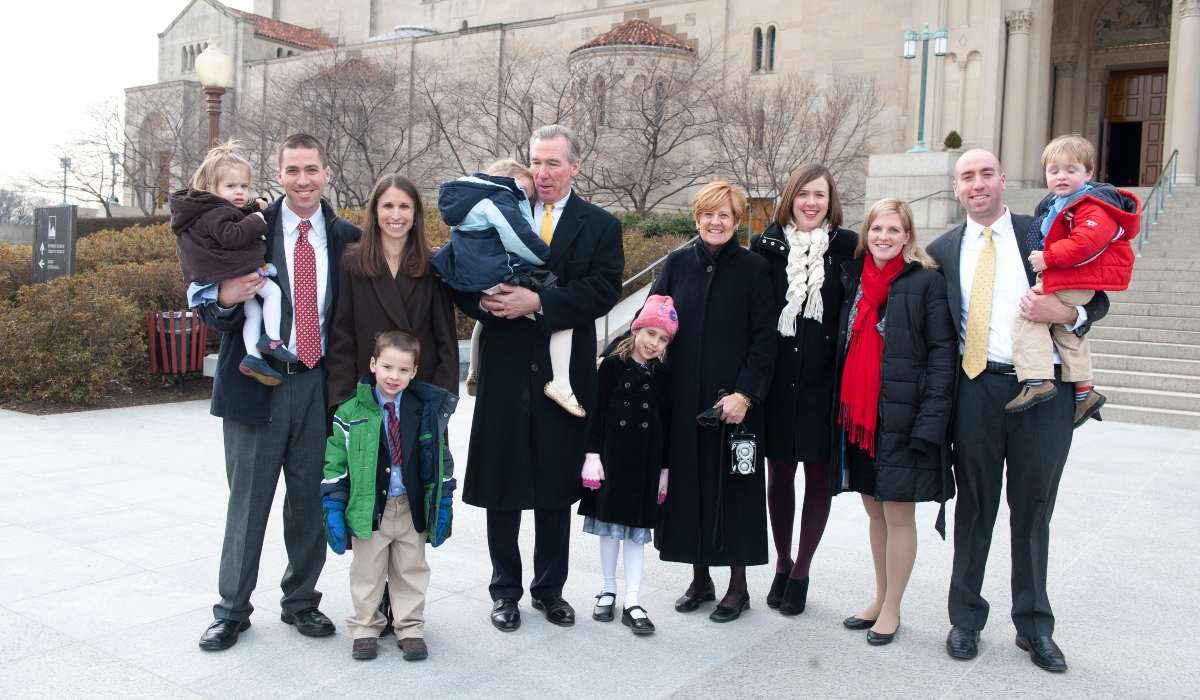 President Garvey was greeted by his children and grandchildren following the Mass.

The Mass and installation ceremony of John Garvey as the University’s 15th president took place Tuesday, Jan. 25, 2011, at 10 a.m. in the Basilica of the National Shrine of the Immaculate Conception, Great Upper Church.

Garvey had arrived at the University to begin his tenure as president the summer before. He took the helm from Bishop David M. O’Connell, C.M., who served as University president for 12 years.

Garvey began his presidency with a listening tour, most notably stopping by the Edward J. Przybyla University Center frequently to share meals and conversation with students. As the fall semester began, Garvey stated in a CUA Magazine interview, “I have never been so happy to have a new job as I am to have this one.”

As plans began for the inauguration, Garvey chose the theme “Intellect and Virtue: The Idea of a Catholic University.” He said, “I drew inspiration for the theme of the address from reading The Idea of a University by Cardinal John Henry Newman, who was beatified in September 2010. The book contains discourses delivered by Newman at the time he became the first rector of The Catholic University of Ireland in 1854.”

Intellect and Virtue was not just the theme of Garvey’s inaugural address; it was the theme of a semester-long discussion and celebration. Throughout the spring 2011 semester, the University explored the interplay of intellect and virtue with 20 lectures, symposia, and roundtables on the theme. Students, faculty, and staff embraced the topic and the resulting discussions, as did many representatives of higher education in the United States and abroad, who atteneded, provided input, and served as speakers.

In addition, throughout the semester, the four cardinal virtues were highlighted through lectures, service, celebrations, and pledges.

The inauguration was broadcast live by EWTN. Three cardinals, 15 bishops, and more than 80 priests concelebrated the Mass. Faculty, staff, students, and alumni attended, as did representatives of more than 80 colleges and universities.

Upwards of 50 members of Garvey’s family were seated at the front of the Basilica. His five adult children served as gift bearers during the Mass. “I was overwhelmed with pride. I was thinking about them as children and I thought about what wonderful, fine young people they have all become,” said Garvey’s wife Jeanne following the Mass.

A highlight of the installation ceremony and Mass was the music provided by the University orchestra, chamber choir, University Singers, University Chorus, Women’s Chorus, and Basilica musicians.

By the time of his inauguration ceremony, Garvey had already started teaching Constitutional Law II every Tuesday and Thursday afternoon to a class of nearly 30 undergraduates. Attention to the undergraduate experience quickly became a cornerstone of Garvey’s presidency.

“The measure of our success is how our graduates live their daily lives,” said Garvey in his inaugural address. “Do they pray and receive sacraments? Do they love the poor? Do they observe the rest of the beatitudes?”

University students hosted John and Jeanne Garvey at a formal inaugural ball. John McCarthy, B.A. 2013, who currently serves as senior advisor to the counselor for the president in the new Biden Administration, was on the committee to plan the student-run ball. “At the ball, as the Garveys’ shared their first dance, I watched the University students fall in love with their new president, and the Garveys fall equally in love with their new University family,” McCarthy said at the time.

— Ellen N. Woods, director of creative services. She can be reached at woodse@cua.edu.