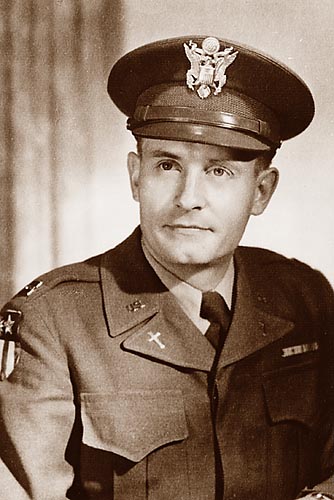 On Thursday, March 4, U.S. Sen. Jerry Moran (R-Kan.) announced that the Defense POW/MIA Accounting Agency of the Department of Defense had identified the remains of Catholic Priest Emil J. Kapaun. “This evening I was notified that the remains of Marion County [Kansas] native Father Emil Kapaun, a priest of the Diocese of Wichita, have been identified,” Moran said in a statement.

Father Kapaun earned a master’s degree in education at Catholic University in 1948. He was an army chaplain in World War II and the Korean War. He was captured by the North Koreans in 1950, and is still remembered for the sacrifices he made to protect his fellow POWs. He was known to forage for food, tend to the sick, and find ways to protect the men from physical harm. He died in captivity in 1951.

In 1993, Father Kapaun was declared a Servant of God by Pope John Paul II, the first step on the path to sainthood.

“It was a joyful and exciting surprise for the Diocese of Wichita that Father Kapaun’s mortal remains were recovered after so many years,” said Bishop Carl A. Kemme. “And we continue to look forward to his process of canonization in the future.”

President Barack Obama posthumously awarded Father Kapaun the Medal of Honor in 2013 in an East Room ceremony attended by family members of the priest. Obama detailed the heroism displayed by the chaplain to save lives during the Battle of Unsan in November 1950, running from foxhole to foxhole under enemy fire to drag wounded soldiers to safety.

“This is the valor we honor today,” said Obama. “An American soldier who didn’t fire a gun, but who wielded the mightiest weapon of all, a love for his brothers so pure that he was willing to die so that they might live. And yet, the incredible story of Father Kapaun does not end there.” The president then spoke about his ministry and bravery during captivity.

Father Kapaun was honored at an on-campus Veterans Day ceremony in 2016. Lawrence Morris, University chief of staff, gave a talk about the hero alumnus. “The Medal of Honor is a really rare thing and Father Kapaun earned it,” said Morris, a retired U.S. Army colonel and 30-year veteran. “It is rare because the expectation is so high. Soldiers are assumed to have such a high base of courage to begin with.”

“Father Kapaun is an inspiration to all of us in Catholic University’s military-affiliated community for his dedication to both our faith and our nation. His conviction and dedication are an example for those who enter military service after leaving our University,” said Stephan Murphy, Director of Military and Veteran Student Services.

Read more about CatholicU alumni on the path to sainthood.