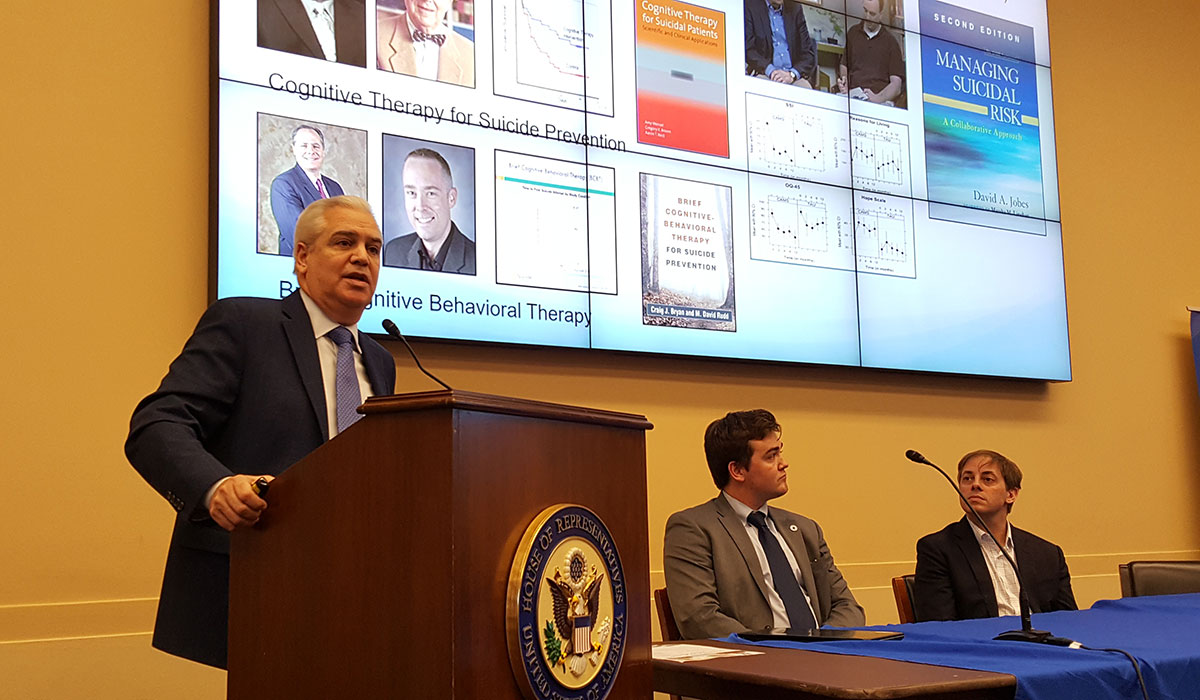 A recent rigorous meta-analysis of the Collaborative Assessment and Management of Suicidality (CAMS) showed that the intervention is Well Supported for reducing suicidal ideation per Centers for Disease Control criteria.

CAMS was created at The Catholic University of America by Psychology Professor David Jobes, who has dedicated more than 35 years to researching and implementing hisapproach to clinical suicide prevention. CAMS is a therapeutic framework for treating suicidal patients. The method quickly reduces suicidal thoughts (in six to eight sessions) and reduces overall symptoms of distress, depression, and hopelessness. It emphasizes collaborating with the patient, intentionally using the patient's experience of being suicidal to inform a suicide-focused treatment plan as a "co-author" of their own treatment.

The recent meta-analysis of clinical trials was performed by Joshua K. Swift, associate professor of clinical psychology, and his team at the Department of Psychology at Idaho State University. They investigated nine national and international studies — primarily randomized controlled trials (RCTs) — with data from 749 patients where the CAMS intervention was compared to treatment as usual or, in one study, with Dialectical Behavior Therapy (DBT). The new study has just been published in the suicide prevention field’s premiere peer-reviewed journal, Suicide and Life-Threatening Behavior.

"We are thrilled with the findings of this meta-analysis," said Jobes. "Our mission in our treatment research is to save lives through effective suicide-focused clinical care. The incredibly rigorous work of Dr. Swift and his colleagues clearly shows that CAMS provides highly effective care for the largest challenge we face in suicide prevention today: the massive population of people who struggle with serious suicidal thoughts.”

To date, close to 20,000 clinicians have been trained in CAMS, and Jobes says the goal is “to train many more so we can help decrease suicide-related suffering and deaths around the world."

The results of this meta-analysis provide strong evidence for CAMS as an intervention for people with serious suicidal thoughts, including 12 million adults in the United States in 2019. The results suggest that not only does CAMS outperform alternative active interventions, but that patients who receive CAMS are less likely to drop out of treatment prematurely and report greater levels of satisfaction compared to alternative treatment options. These findings appear to be consistent across time, settings, patient age, and ethnicity.

“CAMS is patient-centric,” Jobes said. “We emphasize empathy, collaboration, honesty, and a singular focus on treating and eliminating suicidal thoughts and behaviors. CAMS creates a strong therapeutic alliance and it also invariably motivates patients to fight for their lives.”

Globally, approximately 800,000 individuals die by suicide each year, according to the World Health Organization. The frequency of suicide-related deaths is a major concern in the United States where in 2019, there were 47,511 deaths by suicide, more than 1.4 million adults attempted suicide, and 12 million had serious suicidal thoughts.

Given the pervasive nature of this leading cause of death, studies have tested interventions addressing suicide-related deaths, attempts, self-harm, and ideation. Although suicidal ideation is often measured in studies of these common interventions, most studies focus on suicidal behaviors. Suicidal ideation is often not a direct treatment target.

"This omission is concerning given the substantial proportion of the population who experience suicidal thoughts and the burden of distress that it entails," said Swift. "It is important to target suicidal ideation, as research indicates that roughly 30% of those who experience suicidal ideation will make a suicide attempt and that ideation is a significant precursor for suicide attempts and deaths.

“Our meta-analysis focused on suicidal ideation rather than suicidal behavior or self-harm as primary outcomes because addressing suicidal ideation represents a notable reduction in suffering for many patients and may reduce the risk of later death by suicide," Swift said.

The CAMS method focuses strongly on what causes (called “drivers” in CAMS) a patient to have suicidal tendencies in order to prevent their feelings of distress and hopelessness.

“Within CAMS the final phase of care focuses on plans, goals, and hope for the future — a life worth living with purpose and meaning,” Jobes said. “We often treat relationship issues, vocational problems, and issues of self-worth that make people suicidal.”

There is ongoing research into the effectiveness of CAMS, including a multi-site study funded by the National Institute of Mental Health (NIMH) of CAMS with 700 college students who are suicidal and being seen at counseling centers at the University of Oregon, University of Nevada-Reno, Duke University, and Rutgers University.

Additional clinical trials of CAMS with youth who are suicidal are pending. According to a recent report from the Centers for Disease Control and Prevention, suicides among those aged 10 to 24 rose 57% from 2007 to 2018.

A highly modified electronic version of CAMS is central to a tablet-based application called "Jaspr Health," which is now being studied with NIMH-funding in clinical-trial investigations of patients who arrive in the emergency department and other outpatient settings experiencing suicidal thoughts.

"Additional research investigating the effectiveness of CAMS will be important," said Swift, "as evaluating CAMS for features such as cost-effectiveness could facilitate the implementation and dissemination of this evidence-based treatment while enhancing clinical outcomes, all of which are important to saving lives from suicide."

David Jobes presented his research on suicide prevention in the keynote presentation at Catholic University’s annual Research Day in 2020.