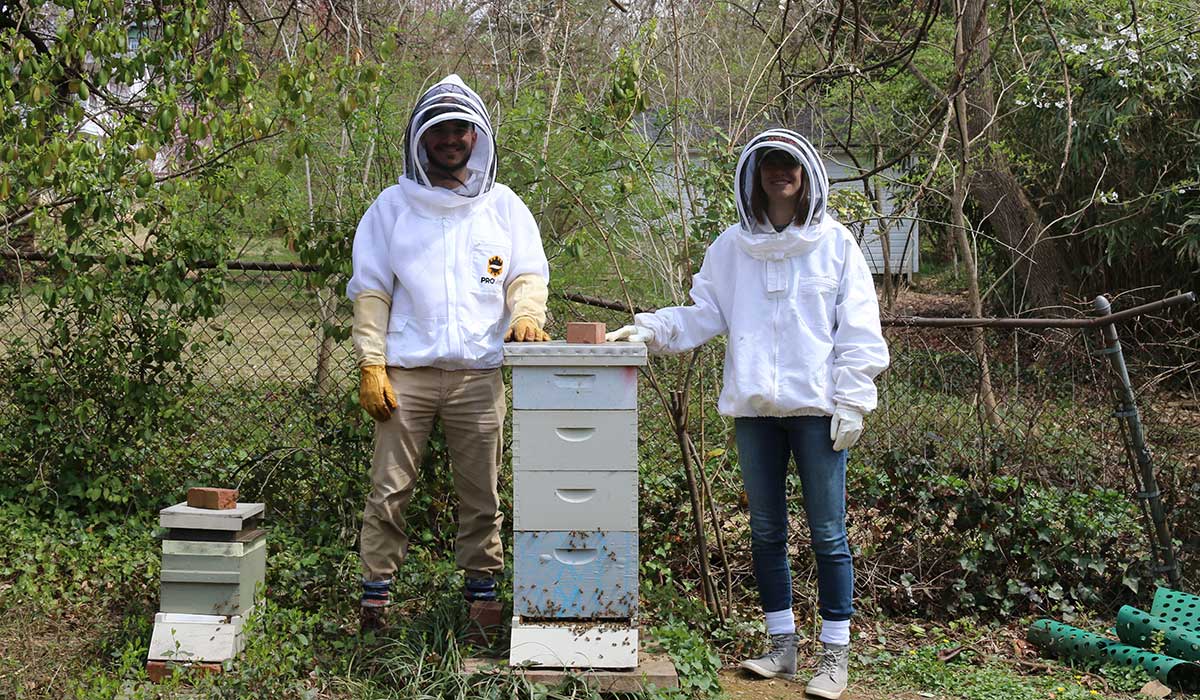 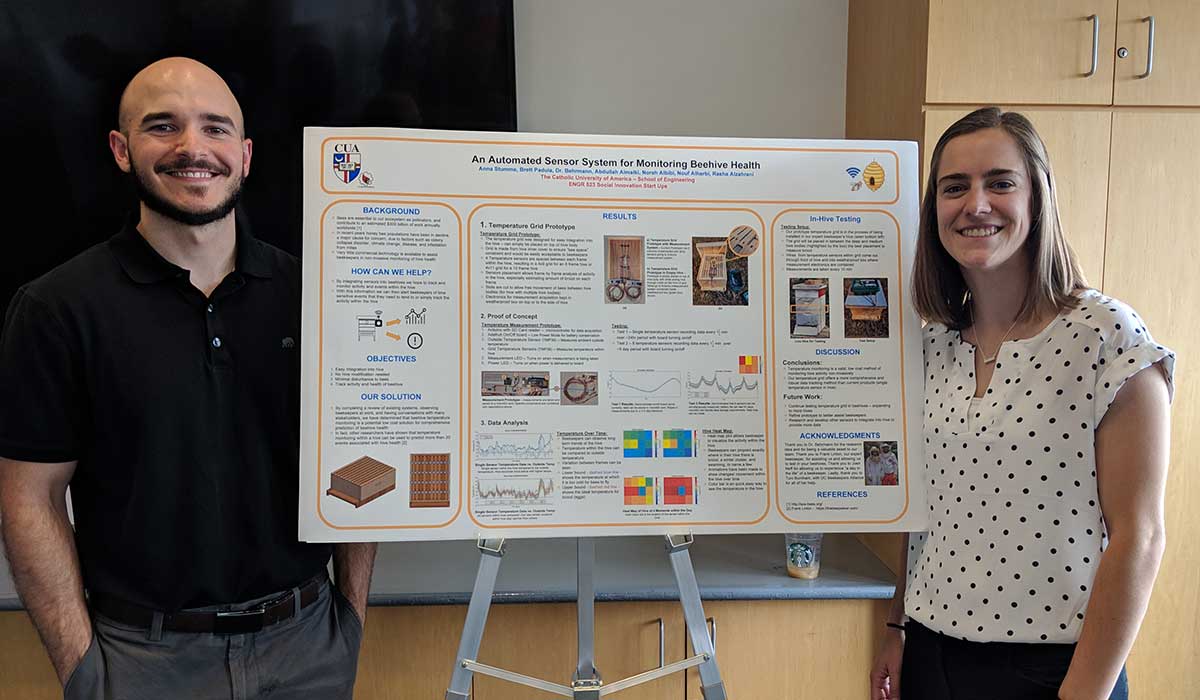 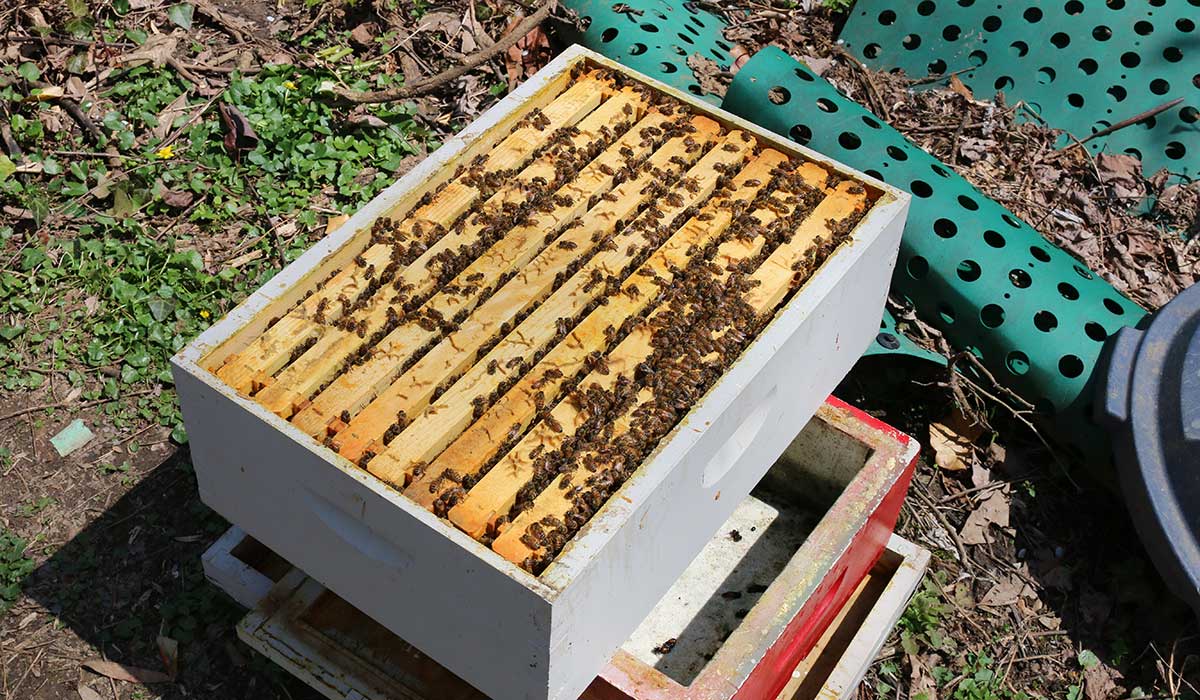 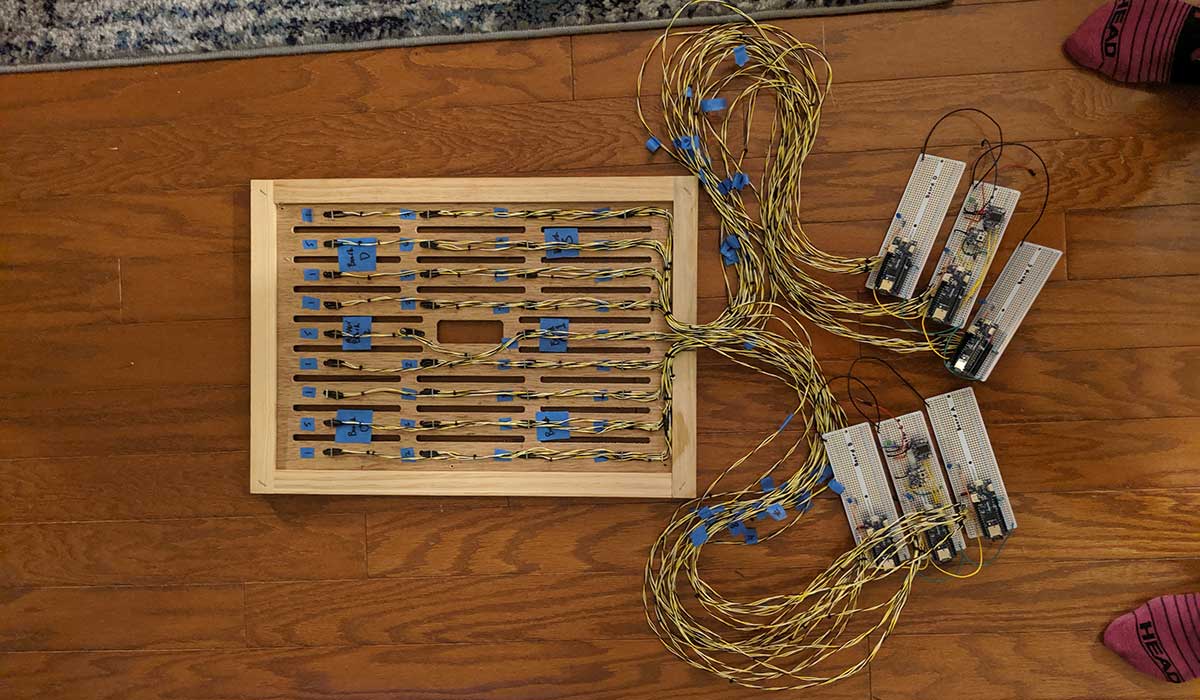 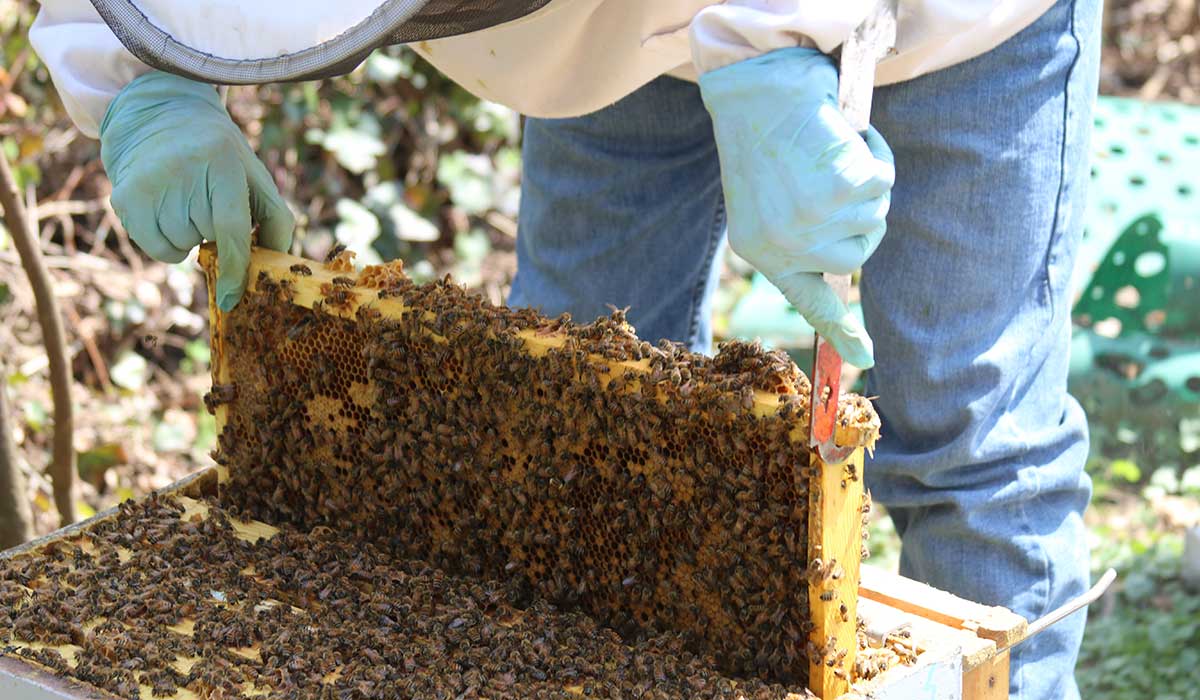 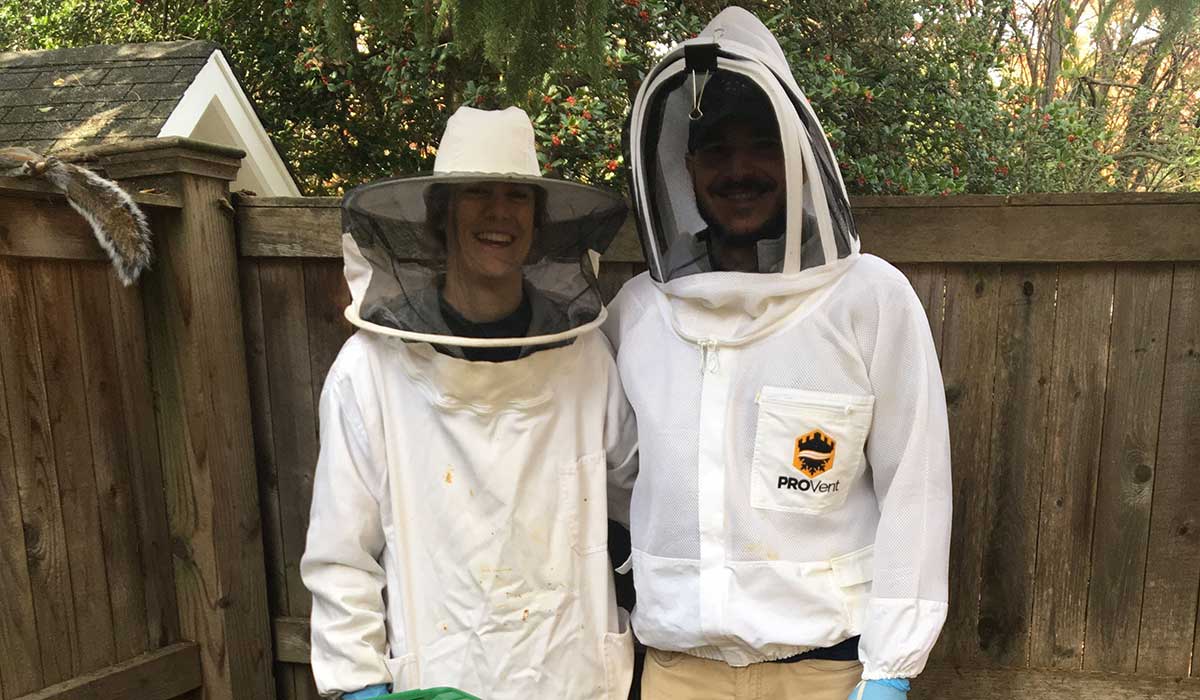 A beehive tracking device designed by Catholic University engineering students has now been in use by a local beekeeper for more than two years. The monitoring system, which was built by then-graduate students Anna Stumme and Brett Padula, was part of a project for the pair’s Social Innovations course, taught by Greg Behrmann, a clinical associate professor of engineering, with part-time associate professor and Ciocca Center Fellow Chris Danek.

Every year, students in the Social Innovations Course are tasked with building a company around a product and reaching out to consumers who would be willing to share their feedback. The goal is to design something user-friendly that will solve a real world problem.

The idea for a project related to beekeeping came from Behrmann, who was interested in beehive monitoring after learning about the dangerous decline in bees around the world. He suggested Stumme and Padula take up the challenge and encouraged them to reach out to the D.C. Beekeepers Association for more guidance.

“I proposed this as a topic with no specific solution — what could we monitor to determine the health of a beehive,” Behrmann said. 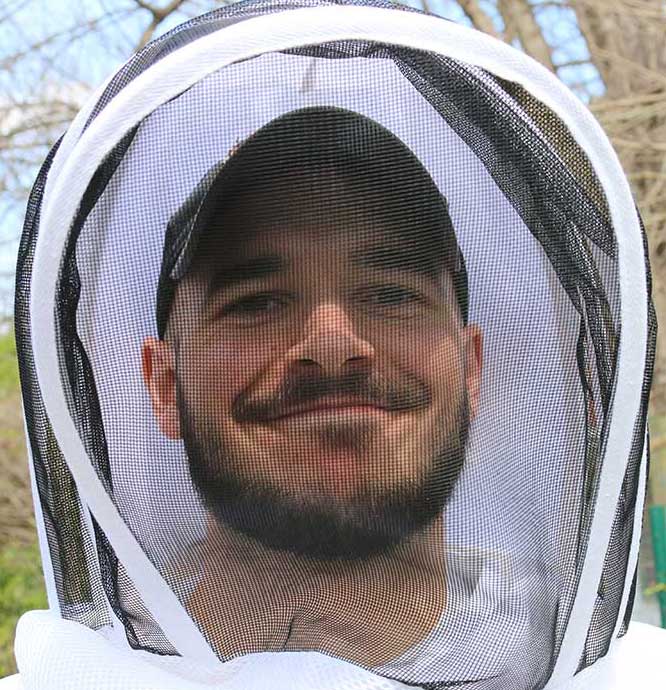 Both Stumme and Padula had previously earned their bachelor’s degrees in engineering from CatholicU while also competing as student-athletes. Stumme said she was interested in working on the beehive project because it was something completely new to her.

“I didn’t know much about beekeeping, but it just seemed like an interesting project and something that would give you a very different experience than what you would get in a class,” she said.

The students connected with Frank Linton, a beekeeper who lives in Maryland. Linton was interested in working with the team because of his past career as an artificial intelligence engineer. As a beekeeper, he has been experimenting with various kinds of sensors and temperature gauges since 2005. He reports on his experiences and those of others at his website colonymonitoring.com.

Linton was interested in learning more about the hive temperature because healthy bees naturally keep their brood at a certain temperature.

“You can tell quite a lot from the temperature; you can tell if there is brood or not, and if they’re alive and well,” he said. “If you had a whole array of temperature sensors in the hive, you could tell more about the brood, including how large it is, how much it is growing or shrinking, and where they are in the hive — are they up by the honey or down below?”

The system designed by Stumme and Padula consists of a grid of temperature sensors embedded in a wooden panel. The setup is designed to slide between beehive components and is in place all year long.

“We built it in Pangborn and Anna did a lot of the work at home, testing it in her apartment before we deployed it,” Behrmann said.

One of the most interesting parts of the project, according to Padula, was installing the system in person.

“You get a little nervous when you’re gearing up and putting on the suit because the bees are only a few inches from your eyeballs,” he said.

“You’re supposed to stay calm because most animals can sense fear,” Stumme said. “Once you get over that, they’re not going to hurt you.”

The final system — an array of temperature sensors — runs 24 hours a day and records data to an SD card. The students programmed the software and designed the sensor array to be as efficient as possible. Linton checks the sensors every two weeks to collect the data and change the batteries.

“I can see where the brood is, how healthy it is, and how quickly it’s growing or shrinking, and then from the brood you can make inferences about the queen, to determine if she’s doing well or doing poorly,” he said. This past winter, the system was helpful in keeping tabs on how the colony was doing.

“This was really key because starting at the end of February, the queen needs to be laying eggs like crazy to be ready for the dandelions in mid-April,” he said. “We want to make sure they have enough food, that they’re growing and that they’re reaching the brood temperature of 95 degrees.”

While there are other places that sell sensors, Linton believes the one designed by Stumme and Padula might be the best one out there. Linton presented his findings using the sensor system as part of a three-part series in The American Bee Journal and an international conference.

“With 36 temperature sensors, it gives a very finely detailed picture of how the hive is doing,” he said. “It really is a groundbreaking system that has the potential to give a lot more detail of what’s going on in a beehive than conventional systems do.”

Even though they both have since graduated and now work full time (Stumme at the Naval Research Laboratory and Padula at the Army Research Laboratory), Stumme and Padula have kept working on the project. They check on the system a few times a year to make updates and ensure that it is still working properly. Stumme, who is in a doctoral program in electrical engineering at Penn State, says she enjoys being able to work creatively on a project that is so different from her day-to-day work.

“With this project, there’s been way more challenges just having to figure out stuff you don’t really know or aren’t good at,” she said. “I’ve done more of the programming for the microcontroller we use for the temperature sensor, which hasn’t always been my strong suit or what I focused on. It’s something I wouldn’t have seen myself doing, just rolling with the unknown like this.”

“It’s different from what I do at work,” he said. “It’s interesting to see how you might build a project from the ground up.”

Linton said he is impressed and grateful for the way in which Stumme and Padula have stuck with the project.

“I am so grateful for their energy,” he said. “They have work, they have jobs, they’re in grad school and presumably they have a life, and then there’s this project.”

— Katie Bahr, assistant director of media relations and communications. Bahr can be reached at bahr@cua.edu.