Even with many students not yet back on campus, The Catholic University of America had a strong showing for the 2022 March for Life, with about 300 students walking behind a new, cardinal-red banner proclaiming, “We are 100% pro-life.”

Elena Buono, a freshman from Arlington, Va., had always attended with her parents, but enjoyed participating with new friends.

She considers the below-freezing temperatures part of the pro-life witness. “It’s worth it for the children. Offer it up for those unborn babies,” she said.

The Catholic University of America is a top-tier sponsor of the March for Life. Classes are cancelled during march hours because so many students attend. Students volunteer the night before at the National Mass and Vigil for Life in the Basilica of the National Shrine of the Immaculate Conception, and the University traditionally hosts out-of-town participants. This year, that hospitality was suspended due to COVID-related precautions.

The University also sponsored the Archdiocese of Washington’s popular Mass and Youth Rally for Life, which was held at the Cathedral of St. Matthew this year, scaled down, but back in person and broadcast virtually.

The University’s new video spots were shown on jumbotrons during the march and shared on social media. The taglines include, “The Catholic University of America – where pro-life leaders are made” and “Educating leaders of today for the generations of tomorrow.”

Kelsey Nowack, a senior from Wisconsin helped to carry the “100% pro-life” banner.

“I’m very proud of our university’s commitment to the pro-life cause, supporting all people from conception until natural death,” she said.

As part of their commitment to life, students brought hygiene packs with them to distribute to people experiencing homelessness.

The March for Life “has always been one of the cornerstone events of the University. Part of the mission of the University is engaging students in dialogue about what it means to be pro-life throughout the year,” said Amanda Schleimer, associate campus minister for women’s ministry and pro-life hospitality.

Father Jude DeAngelo, OFM Conv., the university chaplain and director of campus ministry, said that the turnout in the face of COVID and frigid temperatures shows there is “a real sea change in our country and young people today are really pro-life.”

At a Cardinals for Life rally the night before the march, University President John Garvey called for continued dedication if the U.S. Supreme Court strikes down Roe v. Wade - the 1973 U.S. Supreme Court decision that legalized abortion nationwide – later this year.

A decision to offer greater protection to unborn children “will be a step in the direction of justice for the unborn. There will be victory in that. But we will still have work to do,” he said. Advocacy will move from the high Court to 50 state legislatures.

He drew a parallel to Abraham Lincoln’s final speech, given just after the Civil War ended. Lincoln called for reconstruction of the South “with malice toward none; with charity for all.”

The most difficult task will remain persuading individuals that unborn babies have a right to life, President Garvey said.

“Patience and dialogue are key. But our words will mean little if our actions don’t reflect a deeper commitment to supporting life in the womb. That means listening to what mothers and babies need, especially those in difficult circumstances. It requires putting more, not fewer, resources at their disposal.”

In a virtual presentation to the students, Los Angeles Auxiliary Bishop Robert Barron – a best-selling writer and evangelist – emphasized that moral truths about human dignity aren’t matters of personal opinion, but are as irrefutable as the principles of mathematics. He urged students to engage pro-choice acquaintances by first finding common ground on moral issues such as racism, then extending the idea of moral truth to unborn children.

The fact that evils such as Jim Crow plunged from mainstream practices to “lunatic notions” shows that advocacy can make a difference, he said.

“Cultures can change,” Bishop Barron said. “Please God, in 50 years or 100 years, people will say that only a mad person would accept the legitimacy of abortion. Perhaps that day is coming even sooner than some of us had hoped for.” 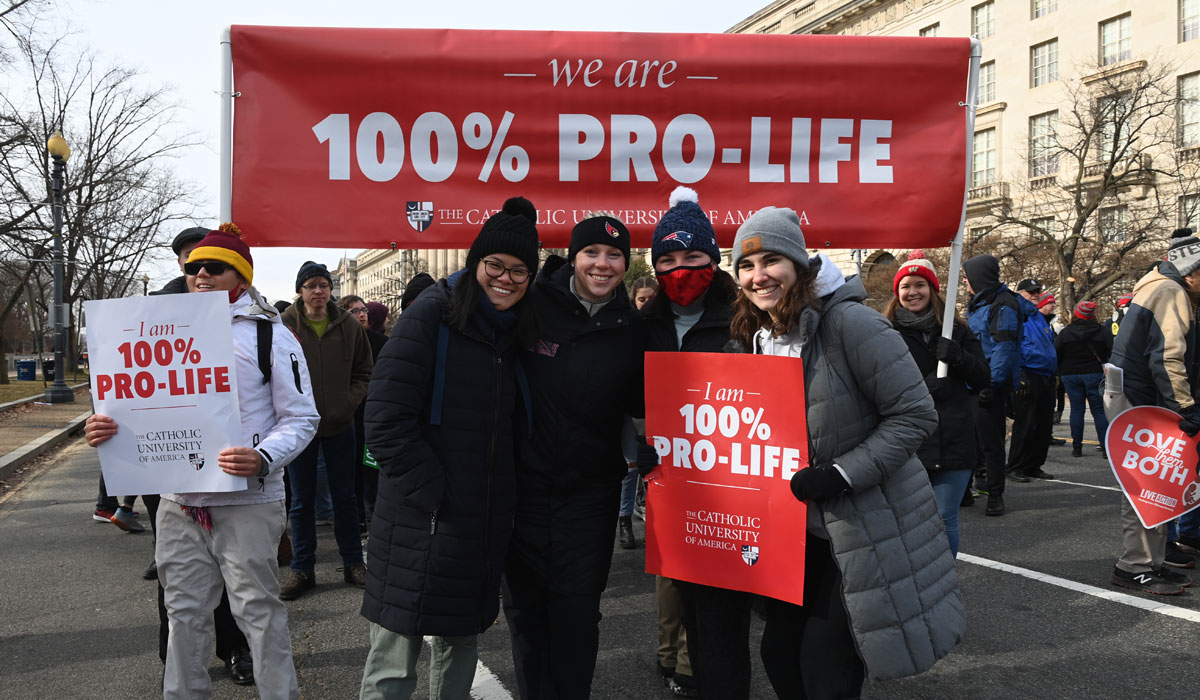 Nick Swanson, a senior from Minnesota and president of Cardinals for Life, organized the rally.

“We march to remember the one-third of our generation that is missing and to be a voice for all those unborn children who cannot speak for themselves,” he told the assembled students.

Participating in March for Life events “is one of the hallmarks of being a student at the Catholic University of America,” he said in an interview.

“We are marching not just against abortion but for a totally different vision of life, one that sees children not as burdens but as unrepeatable gifts of God’s love. I will take that with me, and so many students will take that with them when we graduate.”