The Legacy Of Pope Emeritus Benedict XVI At Catholic University 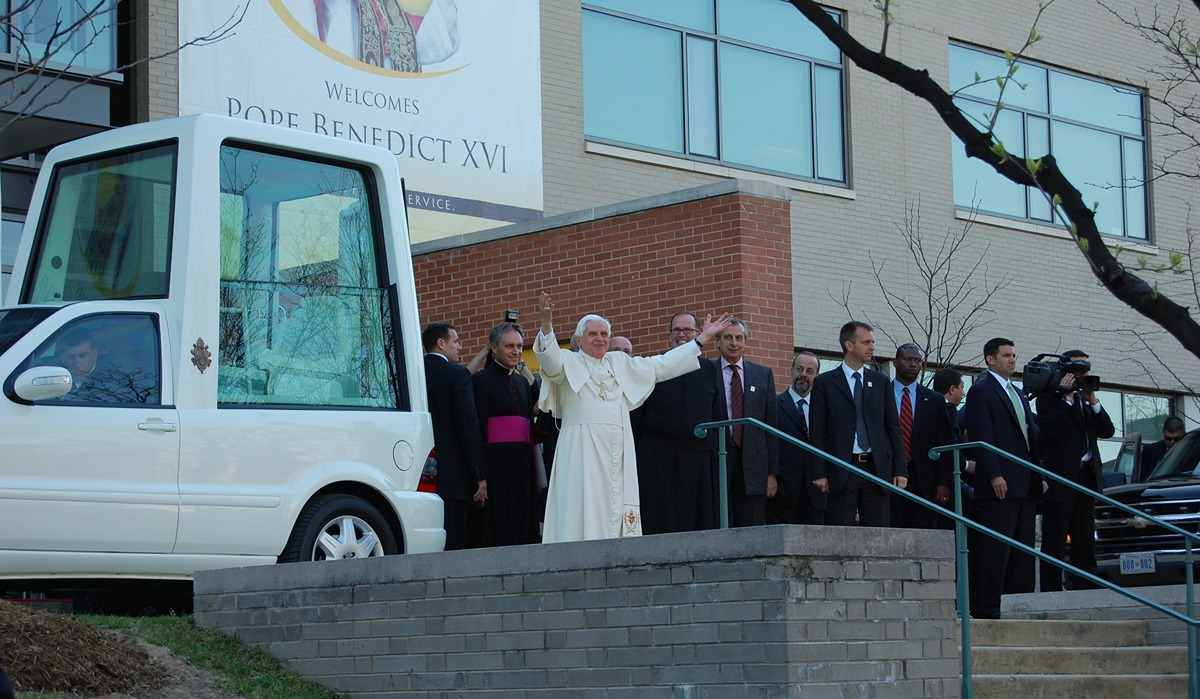 Following Pope Emeritus Benedict XVI’s death on Dec. 31, The Catholic University of America community remembered the former pontiff who visited the campus on April 17, 2008 and left an indelible mark on the University.

“The Catholic University of America mourns his death along with the Church and so many other people whose lives he touched. We will remember him for his love of education, dedication to teaching, and deep theological insight, which he shared in person at the University when he visited in 2008,” said University President Peter Kilpatrick said. “At that time, Benedict gave a historic speech at the Edward J. Pryzbyla University Center about the value and importance of Catholic education.”

“Through our grateful prayers for him, may Pope Benedict soon stand with the saints in blessed awe before God,” said Father Aquinas Guilbeau, O.P., Catholic University’s chaplain and director of Campus Ministry.

Catholic University is one of only three universities in the United States to have hosted a Pope on its campus and it is the only one to have done so three times — St. John Paul II in 1979, Pope Benedict XVI in 2008, and Pope Francis in 2015.

In the first two visits, St. John Paul II and Pope Benedict XVI used the occasion to address educational leaders gathered from around the United States. In 2015, Pope Francis celebrated Mass on the East Portico of the Basilica of the National Shrine of the Immaculate Conception in front of a congregation of 30,000 people gathered on Catholic University’s mall.

During his visit to Catholic University’s campus, Pope Benedict rode in his vehicle in front of the Pryzbyla Center. He stretched his arms out to the crowd gathered, smiling and waving to those gathered outside.

He made his address inside the Great Room at the facility, where he was surrounded by cardinals, bishops and educators who rose to their feet in applause.

“We are profoundly humbled and deeply grateful that you have asked to spend some time with us during your historic, apostolic visit to our country,” Bishop O’Connell said at the time. “Your own experiences as a university professor create a special bond between us, Your Holiness. It is not, however, simply a matter of a shared academic profession that joins us today but, rather, it is a shared vision of truth, a shared conviction of faith, and a shared sense of hope that leads us once more, as Catholic educators, to an encounter with the person of Jesus Christ who is the Truth, who calls us to faith, who strengthens us in hope and, finally, redeems us in love.”

Pope Benedict reminded the educators of their calling during a rousing address and encouraged them on their mission.

Before parting with the gathered group at Catholic University, Pope Benedict XVI added, “To all of you I say: bear witness to hope. Nourish your witness with prayer. Account for the hope that characterizes your lives by living the truth which you propose to your students. Help them to know and love the One you have encountered, whose truth and goodness you have experienced with joy.”

A Memorial Mass for Pope Emeritus Benedict XVI will be celebrated at 5:10 p.m. on Jan. 12 in St. Vincent’s Chapel. All students, faculty, and staff are welcome to attend.

About Catholic University’s mission: Dedicated to advancing the dialogue between faith and reason, The Catholic University of America seeks to discover and impart the truth through excellence in teaching and research, all in service to the Church, the nation and the world.