Catholic University continues the fight for life at national March 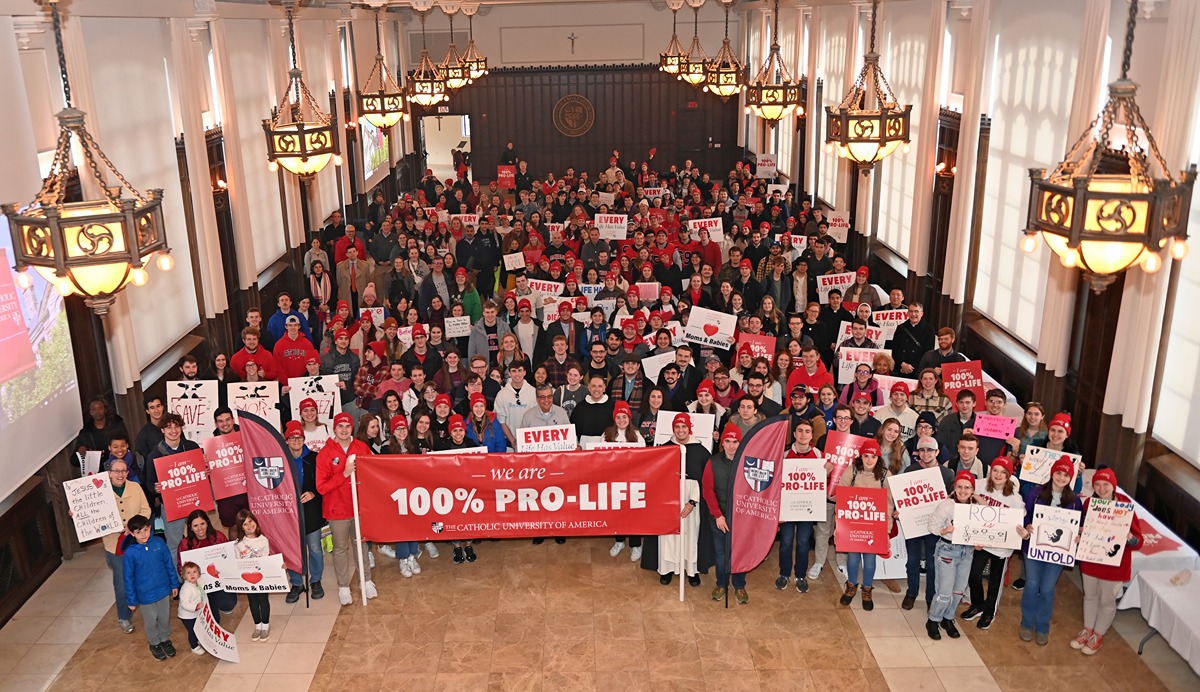 Hundreds of students, faculty and staff in bright red beanies flooded the National Mall on January 20 to join the nation in the annual March for Life.

Prior to the March, University members assembled in Heritage Hall where President Dr. Peter Kilpatrick encouraged them in their fight for life.

“The Pro-Life movement has been growing in strength for many, many years and it is because of people like you,” President Kilpatrick told those gathered.

“The March is great, it’s a way for us to derive strength from each other, it’s a way for us to be encouraged by one another,” Kilpatrick said. “The Pro-Life cause will not be won until hearts and minds are changed all over the world. That will only happen when we befriend people, when we love others, when we walk humbly with mothers experiencing unwanted pregnancy, like our Guadalupe Project.”

Father Aquinas Guilbeau, Director of Campus Ministry, led the group in prayer, asking God to look after the vulnerable at all stages of life and the courage to bear witness to a civilization of “truth and love.”

As students flooded the Brookland Metro station to head downtown, they waved signs broadcasting that Catholic University is “100% Pro-Life.” This year, the March took a new route past the Capital before ending at the Supreme Court.

Senior Sophia Cook, president of Cardinals for Life, said, “It's very special that so many people from CUA are out here today giving witness to the dignity of human life. I think a lot of people are excited with the direction the country is moving in, with the overturning of Roe vs. Wade but we also recognize that there is a long road ahead of us.”

Katherine-Elizabeth Ma, a first-year student, said the March is important for her because as someone saved by adoption, she realizes the value of choosing life. Ma said it was encouraging to see President Kilpatrick there, “leading by example, setting a standard for us.”

All University classes from 11:15 a.m. to 3 p.m. were canceled to encourage students to participate in the March. Many faculty and staff members also participated, encouraged by President Kilpatrick, who earlier in the week invited the entire University to join him.

Senior Caitlin Fitzgerald said it’s meaningful to see Catholic University strongly represented at the March. “It shows we’re a true Catholic school standing up for life. And it’s important to show how many young people actually support this and that this isn’t some fringe movement; it’s a real movement full of young people, full of life that is ready to face the world.”

First-year student Gabriel Aliaga said he marched this year to help the United States become more supportive of life. “We already overturned Roe and people think the fight is done, but it’s only beginning,” he said.

Father Aquinas said he was thrilled by the enthusiasm and energy surrounding the March on campus.

“The goal of the Pro-Life movement is not just to change laws but ultimately to change hearts,” he said. “We want to promote and help build a society and civilization in which abortion is not just illegal, but unthinkable.”

The March for Life was preceded by the National Prayer Vigil for Life, co-sponsored by Campus Ministry, in the Basilica of the National Shrine of the Immaculate Conception from the 5 p.m. opening Mass on Thursday until the 8 a.m. closing Mass on Friday. Members of the University community joined pilgrims from across the country to fill the Basilica, exceeding capacity at both Masses and pouring over into the aisles and side chapels.

Following the Thursday evening Mass at the Basilica and the Vigil for Life, students gathered for a rally at the Pryzbyla Center, hosted by the Cardinals for Life. Television stations WUSA 9 and ABC 7 News both aired stories on the rally, interviewing students about their passion for the protection of life.