Catholic-Orthodox Communion: The Goal of Francis and Bartholomew

Monsignor Paul McPartlan, Carl J. Peter Professor of Systematic Theology and Ecumenism, was interviewed by John Burger with aleteia.org on the pope's trip to the Holy Land. See the article below.

... The May 25, 2014, meeting-the original reason for the papal pilgrimage-saw the two religious leaders sign a common declaration in which they said they were taking a "new and necessary step on the journey towards the unity to which only the Holy Spirit can lead us, that of communion in legitimate diversity." Francis and Bartholomew entered the Church of the Holy Sepulchre and stood in front of the tomb of Christ, praying together and reading separate statements. They entered the tomb, where they knelt in prayer and reverenced the stone slab on which Christ lay, and then ascended the stone steps to the place of the crucifixion.The common declaration the two leaders signed is, in the estimation of Monsignor Paul G. McPartlan, a member of the Joint International Commission for Theological Dialogue between the Roman Catholic Church and the Orthodox Church, "a renewed commitment to undertaking that dialogue between us." That renewal comes at a time, he pointed out, "when the topic that we are considering in the ecumenical dialogue is, as we all know, one of the most difficult issues of all between Catholics and Orthodox-namely the whole question of primacy in relation to synodality, especially at the universal level in the life of the Church, and in a particular way, the role of the pope himself as the universal primate." ... 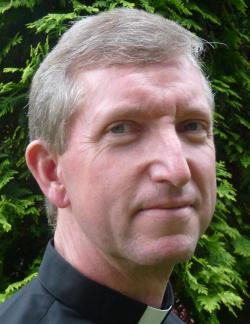 Carl J. Peter Professor of Systematic Theology and Ecumenism
END_OF_DOCUMENT_TOKEN_TO_BE_REPLACED
Back to Top