Fleeing for Her Faith 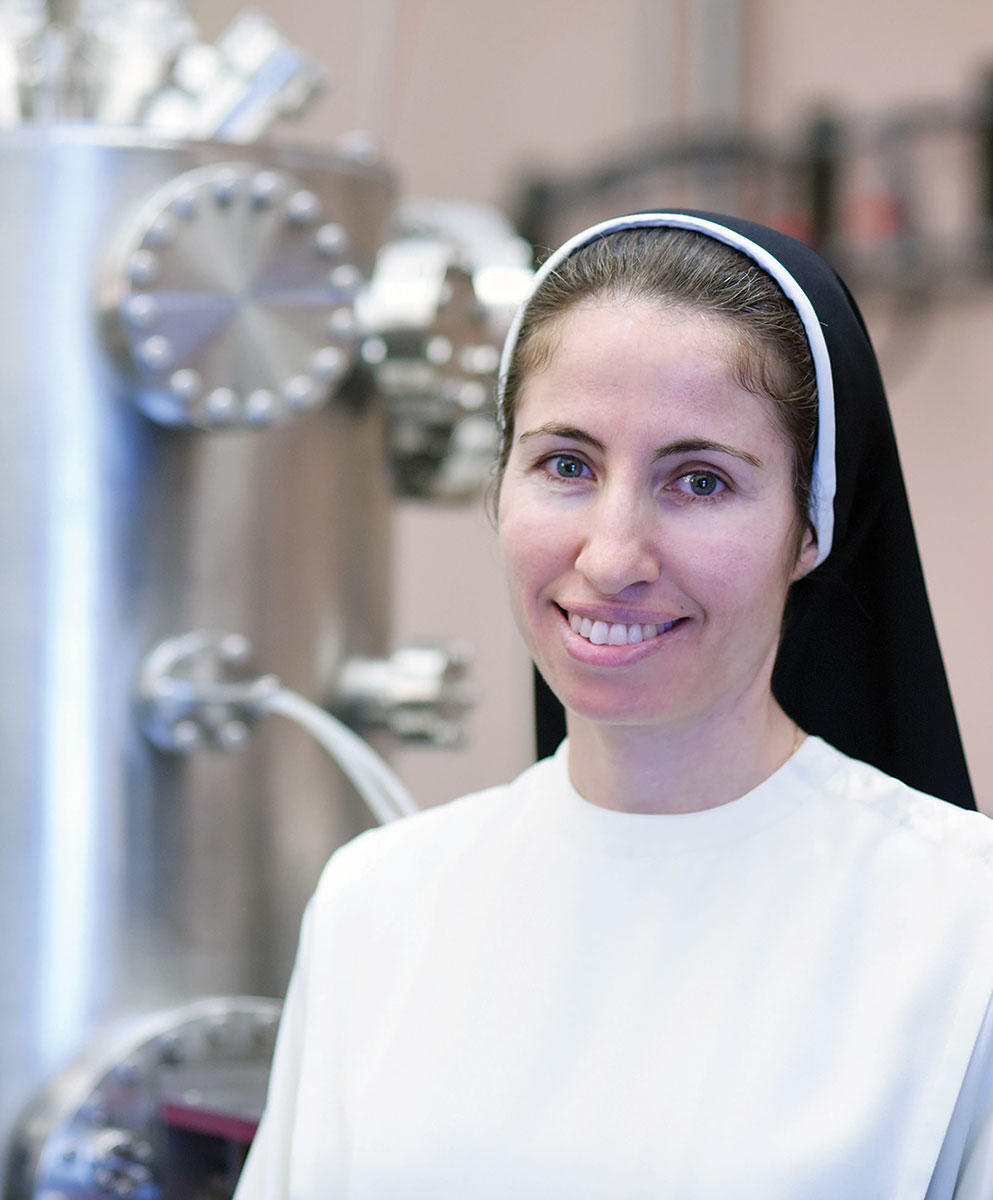 Every day, Sister Raghad Saeed walks from her home in Gibbons Hall past the Basilica of the National Shrine of the Immaculate Conception, to her office on the fourth floor of Hannan Hall, where she is researching nanoparticles in physics.

Though her life today resembles that of any doctoral student, it is the fulfillment of many years of tremendous effort and unimaginable struggles.

Born in a small town outside of Mosul, Iraq, Sister Raghad was, until a few short years ago, a refugee fleeing her homeland after it was invaded by militant fighters in the Islamic State of Iraq and Syria (ISIS). In 2014, she spent her last Sunday in Mosul before the invasion.

“We went to Mass under the heavy bombardments and there were very few Christian families,” she says. “Our hymns mixed with the sound of bombs and fears for the future.”

Coming to Catholic University gave Sister Raghad a second chance to pursue her dream. And it’s one that she isn’t taking for granted.

For as long as she can remember, Sister Raghad has been interested in studying the sciences and how the world works. Her appreciation for science connects closely with her vocation. She entered her convent for the Dominican Sisters of St. Catherine of Siena in 2001, soon after her high school graduation, the same year she began her undergraduate studies at the University of Mosul. She managed to earn both her bachelor’s and master’s degrees from the university before making her final profession of vows in 2011.

“My sisters helped me a lot,” she says. “Just to study physics was not easy, but if you love something you try to do your best.”

Sister Raghad’s love of physics — studying the building blocks of creation — relates to both a love of nature and her Catholic faith. It also provides an outlet for her to serve. Teaching in schools and universities is an important part of her order’s mission.

After earning her master’s degree, Sister Raghad accepted a job teaching at the University of Mosul. In 2014, she planned to enroll in a doctoral program in England. But her attempts to prepare for the program were abruptly interrupted on June 4 of that year, when ISIS began moving on Mosul.

“I was teaching the same day and we were informed we had to leave as soon as we could,” Sister Raghad said. “We didn’t know what was going on. We just left everything.”

The first evacuation lasted only a few days, until it was clear to return to the east side of Mosul where Sister Raghad’s convent was located. Unfortunately, that safe period was brief. Less than a week later, ISIS continued its takeover of the city.

“The shooting and shelling lasted throughout the day and night, so we thought ISIS would come into our homes,” Sister Raghad says.

As the terrorist group entered the area, Christians were given only three options: convert to Islam, pay a tribute (jizya) to stay in their homes without any rights, or be killed.

“Christians saw these choices as no choice at all,” Sister Raghad said. “We had to leave to stay in our faith.”

Leaving the city was terrifying, with gunshots firing behind them as they fled on foot. What would have been a 20-minute drive became a nearly five-hour walk.

“ISIS was on one side and on the other side was the government,” says Sister Raghad. “They were fighting and we were between them.”

The sisters fled to a nearby Christian village, only to be evacuated again two months later to a village near Erbil, Iraq. Once there, Sister Raghad contacted the education ministry to learn her academic status. She discovered that members of ISIS had taken over her university and destroyed the records. She no longer had the necessary documentation to prove her academic background.

“It was like I had lost everything,” Sister Raghad said. “That was a really hard time.”

Though disappointed that her education plans had stalled, Sister Raghad knew she wasn’t the only person in pain. Now living in a small convent in Erbil, she worked alongside her sisters to support families who had become refugees in the community.

“The Christian families, they didn’t have food or clothing,” she says, noting that people were sleeping in the streets, under trees, and in public squares. “They also lost their futures, especially the children. We all lost our history, our schools, our churches, but we still wanted to save our faith.”

A Miracle, and a New Beginning

Sister Raghad stayed in Erbil for three years before the liberation of Mosul. When she and her sisters could finally return, everything had changed. Their convent had been taken over by ISIS and nearly destroyed.

“We were really shocked when we saw Mosul,” Sister Raghad said. “We lost manuscripts that we’d had for over 2,000 years. Iraq is a very ancient area with lots of historical places. They destroyed everything.”

Miraculously, the only room in the convent that wasn’t destroyed completely was Sister Raghad’s. She was able to find documents needed to enroll in a doctoral program. Another miracle followed when Sister Donna Markham, O.P., visited Erbil as part of her work as the former prioress general of the Adrian Dominicans. Sister Donna, who is president of Catholic Charities, U.S.A., and a newly elected member of the University Board of Trustees, heard Sister Raghad’s story and reached out to Catholic University President John Garvey for help. He shared Sister Raghad’s plight with Provost Aaron Dominguez — a particle physicist and the dean of the School of Arts and Sciences at the time. He enlisted Ann Corsi, the associate dean of graduate programs and research in the School of Arts and Sciences and an associate professor of biology, to help sort out the complicated bureaucratic process of getting Sister Raghad admitted to CatholicU’s Physics graduate program.

For several months, Corsi emailed back and forth between Sister Donna and the Adrian Sisters who were sponsoring Sister Raghad in the U.S., as well as the Embassy of Iraq, the U.S. State Department, and the Dominican Sisters in Iraq to ensure that Sister Raghad could obtain the necessary paperwork to come to the United States while also maintaining her faculty position so she could return to the University of Mosul in Iraq when her doctoral work is complete. Once Sister Raghad finally came to campus, Corsi helped her settle into an apartment on campus and enroll in classes. She even had students explain the logistics of the on-campus meal plan.

“There were so many barriers in the way that it would have been easy to just give up, but her story was so compelling,” Dominguez says. “In the United States, some might complain about people who look down on the Catholic Church or give us a hard time because of our Christian faith, but that’s nothing compared to what’s going on in other parts of the world. It’s our obligation as Christians to do something concrete to help persecuted people such as Sister Raghad. As a Catholic university, we knew that we had to try.”

All the hard work paid off when Sister Raghad arrived in the U.S. in January 2018 and enrolled in Catholic University's two-semester Intensive English Language program. She began her doctoral work that fall in the nanotechnology lab of Professor John Philip.

As hard as it was to pave the way for her to come to America, it was also a mental hurdle for Sister Raghad, who had grown up with war and political conflict between Iraq and America.

“It wasn’t easy to come here, especially because I had in my memory all of those things,” she says. “Sometimes God invites us to go to places where you cannot imagine He would be. He was with us in Iraq while everything was awful.” Though it is difficult to be apart from her religious sisters and her family who are still in a dangerous position, Sister Raghad now appreciates that God is with her, still, in America. 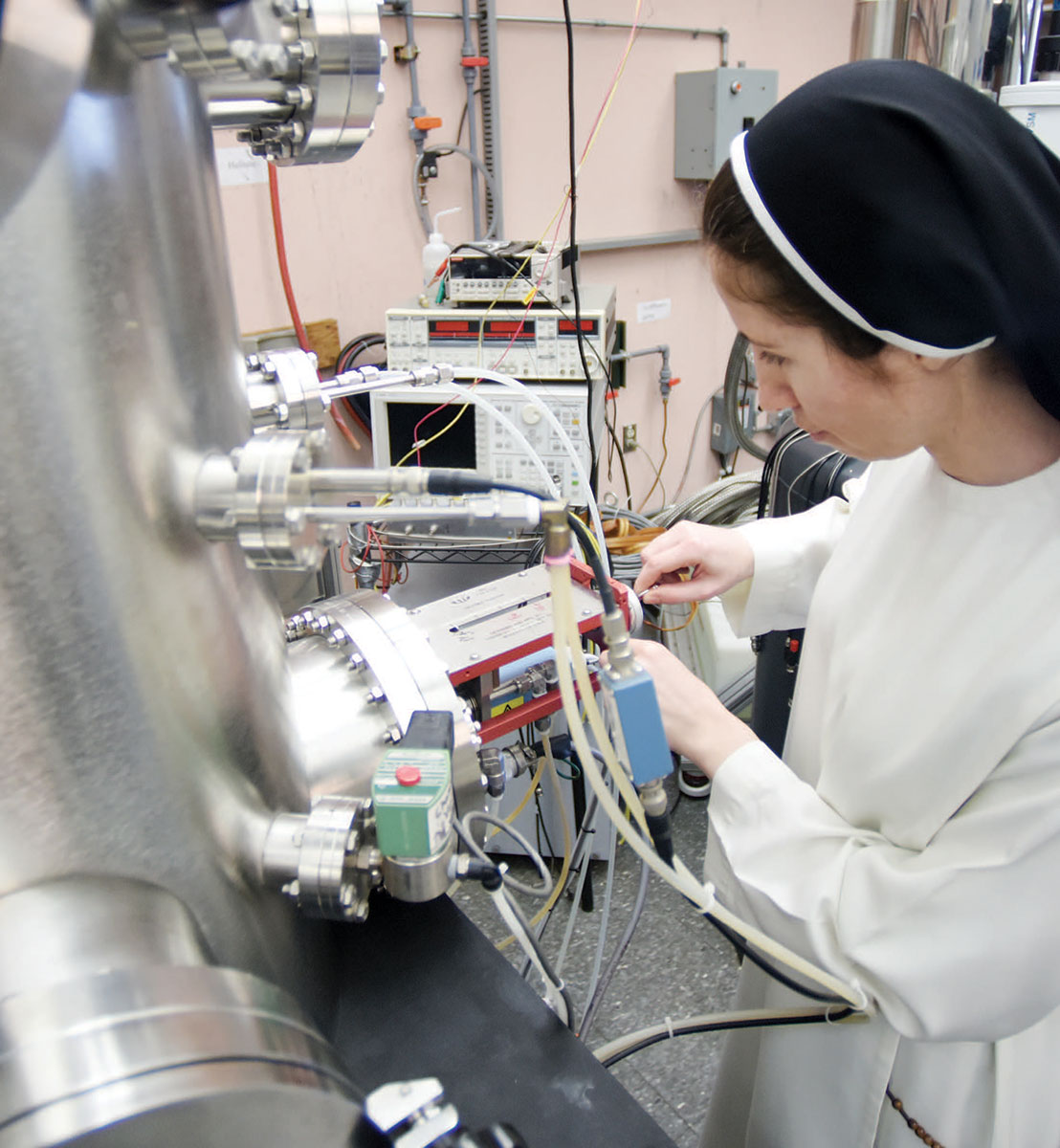 “God is working through the people who helped me to get here,” she says. “I see the kindness of people in America and what I am seeing is motivating me to be a better person. Many Americans want to help and they are really moved by what’s going on in Iraq. This makes me feel that we are all human.”

Corsi said she is most impressed by Sister Raghad’s determination and focus on her work, which is made even more difficult because she is studying in a non-native language.

“There aren’t that many women in physics, period,” Corsi said. “It’s a very difficult discipline which requires a high level of math and she’s just so determined to do this.”

Corsi also admires Sister Raghad’s passion for science. “I think that she is a role model for all students,” she says. “I tell graduate students all the time that your work has to be a passion for you because every day in graduate school is not going to be easy and you’re going to have to figure out how to plow through even when you really just want to throw in the towel. With Sister Raghad, you get the impression that nothing and nobody will stand in her way.”

More than anything, Sister Raghad said she is inspired to complete her doctoral studies so she can return home and carry on her order’s mission of educating those in need.

“This is our job, to educate people and it doesn’t matter if they are Muslim or Christian,” she says. “I don’t know the future, and it may be a danger to teach again in Mosul. But that is my mission as a sister there. It’s not easy but I know my goal and and whatever I need to do, I will do it.”