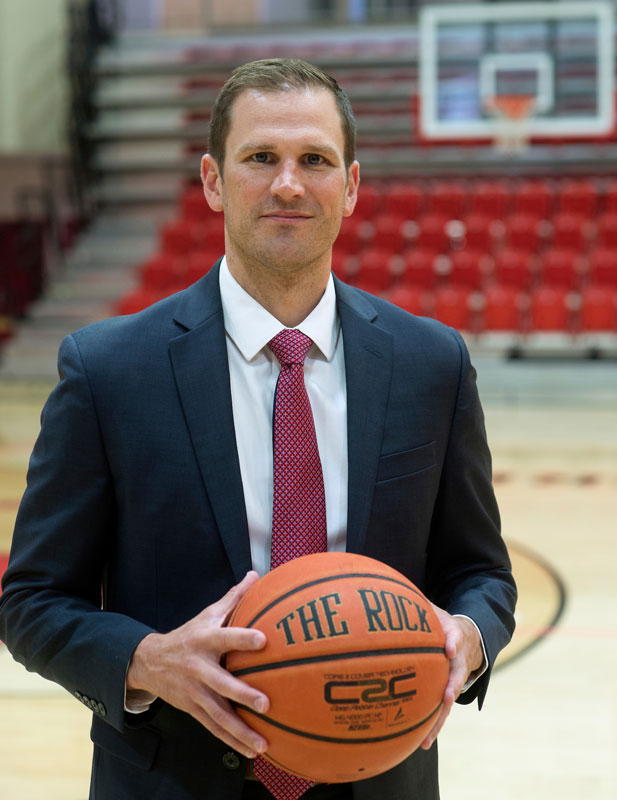 More than a decade ago, he took the ball down court for the Cardinals. Now, Aaron Kelly, B.A. 2006, is the new head coach for men’s basketball. Since graduating, Kelly has accrued 13 years of assistant coaching experience, including Division I programs at Bucknell University and George Mason University. Here he talks about his coaching philosophy and how his time as a student-athlete has prepared him to lead.

What brought you to Catholic University as a student?
I’ve been playing basketball for as long as I can remember, since I was probably 4 or 5. When I was in high school in Syracuse, my best friend told me I should look at Catholic because the team had just won a Division III national championship. I fell in love with the University’s location, the size, and the athletics. I had that gut feeling that I wanted to be here.

What do you remember most about your time on the Catholic University team?
The best parts about it were the guys I played with and our shared experiences. My best friends to this day are people who were involved in the basketball team, guys I really keep in touch with. I wasn’t the best player, so I don’t have memories of 20-point games, but I have great memories of just being a part of the team. That was a lot of fun for me.

How has your experience as a student-athlete helped you as a coach?
Student-athletes face a lot of adversity and they have to learn to manage their time and make sacrifices. Everyone comes in and thinks they’re going to be a good player, but I was always a total role player. The fact that I wasn’t a star here helped me shape who I am as a professional. I know what it’s like to be the best player on the team, but I also know what it’s like not to play a ton. Having all those experiences was good because I’m able to empathize with each player. For me, being on the basketball team was the most important class I took in college. It prepared me the most for my profession.

What is your coaching philosophy?
You have to build a culture and establish the way the team is going to behave — being punctual, respectful, communicating, treating people well, and instilling good habits. Then it’s all about empowering your guys to perform well, finding ways to hold them accountable while also instilling confidence so they perform to their potential.

We will be very focused on a process-based approach to this season. The guys talk about wanting to win championships or a tournament and I am trying to shift their focus to, ‘What do we need to do to have a good day today?’ I want them to focus on getting better and trying to maximize their potential, and then we will see where that journey takes us.