University Celebrates Ties to Mother Teresa in Advance of Canonization

Blessed Teresa of Calcutta — known to most of the world simply as Mother Teresa — will be canonized a saint by Pope Francis on Sept. 4. This Fall, Catholic University is celebrating its many ties to the humble nun. 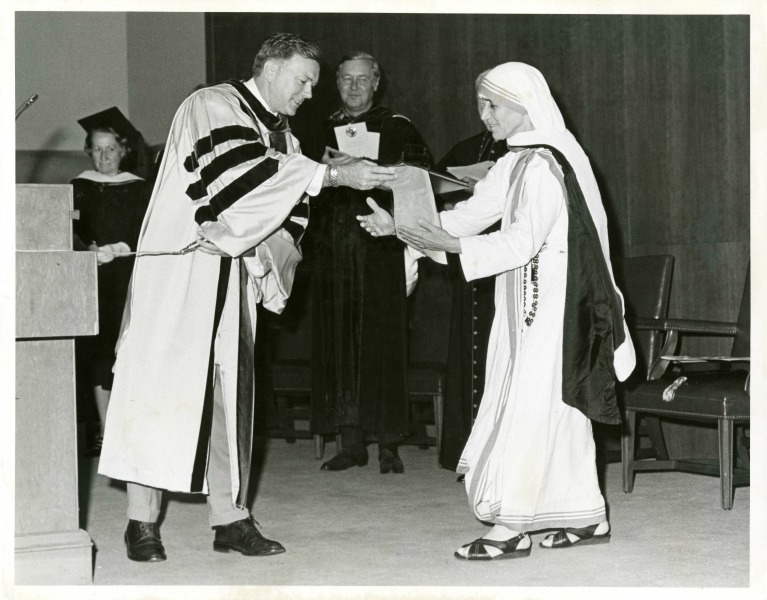 Eight years before she would receive the Nobel Peace Prize, The Catholic University of America was the first university to award an honorary degree to a nun working with the poor and sick in India Teresa of Calcutta, now known to the world as Mother Teresa, visited Catholic University in October 1971 to receive an honorary doctorate. A photo and citation related to this visit and honorary degree are among thousands of the University’s records related to her.

In 2012, Cardinal Sean O’Malley, alumnus, archbishop of Boston, and chairman of the University’s Board of Trustees,blogged about the day Mother Teresa was awarded her honorary degree.

“We had received notice that the University was awarding an honorary doctorate to a missionary nun in the Caldwell Auditorium. Realizing that few people would bother to attend, I decided ‘to make the sacrifice’ in solidarity with a fellow religious. Only a handful of people showed up. … None of us had ever heard of Mother Teresa of Calcutta.”

The University stated it was recognizing a woman “for whom love is not a slogan but a way of life.”

Among its holding are more than 60 boxes of archived material related to Mother Teresa of Calcutta. In the collection are records from the Coworkers of Mother Teresa (lay people and non-Catholics who support her work), and the personal correspondence, research, and records of Eileen Egan — biographer and friend of Mother Teresa who came to know her through her own work with Catholic Relief Services in India.

In the Egan collection are countless letters and mementos from Mother Teresa and numerous photographs. Additionally, the archives contain a Marvel comic book about the diminutive nun, and souvenir coins bearing her image.

>Read more about the collection on the University Archives blog.

University President Reflects on Her Witness

In the latest of a regular series of columns for Catholic News Service,University President John Garvey reflected on the impact of this modern-day saint, and the significance of the faster canonization process.

“Mother Teresa was real, and recent. She came to our campus, and we gave her an honorary degree. I met her novice mistress at the basilica. My father used to send Mother Teresa money and got a thank-you note from her. … When I read her own account of Jesus speaking to her in 1946 on a train to Darjeeling, and saying “come be my light” to the poor, I feel a conviction about God’s acting in the world that is as certain as faith can be.

“The Second Vatican Council’s Dogmatic Constitution on the Church (“Lumen Gentium<”) proclaims that we are all called to be saints. The wonderful thing about our newest saint is that she shows that this means us, and that it is possible.”

On Sunday, Sept. 18, The Catholic University of America will dedicate its annual fall day of service to Mother Teresa. Students, faculty, alumni, staff, and their families are invited to serve the local community in honor of the Church’s newest saint. Groups will work with local monasteries, convents, schools, and soup kitchens. 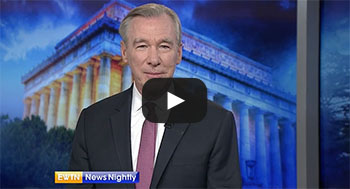