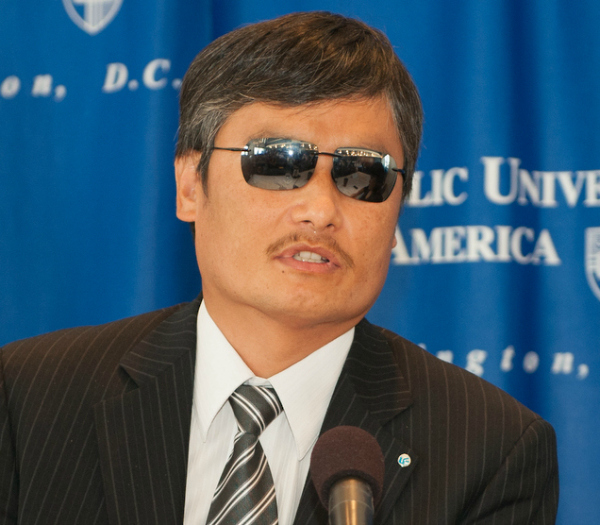 Chinese activist Chen Guangcheng gave a stirring account of human rights violations in China during a brown bag lunch discussion hosted by the Institute for Policy Research & Catholic Studies (IPR) at The Catholic University of America on Feb. 15. Guangcheng has been an IPR visiting fellow since 2013.

After growing up blind in China, Guangcheng built a reputation for himself as a self-trained “barefoot lawyer” who advocated against the brutal tactics used by the Chinese government to enforce the state’s one-child policy. After surveying residents of the Shandong province where he lived, Guangcheng learned that there were 130,000 residents who reported being abducted, intimidated, or beaten for violations of the policy.

As a result of his investigation, Guangcheng was imprisoned by the Chinese government for four years and placed under illegal house arrest with his family for another seven years. During that time, he and his wife suffered beatings and torture until they eventually escaped on foot to the American embassy in Beijing.

“To outsiders, it seems the living standards have improved,” he said. “The reality is much harsher.”

One current issue, Guangcheng said, is the increased numbers of crackdowns against human rights lawyers, who are often abducted, beaten, and detained without access to legal counsel. The families of these lawyers are also faced with intimidation. In some cases, their children have been blocked from attending school.

“If you look at the system being applied in these crackdowns, there is no rule of law,” Guangcheng said.

Guangcheng said the United States can help protect Chinese human rights by attempting to engage directly with Chinese citizens rather than the regime itself. He also called on Americans to support nongovernmental organizations and their activities in China and to speak out more strongly against the so-called “Great Firewall,” which blocks access to certain Internet sites throughout the country.

Even though some information is blocked to Chinese populations, Guangcheng believes more and more citizens are using alternate means of acquiring information about the activities of the regime. Eventually, he thinks change will happen due to a rising tide of internal pressure against the government’s violations.

“The Communist government can control the information flow, but that will only slow down the awakening process,” he said. “Day by day, more and more people are learning what’s happening inside China and I predict big changes within one to two years.”

Guangcheng’s talk was part of an ongoing “brown bag” discussion series hosted by IPR. For more information on the institute or its upcoming events, visit ipr.cua.edu.