Sinise, who is well known for his film roles in Forrest Gump and Apollo 13, was chosen for this honor because of his decades of work with America’s service members. In 2011, he established the Gary Sinise Foundation to serve and honor military members, first responders, and their families. He is also the father of a Catholic University alumna, Ella Sinise, who earned her bachelor’s in elementary education in 2015.

After receiving his award at a dinner hosted on April 8, Sinise spoke about Cardinal Gibbons and how honored he was to receive a medal in his name. Established in 1947, the Cardinal Gibbons Medal honors any person who “has rendered distinguished and meritorious service to the Roman Catholic Church, the United States of America, or The Catholic University of America.”

“Truly this man made a tremendous impact on so many,” he said. “It is quite something for me to be invited to receive an award in his name for a mission to make a positive impact on our country’s deserving veterans.”

Sinise said he first became passionate about supporting veterans after meeting his wife, Moira, and her siblings, several of whom were Vietnam veterans. Nearly a decade later, he used their experiences as inspiration when he played Forrest Gump’s Lt. Dan Taylor, a disabled veteran suffering from Post-Traumatic Stress Disorder. Playing that role also led Sinise to become involved with the Disabled American Veterans organization.

After the attacks of Sept. 11, 2001, Sinise said he felt more inspired than ever to serve military members and their families. He began performing for current military members and veterans with his band, Gary Sinise and the Lt. Dan Band. And in 2008, he started his own foundation, which provides resources and support for members of the military and armed forces.

“My faith continued to grow and I felt called by God to 'show up,'" Sinise said. “Service to others is a great healer, and I was compelled to use all the tools and notoriety that I had been blessed with, and all the work I had done with the military over the years, to serve in a more substantial way.”

The night before the awards dinner, Sinise addressed students from the University’s Department of Drama and the Benjamin T. Rome School of Music in Callan Theatre. During a question-and-answer session, he shared stories about his early days as an actor, when he founded the nationally acclaimed Steppenwolf Theatre in Chicago with friends. At the time, he was only 18 years old.

“At that age, you don’t know what you don’t know,” he said. “We were just some kids who wanted to do plays, we didn’t know any better.”

Though Sinise said he doesn’t have a formula for success in the acting world, he stressed the importance of persistence and learning from experience.

“Persistence is the key ingredient to success,” he said. “You have to have talent too, but theatre is so hard … 99 percent of it is rejection, with 100 people going out for one part. You have to have a pretty thick skin and a real love for what you’re doing.”

Sinise also told the students about his work with veterans, and how his time with them reflects his faith and impacts his work as an actor.

“Service is a big, big part of my life,” he said. “I have been blessed with a successful career, made some money in that career, and have been able to channel that stuff into positive things. If you can help somebody else, it can only give you something. And that’s got to manifest itself into your acting.” 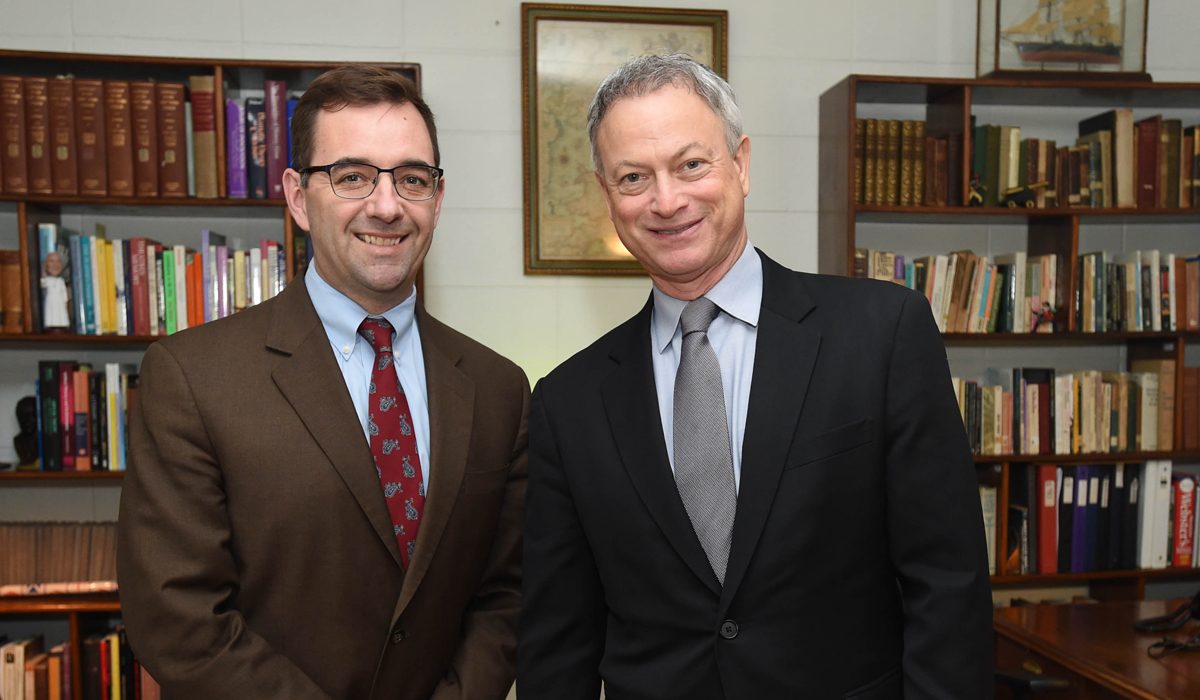 Patrick Tuite, chair of the Catholic University Department of Drama, invited Sinise to meet with students while he was on campus to receive the Gibbons Medal. 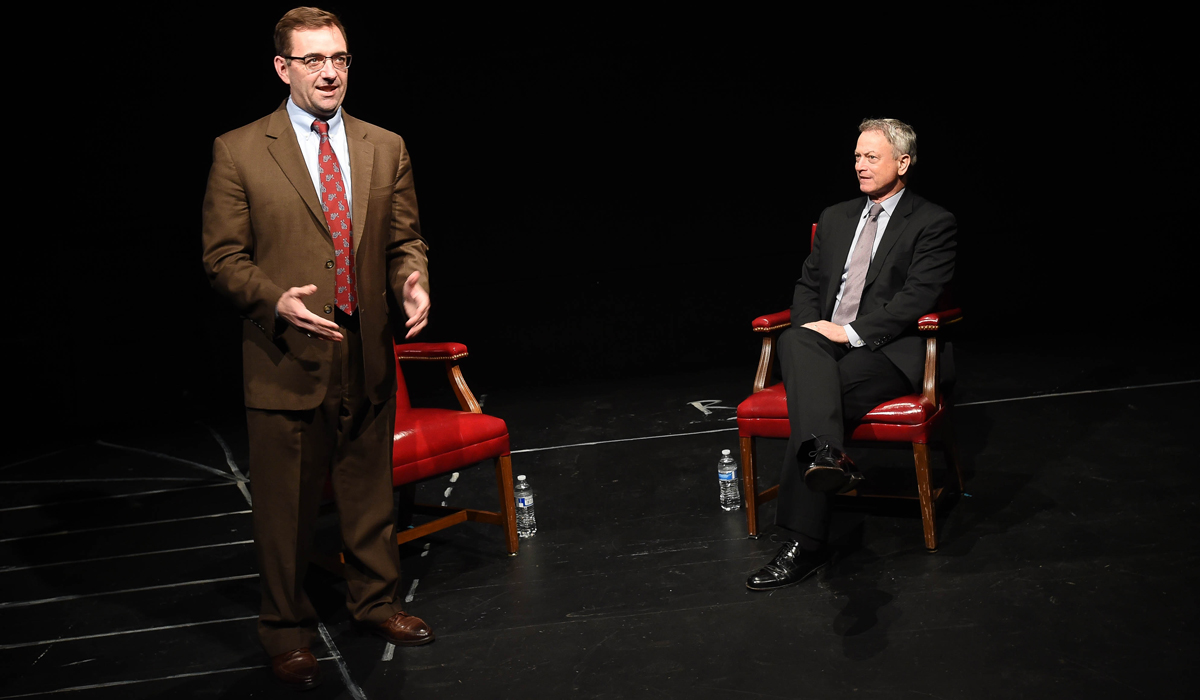 Tuite introduced Sinise to the students gathered for the question-answer event. 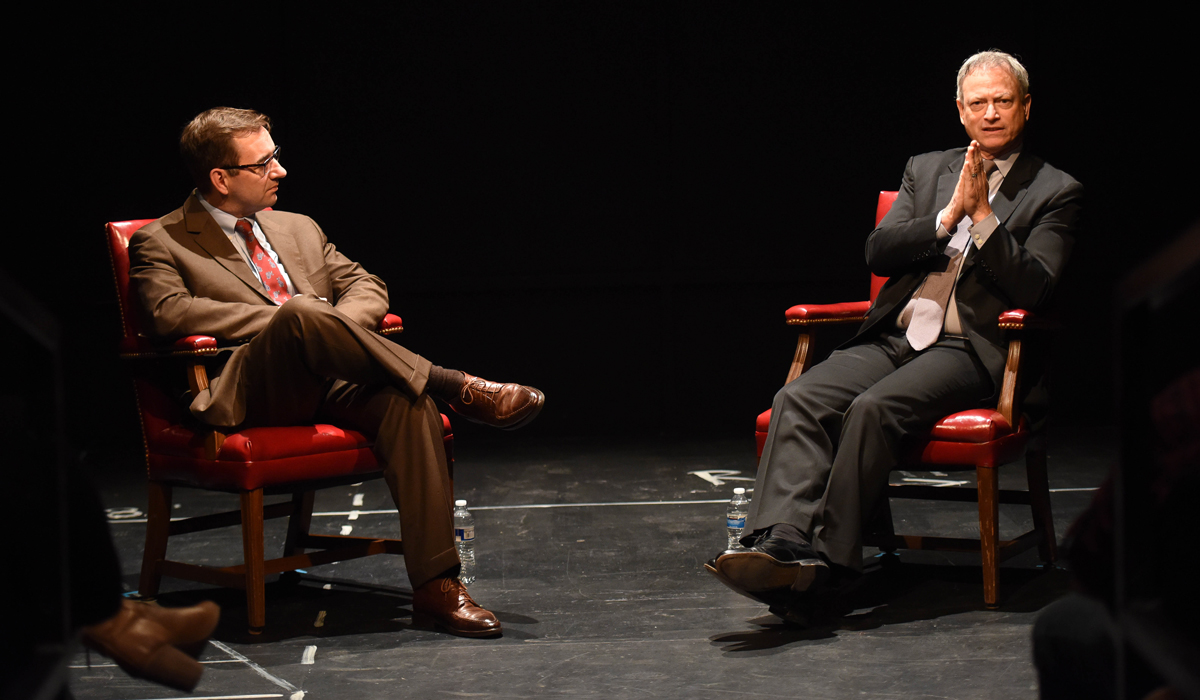 Sinise addressed students from the stage of the drama department’s Callan Theatre. 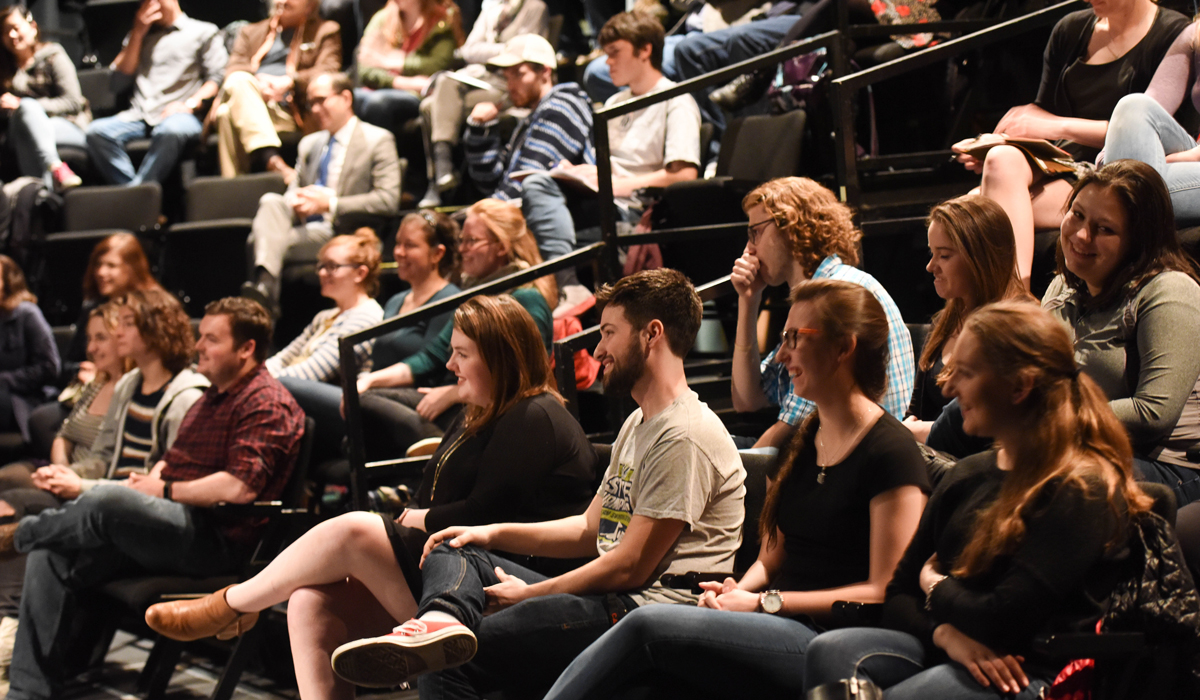 Students from the Department of Drama and the Benjamin T. Rome School of Music participated in the question-and-answer session. 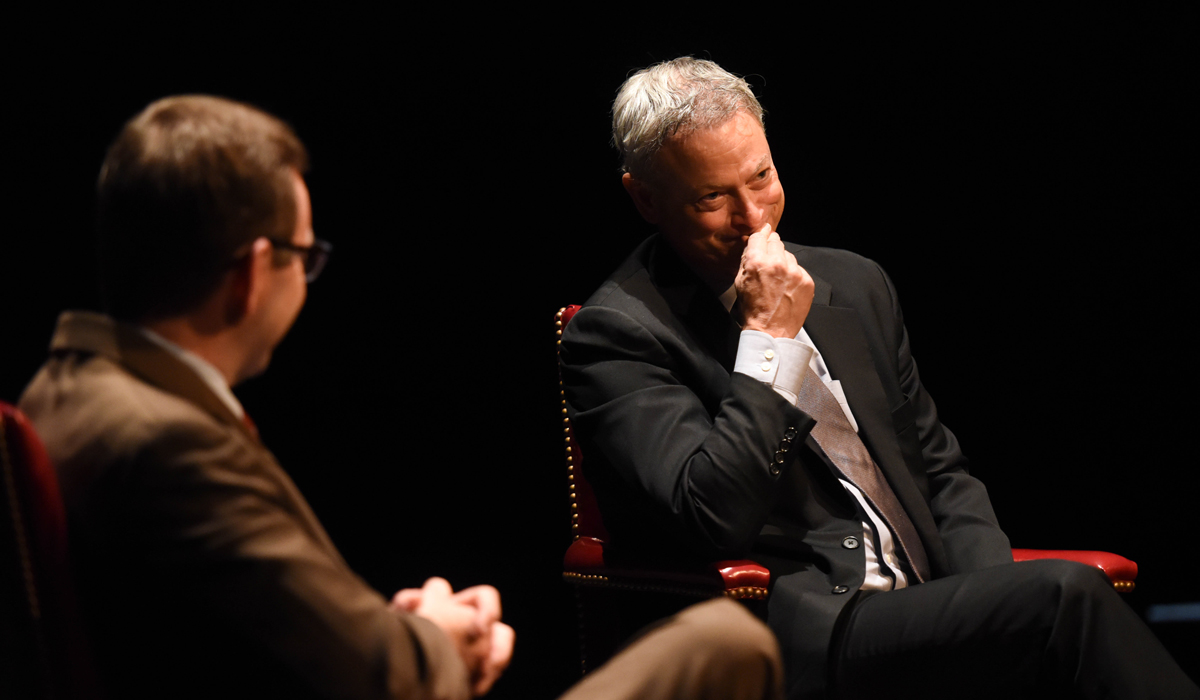 Sinise answered questions and related to the students as he recalled his early days as an aspiring actor. 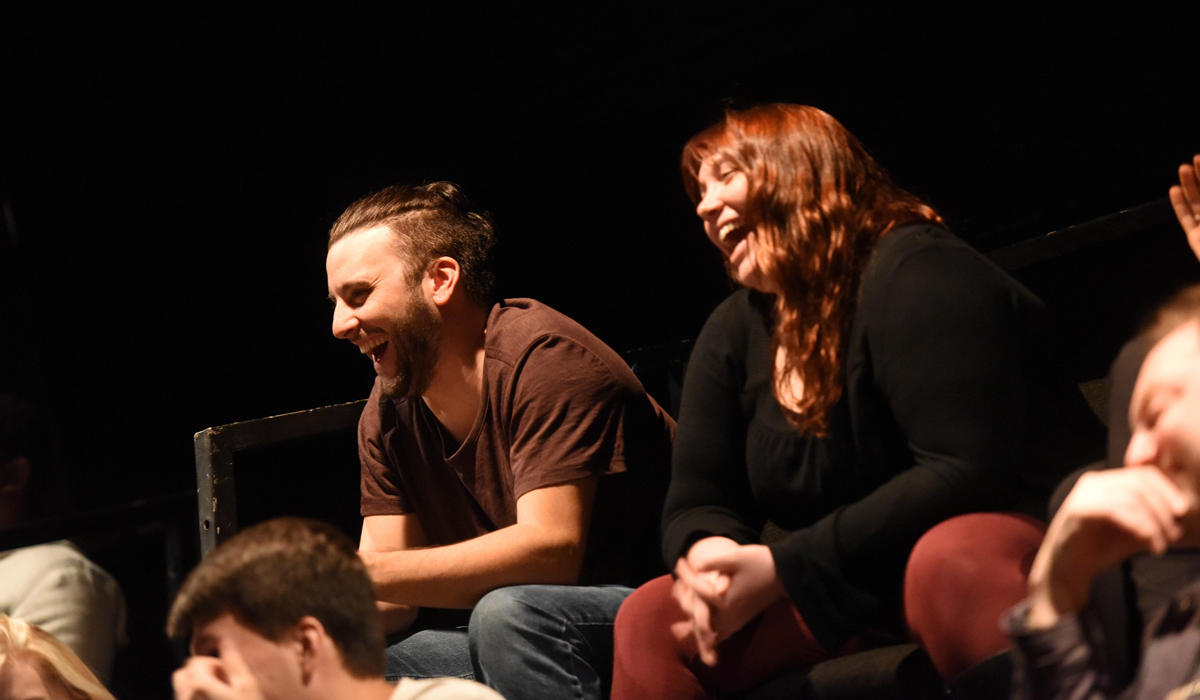 Recounting how he co-founded a theatre company in Chicago, he said, “At that age, you don’t know what you don’t know. We were just some kids who wanted to do plays, we didn’t know any better.” 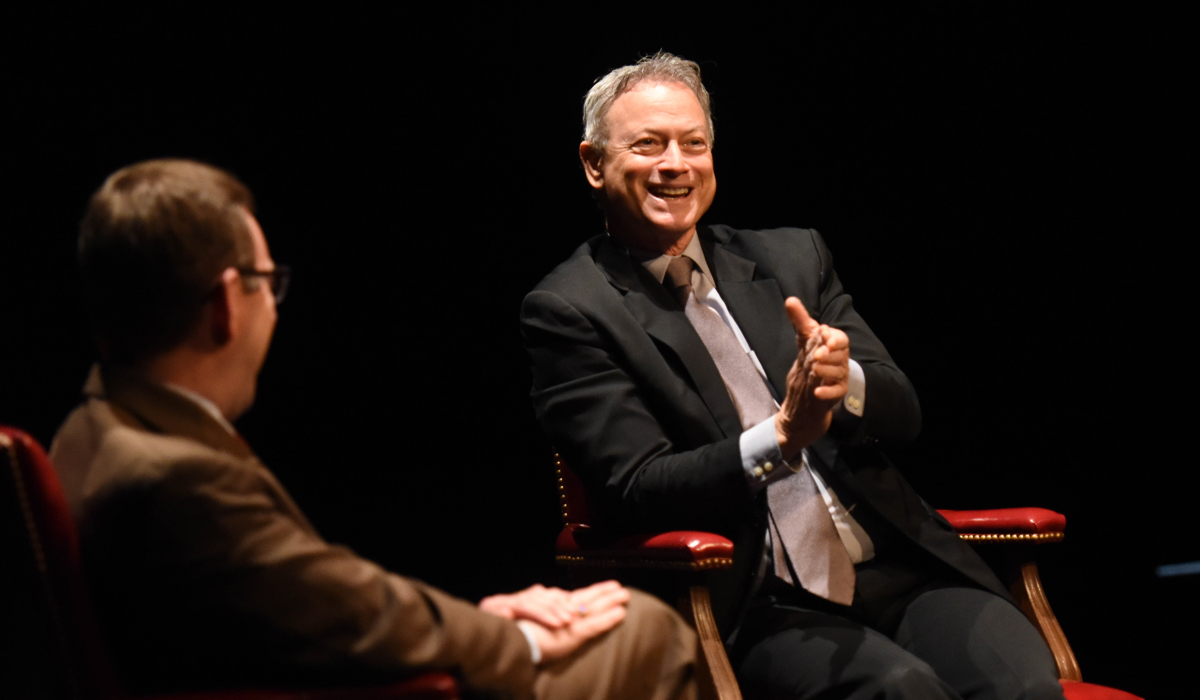 Asked to offer advice for young actors, he said, “Persistence is the key ingredient to success.” 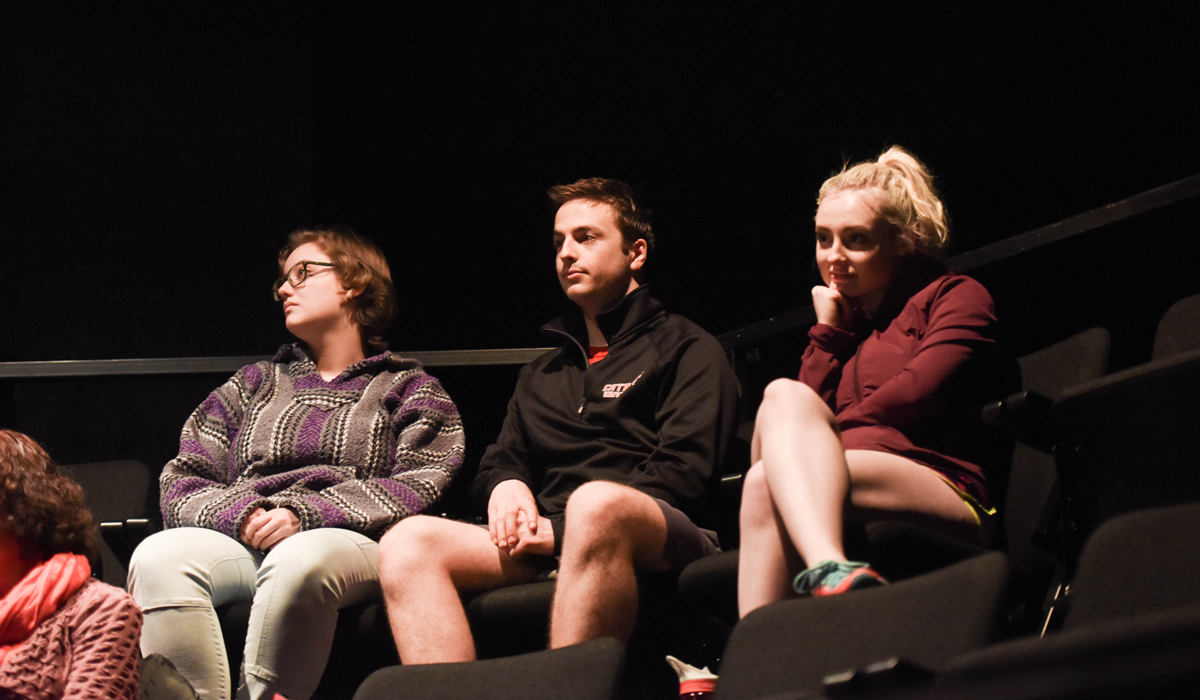 Students also asked about his work with veterans. 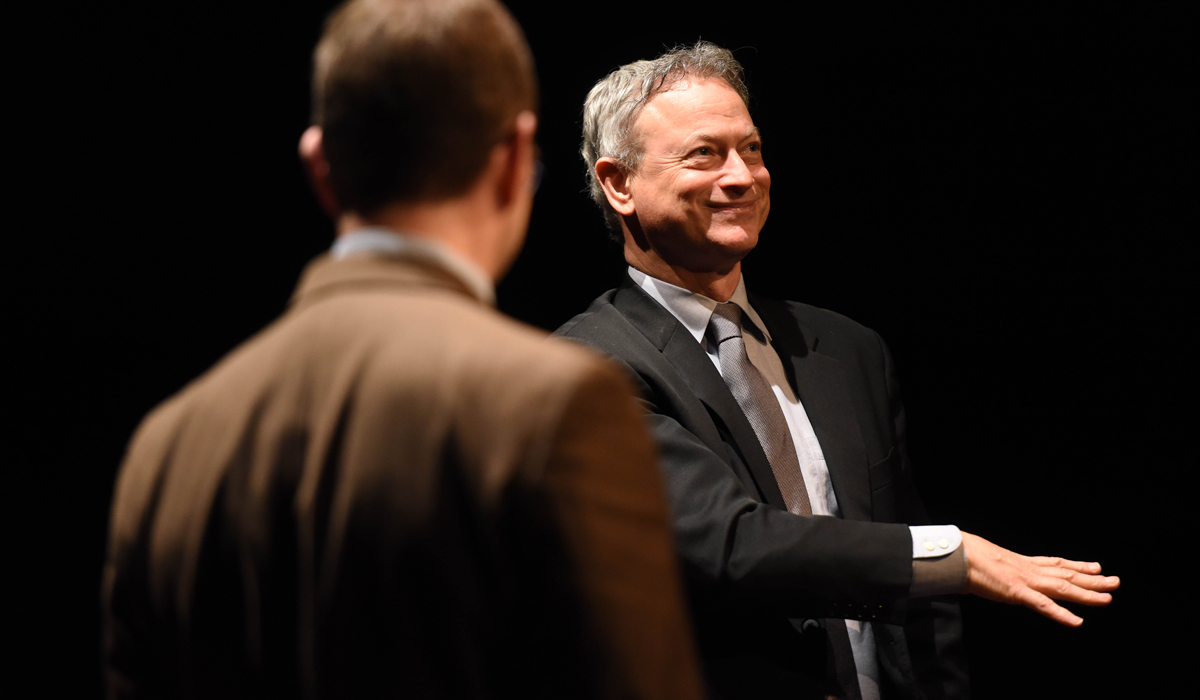 “Service is a big, big part of my life,” Sinise said. “If you can help somebody else, it can only give you something. And that’s got to manifest itself into your acting.”