Peggy Noonan, Pulitzer Prize-winning Wall Street Journal columnist, author, and former special assistant and speechwriter to President Ronald Reagan, will address the Class of 2017 at The Catholic University of America Commencement Ceremony on Saturday, May 13, 2017.

Noonan, whose column, Declarations, has run weekly in The Wall Street Journal since 2000, is the author of nine books on American politics, history, and culture. She has written bestselling biographies of  Pope John Paul II and Ronald Reagan.

Noonan worked with President Reagan on many speeches, including his address to the nation after the Challenger explosion, which is ranked as one of the best American political speeches of the 20th century. Before entering the Reagan White House, Noonan was a producer and writer at CBS News in New York and an adjunct professor of journalism at New York University. In 2010 she received the Medal of Media Excellence of the Medal of Honor Society, whose members are the living recipients of the Congressional Medal of Honor.

Catholic University’s 128th Annual Commencement Ceremony will take place on Saturday, May 13, starting at 10 a.m. The exercises will be held outdoors on the east steps of the Basilica, located at 400 Michigan Ave., N.E.  The Columbus School of Law Commencement, also held at the Basilica, is scheduled to begin at 11 a.m. on May 26.

To view the livestream of the Commencement ceremony, click here.

MEDIA: To attend commencement, members of the media are required to inform the Office of Marketing and Communications by 3 p.m. on Friday, May 12, at communications@cua.edu or 202-319-5600. 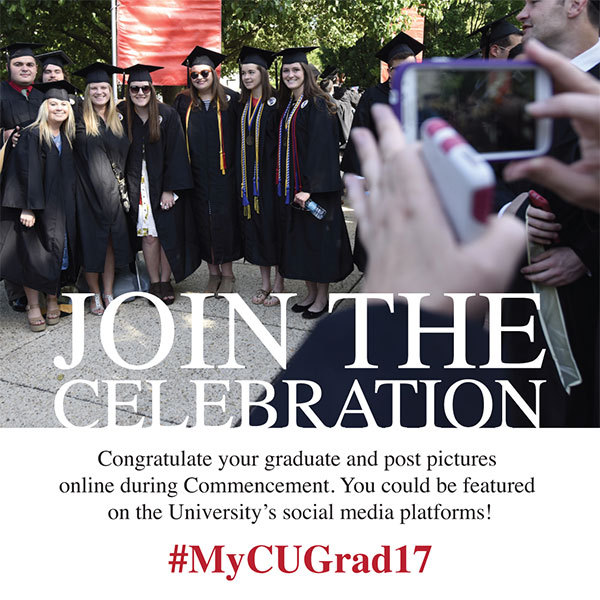 Be sure to use #MyCUGrad17 on social media to join the coversation during Commencement. You might even be featured on one of the University's accounts.

Be sure to use #MyCUGrad17 on social media to join the coversation during Commencement. You might even be featured on one of the University's accounts.