University Provost Andrew Abela signed a new agreement Sept. 12 to continue a long-standing commercial partnership between the University’s Vitreous State Laboratory (VSL) and the Atkins company, one of the world’s most respected design, engineering, and project management consultancies. The new agreement has a projected value to Catholic University that could amount to as much as $80 million over its 10-year term, based on past performance.

VSL, which is housed within Hannan Hall, is a research and development facility focused on the study of glass and its many uses. Since the late 1970s, much of VSL’s work has centered on nuclear waste management through a process called vitrification, in which radioactive waste is transformed into glass using a 2,000-degree Fahrenheit melter. The resulting glass remains radioactive, but the waste no longer leaches into the surrounding environment.

The laboratory partners with Atkins on many nuclear waste treatment proposals and projects for the U.S. Department of Energy and their contractors, as well as countries like the United Kingdom and Japan. Together, VSL and Atkins support the nuclear waste vitrification plant that is currently operating at the Savannah River Site in South Carolina, as well as a plant that is under construction at the Hanford Site in Washington state, on a former site of the Manhattan Project.

Not limited to the study of glass and vitrification processes, the partnership also collaborates on research including projects related to cements, geopolymers, and water decontamination materials.

VSL’s relationship with Atkins began many years ago when the company Duratek was founded in 1978 based on technology developed at VSL. Duratek was eventually purchased by a company called EnergySolutions in 2006, and later, Atkins, in 2016. This summer, Atkins was acquired in its entirety by SNC Lavalin, a Canadian engineering and construction group with 53,000 employees and offices in more than 50 countries; the company had 2016 revenues of $12.2 billion Canadian.

“Atkins’ enduring partnership with the Vitreous State Laboratory at The Catholic University of America is one of the longest in our company’s history and I’m thrilled to be here today cementing our relationship for another decade,” said Mark Morant, president of Atkins’ nuclear division in the Americas and Asia Pacific Region.

Ian Pegg, VSL director and professor of physics, negotiated the terms of the new agreement. He said it was “a pleasure to be extending our mutually beneficial partnership” for another 10 years. “This is surely one of the most successful university-commercial partnerships in the industry and it’s wonderful to see it continue. We look forward to working together over the next decade on a wide range of projects, many of which deal with some of the most pressing environmental challenges.”

Abela said the continued partnership was a testament to the years of successful collaboration between VSL and Atkins.

“This partnership is one valuable way that Catholic University scientists can contribute to the protection of the environment in the United States and the world, through continuous research and innovation,” Abela said. “I’m looking forward to seeing what a new decade of collaboration will bring.” 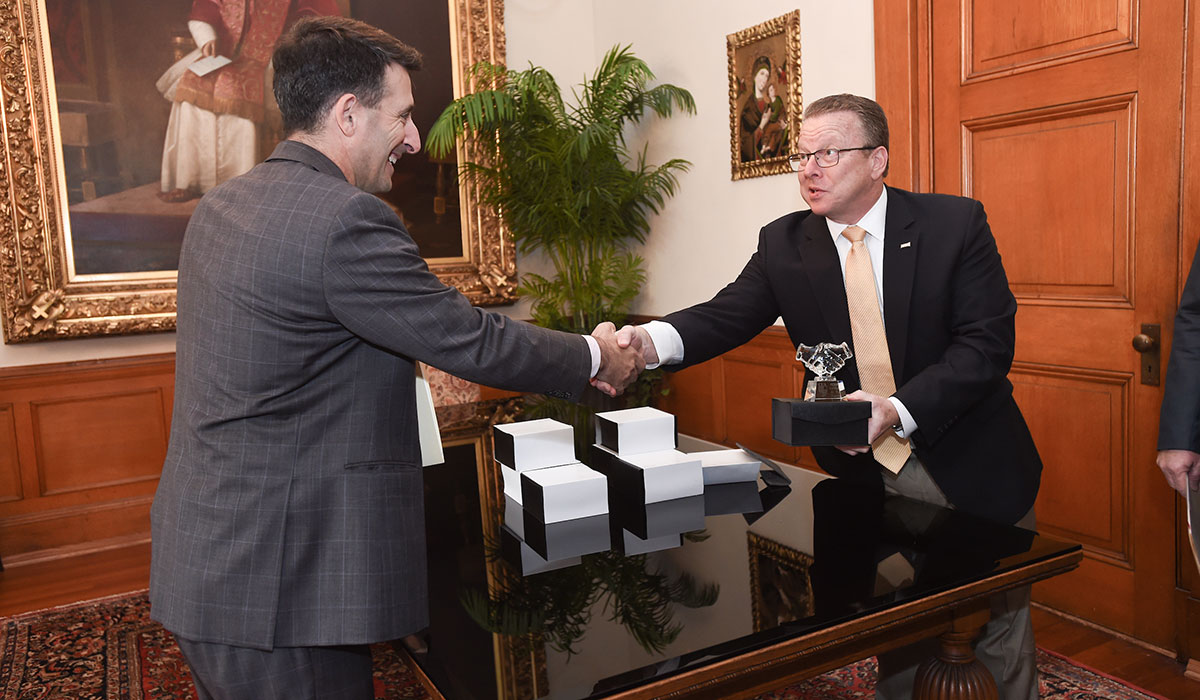