Rep. Francis Rooney Joins Professors for a Conversation on Subsidiarity

What is subsidiarity and why does it matter in the world today? That was the topic up for discussion during a recent symposium hosted by the Institute for Human Ecology at The Catholic University of America.

The symposium, “Subsidiarity in Politics, Culture, and Economy,” took place on Oct. 23 and included a round-table discussion with U.S. Rep. Francis Rooney of Florida, as well as Catholic University professors Joseph Capizzi, executive director of the Institute for Human Ecology; David Cloutier, associate professor of moral theology and ethics; Bradley Lewis, associate professor of philosophy; and Andreas Widmer, director of the Ciocca Center for Principled Entrepreneurship. 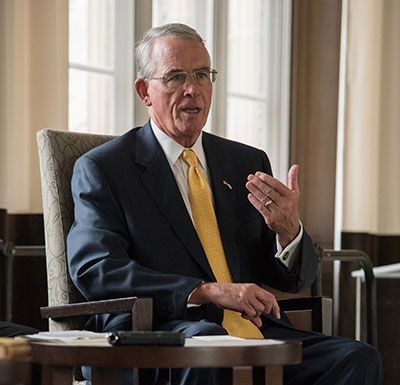 Rooney, who served as the ambassador to the Holy See from 2005 to 2008, began the discussion with his definition of subsidiarity in the context of government and civil life as “the preservation of power to the people” and “devolving the solution back to the closest unit at which it can be solved.”

In the United States, Rooney said, subsidiarity often supports the concept of states’ rights, which advocates for most major decisions and policies to be decided at the state level.

Lewis spoke about the theological background of subsidiarity, which dates back to Pope Pius XI’s encyclical Quadragesimo Anno, drawing inspiration from writings by Aristotle and St. Thomas Aquinas.

Sometimes subsidiarity is seen as an opposite of solidarity, said Cloutier. In reality, he believes, the two principles should be used in cooperation.

“Subsidiarity is the means to real solidarity,” he said. “Solidary can’t come about from the top down, instead it has to come about from various associations at the ground level.”

As the conversation continued, the group debated if and how the idea of subsidiarity should be applied to current challenges facing the United States, including the insurance market, education policy, poverty relief efforts, and environmental regulations.

While determining who should be in charge of particular decisions at any given moment is difficult to ascertain, Lewis said the main purpose of subsidiarity is helping human beings flourish by allowing them to determine their own actions.

“There’s a kind of freedom exercised with general human reasoning,” he said. “Subsidiarity allows people as much as possible to make their own decisions, even if it entails a certain loss at some point.”

As Cloutier said, subsidiarity is a call for people to exercise “freedom with responsibility” rather than relying on those above them to take control.