Standing before a room of about 100 students on Nov. 8, Catholic University alumnus Martin O’Malley provided insights into what he sees to be the future of the Democratic party.

O’Malley, who graduated from Catholic University in 1985 with a degree in political science, served as the mayor of Baltimore from 1999 to 2007 and the 61st governor of Maryland from 2007 to 2015. In 2016, O’Malley ran as a democratic candidate for the presidency, debating alongside Senators Hillary Clinton and Bernie Sanders. 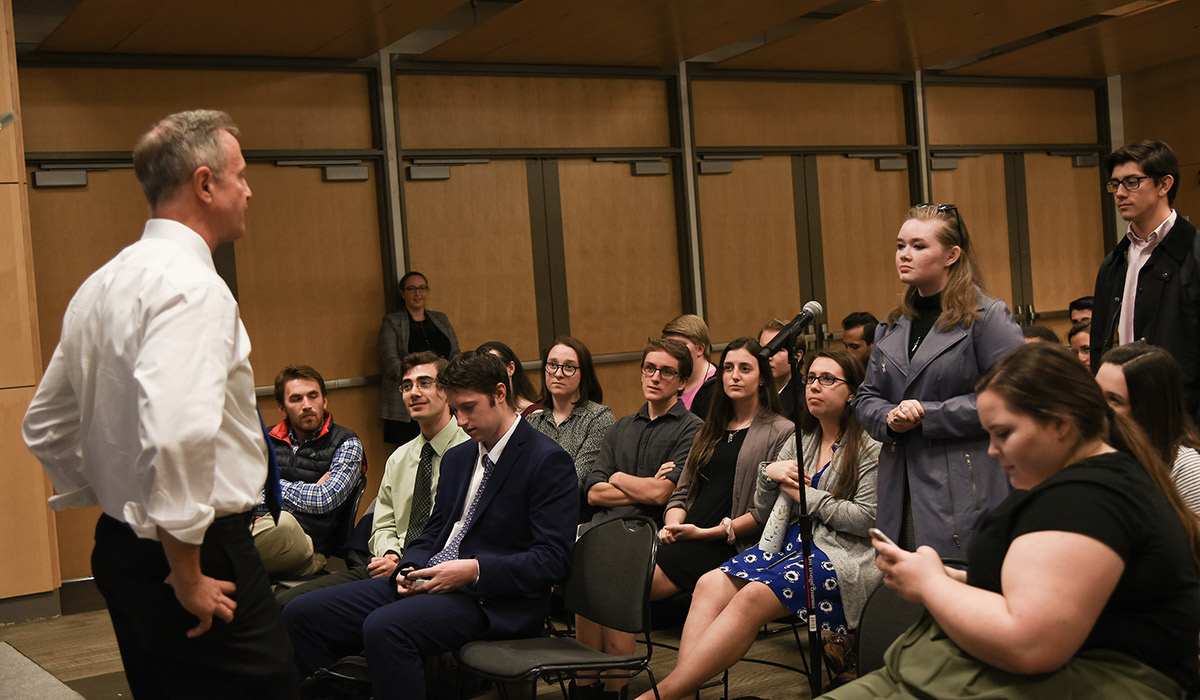 O’Malley was invited to campus by the College Democrats student organization, but the event was open to all students. Speaking to them in the Great Room of the Edward J. Pryzbyla University Center, O’Malley alluded to the country’s current divisive political system.

“You and I are part of a living, self-creating mystery called the United States of America, but the promise at the heart of that mystery is actually a very real and concrete thing. It is this: If you work hard, if you play by the rules, you should be able to get ahead,” O’Malley said. “Right now the promise of that mystery is very frayed. Confidence in our national government has never been lower.”

Americans today, O’Malley continued, “are watching a constitutional crisis unfold in our own country. We’re seeing things we never thought we’d see, and hearing words uttered from the president of the United States we thought we’d never hear.”

Still, “it is our correct response, the greatest of freedoms and privilege to embrace the moment, and to realize that darkness makes a great canvas.”

Speaking two days after the midterm elections, O’Malley said he was encouraged by the high voter turnout, especially of young and first-time voters. He was also encouraged by the number of states who elected democratic representatives, some for the first time.

“The democratic party is regenerating itself, like a forest after a bad fire,” he said.

Following his talk, O’Malley answered numerous questions pertaining to his time as mayor and his presidential campaign, covering topics like healthcare, gun control, the criminal justice system, gerrymandering, and the future of the Republican party.

At one point, O’Malley shared the story of how he first became involved in politics while still enrolled at Catholic University. When he was 19 years old, O’Malley began volunteering on the longshot presidential campaign for Gary Hart, a senator from Colorado.

“After class, I would jump on the [Metro’s] red line and would go downtown to work on his campaign,” O’Malley said. “I started going in once a week and by Christmas vacation 1982, that once a week turned to twice a week and then every day.”

As time went on and people left the campaign, O’Malley took on greater responsibility, eventually earning the title of Deputy Finance Director for the national presidential campaign when he was only 20 years old.

Among the students present during the evening’s discussion was Marie Erickson, a junior English education major, who serves as president of the College Democrats. She noted that O’Malley stayed for over an hour after the event in order to talk with everyone who wanted to meet him and joined a small group of students for continued discussion at a local restaurant.

“We were so impressed with his dedication to engaging with everyone. Several students I chatted with described it as a ‘night to remember’ and one of their favorite experiences at Catholic University,” Erickson said. “It is so exciting for us, as students who are interested in politics, to have an alumnus who is so successful and we are so proud of everything he’s doing.

“I think this was a really special experience because everybody has questions that are near and dear to them and to be able to talk about those with someone who is working in politics can be really insightful, whether that means sparking new interests or just opening a dialogue,” she continued. 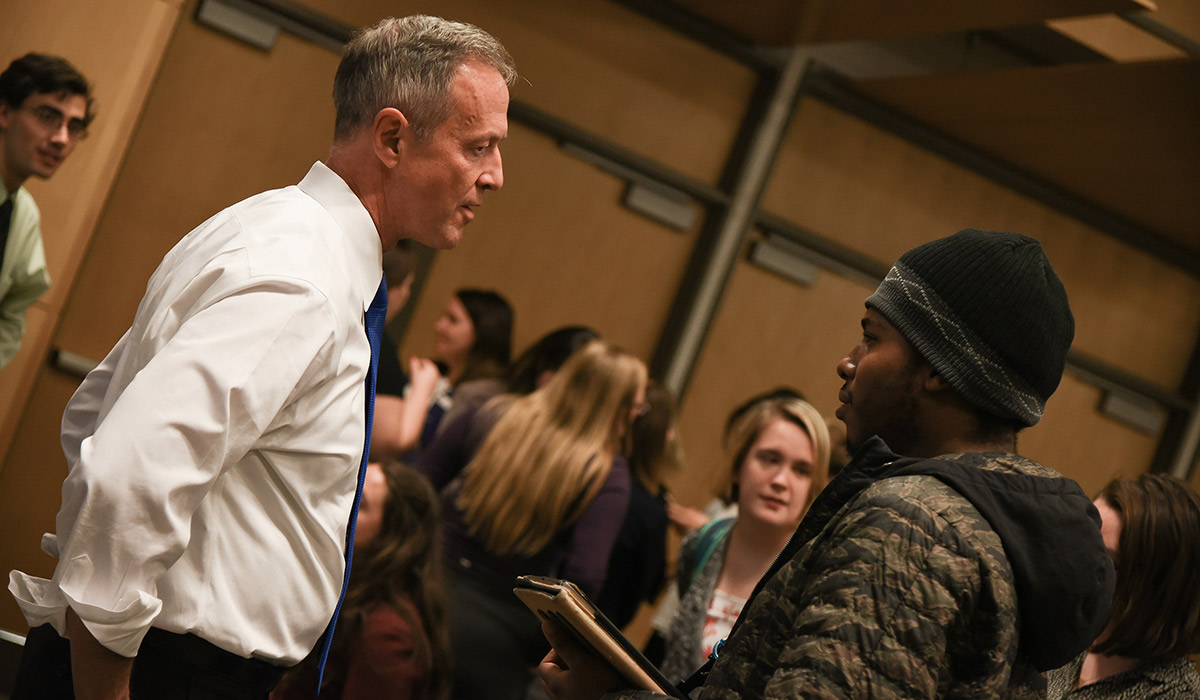 As part of his talk, O’Malley encouraged students to stay active and politically engaged themselves by jumping into “the mosh pits of democracy.”

“She is our country to fix and for all the problems we have, all the polarization, and all the division and fear, the truth of the matter is that as Americans we face the future,” he said.

“I hope that in this room today are future mayors, governors, and state legislators. I hope within these walls today is the future president of the United States. May she get there quickly.”