When an American priest leading a tour group entered Rome’s Basilica of San Bartolomeo recently, he quickly noticed that the interpretive signs in the six side chapels had been translated into English since he had last visited.

Those translations were completed by four Catholic University students who were studying abroad in Rome during the fall of 2018, Alessia Noro, the assistant to the director of student affairs at Catholic University in Rome, was happy to tell the visiting group. Bridget Bagileo, Maria Horner, Rebecca Lemon, and Gabrielle Silvestri, all with different majors and varying levels of Italian language experience, spent their semester getting to know the Basilica and its staff, while translating Italian words they had never seen before.

For these students, one of the most important takeaways from their experience was the connection they formed with the church during their time abroad. “It is rare to get to know enough about or spend enough time in just one [church] to feel at home like you would at a parish in the U.S.,” said junior Bridget Bagileo. “Having the opportunity to return to and work at San Bartolomeo allowed me to feel like a parishioner at a church thousands of miles from home.” 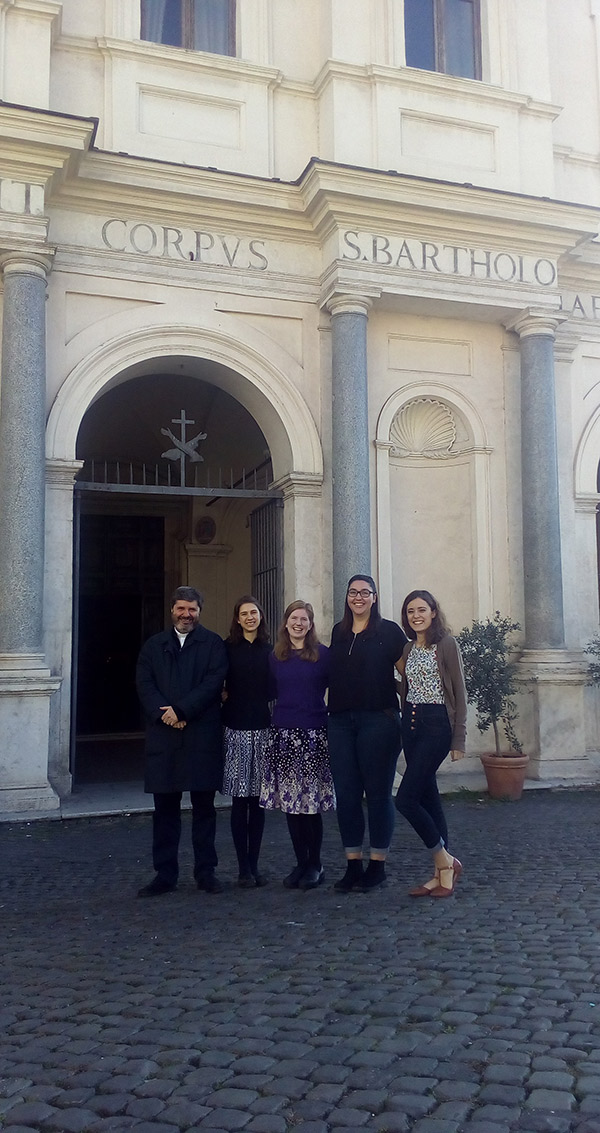 In 2000, Saint Pope John Paul II designated the Basilica of San Bartolomeo as the Shrine for the New Martyrs of the Catholic Church. The Basilica, built in 998 from German Emperor Otto III to receive the remains of two martyrs, the Apostle St. Bartholomew and St. Adalbert, preserves the memory of women and men of the Twentieth Century, killed because they were Christians. Many of the interpretive signs the students were translating pertained to relics of the modern martyrs. Silvestri was particularly moved by this part of her experience. “Encountering sacrificial love in the modern era, encountering those people who have given everything for their faith, affects us to this day,” she said.

The students’ Italian skills were put to the test in their work at the Basilica. When faced with translating words they had not seen before, sophomore Maria Horner compared her work to a game. “Once I went through the effort of putting it all together and I had this paragraph of English text I could say, ‘Look, I just solved this puzzle,’” she said.

Horner took pride that their work would not just help American visitors, pointing out that “any English speaking person will now be able to understand [the signs].”

The Basilica was quick to use the students’ completed work. “By the last week we were there they already had the signs up in the church in both Italian and now English,” recounted junior Rebecca Lemon, who noted how special it was for her to be able to give back while she was abroad.

“With study abroad it seems like everyone has to help you out, because you’re the stranger, but it can be an interchange of helping,” she said.

According to Noro, the work at the Basilica is still ongoing. Students studying abroad this semester in Rome will also have an opportunity to volunteer. This semester they are working on creating a video presentation of the Basilica, while continuing to provide guided tours.