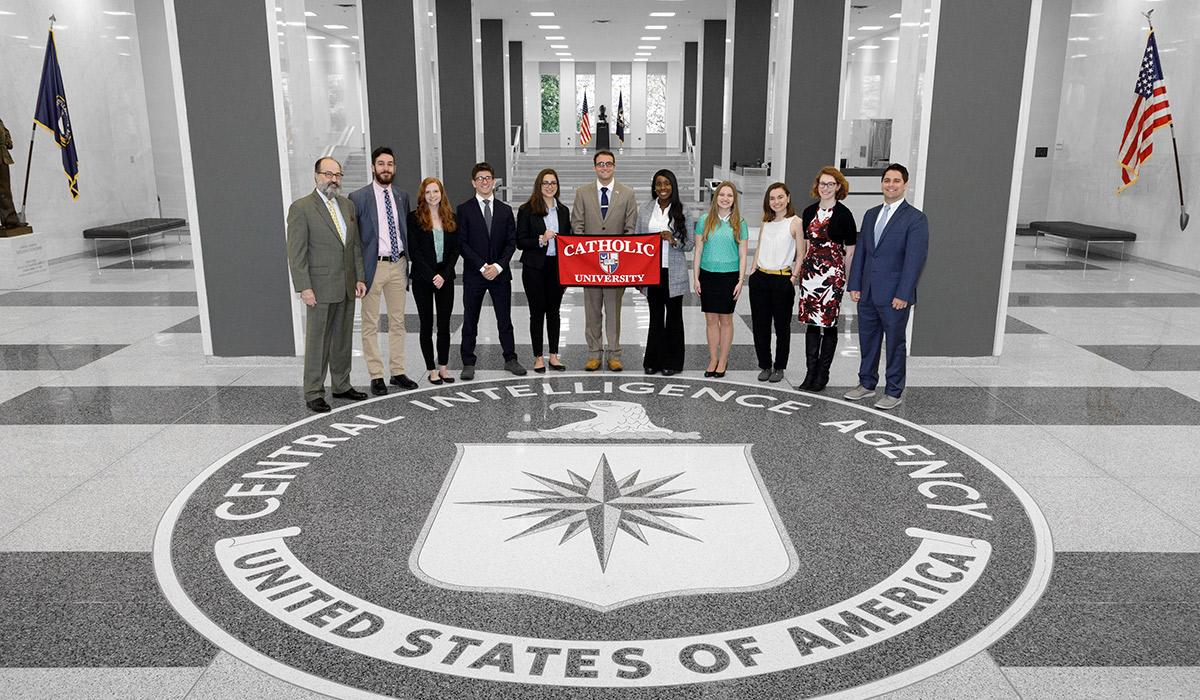 After getting their photograph taken near the iconic CIA seal in the floor of the agency’s lobby, the students learned about CIA’s Memorial Wall, which commemorates officers who have died in the line of service. Next, an agency operations officer and historian briefed the students on a hypothetical recruitment of a foreign physicist with specific knowledge of a program to develop nuclear weapons.

After a lunch break, the students heard from one of Dujmovic’s former colleagues who is now leading a team of analysts focused on foreign violent extremism. The CIA Museum curator then led the students through exhibits on agency activities in Afghanistan after the 9/11 attacks. Before leaving the agency compound, the students visited both the helicopter the CIA used in Afghanistan and also the A-12 reconnaissance aircraft, which still holds the world records for speed and altitude.

This was the third annual trip to the CIA sponsored by the Intelligence Club. Last fall, students visited the museum of the National Security Agency, the National Cryptologic Museum, as well as the National Reconnaissance Office.

Reflecting on the visit, Dujmovic said he was pleased that students could see what the CIA is really like, and what kinds of career opportunities are available to them.

“I’m always trying to give students accurate impressions of what the intelligence world is all about, by introducing them to people in the field and letting them hear stories about what the jobs are actually like,” Dujmovic said. “The attraction of working in intelligence is that there is a mystique to it, but it is not really like how it is portrayed in movies and television. Intelligence is really important, it’s a way to serve your country, and it’s a very interesting job.”

The Catholic University Intelligence Club is open to all students interested in intelligence. For more information on intelligence courses and the Certificate in Intelligence Studies, contact Dujmovic at dujmovic@cua.edu.