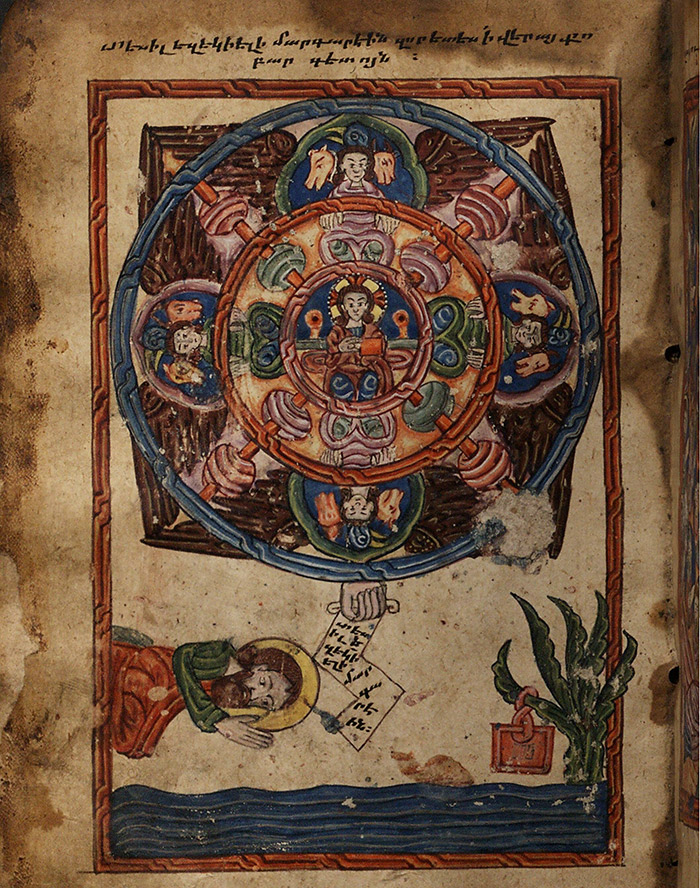 An image for a gospel-book collected by Monsignor Henri Hyvernat that is part of an Armenian collection in the ICOR Library. The drawing depicts a story from Ezekiel (1:1-10) showing the river Chebar, the scroll he is supposed to eat, and the Throne of God above him.

The Institute of Christian Oriental Research (ICOR) and the Institute for the Study of Eastern Christianity are delighted to announce the acquisition of an important research collection. The family of Professor Robert W. Thomson has donated his library (some 3,000 items) in Armenian studies to ICOR. The collection will be housed in the Semitics/ICOR library on the garden level of the University’s John K. Mullen of Denver Memorial Library.

Thomson, a preeminent scholar in all aspects of Armenian culture — language, literature, theology, and history — was Mesrob Mashtots Chair of Armenian Studies at Harvard University until he took up the Calouste Gulbenkian Chair in Armenian Studies at the Oriental Institute, Oxford, from 1992-2001. From 1984 to 1989, Thomson was director of the Dumbarton Oaks Research Library and Collection in Washington, D.C. After his retirement he lived in Oxford until his death in 2018.

The study of Armenian language and culture at Catholic University dates back to its foundation: Monsignor Henri Hyvernat (1858-1941), the first professor appointed to the University, worked with Armenian texts, as did his student, Rev. Arthur A. Vaschalde, C.S.B. (1871-1942). Robert Meyer, professor of Greek and Latin, also taught Armenian, followed more recently by Monica Blanchard, Semitics/ICOR Collections curator and lecturer in Semitics, and Robin Darling Young, associate professor of Church History.

“The library of the late Prof. Robert Thomson is a key addition to the ICOR collection,” said Aaron Butts, director of ICOR. “ICOR already boasts one of the best library collections in the world for the study of Syriac, Coptic, and Christian Arabic, and a 2016 donation by Gerald and Barbara Weiner made ICOR one of the most important collections of Ethiopian manuscripts as well. Thanks to the Thomson family, Armenian can now be definitively added to the list of strengths of ICOR. The donation of Prof. Thomson’s library, combined with our existing faculty resources in Dr. Blanchard and Prof. Young, positions The Catholic University of America to become a major research center for Armenian studies.”

Numerous local scholars — including faculty, staff, and students at Catholic University — were fortunate to learn classical Armenian when Thomson generously offered classes in the language at Dumbarton Oaks. Catholic University is one of the few institutions in the United States to offer classical Armenian instruction, and Blanchard is currently teaching a reading class in the Semitics department.

ICOR and the Institute for the Study of Eastern Christianity will honor the memory of Thomson, the generosity of his family, and the arrival of the new collection with an event in the fall.