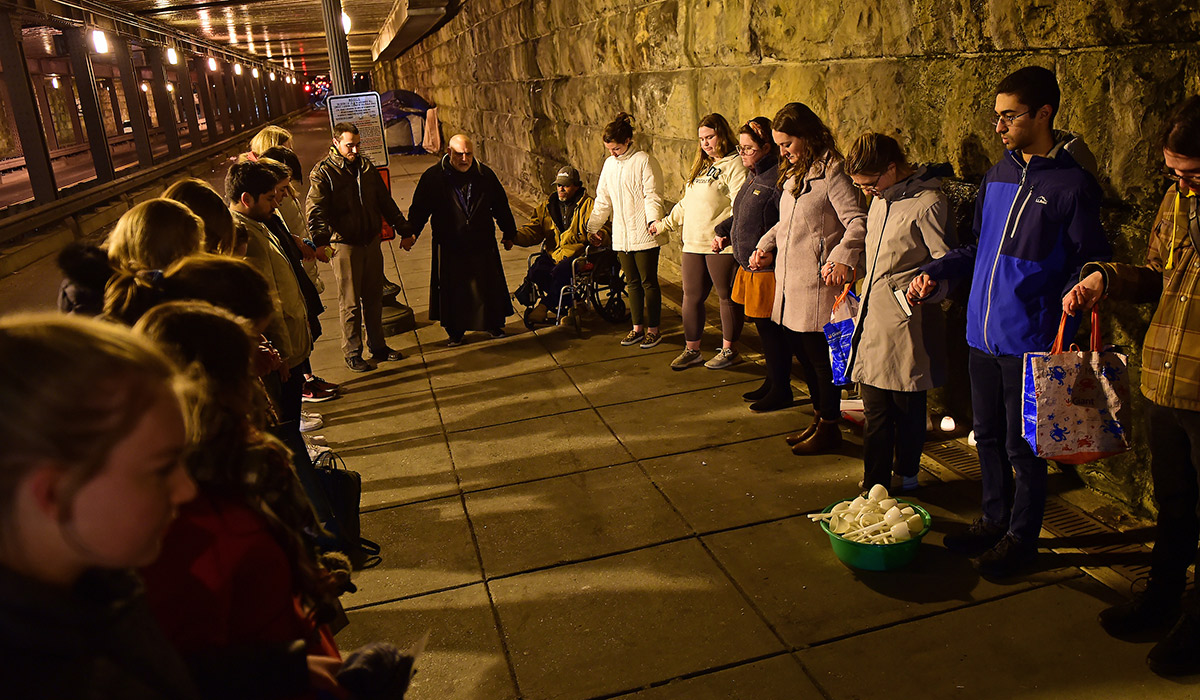 A group of nearly 25 Catholic University students spent the evening of Jan. 16 gathered in prayer in the NoMa neighborhood of Washington, D.C., to remember a fallen friend. Ms. Bobbie, who passed away in December, experienced homelessness for approximately nine years before her death, most recently living in a tent on the K Street underpass for five years. The students had met and befriended Ms. Bobbie while participating in the Office of Campus Ministry’s weekly homeless food runs.

Senior theology major Amanda Martin and senior social service major Katie Connolly planned the prayer vigil and have been participating in the homeless food runs for most of their college careers. During that time, both women have become friends with several members of the homeless community. Martin remembers Ms. Bobbie as a “tough gal” who “didn’t always accept our sandwiches, but was always very gracious and kind.”

“She was a very strong woman and a proud woman and she was a support system for a lot of the other people on K Street,” Martin said.

Planning the prayer vigil for Ms. Bobbie was important to Martin and Connolly as a way to show support and dignity for the homeless community. The vigil took place at the K Street underpass on the same day that residents of the encampment were forced by the D.C. government to vacate the area and relocate permanently elsewhere. Many of the former encampment residents, Martin said, have nowhere else to go.

“It felt like divine providence that we were able to be down there the day that everyone was moved,” Martin said. “It was the least we could do to try to honor her.”

During her time volunteering with the homeless food runs, Martin said she has been inspired to get to know members of the homeless population and learn from their life experiences.

“As students, we go down there every week, we give sandwiches and we have conversations, but we can’t fix the bigger problems that these people are facing,” she said. “This was a beautiful way to go a little bit further, to love Ms. Bobbie in this way and to recognize her story, her name, and honor her as a person.”

As part of the vigil, students were led in prayer by Father Jude DeAngelo, University chaplain. Connolly and Martin shared memories of Ms. Bobbie, as did Mike, a member of the K Street community. Together, the group read scriptures, and sang “Amazing Grace.”

“Ms. Bobbie didn’t have what most people would consider to be a beautiful life,” Martin said. “The least we could give her was a beautiful way to be remembered after death.”

—Katie Bahr, assistant director of media relations and communications. Bahr can be reached at bahr@cua.edu.

This video about homeless food runs was completed in fall 2019.