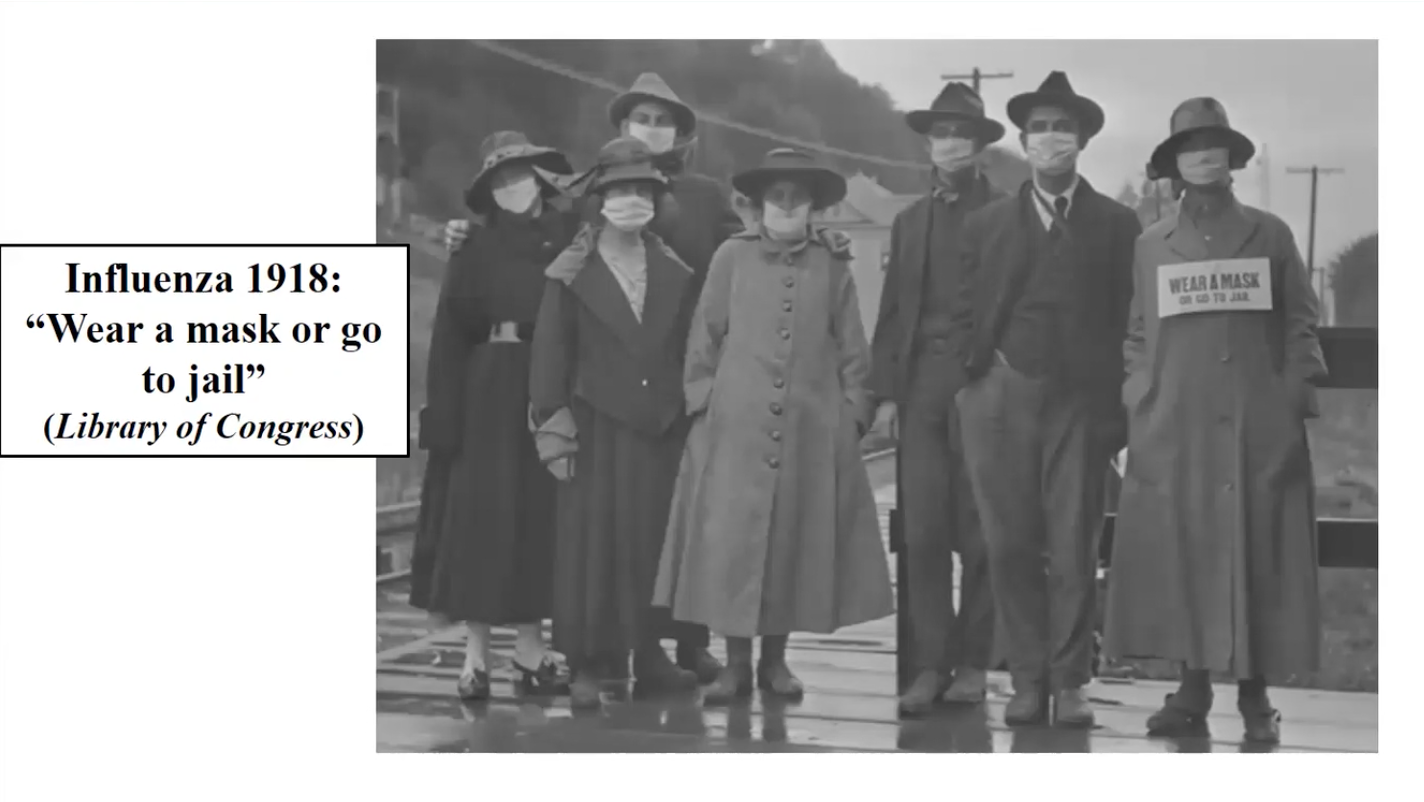 University experts came together on June 4 to discuss the historic impact of pandemics and delve into the mathematics of predictive models. The discussion, “Perspectives on the Pandemic: What History, Politics, and Math Teach Us about COVID-19,” was hosted by the Division of Advancement and the School of Arts and Sciences.

“A perspective on pandemics can help us maintain a sense of proportion on the scope of the challenge that COVID-19 represents,” said David Walsh, interim dean of Arts and Sciences and professor of politics.

For most of human history, Poos explained, more people died from infectious diseases, especially plague, smallpox, and influenza, than from any other cause.

“Pandemics happen when globalization happens,” Poos said, “when people, animals, or things travel long distances and transmit pathogens. Each of the three biggest historical pandemics happened because of big changes in connectivity in different parts of the world.”

The second presentation showed the crucial role of mathematical models in estimating the size and shape of COVID-19 pandemic. Two approaches, through two branches of mathematics, were presented. In the first part, Bhutani talked about a random graph theoretic approach. In the second part, Holliman talked about a differential equations approach.

Bhutani presented two random network models that she has been studying in collaboration with Kalpathy and their co-author Hosam Mahmoud, Professor of Statistics at The George Washington University. “The study we have done with these models can be applied to understanding the spread of the disease,” Bhutani said. “Our research provides a framework to understand the dynamics and properties of growing networks through our graph parameters.”

Holliman discussed how differential equations have been used in modeling coronavirus. “Here we desire to understand how the numbers of susceptible, infected, and recovered individuals change with respect to time and in relationship to each other,” he said. “We hope to study the spread of disease using statistical methods involving multiple regression analysis.”

The final presenter was Love, who studies the ways in which the U.S. government has sought to manage and control the spread of disease. She pointed out that what we are going through today is entirely normal.

“Whenever humanity is presented with a disease for which we have no cure or treatment or vaccine, the only mechanism that we have to protect ourselves against it is through social distancing.” As an example, she cited the response of President Franklin D. Roosevelt to polio.

“He not only had the disease himself but was committed to creating a common cooperative approach to addressing polio by starting the March for Dimes, the idea that everyone can play a role in trying to combat the disease,” said Love.

She explained that Roosevelt socially distanced by leaving D.C. for a presidential retreat, later named Camp David, away from the city. Abraham Lincoln practiced social distance as well, she said. When he came to D.C. during the Civil War, the Potomac river was very polluted with waste. In an effort to safeguard his family after his son died from the polluted water, Lincoln moved them to a cottage not far from where Catholic University is located today.

“There's a lot of evidence shown today that the greater levels of air pollution lead to greater COVID-19 deaths,” said Love. “Every area where pollution levels are the highest is where the deaths rates of COVID-19 are highest.”

More people on earth means a greater number of environmental challenges, Love explained. This is due to humans occupying areas where wild animals were present. In result, more diseases are moving from animal populations to human populations, like COVID-19.

“Sixty percent of infectious diseases today in humans came from animals, and 75% of the most dangerous ones, those that are new and emerging, for which we don’t have any medication, treatment, prevention, or vaccine, are all transmitted from animal populations to human populations,” Love said.

She emphasized the importance of creating sustainable green places, such as those Catholic University is currently building throughout campus. “When we work together, cooperate, and use social distancing tools,” Love said, “we can stop the spread of disease and save each other while saving the planet as well.”