Together, On Campus for Commencement

Cloudy skies did not dampen the enthusiasm of the nearly 1,500 graduates of The Catholic University of America and their families and friends who filled University Lawn on Saturday, May 14, for the first commencement held on campus since 2019.

“I am so grateful that everyone gets to be together — outside — after all this class has been through,” said parent Ann Turgeon, watching for her son Will, who was receiving his B.A. in business management, as the graduates processed in. “I feel a lot of pride and thankfulness.”

This also was the last commencement presided over by University President John Garvey, who steps down at the end of June after 12 years of leading the University. Keeping with his tradition of speaking about the virtues, his remarks focused on the virtue of wisdom.

Telling the graduates that “wisdom is a gift of the Holy Spirit,” President Garvey offered them some last guidance: “Beauty and suffering will take us far, but we can’t be wise without God’s help. Ask the Holy Spirit to be your guide. Make time for prayer.”

Rev. Thomas Joseph White, O.P., the commencement speaker, challenged the graduates to consider what they will take with them from their Catholic University experience. “What should you go forth from here to be? What should you take forth from this place, whose motto is Deus Mea Lux Est, ‘God is my light’?”

He told them, “The most important thing is to take seriously your own human dignity. Being a person is not only a blessing; it’s also a great and terrible challenge, one that can meaningfully occupy our time, whatever we are doing in life, as a lawyer, an accountant, a parent, or a priest.”

“Use your autonomy not for selfishness, but for selflessness,” Fr. White told the graduates.

“You’ve just completed the experience of your life that most explicitly seeks to encourage intellectual searching for its own sake. Don’t sell your mind out now for ideology or use your intellectual gifts merely to advance political and practical aims. We are meant to seek the truth, to contemplate and wonder, to delight in understanding, to dialogue and communicate; in short, to be agents of the truth,” he added.

“...Virtue and beauty, the search for the truth, sacrificial love, redemption, and hope. These ideas are at the core of your Catholic education. Take it forward with you and live it and you will have an interesting and beautiful life, no matter what happens to you,” he said.

He also urged graduates in a world that is increasingly secular to “find the balance of that great Catholic ‘both/and’ that brings with it intellectual integrity and social healing.”

Peter Spence, a politics major with minors in theology and philosophy from McLean, Va., who was among the graduates is looking to do just that. He said, “Catholic University is a place where so many academic fields come together in pursuit of the same thing, truth. The philosophy and theology that I learned at Catholic will…serve as the grounding that I need to pursue a successful career in business. I'm grateful to the school, professors, and administration for their dedication to the authentically Catholic mission of the college and their commitment to forming the spiritual and academic lives of their students.”

Honorary degrees were awarded to Fr. White; John Cavadini, director of the McGrath Institute for Church Life at Notre Dame; Most Reverend Borys Gudziak, metropolitan-archbishop of the Ukrainian Catholic Archeparchy of Philadelphia; Jimmy Lai, media founder and Chinese human rights advocate; Mother Mary Assumpta Long, O.P., co-founder of the Dominican Sisters of Mary, Mother of the Eucharist; and William Mumma, CEO and board chairman of the Becket Fund for Religious Liberty. 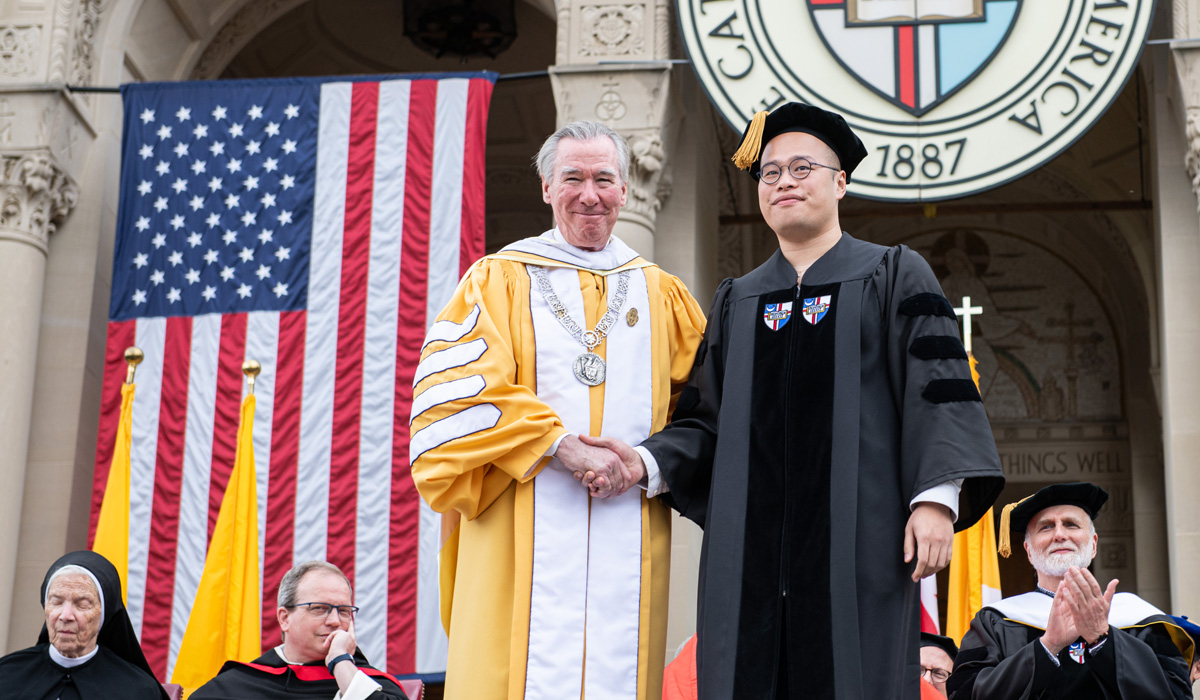 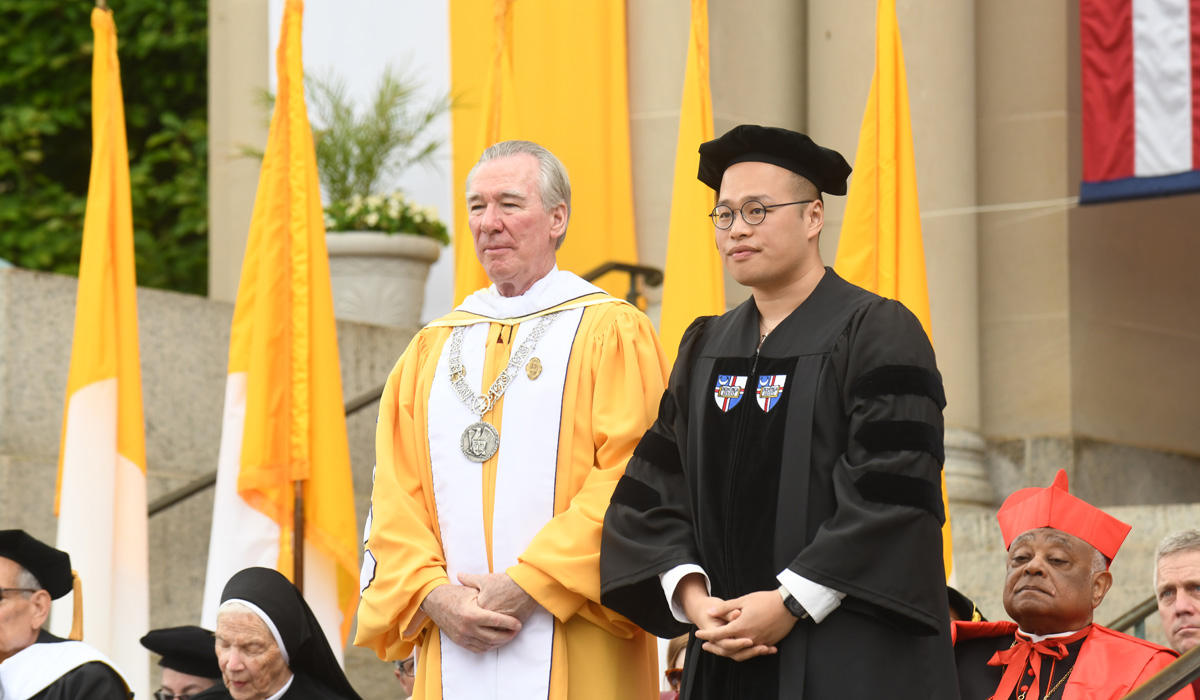 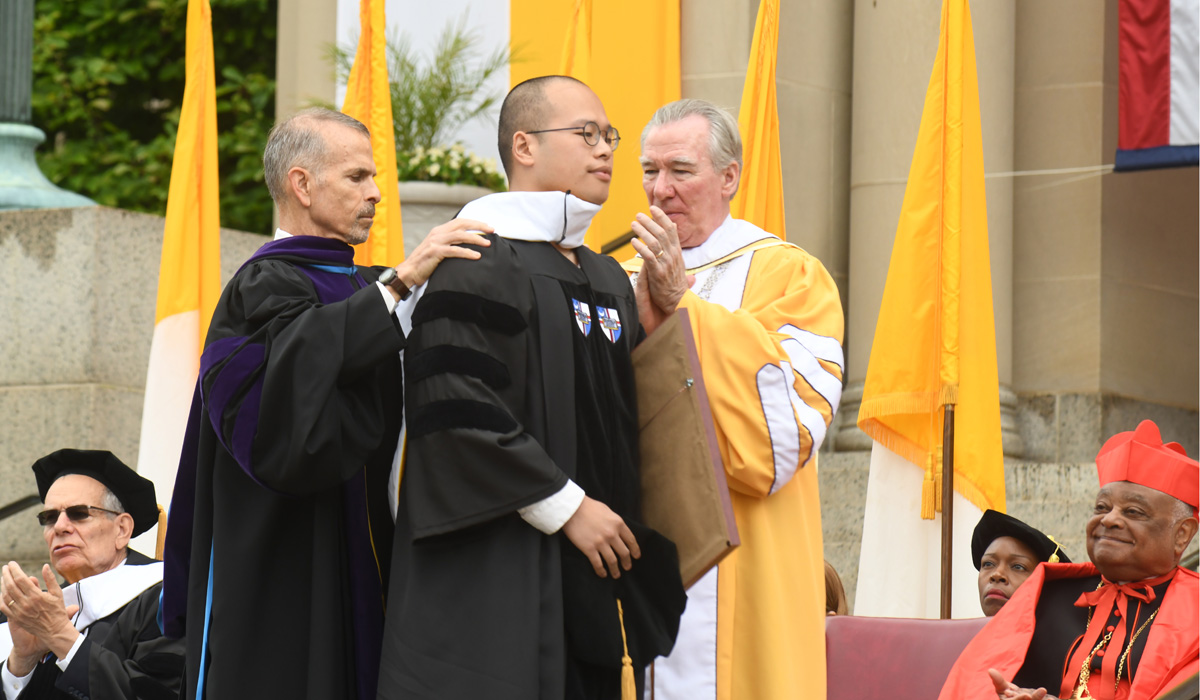 A poignant moment — and sustained applause — came when Sebastien Lai received the honorary degree on behalf of his father, Jimmy Lai, a prominent human rights advocate who is imprisoned in Hong Kong. Just days before commencement, Cardinal Joseph Zen, archbishop emeritus of Hong Kong, also was arrested (then released) by the authorities. Cardinal Zen baptized Jimmy in 1997.

Abigail Anger received the President’s Award. The president of the Student Government Association this year, a resident minister, and an active leader and volunteer in many programs, Anger will spend the next two years in eastern Kentucky with the Teach for America program.

Just before the alma mater and benediction, President Garvey concluded his last commencement message as president, telling the graduates, “Congratulations all of you. It’s been wonderful to be here with you.” 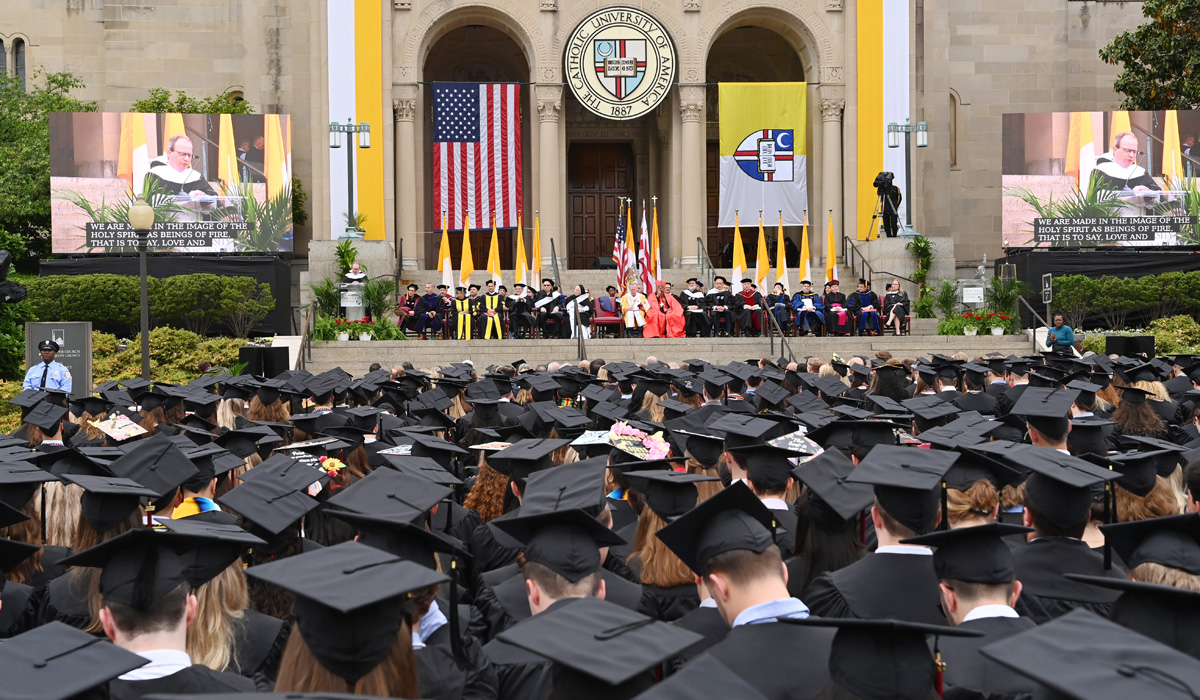 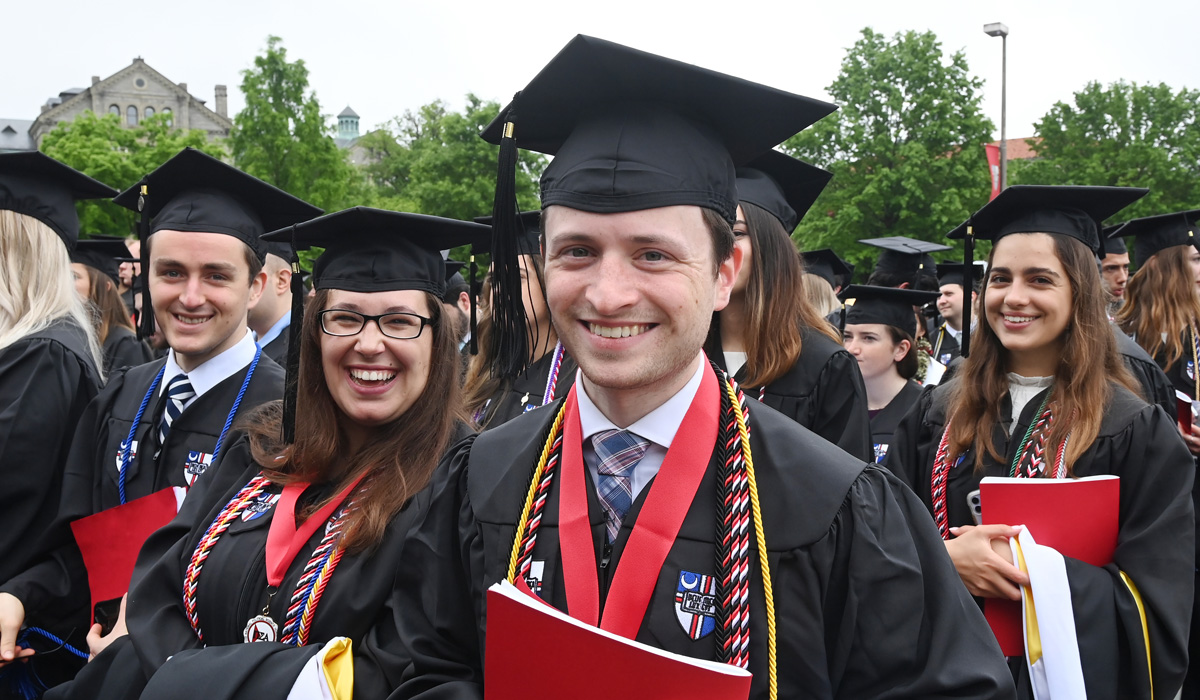 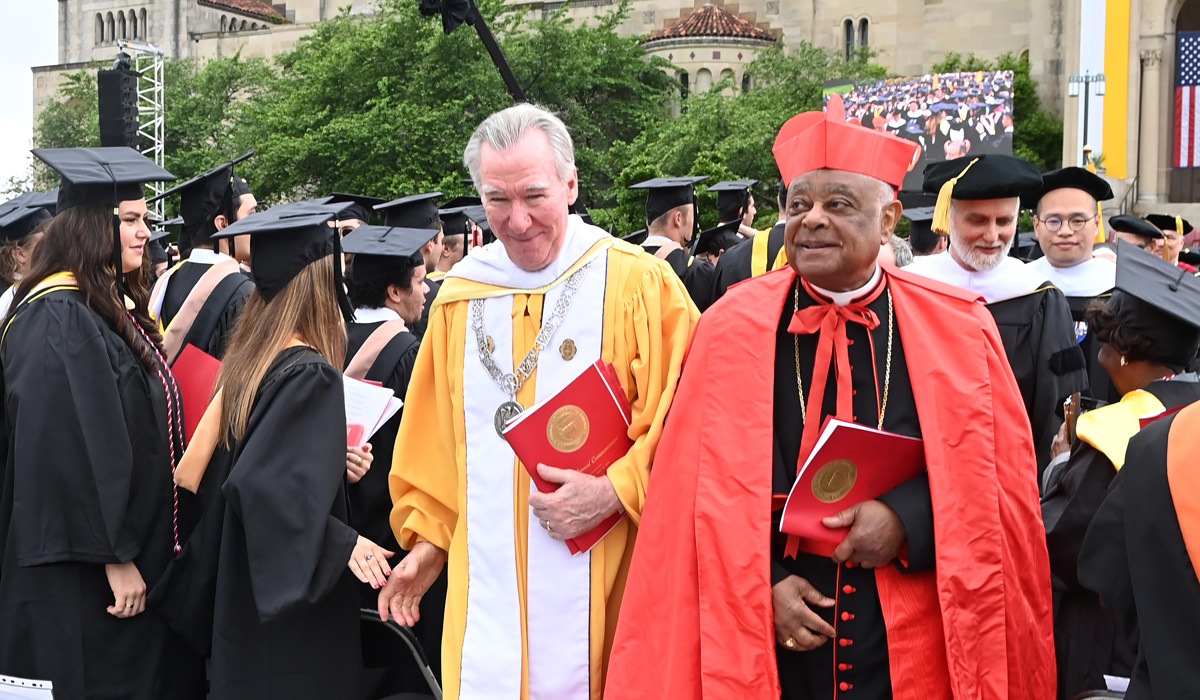 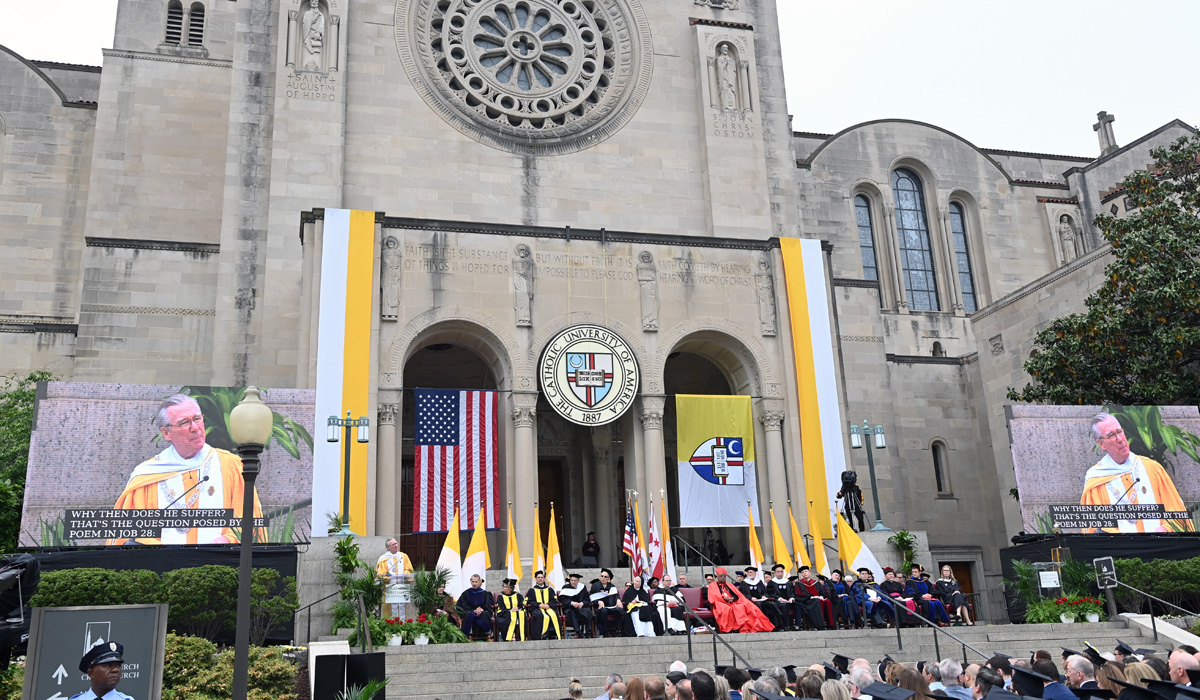