At Catholic University, students can choose 'AND, not OR'

Many find the freedom and support to take diverse paths simultaneously.

“I think it’s a particularly interesting concept,” Lyons explains, because probability is an abstract concept and you’re making it a physical entity; you’re treating it like a mass — density is mass over volume.”

For Lyons, a double major in physics and studio art in her senior year, much of her art is inspired by her studies in physics. Lyons came to Catholic University as a physics major with a love of art. She began taking art classes and soon realized she was equally interested in both fields and wanted to integrate them in her studies.

As she sees it, physics and art are “different ways of learning about how the world works around me. Physics is very analytical; we’re breaking apart mathematically how we understand the world. ... Art is also a way that you’re trying to understand the world around you. It’s just in a very different way in which you lean more on nuance, visual thinking, visual processes. ... You can’t necessarily put a mathematical equation on emotion.”

The theoretical integration that Lyons sees between art and science has been made practically possible at Catholic University. Both the art and the physics departments, she says, “have been quite supportive.” While at some schools “you have to submit a portfolio to even take an art class, Catholic’s art program isn’t like that. It’s very inclusive. So if you don’t necessarily have a strong art background you have the ability to start taking classes and grow from there which is unique.” At the same time, the intimate size of her physics classes has made scheduling classes more flexible.

Lyons is one of many students who have found the opportunity, freedom, and support at Catholic University to take diverse paths simultaneously, whether that’s pursuing multiple academic interests, participating in service rooted in faith and the Honors Program, competing as a varsity athlete and an engineering Grand Challenge Scholar. At Catholic University, students can choose “and, not or.” The “and, not or” approach is built into the character of Catholic University. It’s a spacious residential campus within a major city, it emphasizes both world-class performing arts and advanced scientific research, and it is committed to the pursuit of knowledge through both faith and reason.

Finding Common Threads in Architecture AND Economics AND Habitat for Humanity

Sophomore Schola Eburuoh has also found a way to integrate her many interests as an architect major with a minor in economics, an honors student, an RA, and a volunteer for Habitat for Humanity. Eburuoh describes her planner as an “organized mess.” But, she explains, “to me it all makes sense.”

Eburuoh hopes to use her studies in architecture to work in the field of crisis management, helping communities after natural disasters or affected by climate change. After taking an economics course her freshman year, Eburuoh realized an economics minor would be the perfect complement for her interests: “Econ I thought was more math based, but it ends up being about people and ... how we’re living and how we use our resources and I thought that was a great connection with architecture.” The honors program at Catholic University has been another complement to Eburuoh’s interests. Currently she is taking environmental economics as part of the Honors Program’s Environmental Studies sequence.

The personal attention of her professors has helped make it possible for Eburuoh to forge her unique path at Catholic University. One of her architecture professors, for example, made her Environmental Design I class an honors course just because she knew architecture students can have a hard time fitting the honors sequence courses into their schedules."

Catholic University has also allowed Eburuoh to find a deeper purpose to her study through service rooted in faith. Eburuoh began volunteering with Habitat for Humanity her freshman year and now serves as the advocacy and affiliate relations chair for the group. “It was so cool to see the different aspects of housing and honestly goes really well with my major.” But “when you realize that you’re doing something that’s also for the greater good and for people who need it the most it’s the best feeling ever.”

“It seems like a lot and it is a lot at times,” Eburuoh admits, “but I honestly feel very blessed to have the life I live and the people who support me and especially through God’s grace, everything that I’m doing somehow goes together.”

Diving into a Challenging Engineering Program AND a Championship Swim Team

One of the reasons junior George Isaacs decided to come to Catholic University from Louisville, KY, was the swim team. He received a letter from coach Paul Waas his junior year and really liked the swim team when he came to visit. But Isaacs was also interested in being in Washington D.C. As an electrical engineering major and computer science minor, D.C. is an ideal place, Isaacs explains, because “it has just a lot of great engineering jobs,” especially related to defense, “and that’s kind of where I want to go.”

Isaacs’ decision has paid off. The swim team won the Landmark Conference Championship his freshman year for the first time. This year, Isaacs is one of the team captains.

The Department of Electrical Engineering and Computer Science has also proved to be an ideal place for Isaacs to pursue his academic interests. “I love how small the school [of engineering] is,” Isaacs explains, “because I have such a close relationship with my professors.” This past summer, Professor Nader Namazi, chair of electrical engineering and computer science, helped Isaacs land a research position at a U.S. Army research center devoted to advancing soldier capabilities. Isaacs spent his summer designing a program using neural networks and artificial intelligence.

Isaacs also participates in the National Academy of Engineering’s Grand Challenge Scholars (GCS) program, which prepares students to help solve some of the biggest challenges facing society today, from providing access to clean water to making solar energy more affordable. Catholic University is one of 62 universities across the globe and the only school in Washington, D.C., with an NAE approved GCS program. As a Grand Challenge Scholar, Isaacs’s senior design project will be based on one of the 14 grand challenges proposed by the NAE; he also has to take classes in entrepreneurship, go abroad, attend seminars, and participate in community service. The goal, he explains “is to make students well-rounded engineers.”

Balancing the demands of swim team with the demands of the engineering program can be challenging, Isaacs admits. The swim team practices five afternoons a week with meets on the weekend, while engineering labs are usually later in the day and usually take three to four hours. “So, I usually make like three [swim] practices a week,” Isaacs says. When he can’t make it, he gets together to swim with other students who also had to miss practice.

Being an NCAA athlete and an engineering honors student has been possible at Catholic University in a way it might not be at other schools. At a D-I school, Isaacs explains, “I don’t know if I would be able to do an engineering degree. It would be more intense, I like the flexibility of D-III. ... My coach here realizes we need to have a balance between swimming and school.”

Lyons has had a similar experience as a member and captain of the cross country team. Running seven days a week while completing two majors can be a challenge. But the "coaches are understanding." Ultimately, Lyons says, “The unique part of this university is that you can do pretty much anything you want so long as you’re creative enough and driven enough,” says Lyons. “The support is there, and the opportunities are there.”

END_OF_DOCUMENT_TOKEN_TO_BE_REPLACED 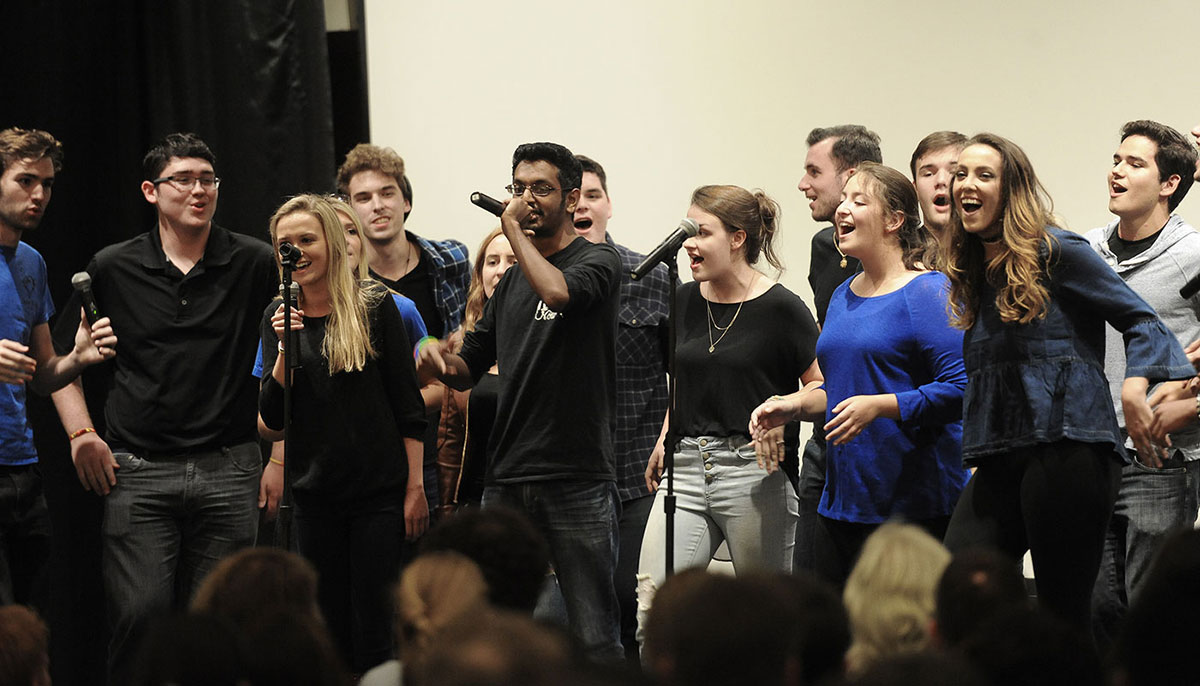 Find out what it's like to be a student at Catholic University.

END_OF_DOCUMENT_TOKEN_TO_BE_REPLACED

Find out what it's like to be a student at Catholic University.