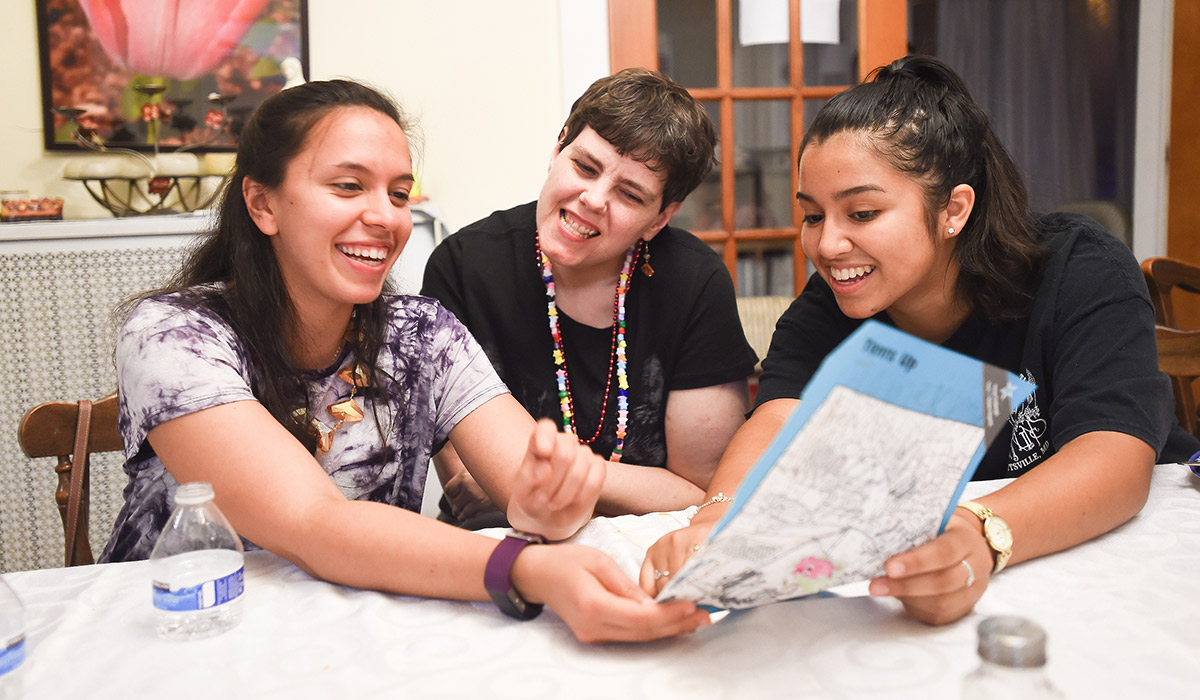 Every Wednesday night, Catholic University students gather for prayer and friendship at Bethlehem House in Brookland, a residential home for adults with intellectual disabilities. Though friendships between college students and Bethlehem House residents may seem unlikely, they are the result of Catholic University’s chapter of Best Buddies, an organization that pairs college students with adult “buddies” who have disabilities that make it hard for them to live independently. After they are paired, the students are responsible for forming relationships with their buddies — calling or visiting at least once a week and serving as a friend when times get hard.

These weekly get-togethers, which include Mass and dinner, have happened at Bethlehem House since the home opened 33 years ago. Colleen Connor, a nursing major from Massachusetts who graduated in May, says she has attended the Wednesday night dinners at Bethlehem House nearly every week since the beginning of her sophomore year. She was first drawn to Best Buddies because of its warm and welcoming atmosphere.

“Everyone was so nice and you could tell that it was such a good community and everybody cared for each other,” she said. 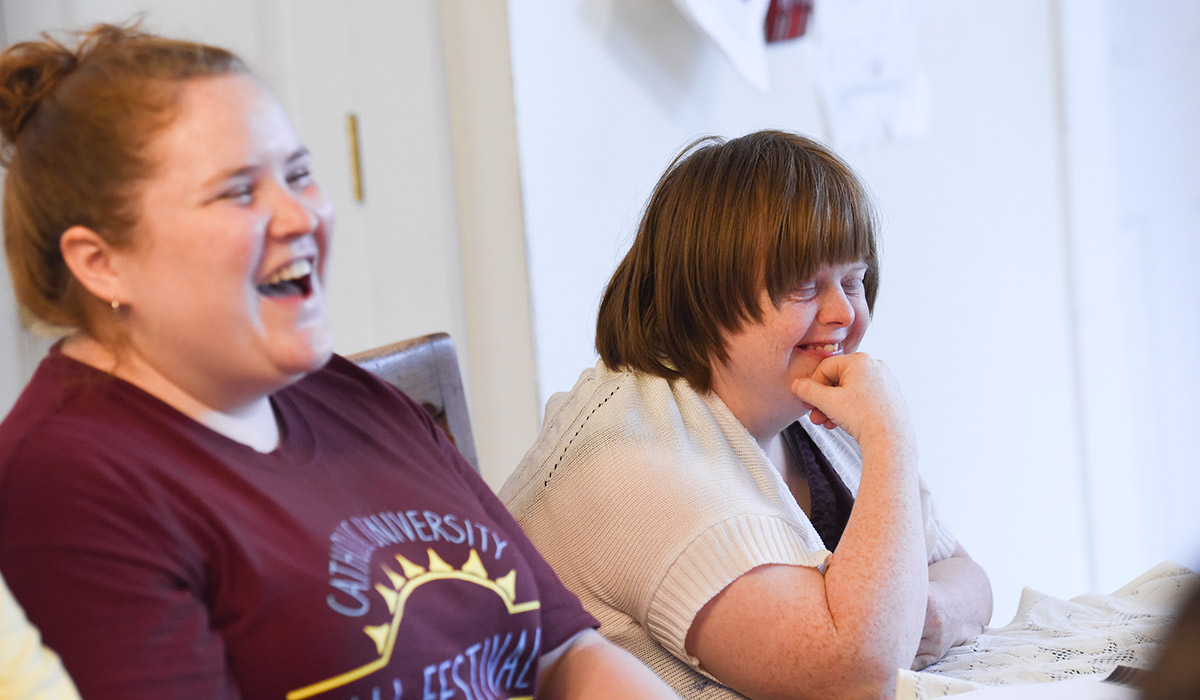 By her senior year, visiting with her buddy Helen and seeing the people at Bethlehem House was much more than a service obligation. Now, she says, the group is like her family.

“Being away at college, it can be hard to find your community or the spot where you feel comfortable,” Connor said. “The group at Best Buddies just reminds me so much of home.”

Rich bonds like the one between Connor and Helen are exactly what Anthony Kennedy Shriver had in mind when he founded Best Buddies International in 1989 as a volunteer movement dedicated to fostering one-on-one friendships and leadership opportunities for people with disabilities.

Catholic University’s chapter was founded in 1991. Last year, there were about 20 students paired up with adults from the community, and around 40 to 50 students who attended events. Emmjolee Mendoza-Waters, associate director of campus ministries and community service, believes the organization has huge benefits for those with disabilities.

“This shows them that there are people who are energetic and loving who want to spend time with them,” she said. “I hope that our buddies feel loved and that they’re made to feel important and not so different. They’re just like all of us, they’re a part of our lives, and a part of our family.”

Juliana Mitchell, a nursing major who graduated in May, has been passionate about helping those with

disabilities for years. That’s why joining Best Buddies was one of the first things she did her freshman year. Soon after, she was matched with a 42-year-old buddy named Kimberlee, who lives at the Bethlehem House in Riverdale, Md.

Mitchell and Kimberlee would meet up at least once a week and at Best Buddies events, which happen once a month and range from an annual talent show, to an Elvis dance, to the beginning of the year party, where new buddies are matched. Often, Mitchell and Kimberlee would talk and color together. Sometimes they would go on walks or go to the movies.

“This is the best decision I’ve made in college and the most rewarding thing I’ve been involved with,” Mitchell said. “The buddies bring a lot of joy to my life, they are just really fun-loving people. I’m always so happy to see them.”

Mitchell also learned a lot from her buddy about patience and respect, traits she knows will help her in her nursing career.

“One of the most important things I’ve learned is that just because someone has developed differently doesn’t take away from their wisdom or their knowledge and that it’s still important to treat them with respect,” she said. “A lot of times, people just assume they are incapable or that they’re stupid or can’t hold a job. They’re very quick to say, ‘Oh, you can’t do that. Let me do that for you.’ I think it's important to meet them where they are.”

Even though college ends, the relationships formed through Best Buddies don’t have to. Many students who were involved with Best Buddies during undergrad keep in touch with their friends for years to come.

Erika Rodkey, B.S. ‘08, MSW 09, PHD ‘18, remained involved in Best Buddies well into her graduate studies, continuing to see her buddy Tom every Wednesday and taking him out for activities. The relationship was so strong that when Rodkey got married, she invited Tom and the rest of the group from Best Buddies to attend her wedding.

Mike Thorsen, B.A. 2016, also had a life-changing experience with Best Buddies. Though he was never matched with a buddy of his own, he became involved as an activities coordinator for Best Buddies and a service leader for Bethlehem House.

“I had never spent time with people with disabilities before I went to college and I was a little hesitant at first,” he said. “Best Buddies really opened my eyes and helped me realize, they’re regular people just like us who deserve the same friendships and the same rights.”

Now passionate about disability rights, Thorsen decided to enroll in occupational therapy school at New York University. Volunteering with Best Buddies taught him a lot about love and friendship, and the power of small kindnesses.

“I remember sometimes you wouldn’t be able to talk to the buddies because either they were being shy or they couldn’t talk much, but just a smile would be enough,” he said. “The idea that a relationship can be formed from something so small as that has always stuck with me. It’s shaped what I want to do with my life, which is dedicate my life to people who only offer love, support, and friendship. What’s better than that?”

This story was adapted from a feature article in the spring 2019 issue of CatholicU Magazine. Read the full article on the magazine’s website.

— Katie Bahr, assistant director of communications and media relations. Bahr can be reached at bahr@cua.edu. 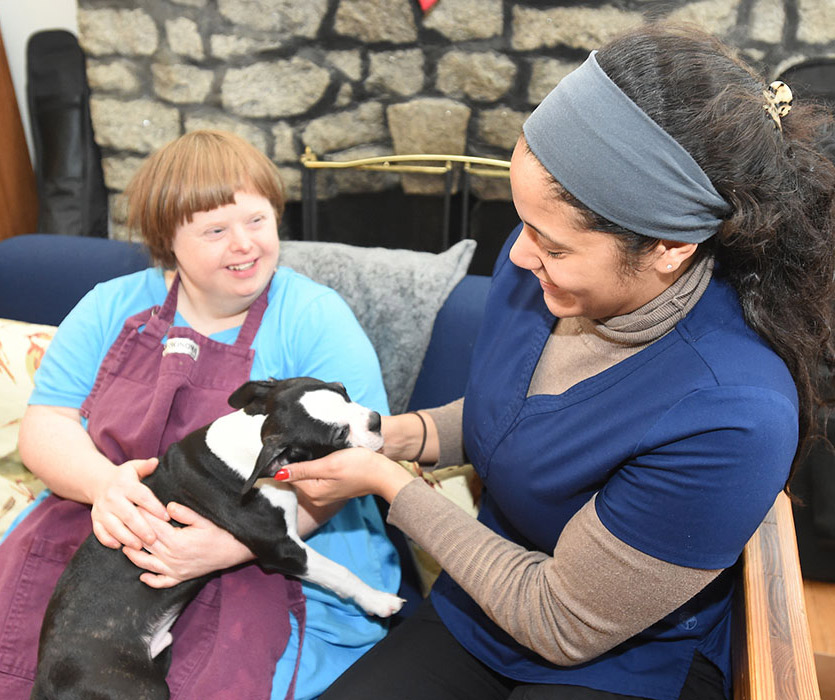 Spend the evening making friends with people who have intellectual disabilities. Enjoy a home-cooked meal while you converse and share in prayer. The residents of Bethlehem House welcome you with open arms and hugs!

Spend the evening making friends with people who have intellectual disabilities. Enjoy a home-cooked meal while you converse and share in prayer. The residents of Bethlehem House welcome you with open arms and hugs!


Volunteer at Bethlehem House
Back to Top