Learning at the Border

Sometimes the most impactful educational experiences take place far outside of classroom walls. For sophomore Frank Gaetani, a social work major from Lynnbrook, N.Y., one lesson he will never forget came during a visit to a juvenile detention center in El Paso, Texas. Gaetani visited the center as part of a recent University course on immigration in America.

While in the center, Gaetani and his classmates spoke with young people who migrated to the United States alone to escape economic struggles and violence in their own countries. After long and dangerous journeys, many were facing deportation back to their homes.

“It’s hard hearing their stories because the fact that they choose to go through this means they’re coming from somewhere even worse,” Gaetani said. “It breaks my heart to know the things they struggle with because I can’t imagine being their age and having to do it.”

Gaetani was one of eight Catholic University students to participate in the immigration course, which was organized by the Office of Campus Ministry and the National Catholic School of Social Service (NCSSS). After a semester of weekly meetings, the course culminated in a two-week border immersion trip to El Paso and Las Cruces, N.M. The purpose was to help students learn about the realities of immigration, including current government policies, and the Catholic Church’s position on the issue.

NCSSS Dean Will Rainford, who taught the course with Sister Ruth Harkins, I.H.M., associate campus minister for graduate and professional studies, said he hoped students on the trip would encounter immigrants and hear firsthand about their struggles, successes, and hopes.

“I think it’s very important for Catholic University to find ways to actualize Catholic social teaching for our students and for me, that’s what trips like this are all about,” Rainford said. “There’s no way for students to learn about the migrant’s lived experiences, other than by moving out of their comfort zones and relating to people who are out of their normal sphere.”

“Mission trips provide students with an opportunity to put their faith into action,” said Sister Ruth. “These experiences empower them to make the Gospel come alive through acts of charity and justice for all God's people.”

To get a complete understanding of immigration, the group visited priests, social workers, lawyers, and government officials. In El Paso, they took a behind-the-scenes tour of Border Patrol. In addition to the juvenile detention center, they visited an immigration court and a shelter for migrants.

While in New Mexico, the students painted homes of undocumented families living in poverty and visited a nonprofit farming organization focused on educating new immigrants. One morning the students awoke before dawn to help transport altar materials and breakfast burritos to a chile farm, where a local priest celebrated a sunrise Mass for migrant farmers. Because the farmers work eight-hour days seven days a week, this monthly service is one of the only times they can participate in Mass.

Junior Marissa Coene said she was most moved by the group’s experiences working in the colonias — impoverished communities that comprise primarily dilapidated trailer homes. Because most of the people who live in colonias are undocumented, these villages have little in the way of roads or infrastructure.

While painting homes, Coene said she was surprised by the generosity of the people she met. Despite their extremely limited budgets, each family treated the students warmly, inviting them in for cold drinks and homemade lunch.

For Coene, the border immersion trip was an opportunity to learn about immigration beyond what is depicted in the media or by politicians.

“I think being in our own little bubble can make us so closed-minded,” she said. “Coming down here you get to meet real people and learn about the issues face to face.

“Truly what we’re called to do is live in solidarity with these people,” she continued. “We are all one human family and I think that’s the most important thing for us to remember.”

For more information about Pope Francis’s visit to the University, as well as the University’s unique relationship with the Holy See, visit popeindc.cua.edu. 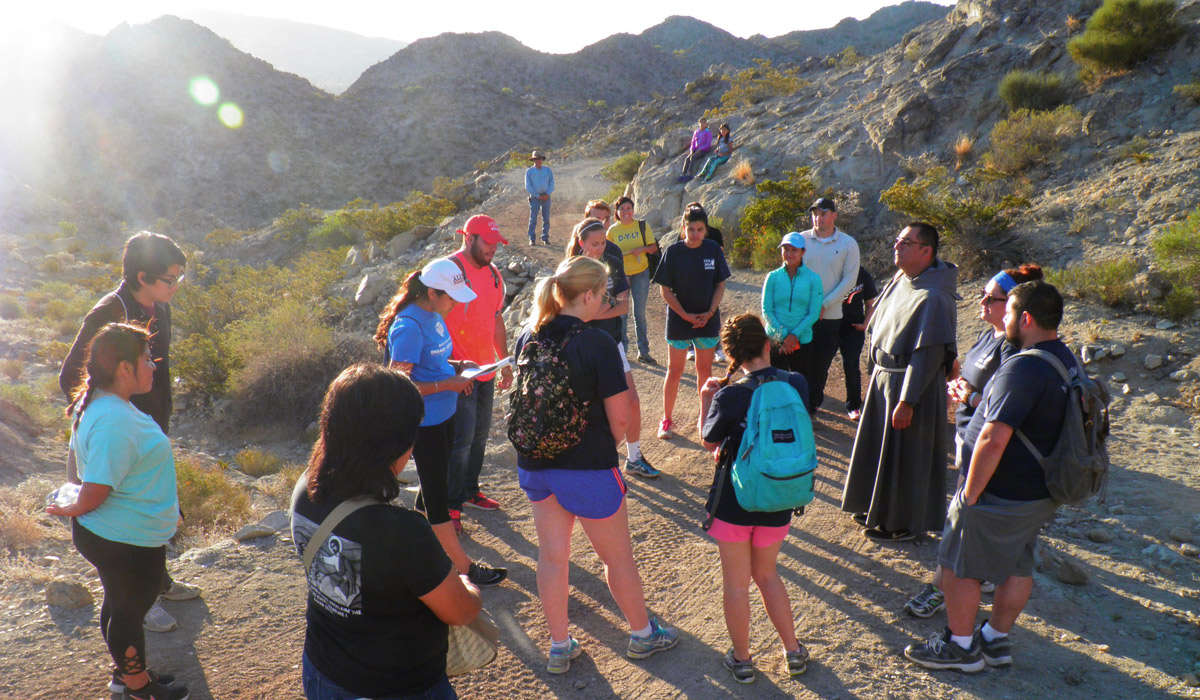 Catholic University students, joined by a campus ministry group from the University of Texas at El Paso, pray the Stations of the Cross while climbing Cristo Rey, a mountain overlooking El Paso. 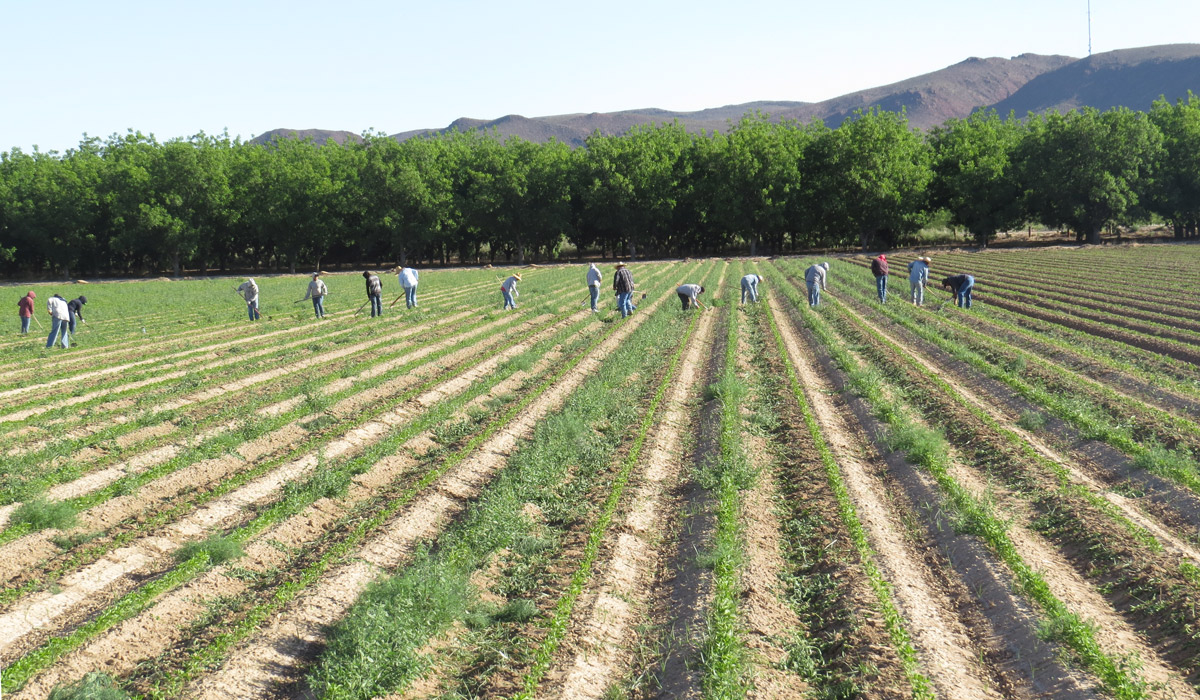 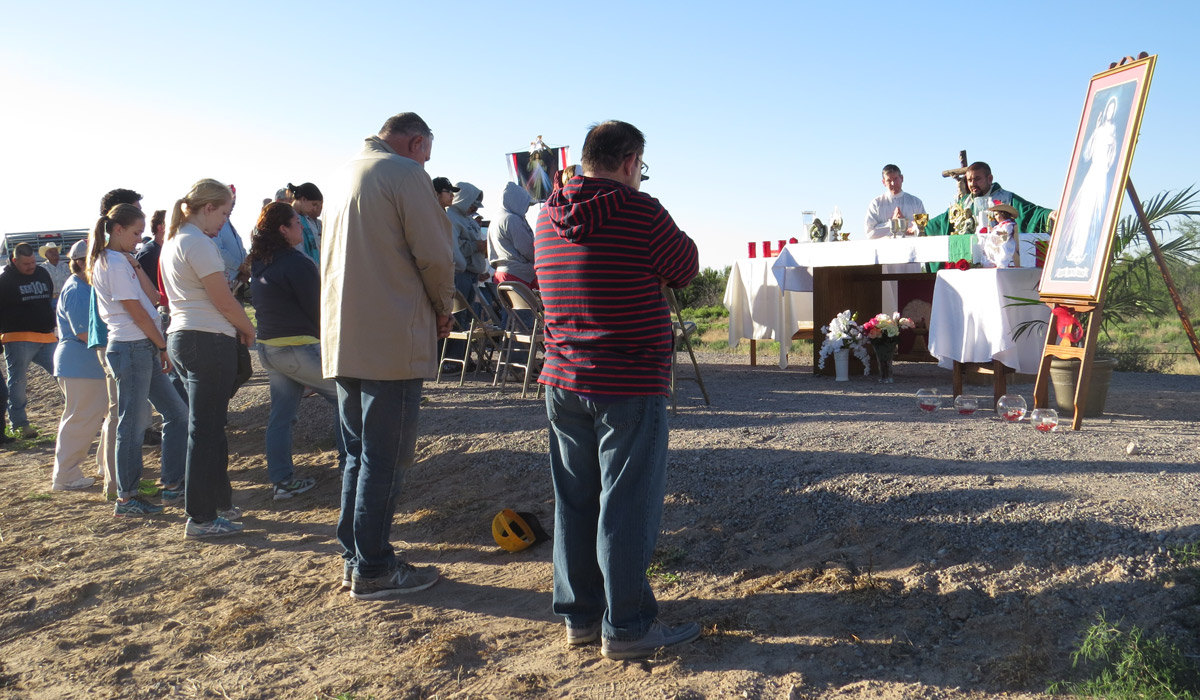 Participants in the Catholic University border trip pray alongside migrant farmers during a sunrise Mass sponsored by the Diocese of Las Cruces. For farmers who work long hours in the field, this was a rare opportunity to attend Mass. 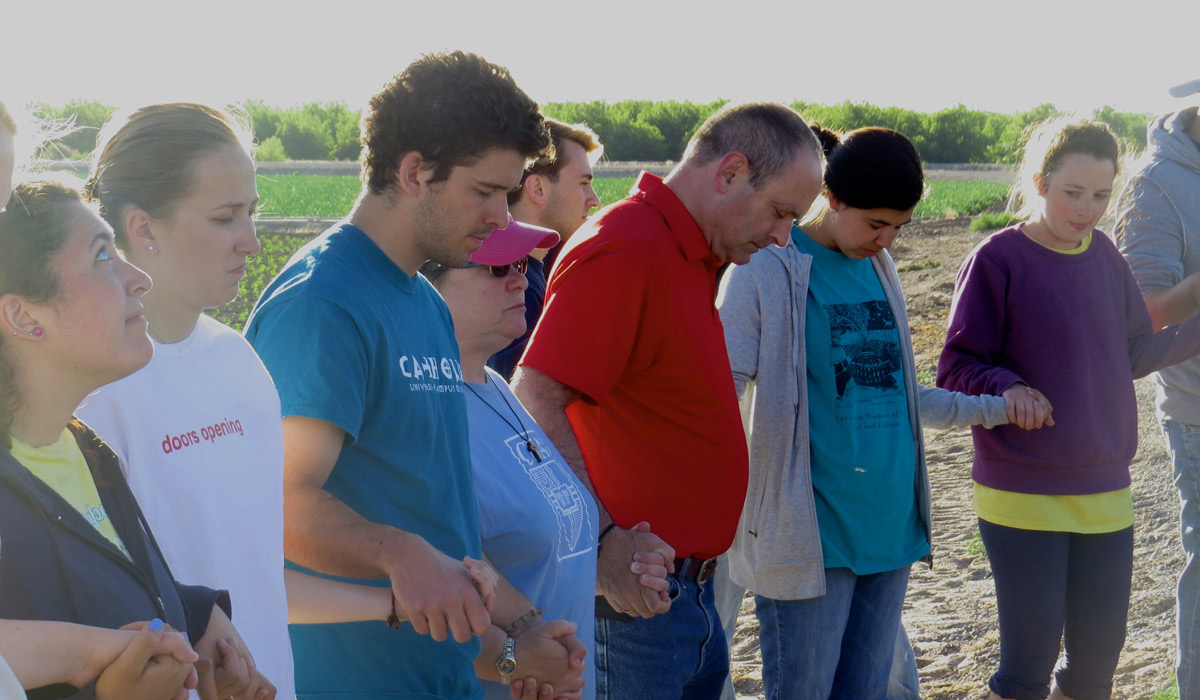 Catholic University students hold hands and pray during a sunrise Mass at a chile farm in Hatch, New Mexico. 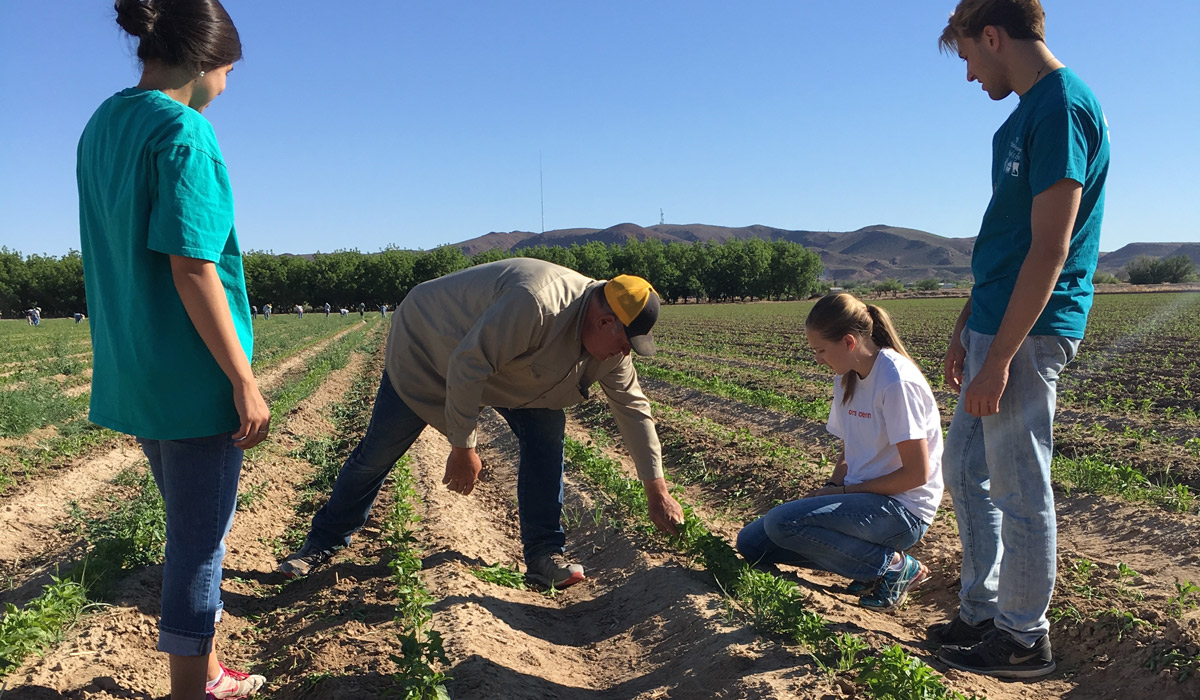 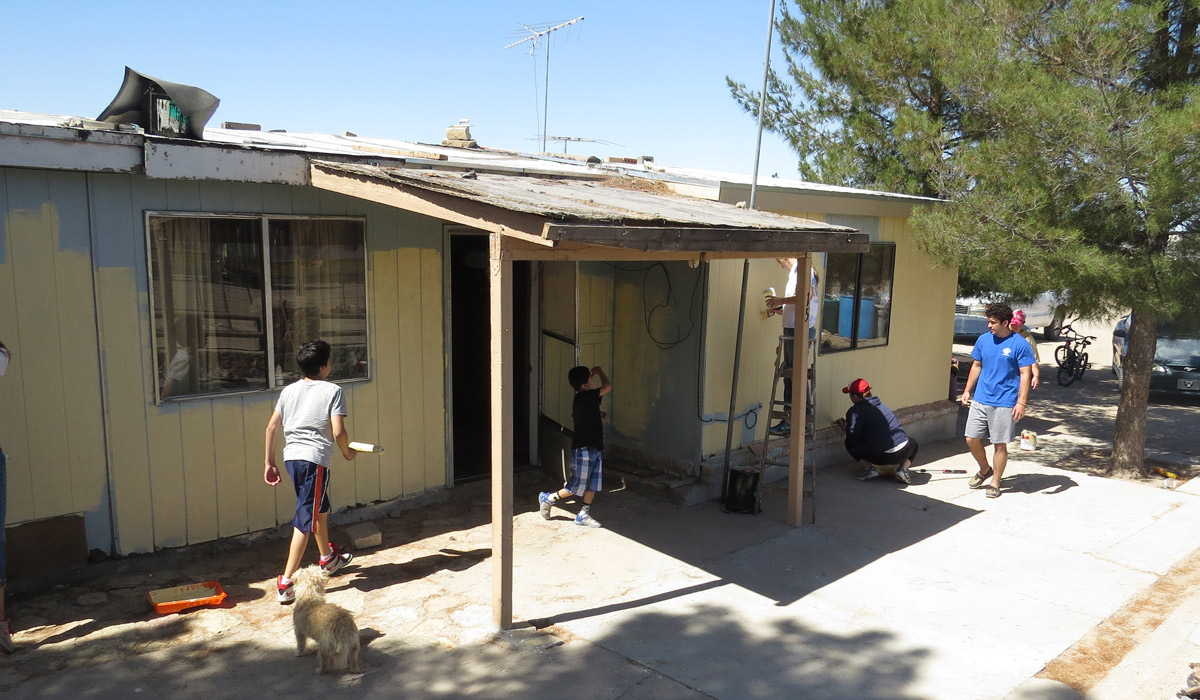 Children play as Catholic University students paint their home in Anthony, N.M. The home is located in a colonia, a poor neighborhood with very little infrastructure.

Senior Sarah Turgeon paints alongside local children during a visit to an impoverished colonia in New Mexico. 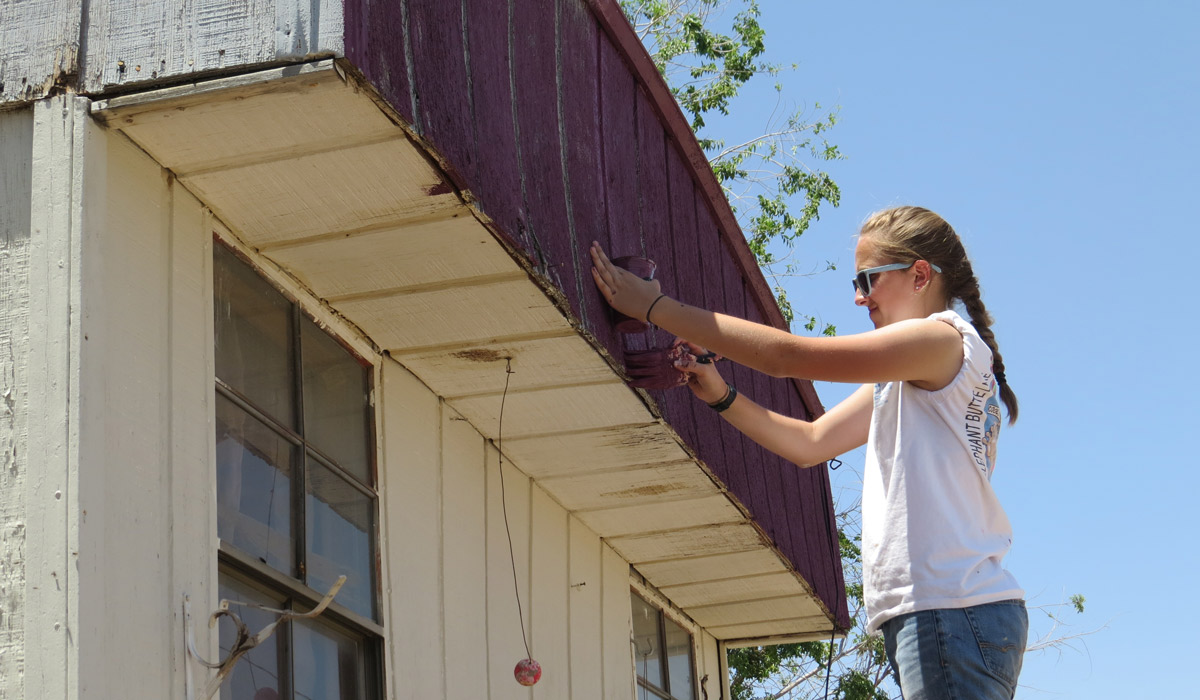 Sophomore Anne Riley paints the garage of a home belonging to an undocumented family in Anthony, N.M. The home belonged to a recent widow and grandmother facing health and financial problems. 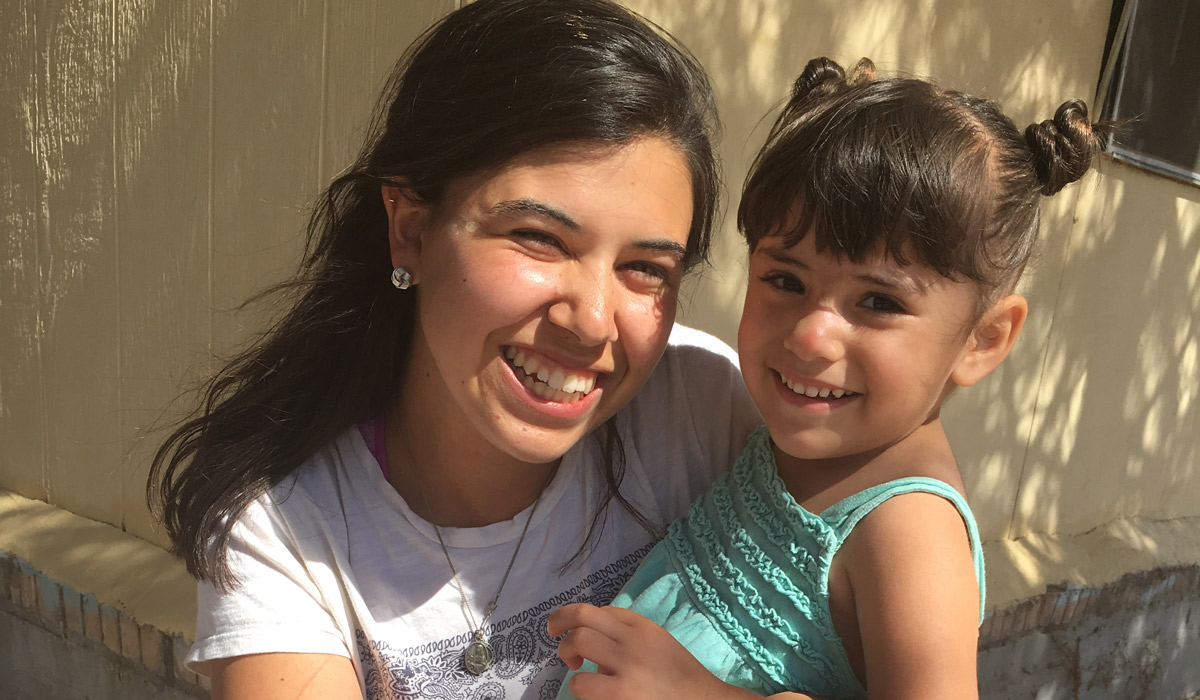 Catholic University students take in a view of the dessert outside Hatch, New Mexico.

Senior Sarah Turgeon assists local workers while they sort onions, during a visit to an onion processing plant in Hatch, New Mexico. The factory visit was intended to help students better understand the work required of immigrants and those living alongside the border.

NCSSS Dean Will Rainford pulls weeds with juniors Marissa Coene and Timothy Farina, during a visit to a community garden benefiting new immigrants.

Students hike to see a small shrine, as part of their border immersion trip to Texas and New Mexico this May.

For more information about Pope Francis’s visit to the University, as well as the University’s unique relationship with the Holy See, visit popeindc.cua.edu.