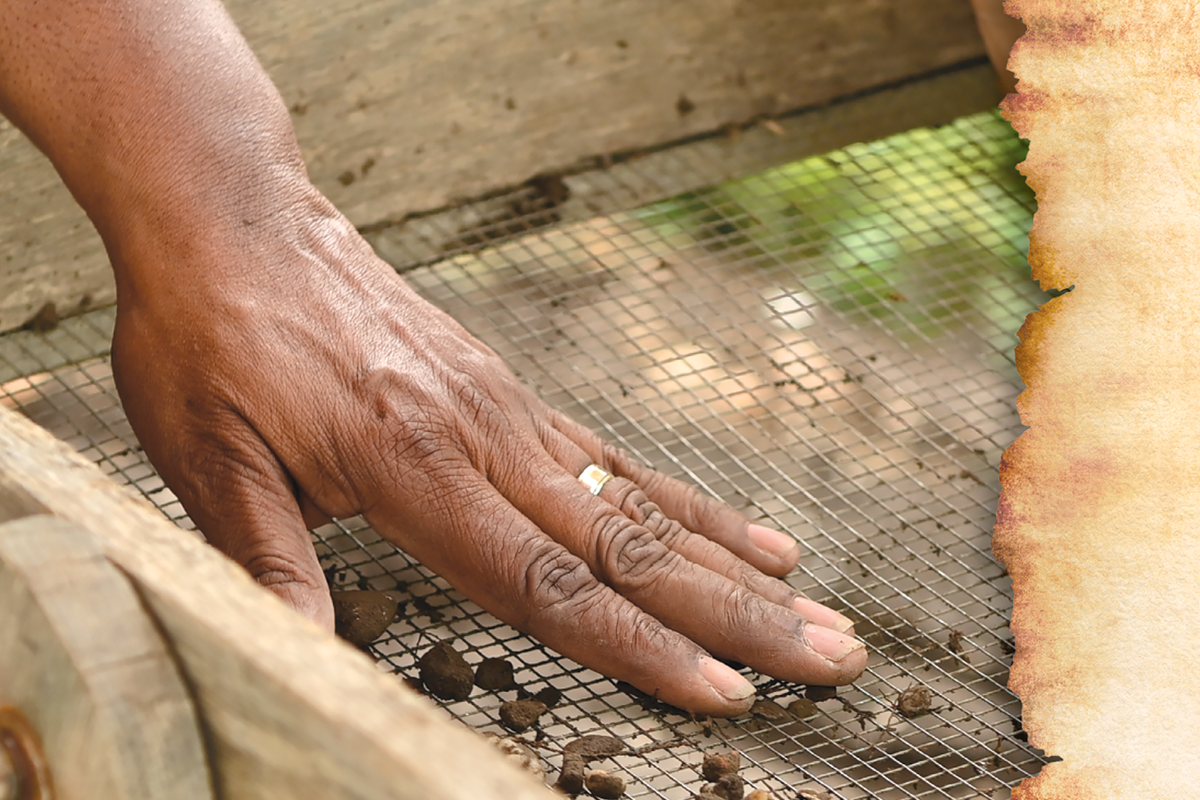 Searching for the Untold Stories of Slaves

Anthropology Professor Laura Masur says her work — which includes digging for artifacts at sites of former slave plantations owned by the Jesuits — does not lead to “a comfortable or easy history.” But in connecting descendants to their ancestors, she finds the rewards that can come with documenting the stories of slaves with dignity.

Henrietta Pike, B.S.N. 1982, grew up hearing fragments of a story from her aunts and mother about an ancestor who “hid in the woods.” Even though Pike suspected that she was descended from slaves, a call from a Georgetown University genealogist brought startling news: Pike was the descendant of a slave sold by the Jesuits in 1838 to keep the D.C. university running.

Pike learned that she was the second great granddaughter of Louisa Mahoney Mason, one of the so-called GU272 slaves sold by the Jesuits to a Louisiana plantation. Mason escaped the trip down river by hiding in the woods near St. Inigoes Manor, a tobacco plantation owned by the Jesuits in southern Maryland.

Eager to learn more about her roots, Pike started exploring her family history. On a hot and humid morning last July, she participated in a dig at the ruins of St. Inigoes. Laura Masur, Catholic University assistant professor of anthropology, who was there with a team of students, showed Pike the spot near a pond where she believes Mason’s small wood-frame house once stood.

On the horizon, Pike could see Priests Point, near the juncture of St. Inigoes Creek and the St. Mary’s River. At that moment, Pike says she felt like she was “coming home and connecting to my past.”

Masur’s research focuses on the Jesuits and the system of plantations they maintained in Maryland and Pennsylvania to fund their missions and ministry during the Colonial Period and into the 19th and early 20th centuries. Masur was working on her doctoral dissertation about Jesuit plantations when news of the GU272 slaves broke in 2016. She suddenly found herself drawn into the national debate about the role of the Catholic Church in the institution of slavery.

Masur notes in her dissertation that the narrative surrounding the Jesuits and their slaves “is not a comfortable or easy history.”

“It is not a story of heroes and villains, but of complex characters who struggled and continue to struggle to come to terms with the relationship between the economic necessities and social values that are integral to the practice of organized religion,” Masur adds.

“It is a narrative that all stakeholders — descendants, locals, clergy, and scholars alike — should seek to understand, appreciate, learn from, and identify with, even if they already know the story.”

Work That Is All about Storytelling

She traces her fascination with history, anthropology, and archaeology to her childhood in the melting pot that is the Northern Virginia suburbs. In high school, she was enrolled in an International Baccalaureate program and took a course in cultural anthropology.

“Growing up, my friends were from very different backgrounds,” says Masur. “Anthropology was a way of uniting my love of history and cultural diversity.”

She learned the terrain of southern Maryland and central Pennsylvania on trips with her family to visit relatives. In the summer of 2002, she visited St. Ignatius of Loyola Church in Pennsylvania’s Buchanan Valley. The site, originally a Jesuit mission, piqued her interest in Jesuit plantations.

Later, at William & Mary, she pursued bachelor’s degrees in anthropology and history and a master’s in anthropology. While working on her doctorate at Boston University, she spent two months as a scholar in residence at Historic St. Mary’s City near St. Inigoes. The Jesuit plantation has been the site of numerous excavations since it was first investigated in the 1970s.

One of Masur’s goals for her research at St. Inigoes was to locate the site of a church that once graced the property. In 2020, she was awarded a $64,000 grant from the Maryland Historical Trust that paid for the use of ground-penetrating radar to locate the foundations of old buildings at St. Inigoes.

Geophysical archaeologist Tim Horsley — part of the team that discovered the legendary fort at St. Mary’s City — spent a week going over the ground, using radar pulses to image what was below the surface. Horsley’s investigation revealed that most of the brick foundations had been removed from the ground. But he was able to detect middens — refuse heaps — and what looked like a cellar, but turned out to be a large pit where clay had been extracted to make bricks.

Masur says she and her team now “have a good lead” on the location of the church, which appears to have been situated in an area known as Old Chapel Field. St. Inigoes Manor remained a Jesuit holding until 1942, when the northern half, approximately 800 acres, was sold to the United States Navy. Today, Old Chapel Field is part of the Webster Field Annex at the Naval Air Station Patuxent River.

The data gathered by Horsley helped Masur and her team decide where to dig their test units to look for artifacts. They conducted excavations last summer at Old Chapel Field and have been digging at Bohemia Manor, another Jesuit plantation in Maryland. Now, the students are cataloging the artifacts on campus at the anthropology lab in Hannan Hall.

Masur hosts a monthly Zoom call with descendants. On a recent call, she talked about the website she’s developing that will showcase the stories of their ancestors and the ongoing excavations at the Jesuit plantations. The website — “Still We Speak: Community Archaeology and Jesuit-Enslaved Ancestors” — is funded by a $25,000 grant from the Social Science Research Council. Masur expects to have the website up and running by this summer.

Masur plans to include on the site lesson plans in social studies and earth sciences for fourth and eighth graders. The lessons will include 3D images of artifacts from the plantations that could be scanned and printed for use in classrooms. The descendants will help to select artifacts that “are meaningful to them, that tell their stories,” says Masur.

“After all, this work is all about storytelling,” says Masur. “We need to showcase these histories so they’re not just stuck in a dusty old book somewhere.”

Over spring break, Masur plans to return to Bohemia on Maryland’s Eastern Shore for another dig with students. Starting in the fall, she is going to offer a field school — training for Catholic University students in archaeological methods — on campus.

Masur notes that training is essential for students so they can experience firsthand the rigors of the profession — digging shovel test pits to determine if an area holds artifacts, extracting items, and washing and bagging them, among other tasks. “This is painstaking work,” says Masur. “We’re out there in all kinds of weather. We get hot, wet, and muddy. I want my students to understand what’s involved.”

Despite the hard work, senior Maria Letizia says she has “fallen in love with archaeology. If Dr. Masur says we’re going to dig next weekend, I cancel everything and go,” adds Letizia, a double major in history and anthropology.

Letizia, who grew up in a small town near Altoona, Pa., was taking Masur’s Historical Archaeology course in the fall of her junior year when Masur invited her to go on a dig. Now enrolled in Masur’s Excavating Theory course, Letizia has been in the field numerous times.

On a dig at Bohemia, Letizia hit pay dirt when she uncovered, as she exclaimed at the time, “a whole-ass brick!” An intact brick is a rare find since many have been removed, possibly by the Jesuits, tenant farmers, or laborers.

Letizia, who can trace her lineage to a great-great grandfather who came to New York from Italy during the Gold Rush, says she’s fascinated by “the social justice aspect of Dr. Masur’s work, helping the descendants unearth what happened to their ancestors and giving them a voice.”

James Chatham, B.A. 2020 — hired last November by Masur as a research assistant — describes the plantations project as “a tremendous learning experience.” Chatham, now enrolled in a graduate program in cultural heritage resource management, is organizing the artifacts and helping Masur assemble the website.

Chatham is responsible for trying to determine the approximate age of about 200 artifacts that have been found at the plantations. He describes sorting through pieces of brick and mortar, nails, and stems of tobacco pipes as a window on “the wonder of archaeology.”

Connecting with Her Ancestor's Painful Story

Henrietta Pike’s second great grandmother was born in 1812. She managed to escape the trip to Louisiana when Father Joseph Carberry warned her, her mother, and a few others of the three-masted slave ship Katherine Jackson pending departure. After hiding in the woods, Mason returned to the plantation. A household servant and fervent Catholic who was devoted to the Jesuits, Mason remained at St. Inigoes, where she died at the age of 97.

When she passed away, the Jesuits offered up a Requiem Mass that drew “a very large assemblage of all classes of residents,” according to a story in the St. Mary’s Beacon. “... none have died in this section of the state who left a more enviable reputation for devotion to her church and honest discharge of all her duties in life, menial and humble as they were.”

Masur notes that working with the descendant community “has been like a family reunion. The project has had a snowball effect, bringing together people who all seem to be related in some way to those who were enslaved on the plantations.”

For Pike, learning the identity of her second great grandmother has enabled her to connect through Facebook with dozens of cousins she didn’t know she had, both in southern Maryland and Louisiana. Pike and her brother have created a Facebook page, where they’re posting information about Mason as a way of preserving her legacy.

Pike met her future husband, Edgar “Ed” W. Pike Jr., B.A. 1980, on a visit to Catholic University in her senior year of high school. Ed was part of a student team that interviewed Henrietta about her application for a scholarship. She describes him as “one of the most handsome guys I’d ever seen.”

While at the University, she started working at a hospital in southeast D.C. A nursing supervisor and certified nurse executive who earned an M.B.A., Pike has worked at the hospital — now the United Medical Center — for 41 years. She and her husband, a retired federal employee who worked in human resources, have four children and live in Waldorf, Md.

Pike says that when she was a student at Catholic University — “a time when people of color were pushed to the side and overlooked” — she never imagined she would one day collaborate with a University professor on a project about enslaved people.

Because the Jesuits kept records about their slaves, Pike — whose family has been Catholic for generations — has access to a trove of information about Mason. But discovering that she was enslaved by priests has been painful at times.

“I’m still coming to terms with it,” says Pike. At the same time, “being on the land where Louisa walked felt really good,” she adds. “Not many people of color can actually say this is where my ancestors lived.”