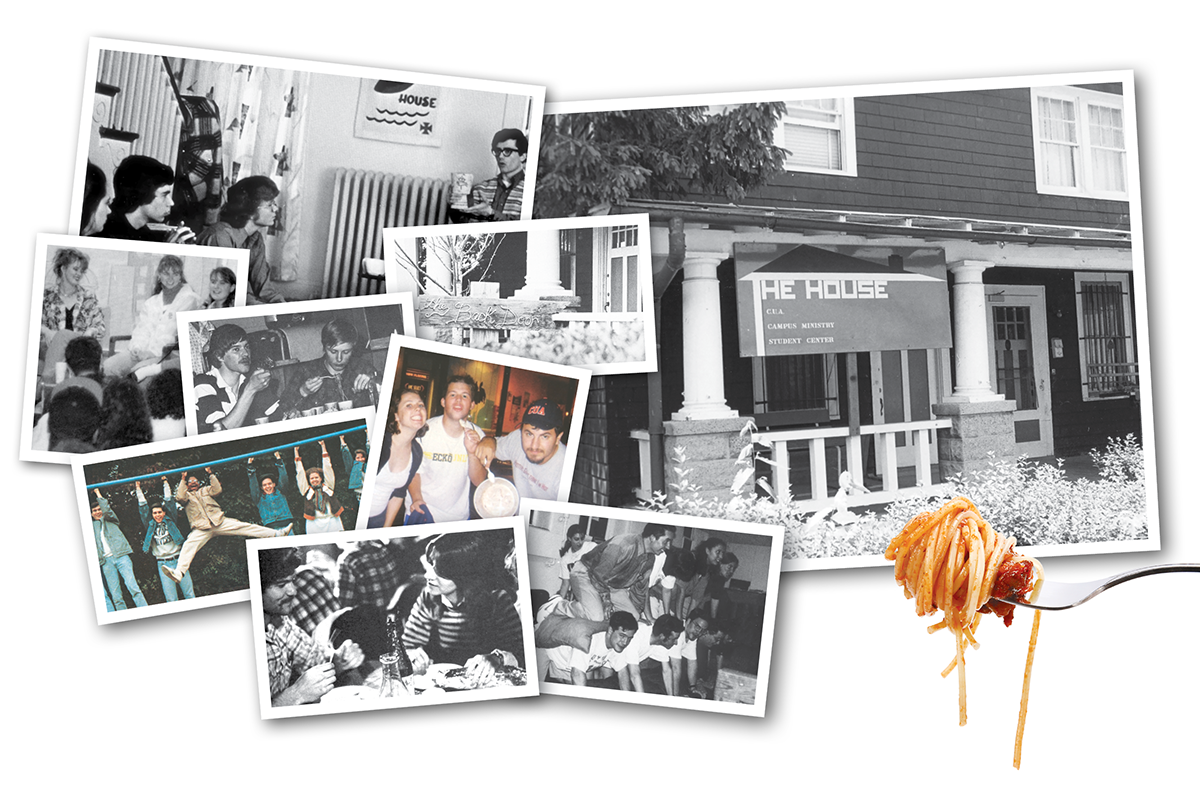 A Ministry of Joy: The House at 50

For five decades, The House has been a cornerstone of student life at Catholic University. From Friday night social events to spaghetti dinners and Tuesday night Mass, the Campus Ministry institution is a well-established destination for fellowship.

In 1972, a collection of about 40 people helped transform the 13 rooms in the former offices of the Special Language Bureau of the Defense Department — at 799 Monroe Street, N.E. — into The House.

The House was created to be a place where students could slow down, unwind from the stresses of classwork, relax and find and build community with other students, learn from each other, and grow in faith. It is a mission that has persevered through generations.

Overseen by Campus Ministry and run by students with the support of University administration, this year The House celebrates 50 years. It might look a little different now — and it’s come a long way from when it only housed four men, including a religious brother, one cat, and two dogs — but the spirit and the intention of The House are the same: to make Cardinals feel at home.

“Since its inception, The House has attempted to create an environment within its small boundaries where students could feel at home, enjoy themselves, and to be, in short, a place where sound spiritual, educational, and psychological growth could develop,” Brother Richard J. Albert, B.A. 1970, S.T.B. 1975, wrote in the first House report in 1973. He added that all the credit went to the House ministers involved, who took on the responsibility of daily chores, activities, and outreach to their fellow students.

The continued existence of The House was endangered several times, first in the late 1970s. According to the 1979 Cardinal yearbook, The House was dropped from the Campus Ministry budget. But students worked to support it and keep it going. House staff needed to raise $6,000 — more than $23,000 in today’s money — in order to fund it for that academic year. They took up collections at each House Mass, raising more than half the needed money that way. The rest came from a benefit concert and the profits from the International Cardinal Charities shows.

From its early beginnings, students loved The House.

In 1981, graduating senior and self-proclaimed “Spaghetti Dinner Graduate” Jeanine Keyes-Plante, B.A. 1981, wrote in a Cardinal yearbook article, “I can look back at my four years at the University and admit that The House has become a major part of my education here. I learned how to laugh with people, how to cry with people, how to type papers in the wee hours of the morning, and most importantly, how to cook spaghetti sauce Italian-style!”

Curry (Lawless) Hagerty, B.A. 1984, J.D. 1989, wrote of the spaghetti dinners, too, in the 1984 Cardinal, equating them to an “Italian grandmother’s paradise. The basement of The House is packed with students devouring heaping plates of pasta, garlic bread, and maybe a glass of wine or two. The genuine camaraderie among members of The House staff is spread to all guests. Friends are made.”

In 1985 Cardinal, Rita (Liuzzo) Santos, B.A. 1985, admitted it was a challenge for the six House residents to come together. “We each came from different backgrounds, lifestyles, and major fields of study. But just as we learned how to organize a spaghetti supper or a Backdoor (coffeehouse), we learned to respect and love each other, and consider each other as family, making it that much easier for members of the University community to feel at home here. Home. That is the spirit that lives in The House.”

Kevin Ryan, B.A. 1989 — husband to Clare, B.A. 1988, who serves on the Board of Visitors for the School of Arts and Sciences — was also a staff member at The House. He said it changed his life. “I lived there from 1988 to 1989 with some great people. I saw for the first time a girl named Clare play her guitar there at a Backdoor event in January ’87,” he recently reminisced. “Thirty-two years, six kids, and two dogs later, I still remember that night and I still listen to Clare play her guitar quite often.”

The future of The House was uncertain again in the 1990s when its location changed due to planned development of Monroe Street. In 1991, the original site closed (it was torn down by 1993), coinciding with the closing of Spalding and Monroe residence halls. After House ministers rallied to help it continue, The House moved onto campus to the lower floor of the northeast section of Caldwell Hall, an area that was a former convent space. This brought it closer to the center of campus. Even with the location change, The House was voted the fourth-most-popular place for students to spend an evening in a Cardinal yearbook poll.

A 1991 document reviewing the history and a proposal to relocate The House outlines another purpose: to grow lay student ministers who will go on to serve others.

“Living in the Campus Ministry House has been one of the most memorable parts of my college experience. It showed me what community is all about,” Amy Sheber-Howard, B.A. 1992, said in a Cardinal yearbook article

“As a freshman I attended House events when it was in an actual house, and I was among the first group when it moved to Caldwell, which was an adventure,” said Kelley Rourke, B.M. 1996. We worked hard to make it nice and suffered a burst sewage situation at one point. And still we had lots of amazing times.”

Molly Dugan, B.A. 1991, compared The House to “The Real World,” only with Catholicism and minus the cameras. “We were ‘The Real World’ before that became a show on MTV. What happens when you put six strangers in a house and ask them to provide a place of respite and community to others?” she said. “I always loved the Tuesday night House Mass, the talent shows, the spaghetti dinners.”

In the 1999–2000 academic year, “Friday Nights at The House” kicked off with board-game nights, scavenger hunts on the National Mall, and sporting-event excursions.

Sally Oram Santellano, B.A. 2003, said there were lots of wonderful memories associated with The House, but tough ones, too, like Sept. 11, 2001. She recalled “Father Brad running to tell us about the first tower and then watching the second fall live on The House TV."

For Mike Tenney, B.A. 2005, now a Christian musician and host of podcast Pop Culture Catechism, The House influenced his choice of career. “House Mass was the first place that ever let me lead music for Mass. It’s where I learned to be a liturgical musician, which is now a big part of my career. I loved those Masses all crammed into the living room.”

The spaghetti dinners continued until at least 2003. During the 2003–04 academic year, The House moved locations again, albeit just one floor up in Caldwell Hall, where one wall of the common room was painted a brilliant orange. The number of House ministers grew to eight.

Cassie George, B.S.B.A. 2019, spent two years as a House minister to Unanue House. “I wouldn’t trade those countless hours prepping for events, praying, and goofing off for anything. This place is so, so special.”

The Friday Night Events — now referred to by current House ministers as FNEs — expanded in scope: Metro Madness scavenger hunts, trips to baseball and hockey games, and ice skating excursions. House ministers over the years have sponsored ice cream socials, Halloween and St. Patrick’s Day parties, barbecues, and game nights featuring everything from an escape room to a CatholicU version of “Love Connection,” all with one goal in mind: to offer a home-away-from-home experience to their fellow Cardinals. (They now work exclusively with first-year students, although all students can attend House events.) It’s a responsibility the 11 current House ministers — all of whom have to apply for the role — don’t take lightly.

House Minister Abigail Treacy, Class of 2022, called what they do “being a minister to joy.”

“The ministers are so much like the residents they work with. We’re all just people who are trying to find their faith here on campus,” said Anna Smyth, Class of 2022. “We’re really there to just walk with people. It’s so much about spreading that joy and being a shoulder to lean on.”

Being a House minister today is a busy job — complete with budgets to manage and individual jobs to keep The House and its programs running smoothly. The House is funded through Campus Ministry, and the student ministers are responsible for planning the FNEs, organizing the weekly House Masses, and ministering to all of the first-year students in their assigned residence halls, including hosting separate events for those students. Events vary depending on the needs of their students. Sometimes ministering is on a smaller scale: simply going to Mass with a student or having lunch together in the Pryz.

The pandemic has made that job more challenging over the past two years. All of The House ministers chose to return to campus for the 2020 school year because first-year students were the only students on campus per the University’s COVID protocol at the time. FNEs continued, either virtually or with limited attendance.  “Ministry during COVID was still fruitful,” said House Minister Brian Reinhart, Class of 2023 — and the ministers did their best to help first-year students make the transition from home to college life.

“Residents will confide in us, as I did with my minister, and that meant the world to me because it made Catholic University feel like home. It’s a sense of belonging, a sense of hominess, as well as being this resource for joy and happiness and belonging,” said Christian Bordak-Roseman, Class of 2022, who still keeps in touch with his own House minister from his first year on campus.

Many of the current ministers were inspired to join The House by previous residents — either their own ministers or, in the case of Smyth, her sister, who was also a House minister, and brother-in-law, who was a resident during her first year. They are now part of a chain that reaches back 50 years.

“To see that it’s been 50 years and it’s grown so much, and to see that we’re making an impact on the students — we’re doing something good, and it means a lot to the freshmen, and to the whole University community. I think it’s cool to be a part of something like that,” Treacy said.

“It’s crazy to think about how many ministers have walked before us. We can think of our own ministers, and it reaches further and further back,” said Bordak-Roseman, adding while the spaghetti dinners don’t happen anymore, there are still community meals and other gatherings that echo back to previous House generations. “We’ve grown and we’ve changed and we’ve diversified and done so many new things, but we always come back to that cornerstone, which is this idea of community.”

“It makes you realize that you are a part of something much bigger. It’s not really about us as individuals, but rather the way God is working through the entire ministry community. It’s a bonding experience that we’ll always have. We’re really blessed to be a part of it,” Smyth said.

As The House looks forward, today’s ministers are hopeful that the tradition will carry on its mission of faith and hospitality for the next 50 years.

Said House Minister Clare Delmore, Class of 2023, “We have this space, and we want it to continue to be the community’s.”