On the Front Lines: Social Workers at the Ready

At social service agencies in Washington, D.C., alumni of the National Catholic School of Social Service are leading programs to assist vulnerable populations at increased risk due to the pandemic.

Catholic Charities of the Archdiocese of Washington

Wearing a baseball cap, surgical gloves, and a face mask decorated with pink flamingos, Bridget Maley, B.S.W. 2014, M.S.W. 2017, squinted as she surveyed a table covered with loaves of bread and boxes of groceries. Folks carrying bags or pushing small grocery carts were lined up near her outside Sacred Heart School in Washington, D.C.’s Mt. Pleasant neighborhood.

More people, chatting in Spanish, joined the line, which eventually stretched all the way around the block on a breezy weekday last May. A nearby sign displayed the words “stay safe.” The adjacent neighborhood of Columbia Heights was a hot spot for the novel coronavirus.

As the pandemic tightened its grip on the capital region, Maley, manager of Catholic Charities’ immigrant support services team, was among D.C.’s countless social workers putting in long hours to support the city’s most vulnerable populations. In the process, they learned about resilience from people who had weathered the trauma of poverty and homelessness long before the pandemic.

Maley worried about the long-term impact of the pandemic on the people she serves. Many are Hispanic and work in service industries, such as restaurants, hard hit by the economic downturn resulting from the virus. In those neighborhoods, large families living in small apartments were more susceptible to COVID-19.

“The pandemic is affecting everyone, but it’s especially hard for the people we work with,” Maley said. “They’re really struggling, but that doesn’t make it any easier for them to ask for help.”

Typically, Maley and her team of seven help their clients with applications for jobs, housing, and unemployment and food assistance benefits. When COVID19 started spreading in D.C. last March and the city went into lockdown, they were fielding 30 to 40 calls a day from people seeking unemployment benefits. In addition, Maley and her director took over the food distribution program. They were coordinating deliveries of groceries to Mt. Pleasant from D.C.-area churches, food banks, and other service organizations. In late March, she sent an email about the food program to community service providers. Word spread quickly throughout the neighborhood and the next day the line for groceries stretched for blocks. By late May, the Catholic Charities team in Mt. Pleasant was giving out between 500 and 550 boxes a week.

Maley admitted that she cries at least once a week, in part, “because it can be hard to live in this reality.” But also because she’s inspired by the resiliency and solidarity of the community she works with. Many of the clients receiving food are now helping to distribute groceries.

At SOME headquarters on O Street in Northwest D.C., about two miles from the University campus, the dining room provided takeout rather than sit-down meals for clients. Anne DeGirolamo, M.S.W. 2005, director of SOME’s outpatient program for clients with substance abuse disorders, said she stopped taking the bus to work from her home in the nearby H Street Corridor. Instead she walked and put on her mask as she approached O Street.

SOME is an interfaith, community-based organization dedicated to alleviating homelessness by providing food, showers, and other basic needs, as well as health care, social services, job training, and housing.

While she was working on her master’s, DeGirolamo had a field placement with the program she now runs. The placement introduced her to the world of mental health substance abuse providers, where she found her niche.

In 2011, she became the National Catholic School of Social Service (NCSSS) liaison between master’s students seeking field placements and D.C. area social service organizations like SOME. She describes her work at NCSSS as “paying it forward” for the ways that her fellow social workers have inspired her, especially during the pandemic.

As SOME implemented regular temperature checks and provided masks and gloves for clients and staff, challenges cropped up, such as social distancing at a place where several people were living. But clients stepped up, constantly cleaning, complaining in a good-natured way about their dry hands, and offering encouragement to staff members, said DeGirolamo.

She and her team are in touch with their clients often, knowing that many of them are dealing not only with addiction but also trauma and underlying mental health issues. When she finds herself anxious about the pandemic, DeGirolamo said she “leans” on her faith and looks to her clients for support. “If anything, I think the challenge of the pandemic has made their resolve even stronger. If they can show up, I can show up.”

As the pandemic hit in early March, many organizations had to close down or curtail services to ensure public safety. Miriam’s Kitchen remained open for essential services using safety measures prescribed in a new age of physical distancing.

“Our CEO felt that as so many other sites were closing, Miriam’s Kitchen needed to be available to people experiencing homelessness to provide warm meals, clothing, sleeping bags,” said M.S.W. student Paul Rahn. “It was a stripped-down version, serving our community in outdoor tents.”

Rahn’s field placement at Miriam’s Kitchen was cancelled in March due to the COVID-19 crisis. He had been involved in case management. “I spent a lot of time in the dining room, getting to know our clients,” he said, “so that I could assess needs in order to connect them with appropriate services.”

Rahn chose to stay on as a volunteer. Although he had a “natural level of concern” about his safety, he said, “As someone not in high-risk health categories, I felt called to be there for those who don’t have a home to isolate in, whose basic hygiene needs are not being met, who are hungry.”

Several NCSSS alumni are on staff at Miriam’s Kitchen, including Sara Taylor, M.S.W. 2018, a program manager. She said the guests she serves experience high-order as well as basic function needs. “Self-actualization and meaningful relationships don’t stop mattering because you sleep outside.”

Referring to clients as guests reflects the organization’s emphasis on its “space of welcome” and relationships centered on the whole person, noted Taylor. Dedicated to ending chronic homelessness in D.C., Miriam’s Kitchen provides nutritious meals, case management, and housing combined with support services.

These days, most of her interactions with guests are by phone or computer. But on Tuesdays Taylor delivers food, calling ahead of time to let them know she’ll leave it outside either in a parking lot or on the pathway leading to their apartment.

“I think as a team we’ve really gotten very creative connecting with people over the phone,” said Taylor. “We’re not a mental health case management program, but we’re using a lot of the same skills to create a welcoming space for the people we work with.”

The pandemic has reaffirmed Rahn’s decision to become a social worker. “The needs of vulnerable oppressed populations have become even more extreme,” he said. “They need someone to walk with them, to connect them with resources. And even with their suffering, there are joys and blessings. They are capable of some of the most beautiful expressions of gratitude I’ve ever encountered.”

A Social Work Commander Serves at the Epicenter 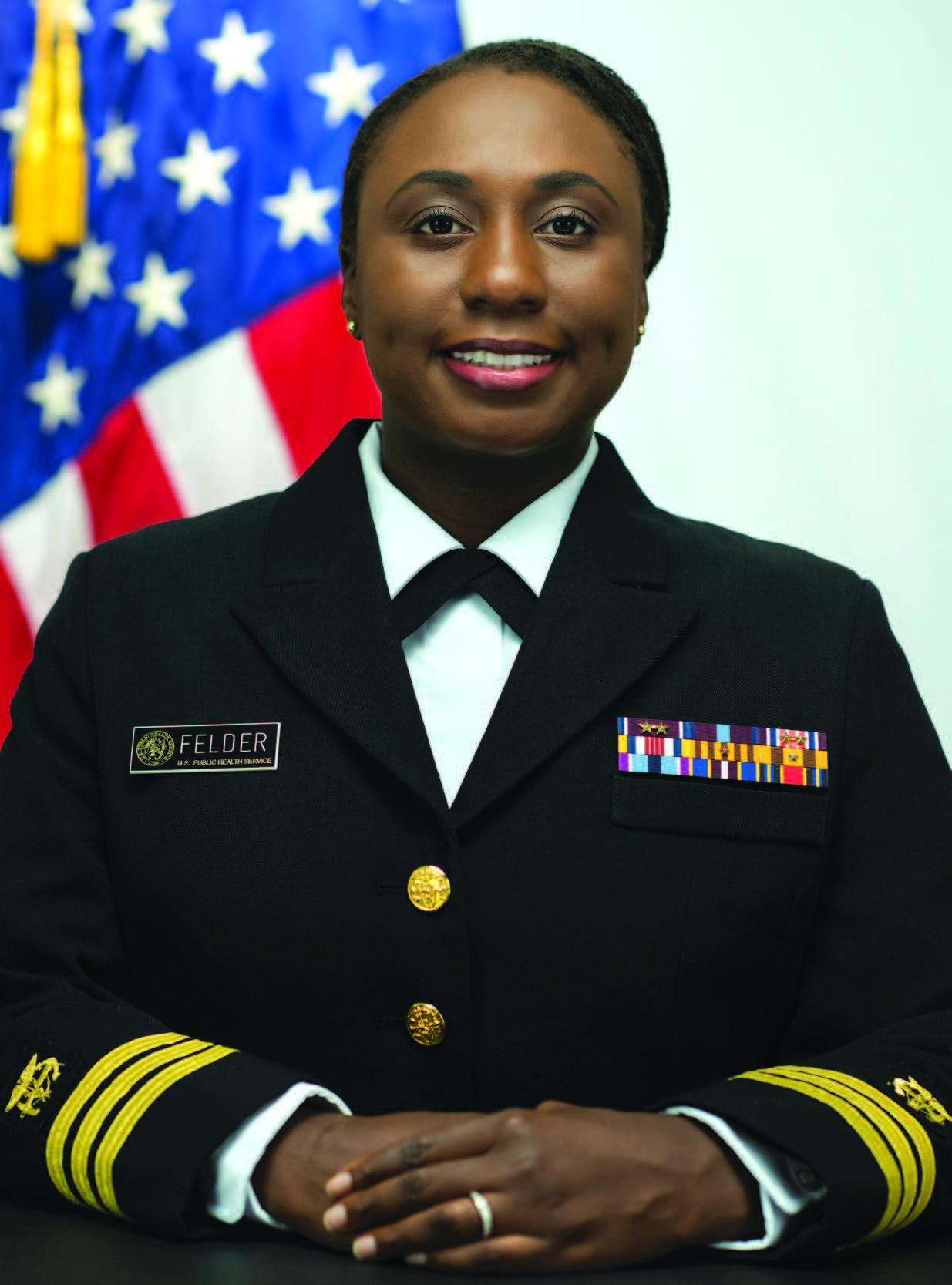 As an officer in the U.S. Public Health Service, Commander Stephanie Felder, Ph.D. 2019, has experience serving during times of national crisis. When the COVID-19 pandemic reached crisis levels in some parts of the United States, Felder knew she might be deployed. On March 25, she had just finished a workout when she got an email notifying her she was needed at the epicenter of the outbreak. Felder was appointed Behavioral Health Officer in Charge at the Javits New York Medical Station (JNYMS). The Department of Defense-run care facility was quickly being set up at the 760,000 square-foot Javits Convention Center on Manhattan’s Eighth Avenue overlooking the Hudson River.

“I felt a mix of eagerness to serve and anxiety about what I would face,” recalls Felder. “As a member of the corps, I served in leadership roles in 2017 for Hurricane Harvey, in 2018 for Hurricane Florence, and in two 2019 humanitarian missions along the U.S.-Mexico border. However, faced with COVID-19, I asked myself, ‘Are you really ready for this mission?’ I knew this would be uniquely challenging, yet rewarding.”

Felder led a team of more than 30 service members including psychiatrists, psychiatric nurses, psychologists, licensed clinical social workers, and behavioral health technicians. The team provided behavioral health support to more than 2,500 staff and patients within JNYMS, as well as support for mortuary affairs and outlying hospitals.

Felder’s career as a social worker began when she was working in juvenile justice, and then with homeless veterans. In 2012, she made “the two most impactful career decisions of my life.” She joined the USPHS and began her doctoral program at NCSSS.

She called her experience at Catholic University “nothing short of amazing. The program teaches you how to become a researcher, teacher, and administrator from a framework solidified in social justice, integrity, and service.” When Felder received her Ph.D., she was asked to speak at the NCSSS commencement ceremony. She shared that she was the daughter of a South Carolina sharecropper who did not complete grade school. Her father passed away in 2008. Her mother, sister, and other family members attended. “It was emotional for all of us. I grew up watching my family work in tobacco fields,” said Felder. “I was a first-generation college student speaking as a leader in the Surgeon General’s cadre and as a newly minted Ph.D. recipient. I told them I didn’t do it alone. These professors pushed me to my limits and then asked me to go just a little further.”

It was hard not being with her husband in Silver Spring, Md., and knowing she was the center of family worries during the fast-moving pandemic, she said. “I was needed most in New York. It was rewarding serving this resilient city during such harsh times. And it was an honor to serve alongside the USPHS, the Army, the Navy, and National Guard — being part of the ‘one team, one mission, one fight’ every day.”

The field hospital at the Javits Center closed in May as New York City began to show declines in its daily rate of infections and deaths. Felder headed home to Maryland, where she quarantined for 14 days before being reunited with her husband. She says she holds close one memory in particular.

“I was just re-entering the building from a short self-care walk, when I heard the call to attend a ceremony for a veteran who had passed away,” she recalls. “I rushed to the area where the ceremony was being held. I became part of a sea of uniforms — USPHS, Army, Navy, New York first responders — standing at attention. I didn’t know this veteran but to be part of his last salute is an experience I will never forget. The gravity of what we were all doing there in New York hit me. It was emotional. It was an honor and it was humbling.”