A panel of journalists representing decades of reporting for The New York Times and The Washington Post sat down with intelligence professor Nicholas Dujmovic this week at Catholic University to discuss coverage of the intelligence community, accountability, ethics, and the public’s “right to know.”

In conducting intelligence activities, “accountability is a vital element,” Dujmovic said in his introduction. And ultimately, he said, “U.S. intelligence has to be accountable to the American people.”

In order to win full support of the public at large, American intelligence must be understood by the people. This is where reporters play a large role: writing the stories that inform the general public. And, though it was somewhat hard for him to admit, “That role, I’ve come to believe, is usually positive,” Dujmovic said.

“I think the CIA ... like a lot of institutions in Washington, sees that it has long term institutional interest … in having the public understand what it does and how it does it,” said Steve Coll, the dean of Columbia University’s Journalism School and a former correspondent for The Washington Post. Coll calls this a “survival strategy” in Washington — that is also practiced by other national security agencies — that requires communication and goes through “seasons” of openness and strategic communication, and more “slam down the phone” eras of public affairs. 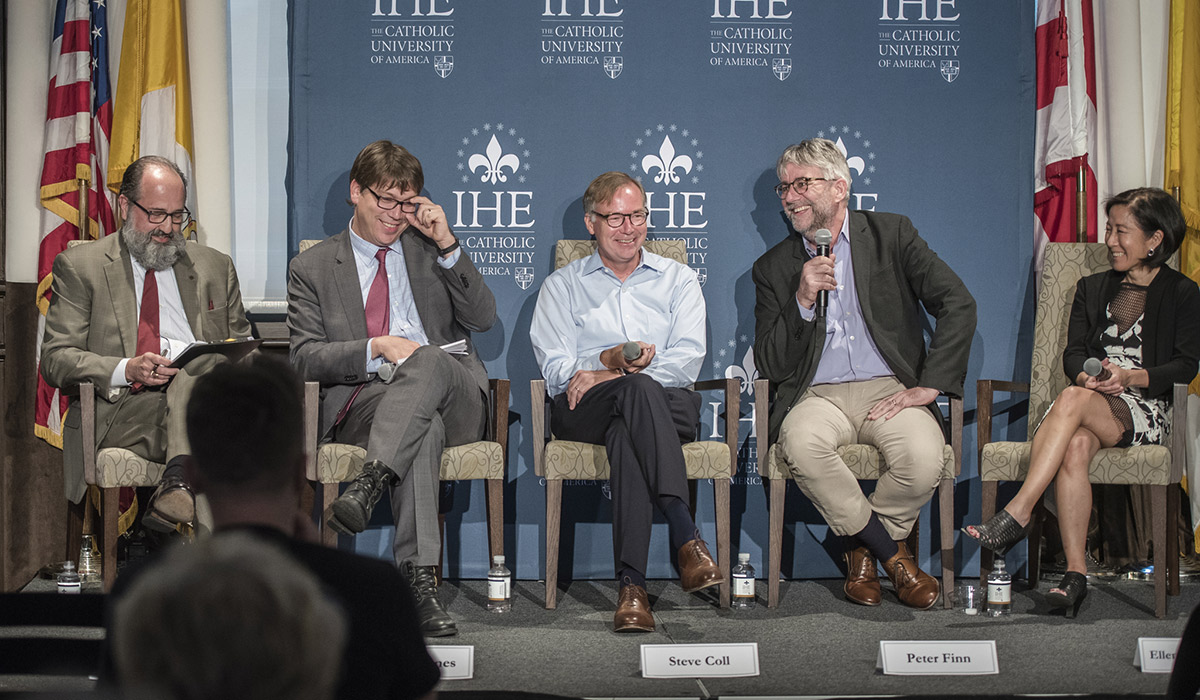 There is an educational and informational role played by intelligence agencies in Washington, but the intelligence reporters and foreign reporters need to work together.

“If we’re relying exclusively on what we can learn here on drone operations in Pakistan or Afghanistan, that’s wholly inadequate,” said Peter Finn of The Washington Post. “We need to be out there talking to people on the ground, talking about civilian casualties, talking about collateral damage.”

Ellen Nakashima of The Washington Post said it’s important not only to report simply what is happening in regards to U.S. intelligence, but also to consider on any issue “the larger and deeper trends … exactly how significant and severe is this threat?” Is the U.S. overreaching and/or stigmatizing certain groups when targeting them for intelligence information? It’s a balancing act, she explained.

Dujmovic asked the panel how competition among news organizations drives the publication of intelligence stories.

“None of us like to get beaten by the other,” Finn said. “We are all out there working sources, talking to people trying to develop information, trying to confirm it, trying to get it into publishable form so that we can get it out first.”

But, added Coll, “The Times, the Post, the Wall Street Journal; for all the competitive juices that flow … they’re in it for the long run. Their mantra is that they’d rather be right than first.”

Alternatively, he says, “There’s another advantage of the competition that’s probably more apparent to journalists than to audiences, which is that well-resourced, well run, ethically driven but highly competitive newsrooms — having more than one of them — actually keeps each of the newsrooms honest.”

“Ellen and I are in fierce competition on the cyber beat,” Julian Barnes of The New York Times said, referring to Nakashima. “If you look at our reporting over the last year, we are building on each other’s stories. I think you see, in competition, us pushing toward the truth; pushing for the public to know something they need to know about how the government is defending election infrastructure.”

During the Q-and-A following their discussion, the panel was asked how the 24-hour news cycle has affected their reporting. Although it’s difficult to “let go” of a scoop, “In no case will we lower our standards,” Barnes said.

With the breadth of reporting that is taking place at such a fast pace, Finn suggests that “Ultimately, we all have a responsibility to educate ourselves; to have a broad diet of news that we read and consume.”

This was the fifth event cosponsored by the Intelligence Studies program and the Institute for Human Ecology at Catholic University. To learn more about the University’s Intelligence Program, see this feature in the Fall 2019 CatholicU magazine.

— Mary McCarthy Hines, director of communications and media relations, can be reached at mccarthym@cua.edu.