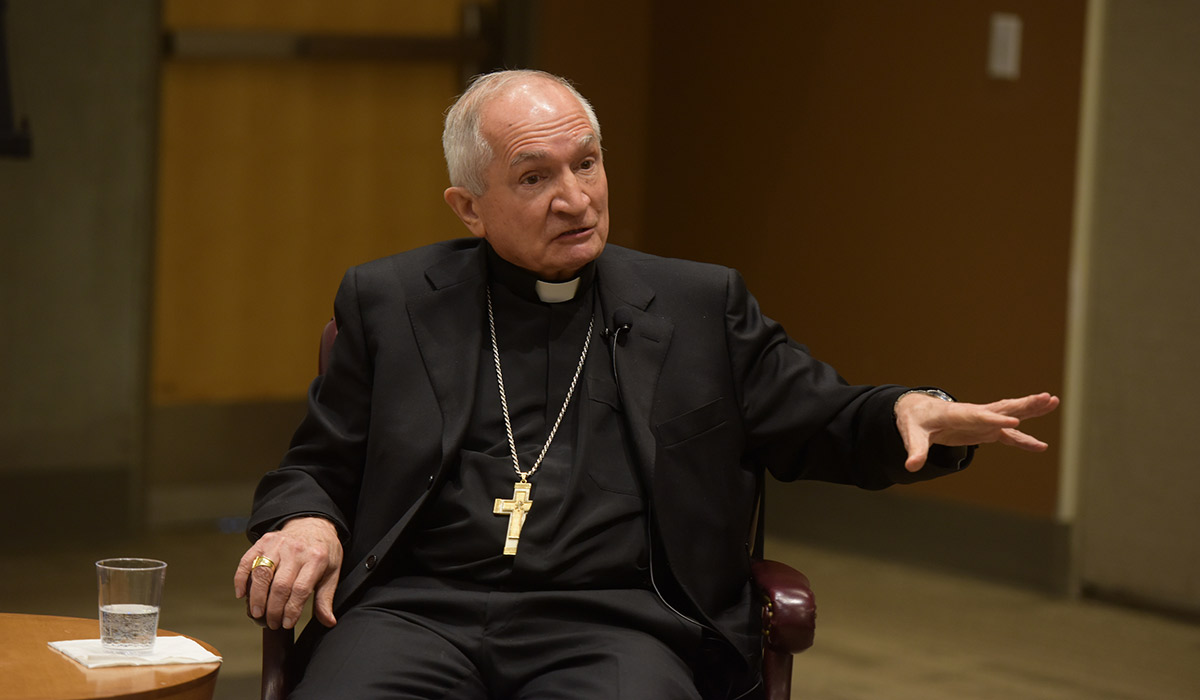 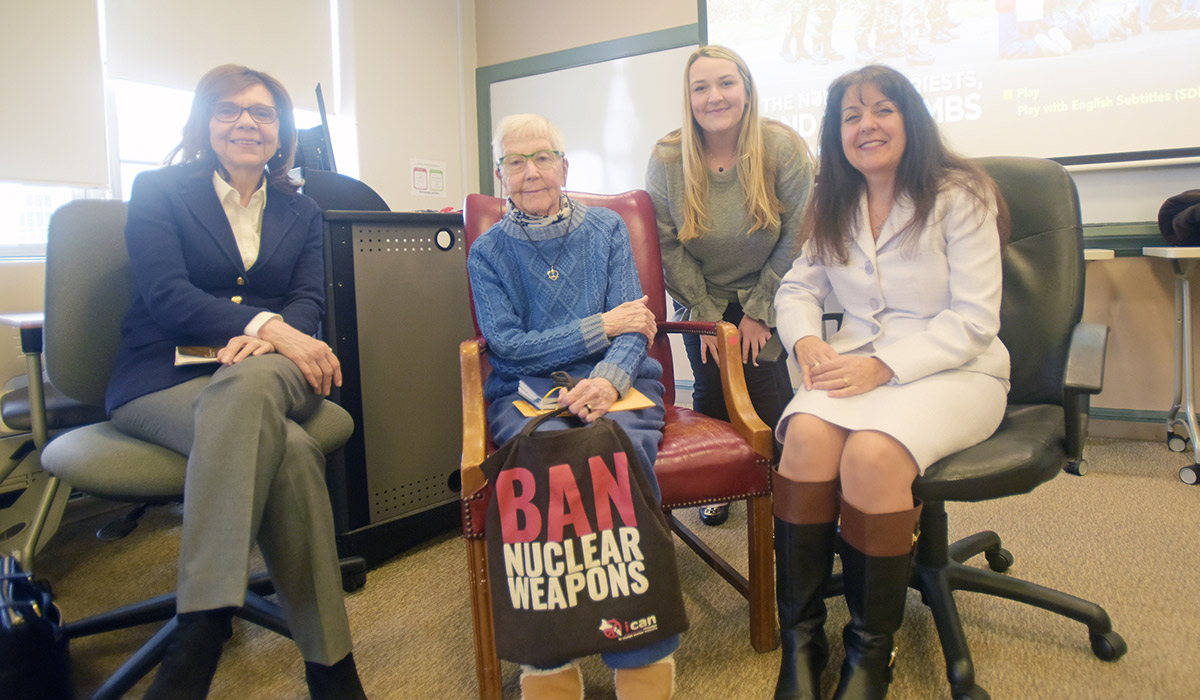 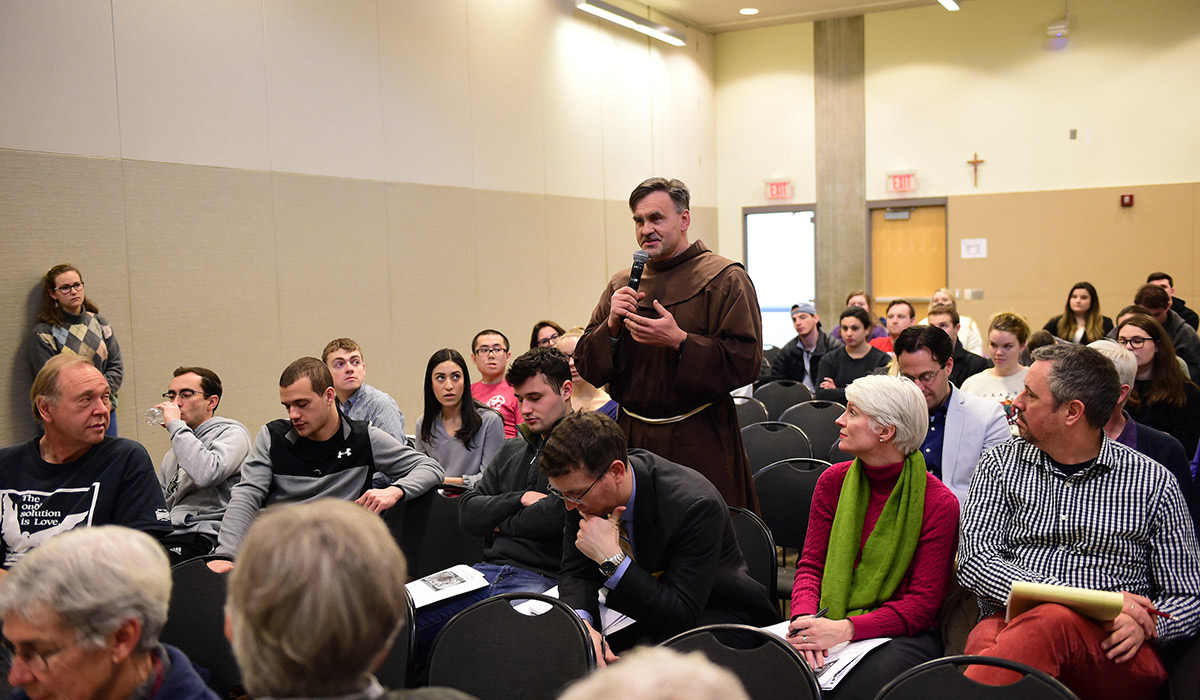 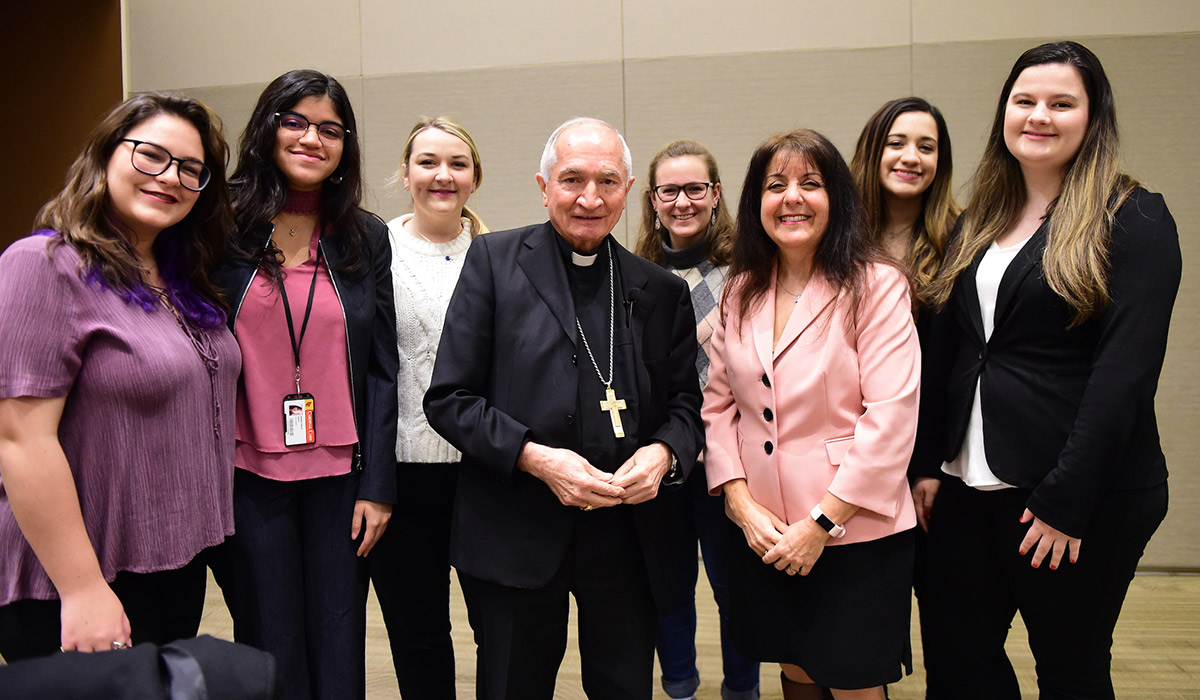 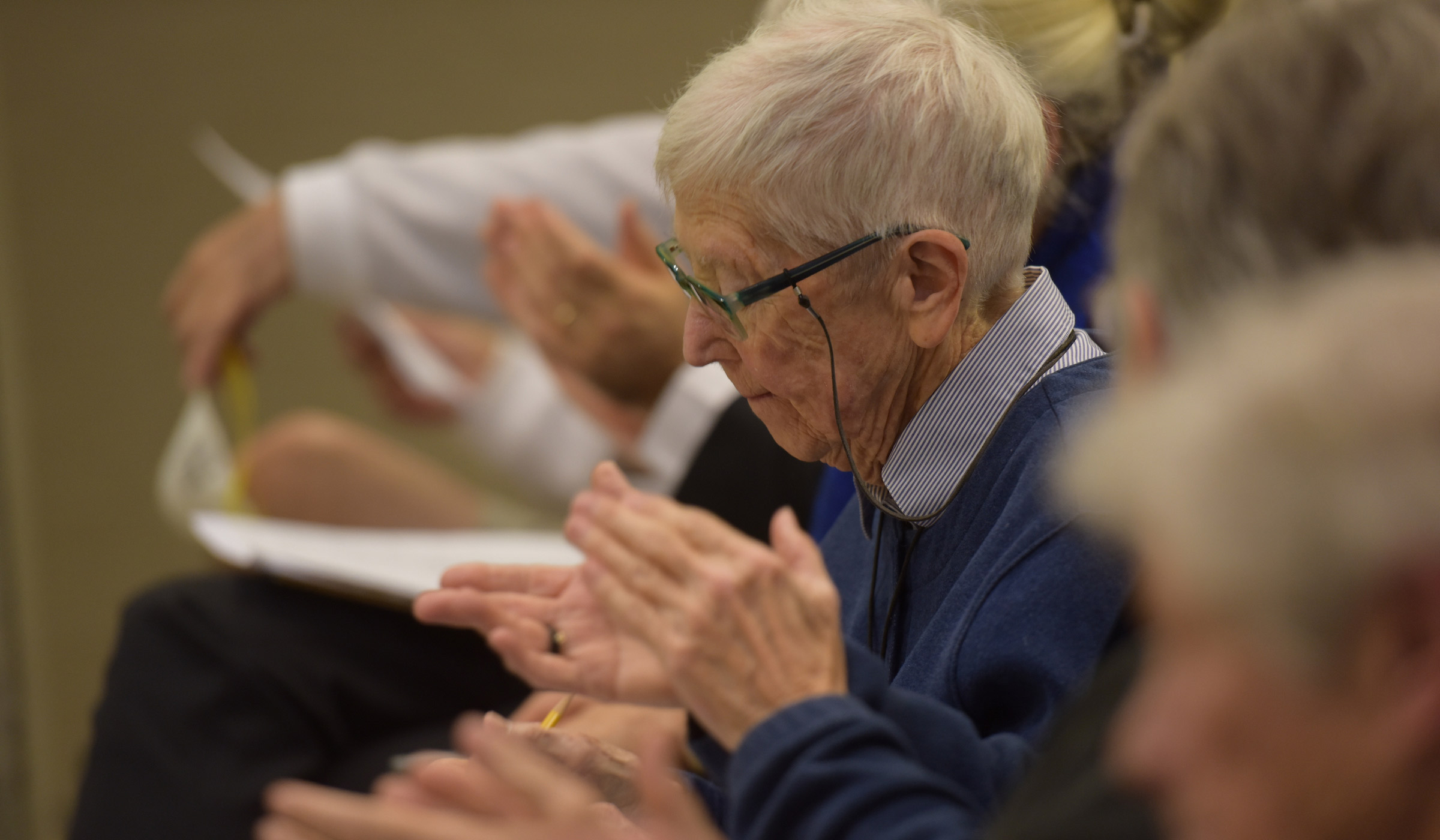 “A world of peace, free from nuclear weapons, is the aspiration of millions of men and women everywhere,” said Pope Francis, during a November visit to Hiroshima and Nagasaki in Japan. “To make this ideal a reality calls for involvement on the part of all.”

The question of how Catholics can work to eliminate nuclear weapons was at the heart of a week of programming at Catholic University planned by Maryann Cusimano Love, associate professor of politics, in January. As part of what Love dubbed “Catholic Nuclear Disarmament Week,” students heard perspectives from nuclear disarmament activist Sister Megan Rice and Archbishop Silvano Maria Tomasi, the Holy See’s Secretary of the Dicastery for Promoting Integral Human Development.

Love said the discussions provided students an opportunity to learn how Catholics can work for peace on both the activist and diplomatic level.  A small group of Catholic University students also participated in the Young Leaders Initiative of the annual Catholic Social Ministries Gathering in Washington, D.C., where they learned about Catholic teaching and initiatives on a variety of public policy issues, including nuclear disarmament.

“We’re blessed here at Catholic University to be at the intersection between Church and state, with many opportunities to bring these experts to our students,” Love said. “It’s one thing to read about current issues in a book, but it’s another thing to actually meet the people involved and be able to ask them questions.”

Sister Rice spoke to students alongside Emmy award-winning journalist Helen Young following a screening of Young’s documentary “The Nuns, the Priests, and the Bombs,” on Jan. 28 and 29. The documentary describes the political actions taken by Sister Rice and other Catholic activists to protest the United States’ large nuclear weapons arsenals.

In 2012, Sister Rice made national news after breaking into the Y-12 National Security Complex in Oak Ridge, Tenn. In a peaceful demonstration, she and two other activists prayed, splattered their own blood, and wrote anti-war slogans on the walls of nuclear weapon holding facilities. Sister Rice, who was 82 at the time of the protest, was later sentenced to almost three years in federal prison and was released two years later, in May 2015.

In the movie, Sister Rice explains that she was inspired to participate in the protest thanks to the inspiration of Dorothy Day and her involvement in the Plowshares movement, which is derived from the biblical passage, “They shall beat their swords into plowshares.” She and her fellow activists work to convince lawmakers to use federal war funding currently allocated for nuclear weapons for purposes that better serve human dignity.

Following the film, Sister Rice, now 90, spoke about the rising threats of nuclear weapons, which have only become more powerful and numerous. Currently, there are an estimated 14,000 nuclear warheads in existence around the world, with more than 90% of the inventory belonging to the United States and Russia.

“The bombs today are 1,000 times as powerful as when they were first used in Nagasaki and Hiroshima,” she said. “They really symbolize the end of life as we know it and the end of the planet.”

Sister Rice also spoke about her passion for nonviolent action, calling it “a discipline we all need to continue to grow in, which takes contemplation, meditations, practice, and dialogue.”

Archbishop Tomasi, who serves as one of the pope’s closest advisors, spoke on Jan. 30 about Vatican diplomatic efforts for disarmament and the role the Catholic Church can play in abolishing nuclear weapons. In 2014, Archbishop Tomasi invited hibakusha, Japanese survivors of the nuclear bombings of Hiroshima and Nagasaki, to share their stories during a conference in Vienna about the humanitarian consequences of nuclear war. During that conference, members of the assembly formed a committee to draft a Treaty on the Prohibition of Nuclear Weapons, which was later approved by 122 countries at the United Nations in 2017.

“The suffering of the people who were victims of the bombs is an argument that touches a lot of human beings,” Archbishop Tomasi said. “Nobody could argue against their testimony about the humanitarian consequences of the detonation of atomic weapons.”

Archbishop Tomasi also spoke about the long-lasting environmental impact of both nuclear testing and detonations, which have led to increased migration and conflict around the world. He advised Catholics to look at the issue in full context, considering how funds allocated for nuclear weapons could be channeled in more positive ways to support integral human development worldwide, by improving education and economic growth in developing countries.

“The issues we are dealing with are not Catholic issues, they are human issues; the survival of the human family is at stake, so everybody should be involved to prevent disaster,” he said. “If we don't live a culture of life with a respect for human rights and peaceful coexistence, it is difficult if not impossible for governments to make the decisions or put into practice the goals we have set for ourselves.”

Love’s work on these issues is part of her research project “God and the Bomb: Just Peace and Nuclear Weapons,” examining the impact of religious actors and factors on nuclear weapons policy. She has interviewed religious and political leaders in Hiroshima, Nagasaki, and the demilitarized zone in Korea, as well as former Cold War “hawks” who now favor deep nuclear disarmament, such as President Ronald Reagan’s Secretary of State George Shultz and former defense secretary William Perry. Part of her research is being published in two edited volumes forthcoming from Georgetown University Press, coinciding with the 75th anniversary of the Hiroshima and Nagasaki bombings.