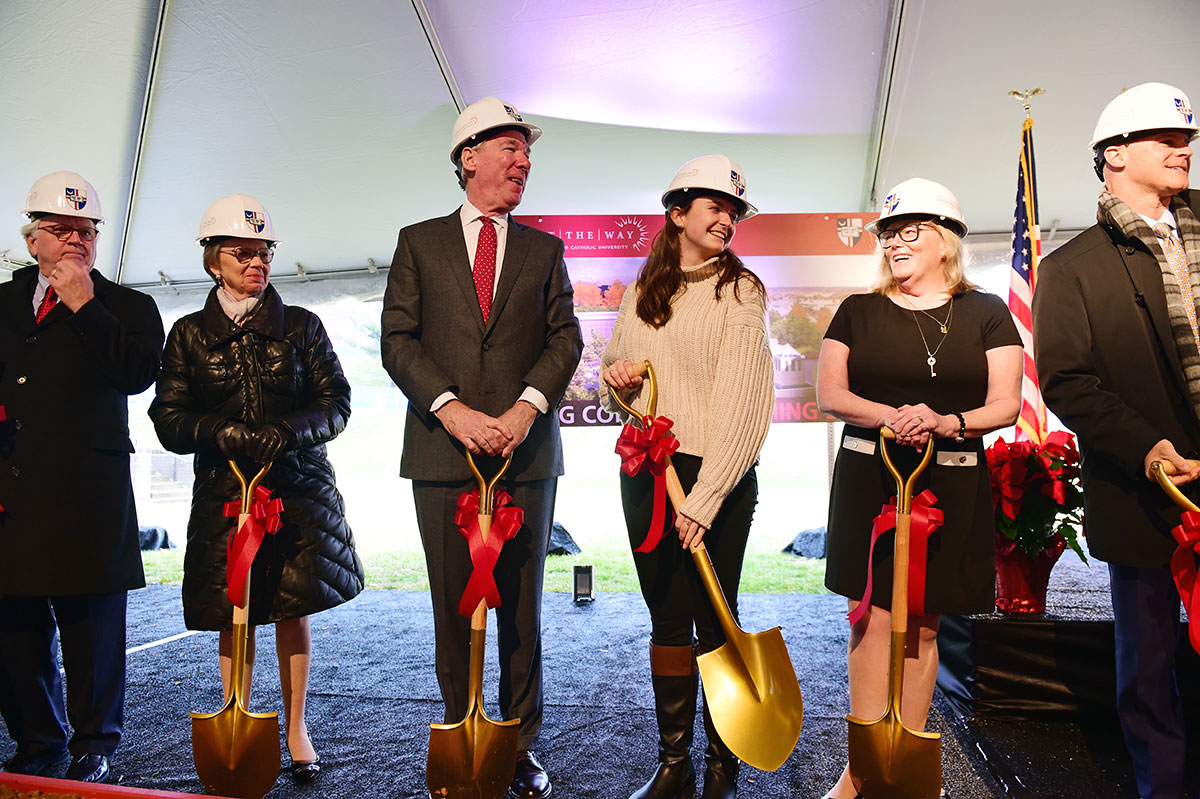 December 9: Catholic University broke ground on a new project that will impact the daily lives of students for years to come. The Student Dining Commons, which is expected to be completed in early 2021, will be built at the north end of the University lawn where Magner House once stood. The symbolic groundbreaking for the building took place on the University lawn and included University faculty, staff, students, trustees, and patrons. The student dining commons will be constructed thanks in part to an $8 million anonymous donation. The $8 million gift is part of Light the Way: The Campaign for Catholic University, a $400 million comprehensive campaign. (Photo by Patrick Ryan) 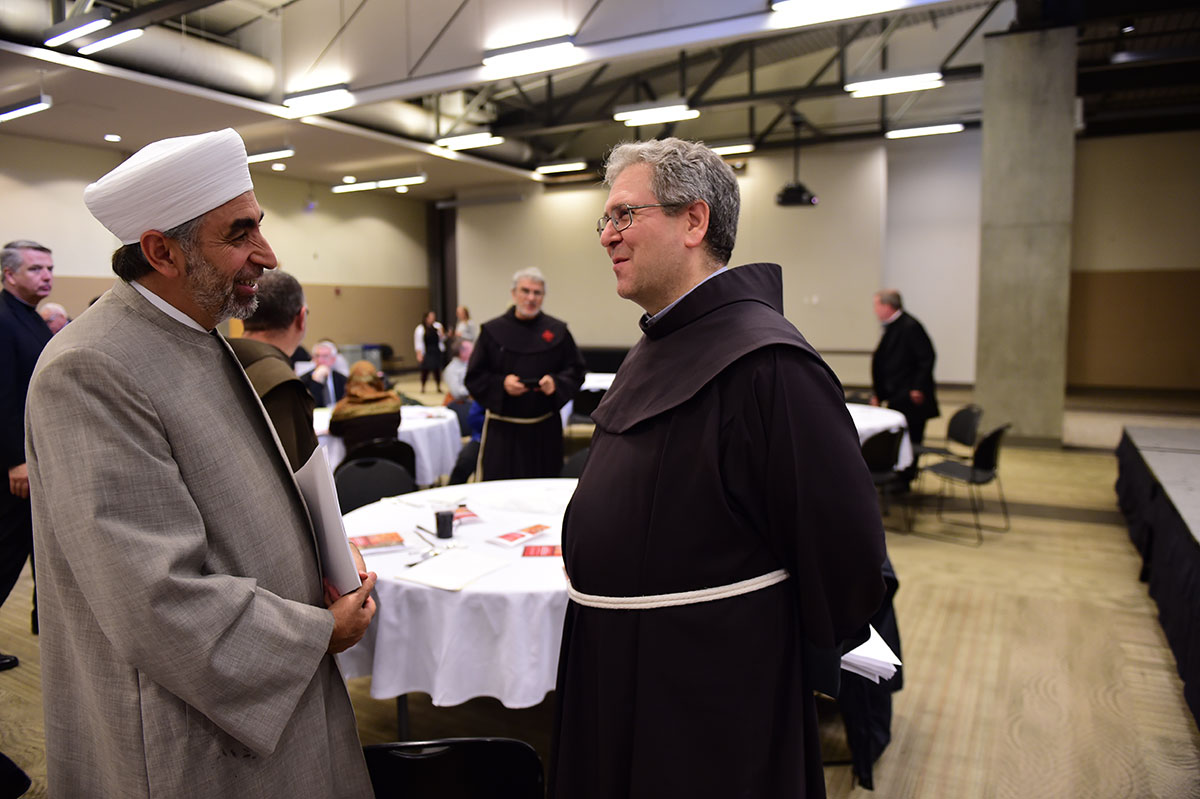 November 7: Imam Mohamed Bashar Arafat and Rev. Francesco Patton chat during an all-day seminar to mark the 800th anniversary of the meeting between St. Francis of Assisi and Sultan Sultan Malik Al-Kamil during the Fifth Crusade. The seminar, titled "The Sultan and the Saint: The Spiritual Journey of Transformative Encounter," brought together Catholic and Muslim scholars and religious leaders gathered to examine the historical context for the meeting, its legacy, and what it can teach Christians and Muslims seeking similar encounters in interreligious dialogue today. (Photo by Patrick Ryan) 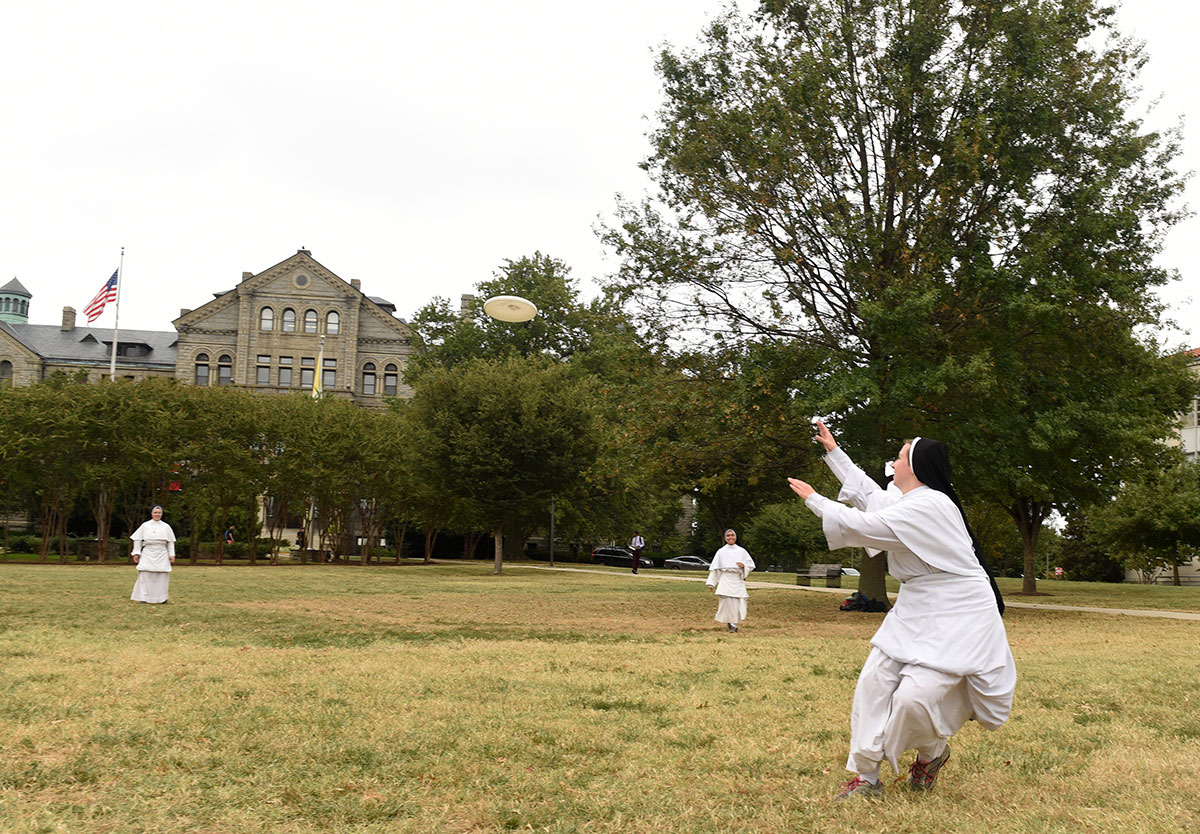 October 3: A group of religious sisters playing Frisbee on the lawn in front of McMahon Hall during lunchtime. The sisters are part of Campus Ministry’s Priest/Religious-in Residence program in which priests and sisters live in student residence halls to foster a greater understanding of priestly and religious vocations. (Photo by Patrick Ryan) 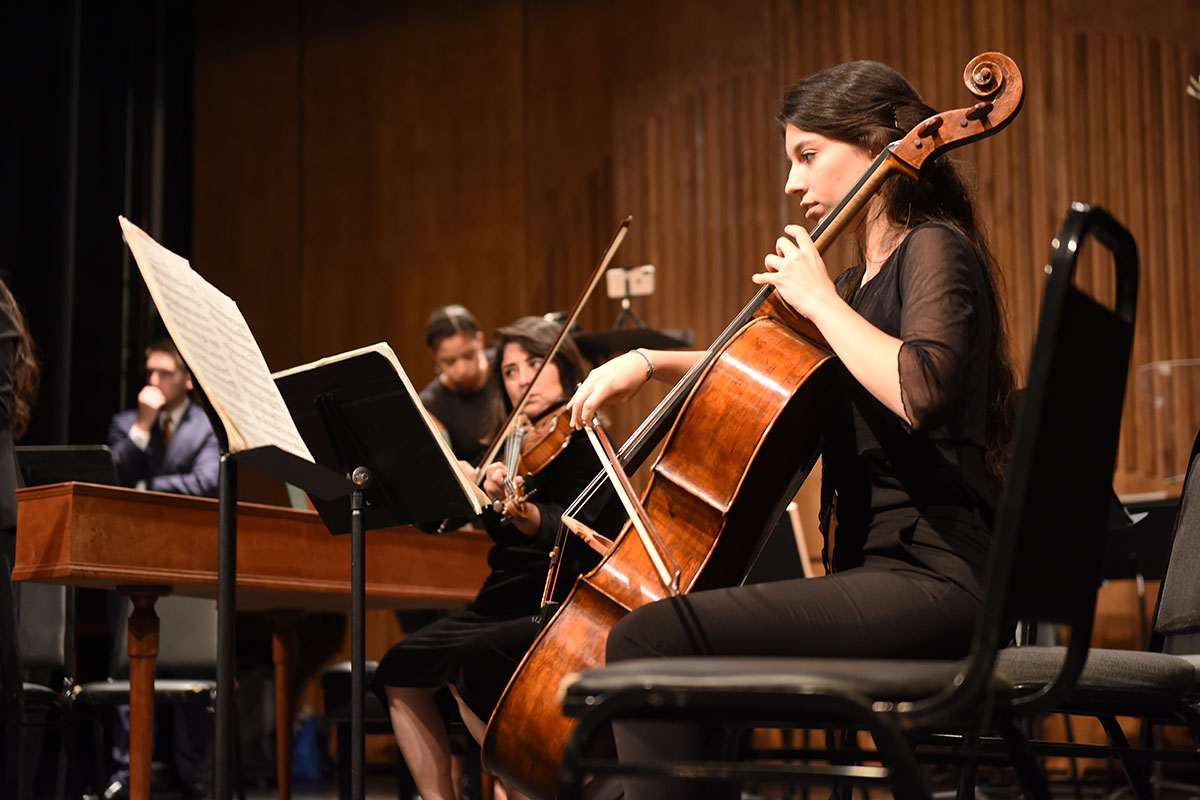 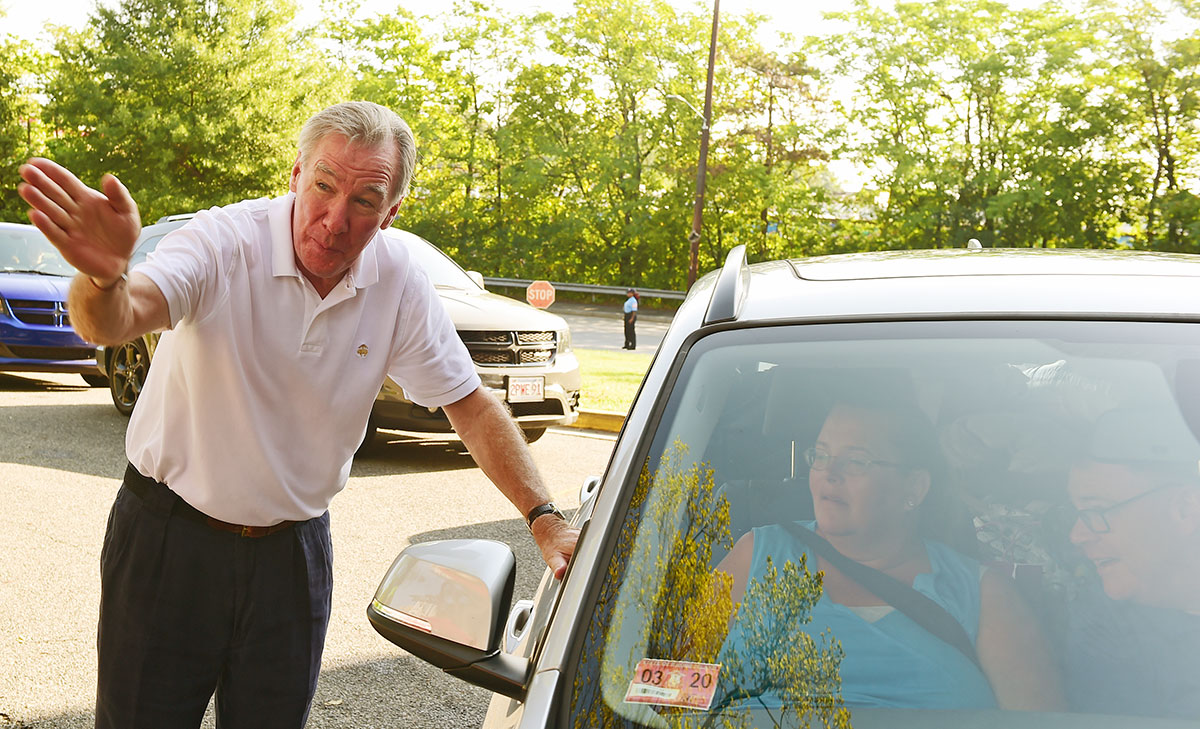 August 22: President John Garvey gives directions to a student's family as the Class of 2023 moves into the residence halls at Catholic University. The new class of approximately 830 students hailed from 39 states; Washington, D.C.; and Puerto Rico. (Photo by Patrick Ryan) 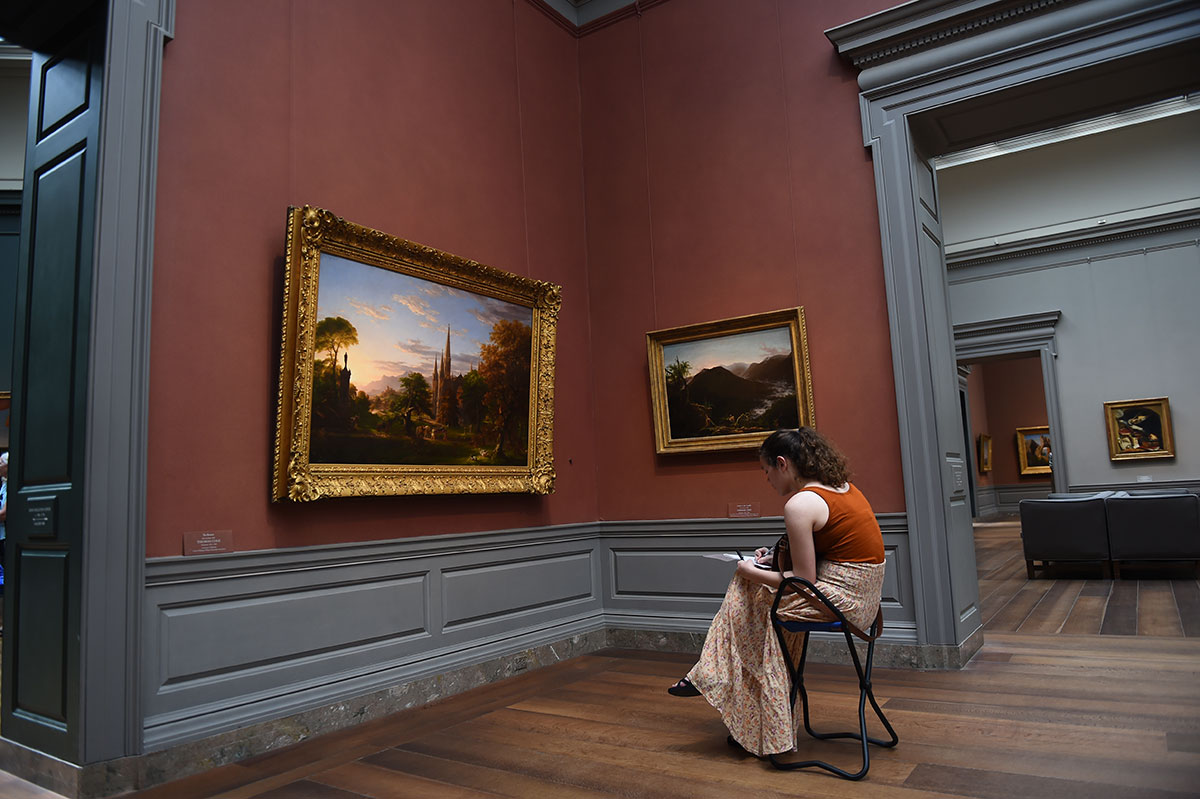 July 10: Students taking part in the Light The World! summer program spent an afternoon studying faith and art at the National Gallery of Art in Washington, D.C. Nora M. Heimann, chair and associate professor of art, led the excursion. Light the World! is a chance for high school students to investigate, research, and learn how faith and culture interact with everyday activities. (Photo by Patrick Ryan) 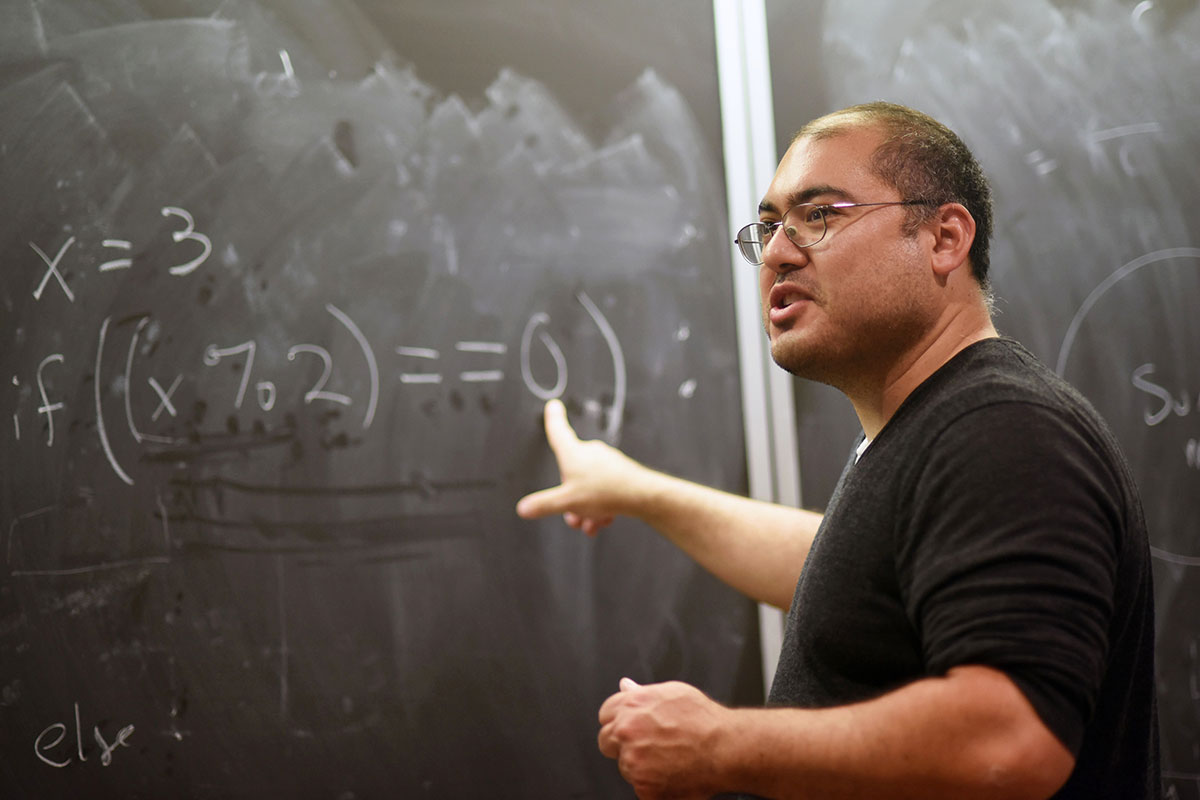 June 24: Assistant Professor of Mathematic Curtis Holliman teaches high school and pre-college students during the Applied Math in Action! summer program in Aquinas Hall. The program teaches students to discover how math can be applied to many different fields. (Photo by Patrick Ryan)

Patrick Ryan became Catholic University's photographer in June. Below he reflects on his experience so far:

"My name is Patrick Ryan. I've been a photojournalist, commercial photographer, photo editor, and director of photography but being the University Photographer at The Catholic University of America is the greatest gig of all. I'm from D.C. so the location means a lot, as does the mission of the University and the history and tradition that goes along with it. I began in June of 2019 and it has been non-stop visually and intellectually stimulating.  What more could you ask for as a photographer? My starting point is a beautiful campus populated with engaged, enthusiastic, and intelligent students to work with. There's something new everyday. The gamut of topics is staggering. One day I might be photographing an ancient Egyptian papyrus in Mullen Library; or a robotic arm in the Engineering Department; or a visiting Cardinal from Ethiopia; or a musical in Hartke Theater; or a seminar on DNA from the foremost expert on the topic; or the women's basketball team collapsing in hysterics as they fail to construct a human pyramid. My job is to record and illuminate all of it — all of the outstanding people and outstanding work that is going on at Catholic. It's a gift to be here to keep an eye on the proceedings. I'm grateful and I look forward to all the compelling images ahead of me." 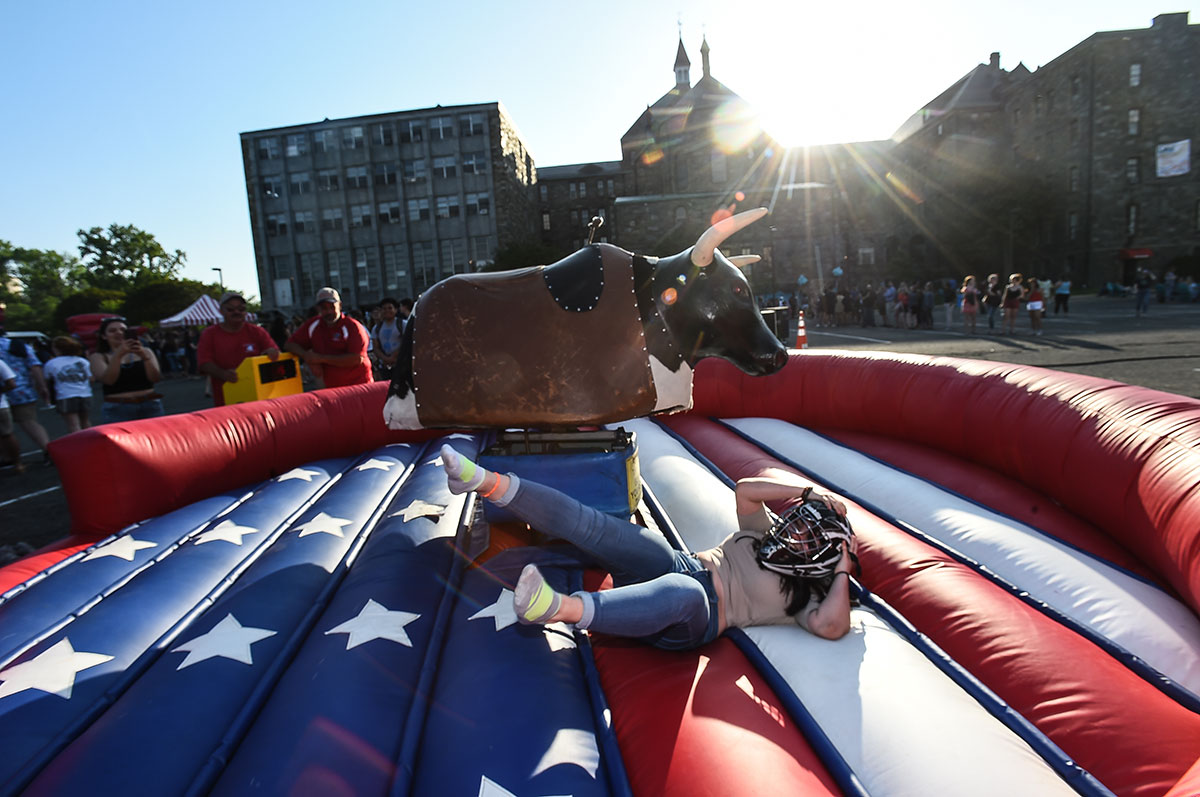 May 3: Students celebrate the last day of classes for the 2018-2019 academic year at Cardinalpalooza with free food, games, live performances, fireworks, and the always highly-sought-after T-shirts. (Photo by Dana Rene Bowler) 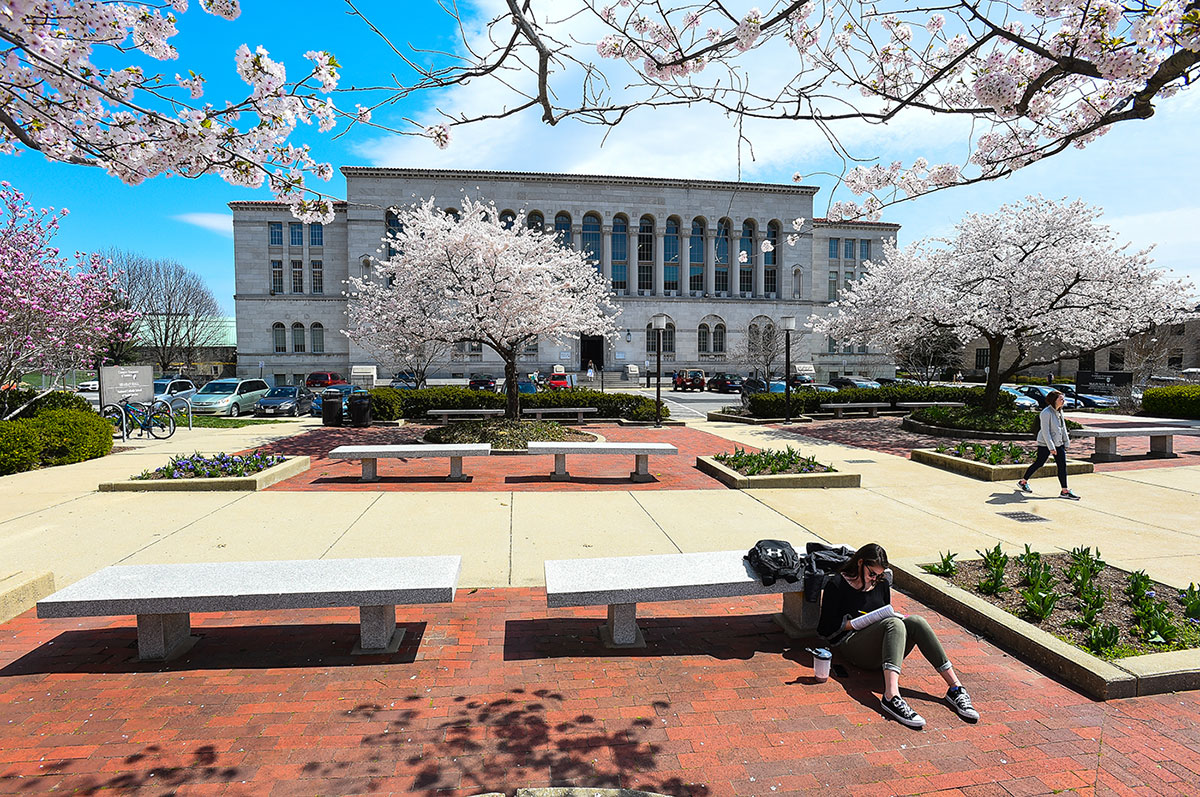 April 9: Spring has sprung on campus with the blooming of cherry blossom trees on Pryzbyla Plaza, framing the John K. Mullen of Denver Memorial Library. Catholic University has the largest, greenest campus in Washington, D.C., with 176 acres filled with more than 1,600 trees representing 200 different species. (Photo by Dana Rene Bowler) 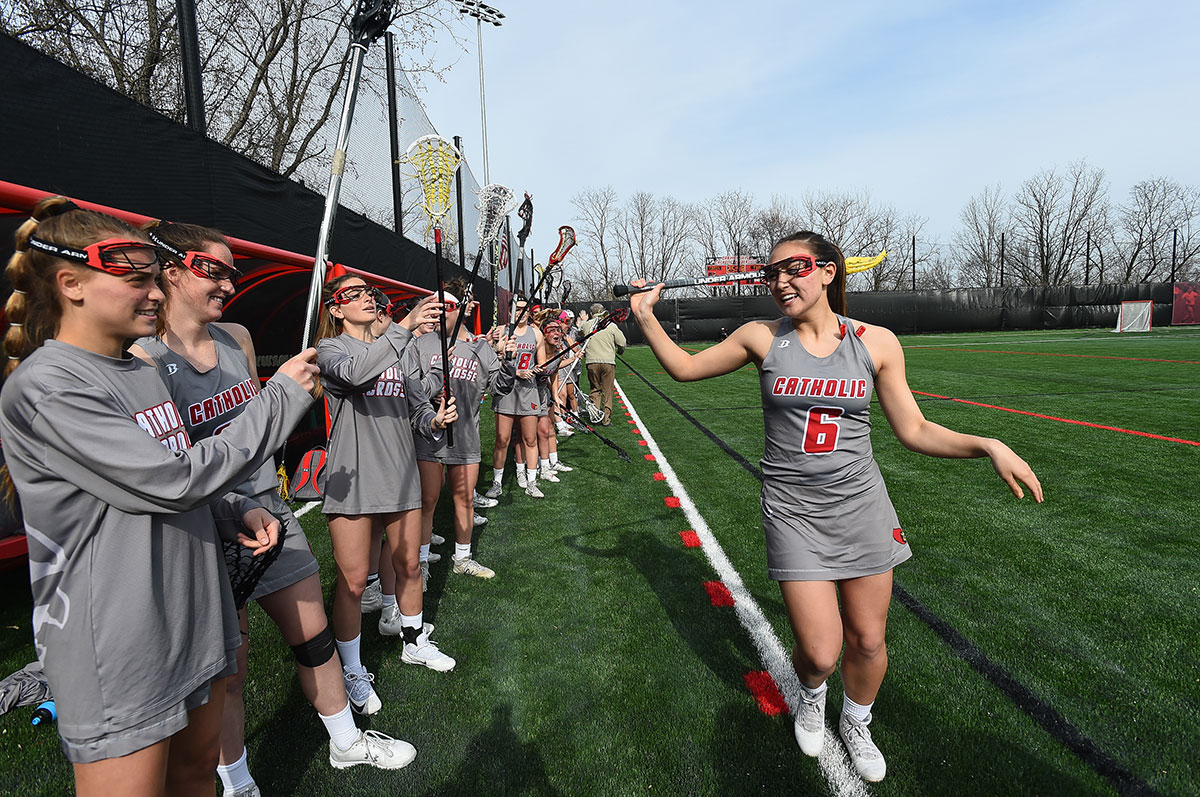 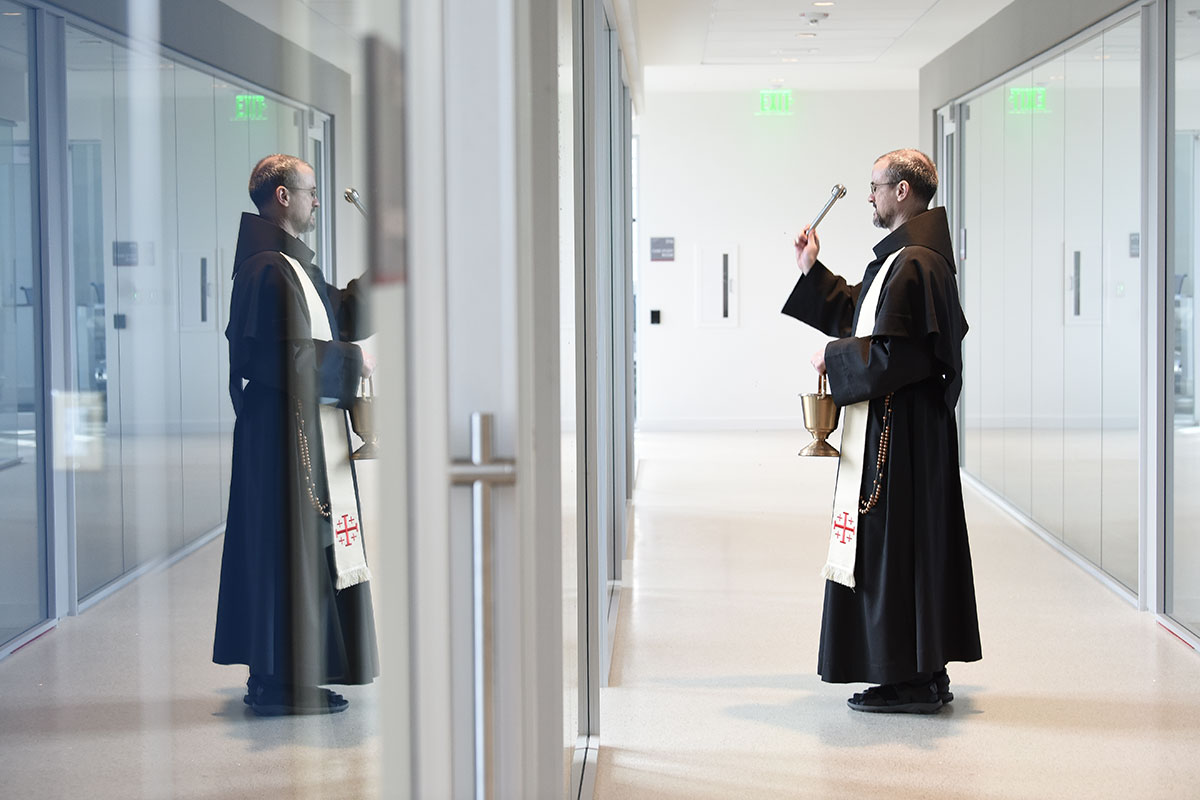 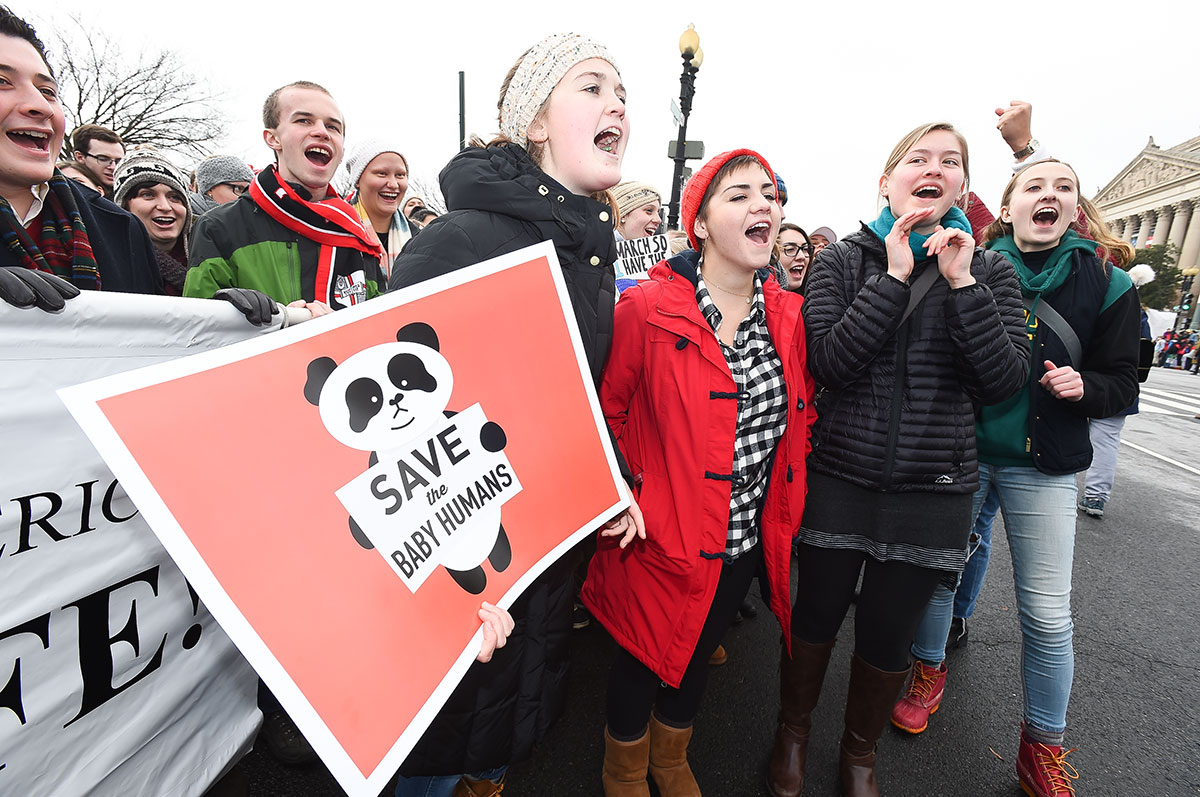 Jan. 18: Catholic University students cheer during the March for Life. This year, classes were cancelled for part of the day to encourage student and faculty participation. Approximately 500 members of the University community participated. (Photo by Dana Rene Bowler)